Can You Eat Pepperoni Raw? 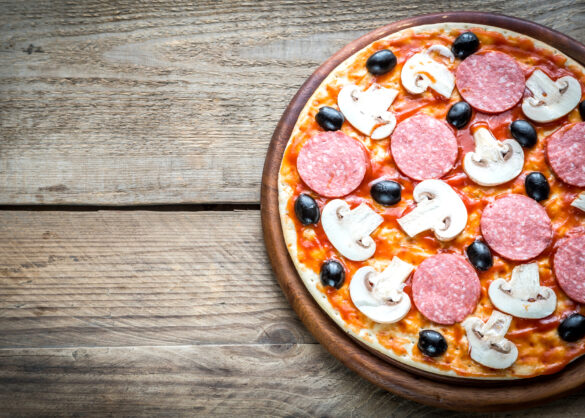 Perfect slices of crisp, tangy pepperoni are a pizza’s best friend, adding a spicy, meaty flavor to our favorite topping combo! We usually eat pepperoni cooked on a pizza, but can you eat it “raw” as well? Or is it only safe to eat cooked?

So, can you eat pepperoni raw? Pepperoni is a cured salami sausage and is safe to eat raw. This is because it has undergone a complex process to preserve the meat and eliminate any bacteria. If you purchase uncured pepperoni, this may not be safe to eat raw, so carefully consult the packaging.

If you’ve only ever had pepperoni cooked on a pizza, you don’t know what you’re missing! Let’s find out everything you need to know about pepperoni, including the best way to eat this delicious sausage without cooking it first.

Pepperoni is much loved around the world and is one of the most popular pizza toppings in many countries. But what exactly is pepperoni and what is it made from?

Pepperoni is a dried, spicy salami sausage made from a mix of beef and pork, which are finely ground and mixed with spices. To obtain the perfect texture, this needs to be a ratio of 70% lean meat to 30% fat.

This mix of ground meat is flavored with seasonings such as salt, sugar, and garlic powder. A generous amount of paprika is normally added for both flavor and the characteristic red color.

The seasoned ground meat mixture is stuffed into sausage casings and then goes through a range of different processes such as curing and smoking. These not only preserve the meat, but also add flavor.

A whole pepperoni is quite a thick sausage, with a deep red color. It should be firm to touch and slice easily without crumbling or falling apart.

You can buy pepperoni sausage either whole or pre-sliced, and it is normally available in most grocery stores and delicatessens.

Pepperoni sausage has a strong and intense flavor, which is why it is normally served in very thin slices. It is also quite chewy, so thinner sections are easier to eat. This is a thick and meaty cured sausage, not for the faint-hearted!

Pizza connoisseurs will be very particular about the thickness of their pepperoni, as this affects the way it behaves when cooked on a pizza!

A thin slice of pepperoni will lay flat on a pizza, and any oil that leaks from the sausage will spread across the surface of the pizza.

A slightly thicker slice will crisp and curl upwards around the edges, creating a cup shape that holds the oil from the pepperoni.

The latter is considered to be the ultimate goal, as the oil gives a soft center to the sausage topping without making the rest of the pizza too greasy. This type of pepperoni even has its own name – cup char pepperoni!

How Is Pepperoni Made?

To understand if you can eat pepperoni without cooking it, we first need to learn a little bit about how pepperoni is made.

Pepperoni is a cured salami sausage. This means that it has been subjected to a process called curing, which helps to preserve the meat for longer.

A whole cured pepperoni does not need to be refrigerated, and in Italian delicatessens, you will commonly see them hung from the ceilings!

When pepperoni is cured, it undergoes several processes that preserve the meat and also make it safe to eat.

A substance called sodium nitrate is added to the ground meat, which blocks the growth of bacteria. At the same time, sugar is also added, as well as lactic acid bacteria.

The combination of sugar and lactic acid kick-start a process called fermentation. This takes several days and turns the carbohydrates into alcohol or acids. Fermentation also drives moisture from the sausage, helping it to dry out.

The combination of fermentation and sodium nitrate is very efficient at keeping bacterial growth at bay. However, one final process will help to preserve the meat for longer.

Smoking the meat involves hanging the sausages in a smoker filled with wood smoke for anything from a few days to a few weeks. After this, they are hung in a drying room to mature.

Is Most Pepperoni Cured Or Uncured?

Most of the time, the pepperoni you see on sale will be labeled as cured. This will have been processed using the methods outlined above.

However, you might come across some pepperonis which are labeled as uncured, so what is the difference? It is highly unlikely you’ll come across a pepperoni for sale that has not undergone some form of curing process.

Contrary to its name, uncured pepperoni sausage is still cured, but in not quite the same manner as its cured counterpart.

For food to be labeled as cured, it must have undergone specific processes that meet the requirements of Food Standards authorities.

In the U.S., this means that they must have been preserved using artificial additives such as nitrates. However, some pepperoni sausages are preserved using an alternative to nitrates, such as sea salt, celery powder, or beet extracts.

These sausages have still been cured, but the processes they have been through do not meet the specific labeling legislation for them to be marked such.

This means that pepperoni sausages that have been preserved using natural methods are labeled as uncured, even though they have gone through a curing process.

This form of pepperoni sausage is far less common than ones preserved using artificial methods. However, they are becoming increasingly popular, especially with people concerned about the impact of artificial ingredients on our health.

Can You Eat Cured Pepperoni Raw?

The amazing thing about the pepperoni curing process is that it is not cooked at any point using conventional cooking methods! Since we would never normally eat uncooked meat (hello food poisoning), why are cured sausages different?

Pepperoni is technically a sausage made from uncooked meat, but the complex curing process makes it perfectly safe to eat raw. If you have purchased a pepperoni sausage that is labeled as cured, this can safely be eaten raw.

The reason that we normally cook pepperoni is that the cooking process enhances the flavor and texture of the sausage, particularly when it is used as a pizza topping.

However, there is no reason why you can’t eat cured pepperoni raw, and many people enjoy the flavor of this spicy, tangy sausage as part of a charcuterie platter.

So, while we’re all accustomed to eating cured pepperoni cooked on a pizza, it is perfectly safe to nibble at a slice or two of raw pepperoni too!

Can You Eat Uncured Pepperoni Raw?

If you’ve purchased an uncured pepperoni, it is highly unlikely that it has not been cured at all. Uncured pepperoni is normally cured using natural rather than artificial curing methods, and as such cannot be labeled and sold as cured.

Unfortunately, we have no way of knowing what processes your uncured pepperoni has been treated with, so it is impossible to tell if you can eat it raw or not without a close look at the packaging!

The packaging should clearly indicate if the pepperoni is safe to consume raw or if it should be cooked first.

It may say that it has been preserved using natural methods such as celery powder or sea salt, but if you have any doubt, it would be a good idea to cook the sausage before eating it.

Now we’ve got eating raw pepperoni all figured out, let’s take a look at some other pepperoni-related questions!

Can you freeze pepperoni?

Pepperoni is a cured sausage that is naturally preserved and will stay fresh and perfectly edible for a long time.

However, pepperoni can start to deteriorate over time, particularly when it is exposed to air, heat, or light. This causes the fat to become rancid, which taints the flavor of the meat.

To preserve pepperoni for longer, it can be frozen either as an entire sausage, chunks of sausage, or sliced. Choose whichever form best suits your needs – for example, slices of pepperoni straight from the freezer are great for making pizza!

Make sure that the pepperoni is tightly sealed in an airtight container or freezer bag to keep it in the best possible condition. If you have a recipe that calls for grated pepperoni, then freezing it first makes this task so much easier!

Does pepperoni need to be kept in the refrigerator?

Whole and unopened cured hard sausages, such as pepperoni, can be kept in a cool pantry for up to 6 weeks. This is because they have undergone a complex curing process to help stop the meat from deteriorating.

If you want to keep your pepperoni sausage in the best possible condition for longer, it can be stored indefinitely in the refrigerator until it is opened. Once you have cut into the sausage, it should be consumed within 3 weeks.

Can You Eat Raw Sausage? – And Why You Absolutely Should Not

Is Pepperoni Beef Or Pork?