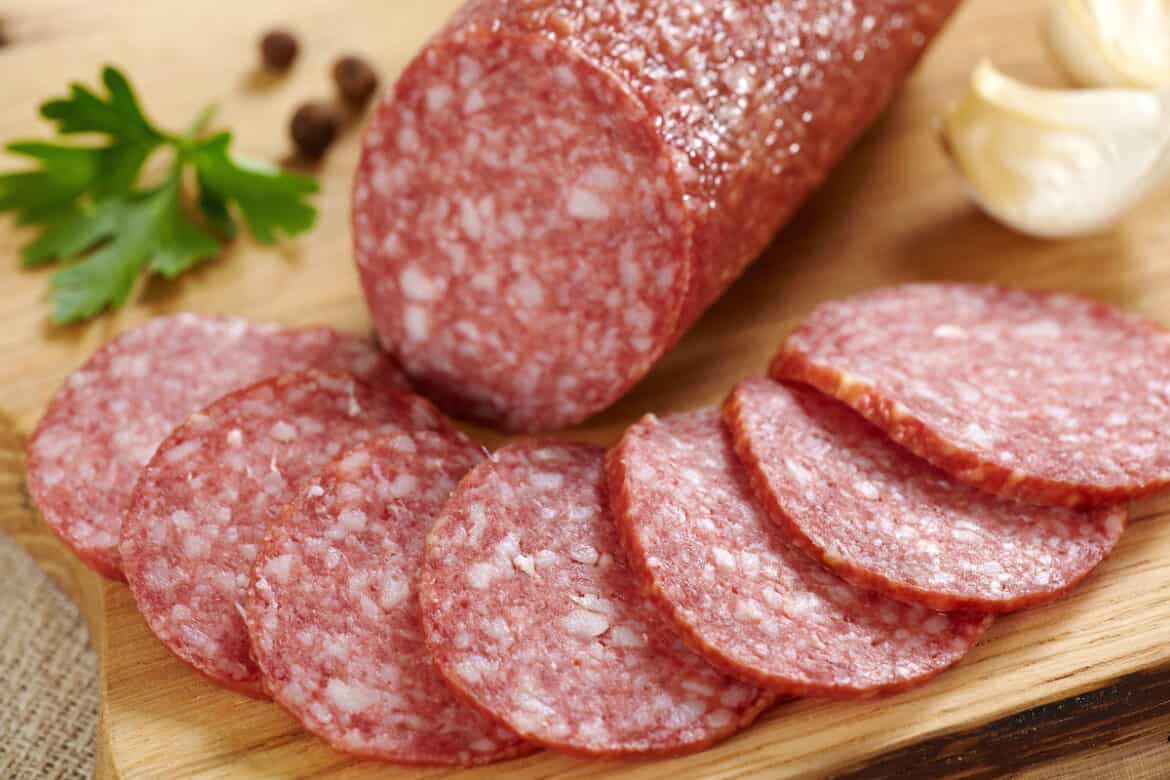 Who doesn’t love cured meats? Salami especially is one of our favorites.

It gave us delicious cheesy pizzas, mouth-watering gourmet sandwiches, gorgeous charcuterie boards, and a wide variety of savory pastas. But despite being such a popular ingredient, very few people know much about it.

Is salami raw? Well, yes but also no. Salami is prepared in two ways; hot smoked (which is cooked with heat) and dry-cured. While dry-cured salami isn’t cooked with heat, it is cured with salt and acids, making it completely safe to consume without cooking it first.

Today, we will look at exactly what salami is, the different ways it is produced, and exactly what makes it safe to consume “raw.” We will then also answer some other frequently asked questions regarding this delicious salty treat.

The definition of salami is very broad, as there are tons of different types. The best general definition is that it is a type of cured sausage that consists of fermented and air-dried meat.

Pork is usually the most popular choice of meat to use, as with many other types of cured and processed meats. The main ingredients used in virtually any type of salami include meat, minced fat, garlic, salt and spices, herbs, and vinegar or wine.

Despite pork being the most popular choice of meat used to make salami, beef is also very common especially to make halal or kosher salami.

Goose salami is popular in various parts of Northern Italy, while donkey salami is common in the Provence region of France. Other meats you will see include turkey, venison, veal, and even horse salami.

The raw meat mixture is first fermented, then stuffed into a casing, and hanged to cure or dry. We will discuss the exact manufacturing processes in the next section so that we can better determine whether or not salami is raw.

The two main types of salami are classified according to their manufacturing process. They can be made using either a dry-cured method or a hot smoking (or cooked) method. Dry-cured salami is the more common of the two.

Hot smoking is a cooking method that uses heat to cook the meat while simultaneously flavoring it with smoke.

The smoker itself first reaches temperatures of around 150°F (65°C) when the smoking process starts.

The casing dries out first without any smoke, after which the temperature is raised to roughly 160°F (71°C). The sausage is then smoked anywhere between 3-6 hours.

The temperature is again raised to 320°F (160°C) and the sausage is further cooked for another 2-3 hours.

Once the sausage has finished cooking, it is dropped into cold water and cooled until the internal temperature reaches 100°F (38°C). Then, the salami is stored in the refrigerator overnight before being used.

There are three main steps involved in this process. To make different types of dry-cured salami some of these steps have slight differences, but the basic concept remains the same.

Before any process starts, the meat and ingredients are first prepared and mixed together according to a recipe.

The meats are coarsely ground along with the fat, then, combined with the additional flavoring ingredients like spices and herbs. There aren’t “set-in-stone” ratios and you can experiment with flavors as much as you’d like.

Some salami types include yeast or a type of lactic acid bacterial starter culture. These ingredients will help start the fermentation process or help speed it up.

This meat mixture is then placed into a casing. This casing can either be an edible natural or artificial casing, or an inedible cellulose casing.

The salami is hanged in a warm humid area for 1-3 days to encourage fermenting bacteria to grow.

The bacterium that grows during the fermentation process produces lactic acid which lowers the pH and ultimately reduces the meat’s water retention. This means that the salami now becomes inhospitable for pathogenic bacteria (dangerous bacteria), making it safe to eat.

Traditionally, wine was used as a starter culture, using its very own bacteria to help cure the salami. Today it isn’t as common but can still be found.

The starter culture used, the time and temperatures at which the salami is fermented, and the other ingredients in the mixture all contribute to the unique flavor of different salami varieties.

The fermented salami is then moved to a cool humid environment to dry slowly.

The casing dries out completely and has to be protected from pathogenic bacteria. This is done either by a coating of flour or a white covering of non-toxic mold, similar to the rind that forms on aged cheese.

During the drying process, the meat also ripens and develops even more flavor. To stop moisture evaporation at a certain stage, the salami is removed and sealed in air-tight packaging.

Can You Eat Salami Raw?

In short, yes, you can eat salami “raw.” However, salami isn’t actually raw in the first place.

If we take a look at the dry-cured method of making salami, there are a couple of factors that contribute to it being safe to eat as-is.

Firstly, the ingredients used to make salami always include salt and almost always includes vinegar. Both these ingredients are natural bacteria inhibitors, meaning they create very undesirable and even inhospitable environments for pathogenic bacteria to grow.

Secondly, the fermentation process creates lactic acid. As we have mentioned before, lactic acid prevents bacteria from growing and also helps lower the meat’s water-retention capacity.

Then finally, because the meat cannot hold as much moisture, the moisture percentage of the salami lowers and when it is dried even further. The less moisture there is, the less favorable the environment is for bacterial growth.

All-in-all, by dry curing your salami, it naturally “cooks” it without high heat and creates an environment where no pathogenic bacteria can grow.

Now, looking at hot smoked salami, which does get cooked, the heat from the long smoking process destroys any pathogenic bacteria. It is also important to allow the salami to reach the correct internal temperature before consuming it.

Because hot smoked salami isn’t fermented, you have to ensure the meat has been fully cooked, as there aren’t many other deterrents that help prevent bacterial growth. For this reason, hot smoked salami goes bad quicker.

Now that we have determined salami can be eaten as-is or “uncooked,” let’s have a look at the many different things you can make using salami.

Arguably the most popular way salami is used is either on sandwiches or a cheese board. You can make something as simple as a grilled cheese salami sandwich, or a delicious gourmet salami Italian sandwich.

In terms of platters, salami fits onto virtually any type of platter, from cheese platters, breadboards, or wine pairing plates– the possibilities are endless. Salami is one of the very few types of cured meats that fit thousands of different flavor profiles and pair well with almost any other ingredient.

Some other delicious uses for salami are in smoky tomato pasta or even a delicious salami Alfredo. Another very popular dish that uses salami a lot is, you guessed it, pepperoni pizza!

You can also use it in a wide variety of Asian-style recipes, believe it or not. You can make delicious stir-fry, dumpling fillings, or even fried salami rice.

What Is The White Stuff On Salami?

Before you freak out, the white stuff on the outside of salami is good stuff. It helps protect the inside from pathogenic bacteria.

The white layer is usually a covering of benign white mold (a non-toxic mold). Many manufacturers also cover fresh salami with flour to help protect and insulate it.

Does Uncured Salami Need To Be Cooked?

If you take a look at the two methods by which salami is produced, you will see that one is dry-cured and the other hot smoked. As we have already mentioned, the hot smoked salami doesn’t get cured through fermentation but does get cooked.

The heat that is applied during the smoking process is enough to eventually completely cook the meat. The internal temperature reaches 160°F (71°C), which is when harmful bacteria are killed.

So no, uncured salami doesn’t have to be cooked before eating because it has already been cooked.

Healthy is a relative term in our opinion. Nothing consumed in high volumes is a good or “healthy” ingredient.

Overall, salami is very high in calories, salt, fat, and often nitrates (which help keep a rich color in the meat). None of these are particularly good qualities.

However, it does have nutrients and proteins that have their own benefits. But again, when consumed in moderation it is completely safe.

Is The Salami Casing Edible?

As we have mentioned, cured meats can be enclosed by either an edible or inedible casing. More often than not the casing is edible, especially when you buy packaged products.

The best way to tell is to chew on the casing. If it is extremely chewy and doesn’t seem to “melt” in your mouth, it is probably the inedible casing. The inedible casing isn’t toxic by any means; it just won’t break up in your digestive system.

Up Next: Capicola Vs Prosciutto – What’s The Difference?

Are Gushers Vegan? – What You Should Know