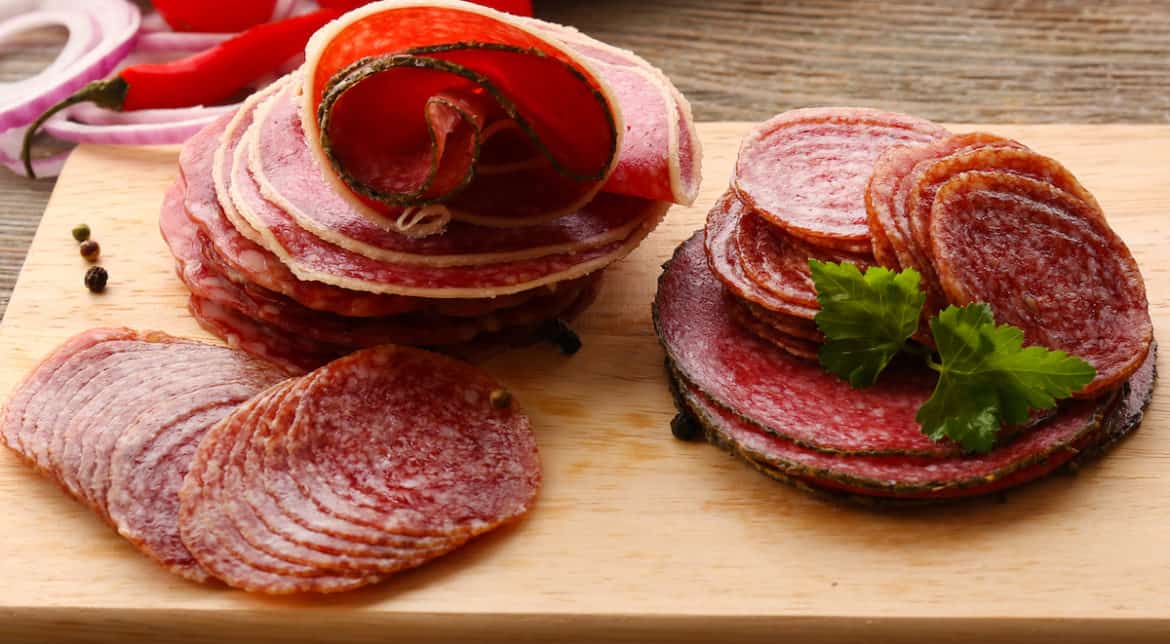 If you love your pizzas and sandwiches, there is no doubt that you would be familiar with salami and pepperoni. Basically, both being a type of sausage, pepperoni and salami are sometimes used interchangeably, but both hold specific places in the kitchen. Both give a rich, spicy flavor to the dish they are added to and are even a treat to eat on their own.

What is the difference between salami and pepperoni? Salami is a cured sausage made from fermented, air-dried meat. Pepperoni is an American variety of salami made from cured pork and beef. Pepperoni is spicier than salami and has a smoky peppery flavor, while salami has a richer flavor.

There is a little more to it than just that, so to properly understand the two sausages, and to boost your culinary knowledge, here is everything you need to know about salami and pepperoni!

The difference between salami and pepperoni begins with preparation. This then extends to different ingredients used in each sausage, and even to how the two are served.

Many are familiar with both being used in pizzas and subs, but salami is more traditionally served cold, and as part of antipasti, while pepperoni, the more American of the two, is really popular as a pizza topping.

Pepperoni can be considered a type of salami, as there are quite a few variants of salami to be found.

If you enjoy salami, you more than likely enjoy pepperoni as well, even though there is a taste difference. Both being spiced, and made with pork, they share a similar taste, but for those who know their sausages, there is a big flavor difference between them.

Salami is really just a term given to a cured sausage that originates from Italian cuisine. Interestingly enough, salami was first created by Italian peasants who figured out a way to ferment this meat, allowing it to last for a year, in case they had no further access to meat for a long period of time.

With its origins in Italy, salami has grown to be a massive part of Italian cuisine and has become popular all over the world as a topping on pizzas and other meals.

Traditionally, salami is made with pork, veal, chopped beef and sometimes poultry. This meat is mixed together with other ingredients to form its shape, and to create the flavor profile which is so specific to salami.

The most traditional ingredients used to achieve this taste are salt, vinegar, white pepper, minced fat, herbs, garlic, and nitrate. Once mixed together with the meat and shaped, the sausage goes through a fermentation process and is air-dried to form the cured sausage.

Keeping this in mind, there are different types of salami, all with varying tastes and specialties that make them unique.

Make sure though if possible, that you are getting true Italian traditional salami, you’ll know the difference right away. Some of the best salami I’ve had is from Creminelli, and you can actually get it on Amazon.

There is nothing quite like the spicy, rich taste of salami!

Pepperoni is a type of salami. It is considered a dry variety of spiced Italian salami. The main stand-out point with pepperoni is that it is made with a higher ratio of spices, which gives it its very deep taste which is so great to use on pizzas.

Pepperoni, while derived from salami, is an American sausage, and is most popularly found in the USA.

Pepperoni has the same nutritional value that salami has, and can be made from pork, beef, and poultry. Popular spices used to make pepperonis are paprika and chili pepper. While it is a drier version of salami, it is slightly softer, with a smoky aroma and taste, and with a bright red color.

You can’t beat a pepperoni pizza, and there really is nothing that pepperoni can be substituted with that will give the same high-spice, smoky flavor that pepperoni gives!

My favorite pepperoni is Foustman’s Artisinal. It’s not only natural and nitrate-free, but it’s the most flavorful pepperoni I’ve ever had. They recently started selling it on Amazon.

The Key Differences Between Pepperoni and Salami

To sum up the differences, here is everything you could hope to know that makes pepperoni and salami stand apart from each other:

Where Does Chorizo Fit In?

You cannot talk about the differences between salami and pepperoni without factoring in chorizo, which is a Spanish sausage that is very similar to salami but has a closer resemblance to pepperoni.

It is also dried cured and made with different spices. Just like pepperoni and salami, chorizo is cut into slices and can be eaten raw.

There are two types of chorizo to consider:

Which Is Better On Pizza?

There seems to be a debate on which is better on pizza – salami or pepperoni. There is only one answer to this – there should be no argument. While pepperoni is more popular to be used as a topping on pizza and is especially popular in the USA, both are superb on pizza and one should not have to choose which is best!

Pepperoni has a more peppery taste, whereas salami has a more spiced, herby taste, so both do well to add a richer flavor to a pizza, and it would be difficult to say no to either!

What are the white bits in salami?

The white bits found inside salami is actually fat. It gives the salami the rich flavor and texture, and without the marbled fat, salami just wouldn’t be the same.

here is also a white presence on the exterior of the salami, which is mold. This forms during the curing process and is called Penicillium nalgiovense. These spores of mold are applied to the surface of the salami once the meat has been fermented. As weird as this sounds, it is completely safe to eat.

Where does the name ‘salami’ come from?

Originating from Italy, the name obviously has Italian origins as well. The name comes from salare, which means to make something salty. The original form of salami was made from a mix of pork and salt, which was dried in the air, protected in a casing.

Can salami be halal?

Traditional salami, made from pork or beef, is not halal. However, there are some versions of salami made from beef which can be halal and kosher and do not contain pork.

They can contain other ingredients such as turkey, chicken or venison, and still be halal.

Both are loved around the world and are considered a delicacy respectively – whether it be a slice of salami on its own, or some pepperoni slices sprinkled on to a delicious slice of hot pizza.

The two might look similar at first glance, but there are substantial differences between the two. The main difference is the ingredients used to create both, with salami being rich and spiced, and pepperoni having more of a smoky peppery flavor.

However, there should be no debate to which is better, as both have a unique and delicious taste that is very difficult to turn down!

Up Next: 5 Best Vegan Pepperonis

The Difference Between Bourbon And Whiskey

The Difference Between Green Onions And Chives

Hojicha Vs Matcha — What’s The Difference?

Maltesers Vs Whoppers — What’s The Difference?

Pinsa Vs Pizza — What’s The Difference?