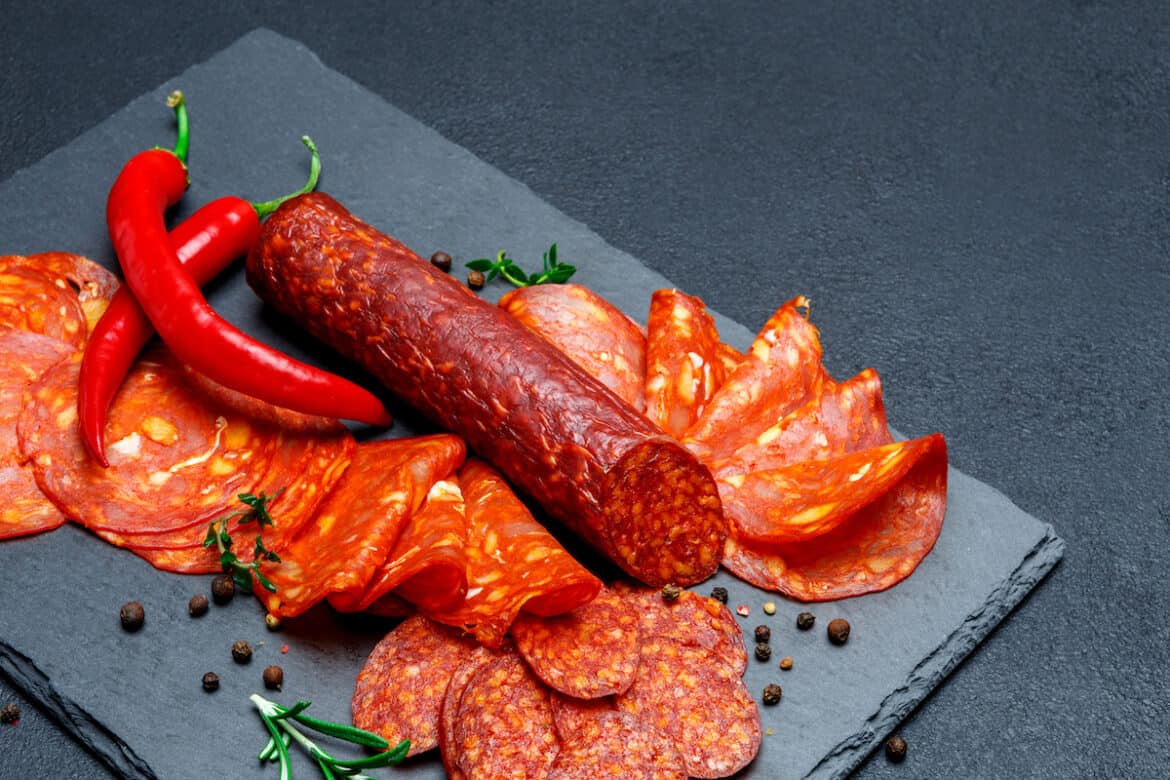 Pepperoni is one of America’s most loved processed meats. It is an extremely popular additive to pasta dishes, sandwiches, and of course, pizza.

However, with the latest food trends around the world, more and more people are moving away from meat products and placing a focus on vegan alternatives.

But who wants an alternative that doesn’t taste good? No one! This is exactly why we have researched some of the best vegan pepperoni alternatives.

So, what is the best type of vegan pepperoni? You should mainly focus on the ingredients used and their overall nutritional value, the texture of the product, and the color. All of these factors contribute to the deliciousness of the vegan substitute.

In today’s article, we will be looking at the many differences between traditional pepperoni and vegan pepperoni.

We will then look at exactly what makes a good vegan pepperoni product and finally, our top choices that can all be conveniently found online.

What Is Traditional Pepperoni?

Pepperoni is an extremely common ingredient in many different dishes.

It is used on charcuterie boards, as the protein for sandwiches, in a wide variety of pasta dishes, and of course, on pizza!

But, have you ever stopped and wondered exactly what it is? If you are familiar with salami, pepperoni is basically Americas’ version of it.

Pepperoni can be made from either pork or beef, and sometimes even turkey! Yes, that one also took us by surprise!

Luckily for us, in the United States the use of poultry in pepperoni must be indicated on the labeling, so be sure to check the ingredients list next time you go grocery shopping!

The popular sausage is an Italian American creation. Pepperoni has many similarities to spicy salamis made in the South of Italy.

However, classic pepperoni is slightly less spicy and the texture is softer because the ingredients have been finely ground.

Pepperoni is also made with artificial casing unlike traditional salamis, which are made from animal (usually pork) intestine.

Pepperoni is made by grinding the meat with ice, salt, nitrite, phosphates, and a variety of spices. These spices usually include salt, chipotle seasoning, cayenne pepper, paprika, oregano, thyme, and garlic powder.

The final product should be an extremely finely ground paste-like product. Then, fats are added to the mixture to create a flavorful emulsion. Once the filling is ready it is stuffed inside an artificial casing and allowed to ferment and dry.

What Is Vegan Pepperoni?

Vegan pepperoni is a vegetarian and vegan alternative to pepperoni. In other words, a meatless option to traditional pepperoni that contains pork, beef, or turkey.

This option can offer many benefits such as better nutritional value, fewer hormones in the food, traceability, and also a reduced impact on the environment.

Vegan pepperoni is made from plant-based materials such as vegetables, tofu, legumes, soy proteins, and wheat glutens. The ingredients depend on the company and the varieties you can find are endless!

That being said, despite the difference in ingredients, companies are still trying to mimic the taste, color, and texture of traditional pepperoni, so you may find some of these to be astonishingly accurate.

Traditional pepperoni’s flavoring and color come from the seasoning ingredients (spices) used in the recipe.

Pepperoni has a distinctive red-orange color with smoky, spicy flavors. The texture comes from the processing and isn’t affected by the type of ingredients used.

This basically means that it is very easy to mimic the flavor and color of traditional pepperoni and simply replace the meat with meaty-flavored plant-based ingredients.

Companies that produce vegan pepperoni use dense ingredients that will give a similar texture as the finely ground meat would.

Using vegan pepperoni is pretty much just like using regular pepperoni. Depending on the brand you buy, you might have to slice the pepperoni yourself, or it might come sliced.

Simply pop it onto your favorite pizza, or chop it up to add to pasta. There are even brands that are already pre-chopped!

So, just to break it down, let’s take a look at the nutritional value vegan pepperoni has to offer.

The sodium content is also considerably lower because there isn’t any meat that has to be cured. And finally, thanks to all the plant-based ingredients used, there is also a great number of vitamins, minerals, and even a bit of protein!

Now, when choosing any great food product, it all comes down to the flavor, the texture, the color, and the nutritional value.

For vegan pepperoni, you have to consider whether you want that classic meaty taste or simply an alternative look alike.

Make sure to look for a vegan alternative that has a similar texture to traditional pepperoni. The color should also be pretty spot on considering it comes from the spices.

Then, of course, the nutritional value of the vegan pepperoni! Many people choose the vegan alternative for health reasons, so make sure you know what is inside before buying it.

This is one of our favorite vegan pepperoni products on the market because of its shockingly similar texture, color, and meaty flavor to traditional pepperoni.

Additionally, because they have been pre-sliced, it makes these extremely convenient and easy to eat on the go and use in the kitchen.

Everybody hates unevenly sliced pepperoni, so this product takes the effort out of it!

The pepperoni is made from chickpeas, wheat gluten, nutritional yeast, smoky flavoring, and finally, some spices. The meaty flavor comes from the yeast and smoky flavoring.

This is also a product that is very low in calories, sodium, fat, and doesn’t contain any trans fats! All in all, this is a delicious option that can be used as a seamless alternative without compromising on flavor.

These pepperoni bits have the best texture imaginable, all thanks to the plant-based ingredients used!

Simply pour these pepperoni bits into your pasta dish or casserole, and you’re set for a delicious meal, no chopping needed!

And if you can’t use it all, no problem! They come in a convenient re-sealable bag!

The base of this pepperoni is soy protein, soybeans, beet juice, spices, and natural smoke flavor. This creates that real meaty flavor without having to use any meat.

It is a product low in fat and entirely free of cholesterol. It is also a fantastic source of vegan protein.

These pepperoni slices are made from non-GMO ingredients and are kosher certified.

It has also been enriched with vitamins and minerals which you should take into consideration depending on your dietary needs.

It is an entirely plant-based pepperoni mainly consisting of soy, wheat gluten, and spices.

In terms of nutritional value, it contains virtually no fat making it very low in calories. It is also a good source of iron and plant-based protein.

This is a very healthy vegan pepperoni compared to many other products on the market.

What makes it extra unique is that it is completely gluten-free! It is very high in plant-based protein and low in fat, also making it lower in calories.

This is an extremely realistic pepperoni alternative that not only caters to the meat-free aspect of it all, but also to many other dietary needs!

Okay, so this pick is actually a variety box that includes a bunch of vegan meat products.

However, this variety box has one of the most delicious vegan pepperonis we have ever tasted!

And the rest of the products included are also pretty fantastic!

Not only do you get a delicious vegan pepperoni, but you also get plant-based burger patties, smoker vegan patties, smoked meat-free bangers, British vegan bangers, and finally, taco stuffing.

All-in-all, these will be enough to make at least 13 meals and will keep fresh in the fridge for up to 4 weeks (1 year in a freezer).

Okay, so moving on to their vegan pepperoni. This pepperoni is made mainly from organic adzuki beans, barley, and wheat gluten. The flavoring ingredients used include salt, garlic, vinegar, and some spices.

To make the final product, the ingredients have been minimally processed to create a perfect flavor profile and pepperoni texture. This pepperoni is both low in fat and calories making it a fantastic weight-loss option.

You can use this product as-is on charcuterie boards, in pasta dishes, sandwiches, casseroles, stews, pizzas—the possibilities are endless!

Up Next: Is Chicken Red Meat?

Types Of Oatmeal – The Breakfast Breakdown