Home Cooking Tips Can You Eat Raw Sausage? – And Why You Absolutely Should Not
Cooking TipsFood SafetyFoodsguy

Can You Eat Raw Sausage? – And Why You Absolutely Should Not 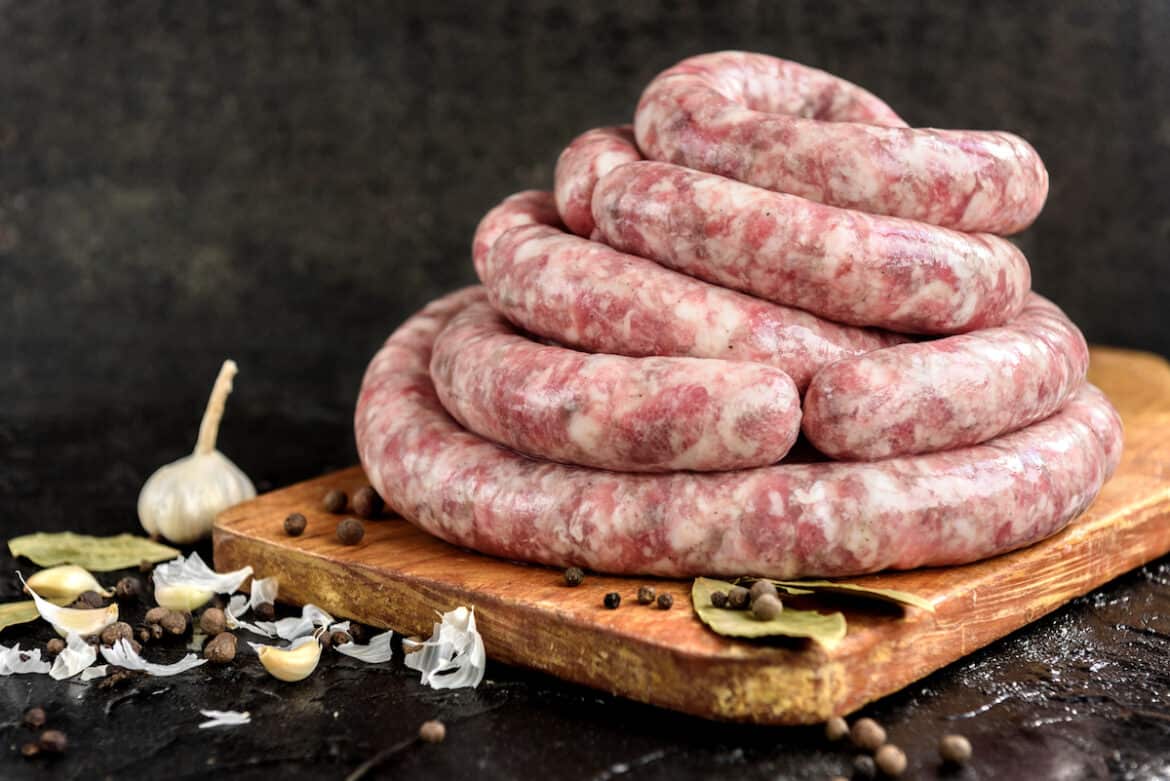 Sausages come in many varieties. You can find them in ready-to-cook packaging or even raw.

Most processed meats go through strict quality controls before they reach the end consumer. However, the entire process of producing processed meat isn’t foolproof.

Even the preparation of the sausages can at times contaminate the food.

Some people believe eating raw sausages or meat can provide them with more nutrients as cooking food usually rids off some nutritional value but there is so much more to the story than just nutrition.

Can you eat raw sausage? No. Meat, either precooked or raw shouldn’t be consumed without cooking. There is detailed information on every sausage pack that indicates how the food is to be prepared. Eating raw meat can pose several health risks that may outweigh any benefit gained by them.

If you have been told that eating raw meat is the secret to a long and healthy life then think again!

While this belief may be derived from a few traditions, there is a lot to consider before you go consuming commercial-made processed meat. Read below to learn more.

Why You Should Never Eat Raw Meat

Humans have been consuming raw meat in different cuisines for generations. Yes, you read that right. There are many cuisines out there that have raw meat dishes and not only this but these dishes are considered a highly enjoyable delicacy too.

So how does one eat raw meat in the first place? Well, before we begin and eventually expand upon why it is not a good idea to eat raw sausage, we need to clear a few concepts.

Humans avoid eating raw meat for mainly 2 reasons: raw meat can be much harder to digest, and raw meat may contain harmful bacteria like E. coli and Salmonella.

The first part pertains to digestion. Not shockingly, raw meat can be very hard to digest and while not all meat is made the same, some may be easier to digest than others.

For example, raw chicken meat cut into paper-thin slices or minced horse meat are easily digestible delicacies in some cuisines that we will discuss in a bit.

These particular animals can be consumed raw but there is a huge asterisk here. While they may be easier to digest, almost every meat contains bacteria, which brings us to the second part of why humans shouldn’t eat raw meat.

Raw meat is bound to collect bacteria due to the inherent flaws in meat processing and the enzymes within the muscle fibers of the meat – and this goes for raw sausage manufacturers too.

Even though meat processing factories are closely regulated and monitored, the processes through which meat goes through are bound to collect bacteria.

The Culture Of Eating Raw Meat

As mentioned above, there are many cuisines out there that have integrated raw meat as part of their cultural heritage.

For example, Japan is famous for consuming raw meat – that too in different ways.

So, how do they consume meat without getting sick? Well, the reason why most people don’t get sick by eating raw meat in these highly-niche delicacies is due to preparation.

Raw meat is prepared by either master chefs or even highly experienced street food vendors. The meat is first blanched in boiling water for some time to kill off any bacteria on the surface of the food.

Once the meat is cooked only on the surface, it is taken out and then processed further.

The reason why we say this is that although bacteria are said to only penetrate 0.3 mm of the surface of the food, they can still get back on the food via different means.

The cooked surface is free of contaminants and it is removed by cutting deep enough to ensure that there is no chance of bacteria under the cooked meat.

However, even with all the preparation, bacteria can still get on the meat by means of external transmission.

So, if you think eating even processed raw meat is safe then we would advise you against doing so, no matter what the supposed benefits are.

This analogy of preparing and consuming raw meat can easily be translated to why it isn’t okay to eat raw sausage as well.

The US has strict regulations against improper preparation of food but the truth is, even if the sausages are made under the strictest of regulations, the meat is still susceptible to spoilage.

How You Should Consume Sausages

The only way to guarantee a safe and healthy meal is by cooking the meat as indicated by the manufacturer or as stated in any recipe.

Sausages should be cooked by boiling, frying, or via any method that involves heat. A combination of these methods can also be used to cook sausages. The easiest way to go about this is to follow the instructions on the pack.

However, if you don’t have instructions, then for regular sausages, cook them in a pan with oil or boil them in water for about 15-20 minutes at medium heat.

You ideally want to reach a temperature of 160°F, which can normally be achieved by a cook time of 12-15 minutes. This is perfect for cooking meat thoroughly and ensuring that it is free from bacteria.

You will know when the sausage is ready when it changes color from pink to a whitish texture that is homogenous on each side.

You can even take out a sausage and cut it in half to inspect the inside too. The sausage should be uniform in color throughout.

You can bake, cook, air fry, deep fry, or pan fry sausages using this method. Make sure to keep moving them around so that they are cooked from every side. Overcooking may dry out the meat so be careful when timing the sausages.

Now that we’ve gone over why you should absolutely never eat raw sausage, let’s take a look at a few related questions on the subject!

I accidentally ate raw meat. What will happen to me?

Remain calm and consult with a doctor. Medical personnel may put you under observation for some time to see if you get ill.

The best-case scenario is that nothing will happen, the worst case is a bad case of food poisoning that may be easily treated if you are already under observation.

While accidentally consuming a small amount of raw meat may not be a big deal, the circumstances under how the meat was prepped and how poorly it was cooked play a huge role in determining whether you are likely to get sick or not.

No. No matter how well the food was packaged or prepared and packed, there is always going to be a risk of the food getting contaminated during the many stages of food processing or at home.

Many factories use the same machinery to process multiple batches of meat and you can also pick up germs from an uncleaned kitchen counter.

If one contaminated batch is exposed to any machinery during any processing stage then all subsequent batches may as well be contaminated too.

This is why all brands are required to post proper cooking instructions to avoid infection, even when the food is prepared under strict regulation.

Contrary to popular belief, rare steaks may also be dangerous, especially to some high-risk people who can easily get food poisoning.

As a general rule, always remember that there is no clear way of guaranteeing the safety of uncooked or raw meat. When in doubt, just cook it throughout!

Up Next: Types Of Tilapia – The Ultimate Guide

Types Of Tilapia – The Ultimate Guide