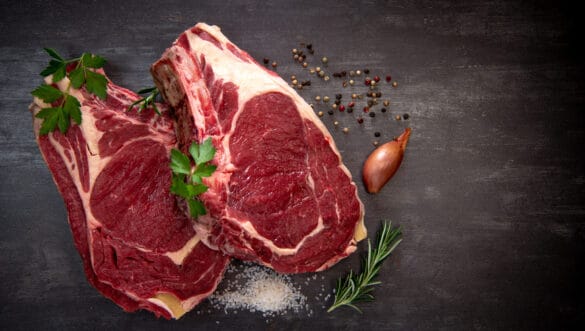 Many people are put off eating unusual meats such as buffalo because they are worried that it might have a strong, gamey flavor. But if you’ve never tried buffalo before, you really don’t know what you are missing!

So, what does buffalo taste like? Buffalo (or bison) tastes similar to beef but is lighter and less overpowering. Grass-fed bison has a hint of sweetness, and high iron levels give a subtle earthy flavor. Buffalo meat can be a healthy substitute for beef, as it is lower in fat and more sustainable.

We absolutely love buffalo meat, and we would like to convince you to give this flavorsome and sustainable source of protein a try! So, let’s take an in-depth look at this buffalo meat and try to explain exactly what it tastes like.

What Is A Buffalo?

The noble buffalo has long been a source of food for humans, with the meat and milk of this magnificent animal both consumed for many centuries.

This animal was an important source of sustenance for Native Americans, who revered these animals as symbols of honor and generosity.

A legend told of how buffalo were released on earth by a hero to provide humans with a food source, and that their spirits brought sacred medicinal knowledge.

But, what exactly is a buffalo? These animals are members of the bovid genus, meaning they are distantly related to cattle.

The buffalo meat most commonly sold in the United States is actually the meat of an animal called a bison, which is a close relative of the water buffalo.

You may see buffalo on a menu under many different names — in India and Nepal it is known as red beef, or buff, while in Spain it is sold as carabeef. In Western countries, you will most often see it marketed as bison or buffalo meat.

In the 19th century, buffalo in the US were overhunted to the point of near extinction.

However, this magnificent animal is making a comeback, with forward-thinking ranchers realizing the potential of this low-maintenance grazing animal!

Sales of buffalo meat in the West have increased by over 100% in the last 10 years, and most of this meat comes from captive herds of bison which are also raised for their fur.

Bison was once only seen on the menus of high-end restaurants, but it is now becoming more commonplace. In Asian countries, bison are still mainly kept for milk production rather than meat.

Buffalo are huge animals, often weighing more than a tonne. Most of this body mass consists of muscle, which is the part we can eat.

Young buffalo meat is considered to be the highest quality, with tender muscle tissues that contain lower levels of fat.

Is Buffalo Meat Good For You?

Although these days we are generally advised to eat less red meat, buffalo (or bison) meat is actually a healthy alternative to beef.

It is an excellent source of highly digestible protein and is also packed full of nutrients such as B vitamins, iron, selenium, and zinc. It is a good source of omega-3 fatty acids and is normally lower in fat than beef.

This makes buffalo a great substitute for beef that is recommended as part of a heart-healthy diet. This particularly applies to processed meat products that are not normally considered to be healthy, such as sausages and ground meat.

The other big advantage to swapping beef for bison is that buffalo is generally regarded to be a more environmentally friendly and sustainable option.

Bison farming is thought to have a lower environmental impact than cattle farming, and this magnificent animal is a key part of the ecosystem that can contribute much more than just meat.

How Is Buffalo Eaten?

The great thing about buffalo is that it can be substituted for beef in just about every way! These two animals are very similar, and their cuts of meat often have much in common.

The prime cut of buffalo, as in beef, is the steak.

Buffalo filet is the most tender, while buffalo ribeye is highly prized for its marbling and flavor. Buffalo sirloin is leaner and full of flavor.

Buffalo steaks can be cooked in just the same way as beef steak.

They are normally lightly seasoned with salt, pepper, and herbs, then char-grilled or pan-seared. Remember to let it rest after cooking to let the meat relax and tenderize!

Like beef, buffalo steaks can be eaten rare, as long as the target cooking temperature has been met. Buffalo steaks can also be cooked sous vide, which is a great option for thicker cuts of meat.

It is important to bear in mind that ground buffalo tends to be quite lean, so you may need to add some extra fat or combine it with ground pork.

It is hard to describe exactly what buffalo tastes like. Beef is probably the closest relative to buffalo that we eat, and there are some similarities between the two in terms of flavor.

Buffalo is a red meat with a lighter, more delicate flavor than beef – some people describe it as a cross between free-range pork and beef.

It has a slight hint of sweetness that is often found in grass-fed animals. This meat is also high in iron, which gives it a distinctive earthy flavor.

The great thing about buffalo meat is that the flavor is not strong or overwhelming. It is robust enough to be paired with other strong flavors, but will not overpower the whole dish.

The high levels of iron give the meat a beautiful red color which adds an impressive richness to your finished dish.

Many people are put off trying buffalo or bison meat as they think that it might taste gamey. But in fact, it is far from gamey and has a subtle and delightful flavor that many people describe as elegant and refined.

The confusion around the gamey flavor of bison may arise from the natural earthiness of the meat. This comes from the high levels of iron, but it does not taste anything like game animals such as venison or rabbit.

Bison steaks should be tender and juicy, with a smooth texture that almost melts in the mouth. However, buffalo can be trickier to cook than beef, and it is all too common to come across a bison steak that is chewy, dry, and unpleasant!

Buffalo are large, muscular animals that tend to wander slowly for many hours each day in search of food. This creates muscular tissue that is crisscrossed with connective tissue – known as marbling.

In cooking terms, marbling can be your best friend or worst enemy! This connective tissue is tough, chewy, and inedible if not cooked correctly.

However, handle it in the right way, and it melts into the meat and takes the juiciness and flavor to the next level.

As a rule of thumb, meat that has very little connective tissue, such as a sirloin steak, can be seared rapidly on a high heat.

Any meat with large amounts of connective tissue, like the hardworking brisket, will need to be cooked on a low, slow heat for many hours.

OK, so far we’ve mentioned beef a lot when talking about buffalo, but does that mean that buffalo tastes like beef?

It seems obvious to compare buffalo to beef, but in reality, the two types of meat have many differences.

Buffalo meat is darker in color than beef, with milky white fat. It has a sweeter and more subtle flavor, bringing a gourmet twist to your cooking.

Buffalo also has an earthiness that is not found in beef, due to the high iron content. It is also lower in fat, which can tend to make the meat dry if it is not cooked correctly.

How To Cook Buffalo Meat

If you’ve bought buffalo meat for the first time, you’ll need to think carefully about the best way to cook it!

The lower fat content of bison means it is easy to overcook it, turning the meat dry and unpalatable. This means that buffalo is best treated like venison or elk, rather than beef.

You have two options when cooking buffalo. The first is to cook it low and slow in a moist environment, such as a stew or pot roast. If you’ve got a larger cut of meat or one with a lot of marbling, this is the best option to choose.

For a prime buffalo steak, the best method is to cook it quickly on a hot grill or pan-sear it. The key here is to stop the meat from drying out, so don’t be afraid to cover or wrap the meat if it is cooking too fast.

The resting period is crucial to keep buffalo steak moist.

Ground buffalo meat can be cooked in the same way as ground beef, but it is important to bear in mind that it is much lower in fat. You may need to combine it with fattier meat such as pork to keep it moist.

What Is A Gamey Taste?

Bison Vs Elk – What’s The Difference?

What Does Moose Meat Taste Like? – The Complete Guide