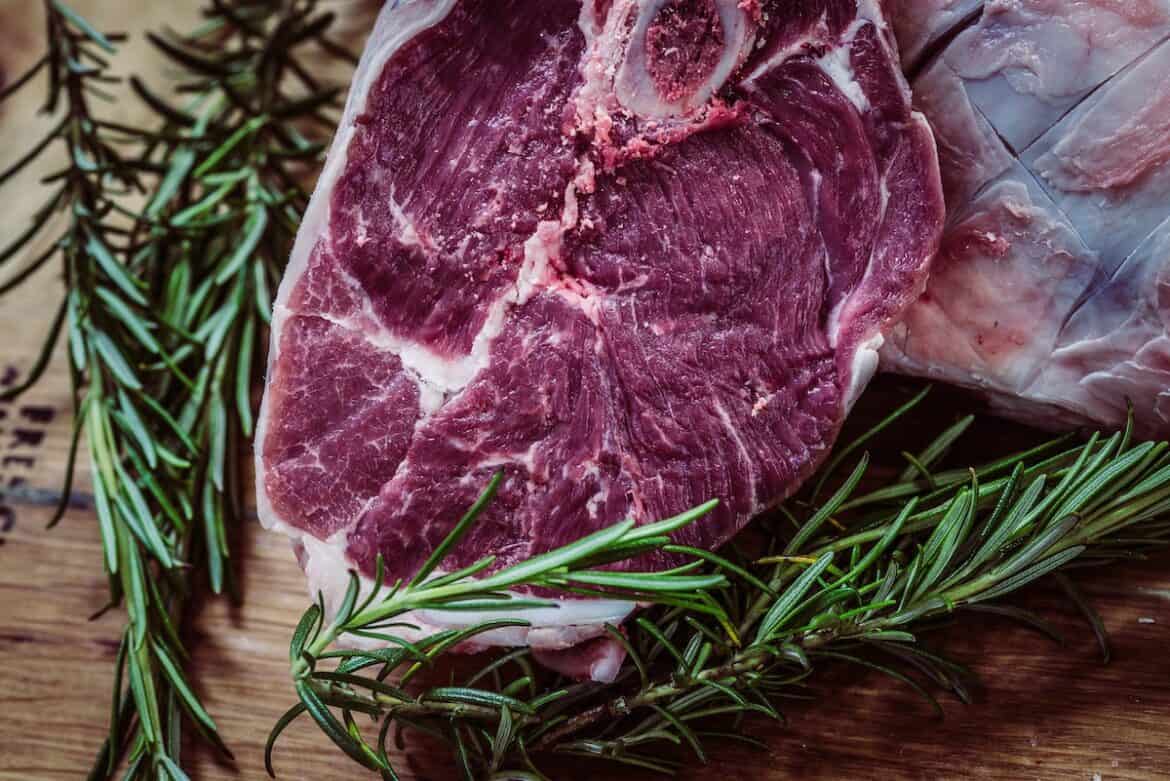 I also think moose steak is one of the most underrated and delicious meals on the planet. It tastes like the best steak you’ve ever had combined with goat cheese. Truly a delight!

But bear meat is not something I have ever encountered before, and I was curious whether it would live up to the flavor of other woodland delights.

At first brush, it may seem like a weird meat to consume, but many hunters extol the virtues of a properly prepared bear roast as a great delicacy.

So, what does bear meat taste like? It depends on the season and what it has been eating. Spring bear is going to be milder, like a sweeter tasting venison, and lower in fat since it has just come out of hibernation, while a fall bear will have more fat and may taste like the food it has been eating.

Read on to discover the complex flavor of bear meat, where to buy it, and the different delicious ways to use it in the kitchen.

One of the most popular bears to hunt and consume is the black bear, so that’s what this article will focus on. An article that tried to outline what every bear tastes like would have you reading until next week!

According to hunters and those in the know, bear meat has different flavors and textures depending on the time of year it is hunted, how it’s prepared, and what it has been eating.

In general, bear meat has a similar gamey taste that you would find in venison, though it is often a little sweeter tasting. It has a dark red color, like beef, but a little darker.

In terms of texture, it would be close to pork, though it has a slightly coarser grain to the meat since it is a wild game.

When classified, bear meat falls under the umbrella of red meat and it has a fibrous texture like beef, but with a little more chew to it.

When it comes to the different hunting seasons and when the bear was caught there can be a big impact on the flavor of the meat.

If a bear is caught in early spring just after coming out of hibernation, then it is likely the meat will be leaner and milder in flavor.

It has just spent the last several months sleeping and using up its fat stores for energy so there is not a ton left in the meat.

At this point, it is also mostly feeding on tender young greens and plants, which gives it that sweet, mild flavor.

The age of the bear can also impact its taste and texture. The younger the bear, the tender and milder the meat will be, and vice versa.

If the bear is caught in the fall, it has had several months to put on a thick layer of fat in preparation for hibernation. It has also spent the summer eating different things that range from fish to carrion to other prey.

A bear that has eaten lots of fish is going to have meat that reflects that flavor. Many hunters do not recommend eating bears that are known to survive off fish-heavy diets since the meat doesn’t have a very good flavor.

Regardless of the diet, a bear that is caught in the fall is going to have a stronger flavor profile, even if it’s been living off blueberries and corn.

You will also need to have the fat cap trimmed off, though there will still be plenty of marbling throughout the meat.

It really depends on what flavor you’re looking for. If you prefer milder tasting meat, then you will want to look for a bear that was processed in the spring.

If you want a deeper flavor with more fat marbling and a bit more texture a fall bear is perfect for you.

How To Process And Store Bear Meat

If you are a hunter or are purchasing your meat from a hunter then you will want to make sure that the bear was properly processed.

If it wasn’t processed and stored properly after being caught, then the meat will be tough and have an unpleasant flavor that no cooking process can manage.

Depending on the temperature of the area when hunting, there will be a window of about 12-24 hours to process the meat and get it into the freezer before it starts to spoil.

Unlike other meats which can be hung to dry age, the fat on bear meat can spoil and go rancid quickly. This spoilage taints the flavor of the meat. For that reason, the bear needs to be field-dressed and then frozen as soon as possible.

Generally, the meat will last about 3 months in the freezer. Some bear meat connoisseurs recommend waiting a week before eating the meat (once frozen) so that the flavors can develop and deepen.

Where Can You Buy Bear Meat?

Depending on where you live, it’s not super likely that you will find bear meat at your local grocery store.

Fortunately, you don’t have to be a hunter to enjoy this woodland delicacy since there are several online retailers that specialize in bear meat and wild game.

There may be a local butcher in your area who is able to source bear meat, so it is worth going and having a chat with them to see whether they can get it for you.

If not, you could always befriend a hunter and ask them to share their bounty with you.

Different Ways To Use Bear Meat In The Kitchen

There are plenty of ways to enjoy your bear meat depending on the cut, the toughness, and your preference.

Due to the possibility of Trichinella spiralis and T. murrelli in bear meat, it needs to be cooked to an internal temperature of 160°F to avoid illness.

The best meat to use for grinding is the chuck from the bear’s neck since it is a little tougher but packed with flavor. If you want to mellow the flavor of the meat a little, you can marinate it in milk, buttermilk, or yogurt overnight.

I hope after reading this article you have a better sense of what bear meat tastes like and that you may even be inspired to give it a try if it is ever offered to you.

This wild game has a slightly sweeter taste than venison, with a coarser texture than beef. It’s dark red and filled with flavor.

Bear meat harvested in the fall will have a more intense flavor that is impacted by the diet of the bear in question. The more plants and berries they consume, the sweeter the meat will be.

You will likely want to avoid bears who eat a lot of fish since this meat can have a fishy aftertaste that some people will find unpleasant.

While it can be a little harder to source, you can get bear meat from licensed hunters who have extra, specialty butcher shops in your area, or from online retailers.

Have you ever tried bear meat? What’s your favorite way to enjoy it?

Up Next: 5 Best Sugar Sticks For Coffee

Is Pomegranate A Citrus Fruit?

How To Separate Frozen Chicken – The Best Ways