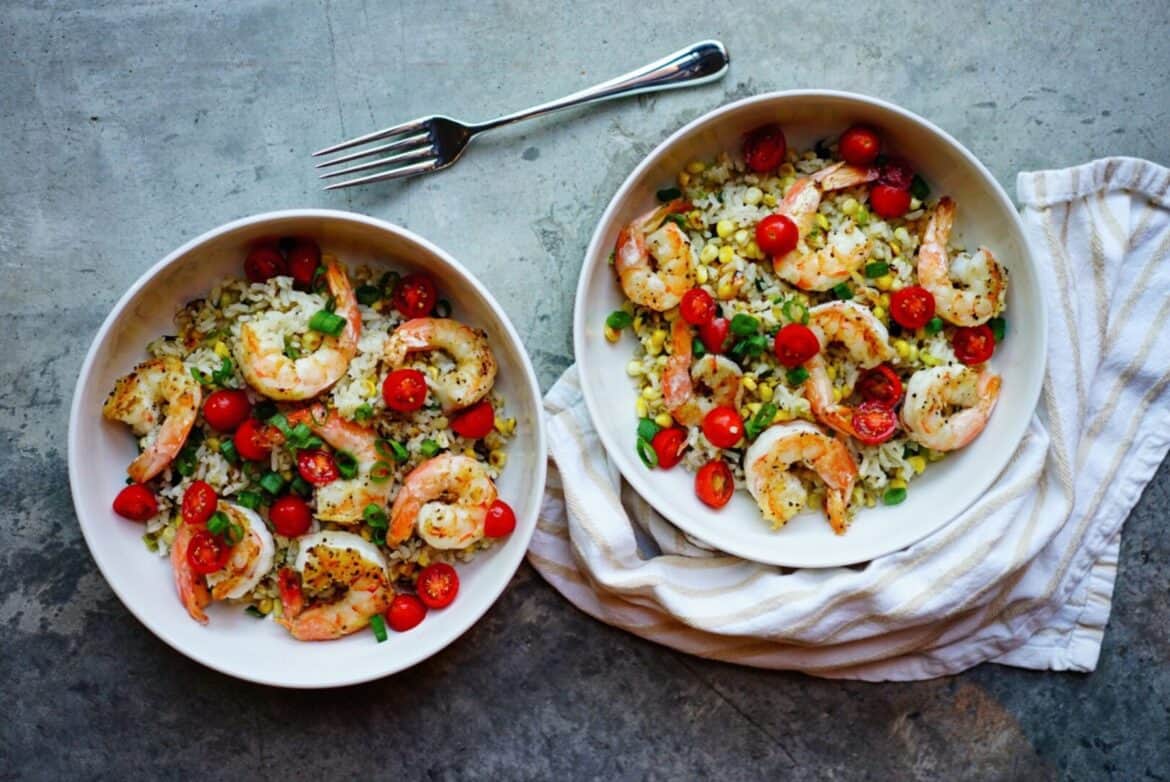 As everybody knows by now, bad or spoiled seafood is extremely dangerous. However, not many people even realize that they are eating bad seafood.

Shrimp can be an especially misleading ingredient! Because of the many different ways they are cooked and seasoned, people often mistake a slightly off flavor with bad cooking techniques used.

So, what does bad shrimp taste like? The best answer we can give you is that they taste like fish. Remember, fresh seafood doesn’t taste or smell fishy — it is salty and tastes like the ocean, but not “fishy.” Trust us, you’ll know what we mean if you taste it!

In this jam-packed article, we will explore the many ways you can tell your shrimp (both raw and cooked) has gone bad, as well as what both of them would taste like (since we don’t want you to eat bad shrimp).

And to be extra helpful, we will also go into some detail on the best storage techniques for both raw and cooked shrimp!

Today, we are jumping right into it! But first, let’s discuss exactly what cooked shrimp tastes like when the shrimp has gone bad.

Now, cooked shrimp that’s bad is sometimes difficult to recognize — that’s because shrimp is often cooked with a ton of flavoring ingredients.

For example, you can deep-fry battered seasoned shrimp, pan-fry them in basting sauces or marinades, and roast them with aromatics.

These are all ways that a slightly off flavor can be masked, but this doesn’t mean you should go ahead and ignore that slightly fishy flavor you are picking up.

Other times, your shrimp has gone very bad, and you’ll immediately notice a strange off flavor, even if the shrimp has been seasoned excessively.

So, what can you look out for?

Bad cooked shrimp will have a fishy and rotten flavor — it can also have a very strange rubbery texture that’s very chewy. There aren’t way different “flavors of bad shrimp,” but they are easily recognizable.

Other Signs That Your Cooked Shrimp Is Bad

Cooked shrimp that are bad will also smell fishy. You can also compare it to rotting eggs or ammonia.

They could have a slightly slimy texture (depending on the cooking method used to make them), but they will all generally be very rubbery and chewy.

Bad shrimp won’t be refreshing, juicy, or soft when they are cooked — most of them could even fall apart after they have been cooked.

Bad cooked shrimp can make you very sick. It can even cause death — we aren’t exaggerating!

Just because you applied heat doesn’t mean that the flesh of the shrimp will no longer be rotten.

Shellfish is one of the biggest ingredients that cause severe food poisoning, which leads to hospitalization.

So, if you suspect your cooked shrimp (or any other type of seafood) is bad, toss it rather than taking that risk!

Now, if you don’t know this already, raw shrimp dishes aren’t popular because of the dangers involved with eating them in that manner.

Shrimp is generally (in most countries) considered to be inedible when raw.

We know that raw shrimp is a popular ingredient in sushi, but you’ll likely only find it in specific restaurants or Asian countries.

It isn’t impossible to find shrimp uncooked (or in ceviche). But again, we don’t recommend eating raw shrimp.

So, we cannot really answer “what does bad raw shrimp taste like” because we aren’t going to take that risk, and it seems neither is the rest of the internet.

But, we can make an educated guess. If you have ever had spoiled sushi (raw fish), then you’ll immediately recognize when raw shrimp has gone bad.

There’s a saying we live by when it comes to buying and consuming seafood — if it smells like fish, it has gone bad. Sure, it isn’t very catchy. But it is very accurate!

And remember, if you do taste something extra fishy, don’t swallow! It isn’t worth the massive and serious food poisoning risk you are taking.

Other Signs That Your Raw Shrimp Is Bad

Luckily, it is much easier to physically identify bad raw shrimp than bad cooked shrimp.

Bad raw shrimp will be discolored. They mainly show an uneven color (or dull color) on their surface or black spots. Some raw shrimp will even begin to show signs of mold!

Then, raw seafood, shrimp especially, always eventually get a slimy layer on their surface. If slime appears on your shrimp, immediately discard the seafood safely.

Do not rinse off the shrimp to try and salvage it. We know shrimp can be expensive, but tossing it will cost you nothing compared to the hospital bills you’ll receive from getting serious food poisoning.

And finally. Again, if it smells like fish, it has gone bad. Shrimp should never smell fishy and should never have the texture or look of spoiled fish!

How To Choose The Best Raw Shrimp

Shrimp can be bought fresh or frozen. It is easiest to tell when fresh or defrosted shrimp has gone bad than with frozen shrimp.

Oftentimes freezing traps or hides the common signs that shrimp (or food in general) has expired.

So, to buy the best fresh shrimp, you can first look at the overall color and appearance of the shrimp. There shouldn’t be any slimy liquids on the surface of the shrimp.

Then, it should also have a completely uniform grayish-white color. Some raw shrimp species are light blue. But they are all semi-translucent.

Shrimp should also not have any black spots or discoloring. The black spots will usually appear on the head first, then on the rest of the body.

The flesh of the shrimp should be firm. It shouldn’t be soft, squishy, or have bruises on it. The firmer the texture, the fresher the shrimp. As shrimp age, their flesh softens.

And finally, as we have repeatedly mentioned, fresh seafood shouldn’t have a fishy smell. Take a whiff and make sure that you don’t even pick up a hint of odor. Fresh seafood is always relatively odorless.

How To Choose The Freshest Frozen Shrimp

This one is tricky because, as we mentioned, freezing ingredients also mask their flaws and impurities.

The only advice we really have for buying frozen shrimp is to check when they were frozen and what the estimated expiry date is.

Also, check that there isn’t any damage on the packaging or tears on the plastic covering. You can also avoid boxes of shrimp that has excessive freezer burn.

Freezer burn causes the flesh of the shrimp to soften and will give you second-grade shellfish.

Most frozen shrimp boxes have a little plastic window so that you can see what’s inside. If yours does too, try to see what the condition of the shrimp is.

Are they intact (or look as described)? Are they neatly packed and are they clean? These will all help indicate the quality.

And finally, frozen shrimp should not have areas of frozen liquid or blood. If they do, then it means that the shrimp has defrosted at some point before being refrozen again.

How To Properly Store Raw Shrimp

Fresh uncooked shrimp doesn’t have a very long shelf life. Often, it’s only a couple of days — four at the most!

These are highly perishable ingredients, so storing them effectively is extremely important.

First, make sure that the fresh raw shrimp is completely dry. Any excess moisture could cause bacterial growth and the formation of slime. So, pat them dry well with disposable paper towels.

Then, place them inside an airtight container. Make sure the container has a tight seal, or wrap it in plastic or saran wrap.

Place the container in the coolest possible area. The back of your fridge is usually the best option and has the least temperature fluctuations.

How To Effectively Store Cooked Shrimp

You really shouldn’t store cooked shrimp — it is always best to eat seafood on the day you made it.

However, if you absolutely cannot avoid storing your cooked shrimp, you should eat it the very next day.

Depending on how the shrimp has been cooked, you will need to use different storage methods.

Most of them can simply be cooled completely, placed into an airtight container, and stored in the back of the fridge until you’re ready to eat or reheat them.

If you want to freeze cooked shrimp, you will need to first freeze them in a single layer. Only once they are completely frozen can you combine them in one container and freeze them together.

That’s a lot of shrimp talk. Here are some additional questions that we thought you might have!

How can you tell if you’ve eaten bad shrimp?

Common signs of food poisoning include stomach cramps, nausea, diarrhea, and vomiting. Unfortunately, these are best-case scenarios. Severe food poisoning can also shut down your nervous system causing numbness in your body.

So again, never eat shrimp that you suspect is bad, let alone know is slightly off!

How can you tell if thawed shrimp is bad?

Once bad shrimp has been thawed, you will still easily be able to tell whether or not they are good.

If they have spoiled during freezing, they will have a bad smell, soft and squishy texture, and discoloration.

How To Tell If Frozen Salmon Is Bad