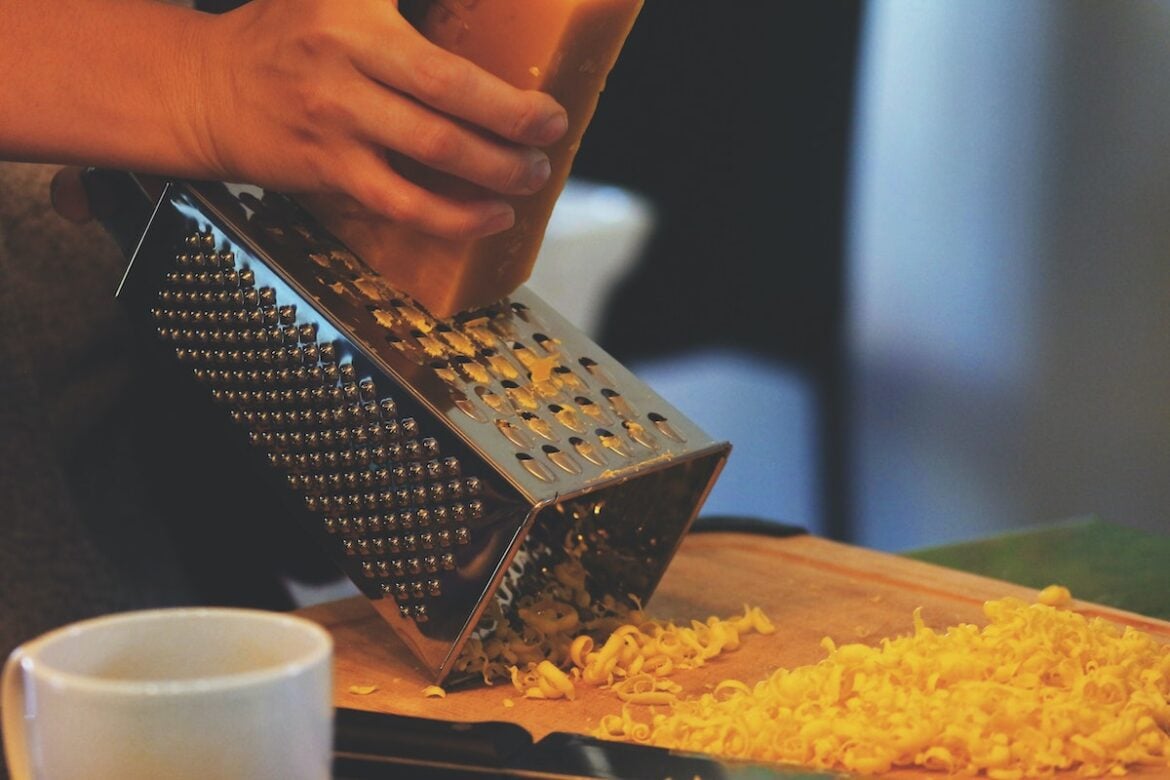 Hands up if you’ve ever found a pack of shredded cheese in the fridge that you just can’t remember buying! While shredded cheese can be stored for a fair while in the right conditions, it can be difficult to tell if it is still OK to eat.

But how can you tell if shredded cheese has gone bad? We have got all the answers and more for you! We will also look at how to store shredded cheese safely and how to keep it in the best possible condition.

What Is Shredded Cheese?

Shredded cheese is a versatile ingredient made by using a kitchen gadget to cut cheese into thin ribbons.

These smaller chunks of cheese melt more easily on pizza and pasta dishes than slices of cheese, and also taste great on sandwiches and sprinkled on salads.

Making shredded cheese at home is simple as all you need is a cheese grater or mandoline with a shredder attachment.

This means you can easily make your own shredded cheese in minutes, but if you’re a cook in a hurry you can buy pre-shredded cheese from the store as well!

The great thing about pre-shredded cheese is that it is often made using two or three different varieties of cheese, giving a tasty depth of flavor and great consistency.

It stores well in the fridge and is ready to use whenever you need a sprinkling of cheese.

However, many people have concerns about the additives in pre-shredded cheese, used to inhibit the growth of mold and prevent the cheese from sticking together.

So, if you’re trying to keep additives in your diet to a minimum, stick to shredding fresh cheese at home instead.

The great thing about making shredded cheese is that most types of cheese can be shredded, giving you the option of creating a great flavor profile in your recipe. Avoid very soft cheeses, such as ripe brie or camembert.

Any hard or semi-hard cheese can be shredded, as well as semi-soft cheeses such as Monterey Jack.

What Is The Difference Between Shredded Cheese And Grated Cheese?

You may see one recipe that calls for shredded cheese and another similar recipe that asks for grated cheese. But what is the difference, and does it matter which one you use?

The difference between shredded and grated cheese is the size and shape of the pieces of cheese.

However, these two terms are often used interchangeably, and what one person thinks of as shredded cheese might not be the same as the next person!

But does it matter which one you use?

Both shredded and grated cheese will give the same flavor to your dish, but the consistency might be slightly different.

If you are melting the cheese, finely grated cheese will disappear into a sauce, whilst shredded cheese might leave long, stringy pieces of melted cheese.

Not necessarily a problem, but it all depends on the effect you are going for!

If you want to swap shredded cheese for grated cheese, or vice versa, then this shouldn’t be a problem. Larger shredded cheese can be blitzed into smaller chunks in a food processor if necessary.

How Long Can Shredded Cheese Be Stored For?

How long can shredded cheese be stored for depends on several factors, including whether you have shredded the cheese yourself or bought it from the store, and if the packet of cheese has been opened or not.

The issue with shredded cheese is that the surface area of the cheese has been greatly increased by cutting it into thin ribbons.

This massively increases the risk of contamination with mold and bacteria. So, as soon as cheese has been shredded, it will start to deteriorate faster than a block of cheese.

Manufacturers of shredded cheese get around this problem by adding mold inhibitors, anti-caking agents, and moisture-reducing additives to the cheese.

This is why pre-shredded cheese always seems much drier and less sticky than the stuff we grate at home!

How Long Can Store Bought Shredded Cheese Be Stored For?

Store-bought shredded cheese will have a use-by date on the packet, and you should aim to consume your cheese before this date to enjoy it at its best.

Once the packet has been opened, the shredded cheese will start to deteriorate more quickly.

This means that it should be consumed within 5-7 days, even if the use-by date is longer than this. Keeping the cheese tightly wrapped in an airtight container will help to keep it as fresh as possible.

How Long Can Homemade Shredded Cheese Be Stored For?

Once you’ve shredded some cheese at home, it will start to deteriorate much faster than the block of cheese you grated it from.

This is because some contamination of the cheese is inevitable during the grating process, no matter how careful you are!

So, as soon as the cheese has been grated, bacteria will start to colonize and multiply on the moist surface of the grated cheese.

This is fine if the cheese is to be consumed straight away, but if it is left in a warm place the cheese will soon become inedible.

If kept in an airtight container in the refrigerator, shredded cheese should stay good to eat for 3-5 days. However, make sure to check it carefully for any signs that it might have gone bad!

Shredded Cheese Smells Like Feet – Has It Gone Bad?

Have you ever opened a bag of shredded cheese and got an intense hit of smelly foot odor?! Yuck! But does this mean the cheese has gone bad?

It all depends on the type of cheese that you have bought or shredded. Shredded cheese should smell just the same as the block of cheese it has grated from. And yes, some cheeses do smell like feet!

The cheese-making process involves the use of bacteria, and some use the same type of bacteria to turn the milk into cheese as are found on our feet.

This might sound disgusting, but it is how some of the finest and most famous cheeses in the world are made!

(And no, they don’t go around scraping people’s feet to get the bacteria. That really would be gross!)

So, if your shredded cheese smells the same as the cheese it was made from, no problem! But if a mild-smelling cheese has developed some stinky and unpleasant odors, it may well have started to turn bad.

How To Tell If Shredded Cheese Has Gone Bad

The most obvious sign that shredded cheese has gone bad is mold on the surface of the cheese.

This might show as blue or dark spots, or it could look like a fine web of white strands on the surface of the cheese. Whatever the type of mold, this cheese is past its best and should be discarded!

The normal odor of shredded cheese will depend on the type of cheese it was made from. It should smell exactly the same as the original cheese, and if it has started to go bad the odor will change.

Most shredded cheeses smell creamy, perhaps with a slight mustiness if mature cheeses were used. If the odor of your shredded cheese is remotely off-putting, it will not taste good on your food.

When cheese starts to spoil, the odor changes to something resembling sour, spoilt milk. This smell will be unmistakable, and there is no way you’ll want to eat your shredded cheese if it smells like this!

If things have started to turn really bad, your shredded cheese will feel slimy and mushy. At this point, the bacteria are multiplying out of control, and you definitely should not eat this cheese!

How To Store Shredded Cheese Safely

If you’ve got a stack of shredded cheese left over, you will want to store it in the best possible way to keep it fresh.

When shredded cheese becomes too warm it will sweat, causing it to stick together in an unappetizing lump. It will also deteriorate more quickly than whole lumps of cheese.

If you have bought shredded cheese from the store, it will normally contain an anti-clumping agent to stop it from sticking together.

Therefore, all you need to do is keep the cheese as fresh as possible in an airtight bag or container (like these ones). This should be stored in a refrigerator, and used before the ‘use by’ date on the bag.

For cheese you have shredded yourself, a small amount of corn starch can be added to act as an anticlumping agent. Pop the cheese and corn starch into a Ziplock bag, and give it a shake to ensure the cheese is evenly covered.

Can Shredded Cheese Be Frozen?

If you’ve got an excess of shredded cheese leftover from a party or family buffet, you might be tempted to pop it into the freezer to extend its shelf life. But is this a good idea, or will your cheese be ruined?

When cheese is frozen, the texture will be altered and it will not be as appetizing as the pre-frozen version.

Therefore, it is a good idea to only freeze cheese that is intended to be used in cooking. This way the altered texture will be disguised when the cheese melts into your recipe.

Up Next: How To Use Avocado Oil For Popcorn