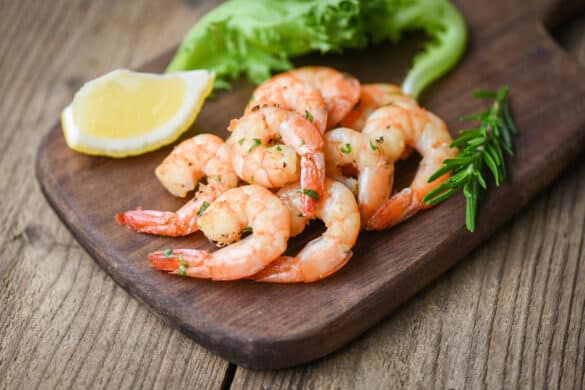 One of the most widely consumed seafood in the United States, and the world, shrimp are highly nutritious and loaded with a lot of dietary protein.

In addition to that, they are a rich source of iron, choline, calcium, and vitamin B12, making them great for brain, bone, and heart health. They are, however, high in cholesterol and iodine levels and must be consumed in moderation.

While it is agreed upon that shrimp are extremely delicious and nutritious, there’s a bit of confusion regarding what they are and which food group they belong to, especially among people with dietary restrictions and allergies.

So, is shrimp meat? Since meat is described as the flesh of an animal, therefore, technically speaking, shrimp is also considered meat. Shrimp belongs to the crustacean or shellfish food group and is often differentiated from other types of meat, mainly for religious purposes.

Read on to find out what shrimp is, if it is technically considered meat by definition, what food group it belongs to, and much more:

Shrimp belongs to the seafood food group and falls under a class of crustaceans known as decapods.

They are closely related to crab, lobsters, and crayfish, and are characterized by their semi-transparent bodies that have been flattened side to side.

Shrimp are often confused with prawns and, although they have more or less the same culinary uses, there are a few anatomical differences between the two.

In terms of their color, both shrimp and prawn are generally dull and can either be brownish, pinkish, bluish, or gray. When cooked, both can take on a reddish coral color.

Culinary-wise, they taste the same, apart from prawns being slightly sweeter than shrimp. Prawns are also slightly more expensive. They can, however, be easily substituted for one another.

Yes, shrimp is considered a type of seafood that umbrellas several species such as fish, crab, crayfish, prawns, lobsters, oysters, squid, and much more. They can also be classified as shellfish and should be avoided by people with shellfish allergies.

Also, if we’re going by the definition of meat, shrimp is considered a type of meat since it is the flesh of an animal.

From a vegetarian and vegan point of view, shrimp are considered meat.

No, shrimp is not considered a type of fish.

To make it easy for you to understand, just remember that all fish is seafood, but not all seafood is fish, and shrimp are a type of seafood. Simple!

Since shrimp don’t have an internal skeleton, a complex central nervous system, and are devoid of limbs, they cannot be considered fish.

Some common types of fish that are consumed in the US include Salmon, Tuna, Tilapia, Catfish, Pollock, Mahi-Mahi, Cod Herring, and Rainbow Trout.

Other than both fish and shrimp living in the sea, they have very little in common with each other. Their bodies and eating habits are very different and, although you might come across some individuals referring to shrimp as fish, it is not.

There are several species of shrimp (at least 300!) but only a handful are available commercially and used for cooking.

Here are some of the most common types of shrimp to help you choose the best ones the next time you go shrimp shopping:

A popular variety of shrimp obtained from the West coast of Florida, pink shrimp are, as their name suggests, pink when raw, although some may also be white or gray.

Also referred to as “salad shrimp” they are relatively smaller in size, have a mild and sweet flavor, and make a delicious addition to shrimp salad.

Primarily found in the Gulf of Mexico, brown shrimp have a firm texture and a brownish-red shell, and they turn pink when cooked.

They have a unique flavor compared to other types of edible shrimp that can range from mildly sweet to mildly salty. They are usually steamed or boiled in order to enjoy their natural flavor.

Growing as long as 8 inches, white shrimp come in three main varieties: Chinese white, Gulf white, and Pacific white shrimp. All of them have a blueish-green color that turns pink on cooking.

With a classic sweet flavor and firm texture, they offer a variety of delicious cooking options and can be boiled, steamed, stuffed, grilled, and fried.

Named so due to their hard shells, rock shrimp are often sold deshelled and cleaned since the process can be challenging to do on your own without the right tools.

With a firm texture and a sweet flavor, similar to that of a lobster, rock shrimp are considered an affordable substitute for an otherwise expensive lobster and its many varieties.

Native to Asia and Africa, tiger shrimp are identified by the stripes on their bodies that resemble the stripes of a tiger.

With a strong texture and moderate flavor, they are perfect for someone cooking shrimp for the first time. Some varieties can grow up to 12 inches long and are ideal for starters and appetizers.

Resembling a lobster in terms of their shape and color, spot shrimp are among the most tender types of shrimp and are extremely soft and juicy.

Often referred to as the “lobsters of Alaska”, some varieties can grow up to 12 inches long. They have an exotic flavor and sweetness that uplift the dish that they are added to.

They are, however, extremely difficult to clean and prepare because their shells tend to break easily if you are not careful enough.

Now that you know if shrimp is considered meat and what food group they belong to, here are a few additional questions we thought you might have!

What does deveining shrimp mean?

Fresh shrimp often have a dark vein running through their bodies, which is actually their digestive tract. It does not carry blood and is often filled with grit, serving the same purpose as human intestines.

Deveining shrimp refers to the process of gently scoring the skin right next to the vein and pulling it out with the tip of the knife.

It is a fairly easy process since the vein is located right under the backside of the shrimp. Of course, the difficulty level depends on the type of shrimp you are using and how hard its shell is.

Deveining is a personal choice, with many people opting for it because it ruins the presentation of their dish or because they simply don’t want to eat it, although it is completely harmless to eat.

Make sure to not cut right on top of the vein since it may cut the vein open and make the process super messy (and more disgusting than it actually is).

How long should you cook shrimp?

Shrimp is very easy to cook and is ready within minutes, which is why you need to keep a close eye on it to prevent it from overcooking.

Raw shrimp has a translucent look that starts to turn orange-red when introduced to heat, and the meat will turn completely white or a light orange-pink color.

One way to tell if shrimp is ready is that their tail will have curled in on themselves, forming a C-like shape, which may take around 2-3 minutes on each side.

Overcooked shrimp will be rubbery and not as much fun to eat. Make sure you use a bit of butter when cooking it for an added boost of flavor!

Up Next: Does Salt Kill Yeast?