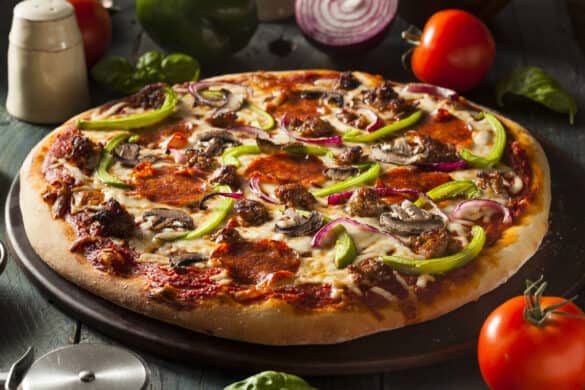 Frozen pizzas may look unassuming, but they are truly a magnificent product of modern manufacturing processes and food science.

But as food that always remains frozen (until it’s cooking time), can these pies spoil?

Does frozen pizza go bad? Frozen pizzas may not go bad in the traditional sense, but they can easily lose their flavor and texture over time. This usually happens due to oxidative stress, but if enough things go wrong during the storage period, they can also grow mold and harmful bacteria.

Read below to learn more about how frozen pizzas maintain their quality, the best way to store them at home, and how to check for spoilage.

How Are Frozen Pizzas Made?

Frozen pizzas are made using a series of large, industrial-grade machines that pump out dozens of half-baked or fully-baked pies within seconds.

Before the industrial era, pizzas were always meant to be handmade — and they had to be cooked right away to preserve their delicious flavor and delicate texture.

But as our understanding of industrial processes evolved, manufacturers discovered a clever way of maintaining the freshness and quality of pre-made pizzas by employing a few key storage best practices.

The journey of frozen pizza begins at ground level with a few common ingredients.

First, the crust is formed using a mixture of basic ingredients. Each manufacturer has its own method of producing dough — and most consider their recipe a closely-guarded secret!

While the pizza may be able to survive without preservatives once frozen, it may not be able to hold its quality for longer than a pie that contains the necessary food-safe chemicals to preserve it.

Once shaped into a crust, dozens of pies are then transferred into a large oven that cooks the dough from all sides. This process also kills off any lingering bacteria on and around the surface of the crust.

After this step, a series of machines add the sauce, toppings, and other ingredients before the pies are ready for the next stage.

This is where things get chilly!

The finalized pizzas head towards an industrial cooling cell that freezes the pies at -25°F for around 20-30 minutes. Each pie comes out frozen and is then checked for irregularities.

Then all that’s left is to package the prepared pies in airtight plastic bags and ship them to nearby stores!

The pizzas travel from the factory floor to stores in temperature-controlled vehicles that keep the pizzas frozen. The stores then offload the pies and store them in individual chillers.

Once you purchase a fresh frozen pizza, its quality and safety fall into your hands.

This is also usually when the chances of spoilage increase!

As soon as the pies leave the chiller, they start to thaw. This is why we recommend that you put all frozen items at the end of your grocery list so that they remain frozen for as long as possible.

Leaving a frozen pizza in the cart while shopping or running errands before reaching home can easily compromise the quality of the pie.

The frozen pies may be able to survive for up to 1-2 hours at room temperature before they require refrigeration.

We recommend either heating freshly bought frozen pizza the same day – or you could also just store the pack at 0°F up to the best-before date.

Frozen foods don’t necessarily have an expiration date because once frozen, most foods can’t grow harmful bacteria. But they do lose their original flavor and even texture over time.

It is a natural process that occurs due to oxidative stress. Oxidization occurs when air slowly leaks into the packaging, which naturally ages the ingredients.

This is why most frozen foods have a “best before” date which indicates the quality, not the safety of the product.

When it’s finally time to make a frozen pizza, you should always keep a few things in mind to increase the shelf life of uncooked leftovers.

If you bought a pack with 2-3 frozen pizzas, then we recommend that you take out the required number of pies within a few minutes and then refreeze the remaining pizzas without letting them sit for more than 10 minutes.

This may seem like overkill, but once the pizzas are out of the chiller, they will quickly start to thaw depending on the ambient temperature and weather conditions.

Another reason why you would want to work as quickly as possible to refreeze the pies is to avoid freezer burn.

Freezer burn happens in the presence of moisture. As the pies thaw, they will accumulate moisture via condensation — and while this may not seem like a big deal, even a layer of moisture can result in disaster!

As the pizza refreezes with added moisture, some of the excess water will evaporate while the leftover water molecules will crystalize.

During this process, the combination of freezing temperatures and air ends up sucking out all the moisture from the ingredients.

So, how do you eliminate freezer burn?

The best way to avoid freezer burn is to move the leftover pizzas into an airtight container. Even if the pies have condensation, the lack of air won’t form a thick layer of ice over them.

You could use either an airtight freezer-safe bag or a container to prevent this from happening. Remember: the pies usually come in a sealed plastic bag, so they are likely to remain fresh so long as they are kept away from the air.

Frozen pizzas usually have very subtle signs of spoilage since they spend most of their storage life inside a freezer.

But there are a few things that you need to look out for before heating a frozen pie.

Most frozen pizzas have preservatives and additives that keep the pie from changing color, but older frozen pizzas may take on a duller appearance.

This doesn’t necessarily mean that the pie has gone bad, but it may affect its flavor and overall quality.

Dark discoloration, on the other hand, may indicate spoilage!

The truth is, freezing pizza isn’t an exact science and there are a lot of variables to account for in a home setting.

The best you can do is to keep the pie at the back of the freezer so that it remains safe from slight temperature discrepancies as you access the freezer.

If you notice green, gray, or other unnatural discoloration around the pie, then this would indicate that the pizza has gone bad.

Don’t forget to inspect the bottom of the pie too because that is usually the most overlooked area and the easiest to spoil.

Fresh frozen pizza should smell like, well, pizza. Nothing more, nothing less!

If there is even a faint foul odor then this would indicate that the pie has grown harmful bacteria. To minimize confusion, we recommend storing the pies away from strong-smelling foods.

This characteristic isn’t necessarily linked to spoiled pizza, but it may indicate that the pie has lost its structural integrity — and probably also its flavor.

A crumbly crust usually means that the pizza has either gone past its “best before” date or that it has been considerably affected during the storage period due to temperature variance.

We recommend throwing out these types of pies because they are very difficult to salvage and will likely not taste great either!

If you notice a subtle layer of slime or oiliness around the frozen pie, then this would likely indicate that the pie has gone bad, even if it doesn’t show other signs of spoilage.

Frozen pizzas are an extremely convenient way of enjoying fresh pizzas on demand, but they require proper storage protocols to get the most out of their shelf life.

Now that you know how frozen pizzas can go bad, here are some related questions regarding the topic.

Can you eat pizzas with freezer burn?

Yes. Freezer burn happens due to a mixture of air and moisture on the pie which affects its flavor and texture but doesn’t necessarily compromise its quality.

We don’t recommend that you consume pies that have freezer burn because they will likely not taste great. Don’t bother removing the extra frost over the crust either because the damage has already been done!

Can cooked pizzas be refrozen?

Yes. Heated frozen pizzas can easily be stored in the fridge or freezer.

We recommend storing leftover slices in an airtight container at 40°F when storing in the fridge. Consume all leftovers within 1-2 days for the best flavor.

You can also freeze the leftover slices by moving them into a separate airtight container and storing it at 0°F for up to 2-3 weeks.

Do not refreeze thawed frozen pizza that you didn’t end up cooking — it will likely not freeze well due to the added moisture and may become soggy the next time you thaw it.

Can You Freeze Papa Murphy’s Pizza?

How To Par-Bake Pizza – The Ultimate Guide

Pizza Crust – The Complete Guide To Every Type

Can You Freeze Matzo Balls?