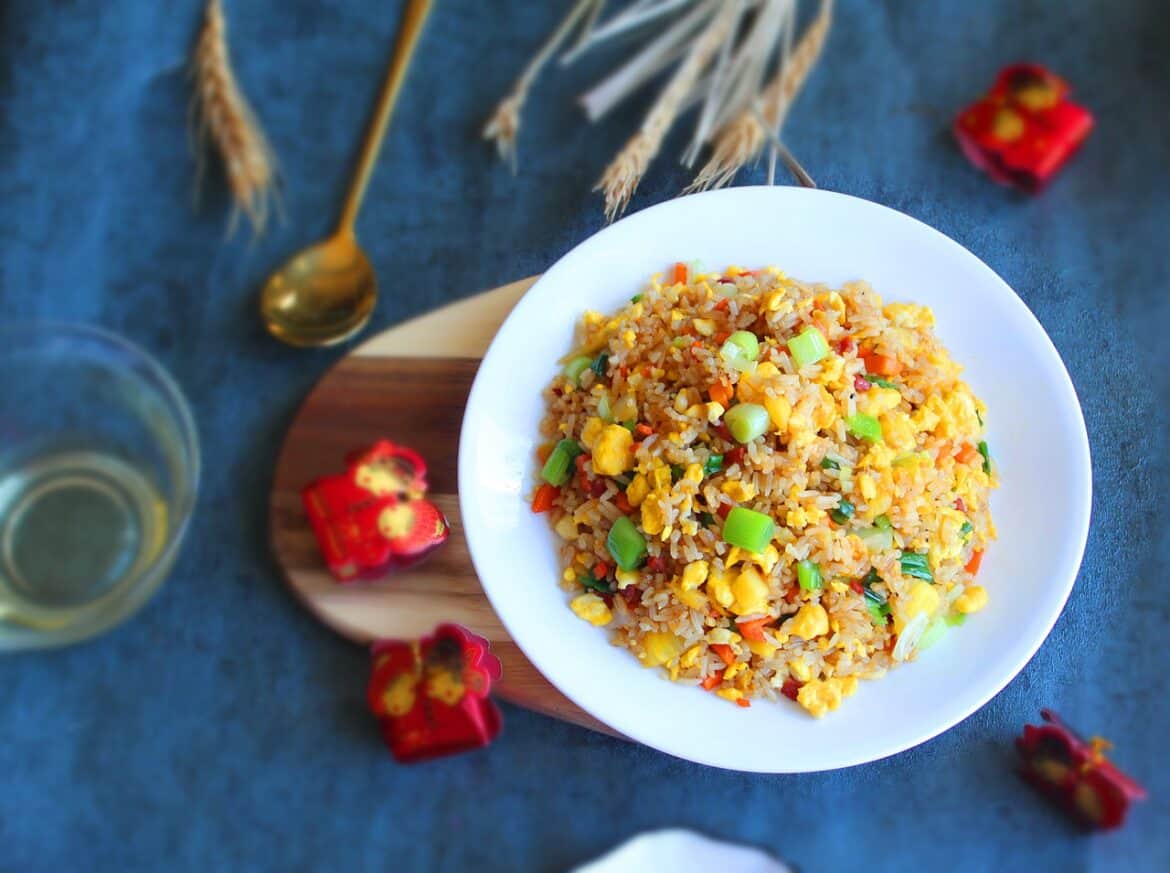 Attempting to recreate your favorite Chinese takeout dishes at home can be a fun challenge, but oh-so-disappointing when it all goes wrong!

Fried rice is one of those recipes that sounds super simple, but many of us end up sadly staring at a bowl of soggy, mushy rice.

But why is the fried rice mushy? Fried rice becomes mushy if there is too much moisture in the dish, which can be due to using overcooked or freshly cooked rice, cooking a large batch in a small pan, or using ingredients with too much moisture. Mushy fried rice can be fixed by frying it in smaller batches or baking it in the oven.

If your fried rice is a far cry from the light, golden grains you’re used to getting from your favorite takeout place, don’t panic!

We’ve got everything you need to know about making the perfect fried rice right here, including how to rescue a mushy batch of fried rice.

What Is Fried Rice?

Fried rice is a popular dish consisting of cooked rice that is stir-fried in a wok or frying pan.

It is normally fried alongside other ingredients such as vegetables, seafood, meat, or eggs.

The origins of fried rice can be traced back to the Sui Dynasty in China, over 1600 years ago. Since then, it has become a popular component of many cuisines, particularly across Asia!

On its own, it combines deliciously flavored rice with crispy vegetables and a protein source, such as meat or egg. This makes it a nutritionally balanced meal!

Simple fried rice is served as a side dish in many Chinese restaurants, to go alongside classic dishes such as sweet and sour, chop suey, and kung pao.

Some Chinese fried rice recipes include the addition of a sauce that is poured over the cooked rice.

More elaborate versions include slices of meat and seafood and are intended to be eaten alone.

How Is Fried Rice Made?

The joy of fried rice is that it is really simple to make and makes good use of leftover ingredients. If you have a batch of cooked rice in the fridge, you can cook up a delicious fried rice dinner in a matter of minutes!

Fried rice is always made using rice that has been pre-cooked, either in boiling water or in a steamer.

It is then cooked in a thin layer in a large wok, alongside additional ingredients such as vegetables, meat, and seafood. To prevent it from sticking, a mild-flavored oil is used — normally vegetable oil, ghee, or sesame oil.

Many different seasonings and aromatics can be added depending on the type of cuisine and recipe you are following.

Alliums such as onions, shallots, or garlic are normally included, as well as fresh or dried herbs and spices. Rich, umami sauces like oyster sauce or soy sauce add richness and depth of flavor.

When it comes to fried rice, goes without saying that the all-important factor is the way the rice is cooked. This can make or break this traditional recipe, and getting the right texture is vital!

Once cooked, the fluffy grains of rice absorb all this flavor and develop a slightly crispy, browned exterior. The individual grains should be easy to separate without sticking together in a clump.

What Is The Best Rice For Fried Rice?

Interestingly enough, the type of rice used to make fried rice varies according to the region the recipe comes from.

The rice served in Chinese restaurants is normally made with American long-grain rice, whereas Thai dishes normally use Jasmine rice.

Basmati rice is used for Indian fried rice recipes, whereas Japanese fried rice is made with short-grain rice.

The key to making the perfect fried rice is to select a variety of rice with grains that do not stick together when cooked.

The most foolproof option is to use a type of long-grained rice. Short-grained rice tends to be stickier and is more often used for dishes such as risotto or rice puddings.

But if you’ve got some leftover rice of a short-grain variety, you don’t need to let this go to waste. It can still be used to make perfectly delicious fried rice, although it might not be quite as light and fluffy as the long-grain version.

Rice should always be pre-cooked when making fried rice, using any of the normal methods such as steaming or simmering in water.

In restaurants, rice will be cooked up in large batches the day before and left to cool overnight. This step is key to creating fried rice with the perfect texture!

Although fried rice sounds simple enough to make, things can easily go wrong. After all, we are attempting to fry a pre-cooked, soft, starchy foodstuff. Can you imagine if we suggested that you fried pasta or couscous in the same way?

If you’ve ever attempted to cook fried rice only to end up with a lump of mush in the bottom of your pan, you are not alone. The high water content of cooked rice means it can be difficult to turn it into light, crisp, fluffy individual grains.

Mushy fried rice can be due to one of several mistakes during the cooking process, but these all link back to the same thing — too much moisture!

The very best fried rice is made using rice that is cooked the day before and allowed to cool.

When rice is left to stand, it will start to dry out, resulting in lower moisture content. This helps the individual grains to stay separate in the pan, creating light and fluffy fried rice.

However, you can take a sneaky shortcut by steaming some rice and laying it out on a baking tray to cool. This will allow some of the moisture to evaporate, reducing the risk of your fried rice becoming mushy.

Overcooked rice will retain too much moisture, so this could be one of the prime reasons why your fried rice becomes mushy.

This is a particular problem when the rice has been boiled rather than steamed.

If you are cooking up a batch of rice specifically to make fried rice the following day, cook it until it is al dente, but not soft.

Each grain should have a tiny bit of “crunch” in the center, and not be so soft that you can squash it easily with your fingers.

When you start to fry cooked rice in your pan or wok, each grain of rice will start to release moisture in the form of steam.

It is essential that this steam can evaporate quickly, otherwise it will turn the rest of the rice mushy and unpleasant.

This is why the best chefs always cook fried rice in small batches in a large pan. The large surface area means that more of the rice is in direct contact with the heat at any one time, and any steam can freely evaporate.

This can be a particular problem if you include moisture-rich vegetables such as onions, zucchini, or bell peppers.

For the best results, the rice should be the first ingredient that goes into the pan so it gets a chance to seal on the outside before any other ingredients are added.

You could consider pre-cooking any moisture-rich vegetables before they are added to the rice to reduce their moisture content.

How To Fix Mushy Fried Rice

Once fried rice starts to go mushy in the pan, you may have to give up your dreams of light and fluffy golden fried rice.

However, there are certain things you can do to rescue this situation and prevent your efforts from going to waste.

If you suspect the mushiness is due to trying to cook a large batch in one go, split the batch into two pans.

Add a splash of oil and keep the heat high to encourage moisture to evaporate so your rice will become crispy. Any mushy rice may be clumped together slightly, but you should still get a tasty dinner.

An alternative is to stop cooking the rice on the stovetop and to switch to the oven instead.

Lightly grease a large non-stick baking sheet, and spread the rice over it in a thin layer. Cook the rice at 350°F for around 5 minutes, until all the moisture has evaporated and the rice is crisp and golden.

How To Prevent Fried Rice From Becoming Mushy

The secret to the perfect fried rice is to keep moisture to a minimum and keep the heat consistently high — the rice should have been cooked the day before and allowed to cool overnight.

The best cooking method to use is to steam the rice until it is al dente but not overly soft. Transfer the rice to a large baking tray and leave it uncovered overnight in the refrigerator.

When it comes to cooking your fried rice, the cooked rice is the first thing that should enter the pan. Use a large wok and cook small batches at a time in a thin layer of oil, along with any dry seasoning ingredients.

The depth of rice in the wok should be no more than an inch or so to allow the maximum number of grains to be in contact with the heat at any one time.

Using a large spatula, toss the rice gently as it cooks. Take care not to squash or damage the grains — you are aiming to keep them intact.

If you’re adding other ingredients, these should not join the rice until it is golden and developing a crispy exterior.

Ingredients with a high moisture content such as vegetables should be precooked beforehand. Any liquid ingredients should not be added until the very end of the cooking process.

Follow these simple steps and you are guaranteed to create the perfect fried rice, every time!

How To Reheat Fried Rice – The Best Way

The Best Rice For Chinese Food

How Much Does Rice Expand?

The Best Oils For Fried Rice