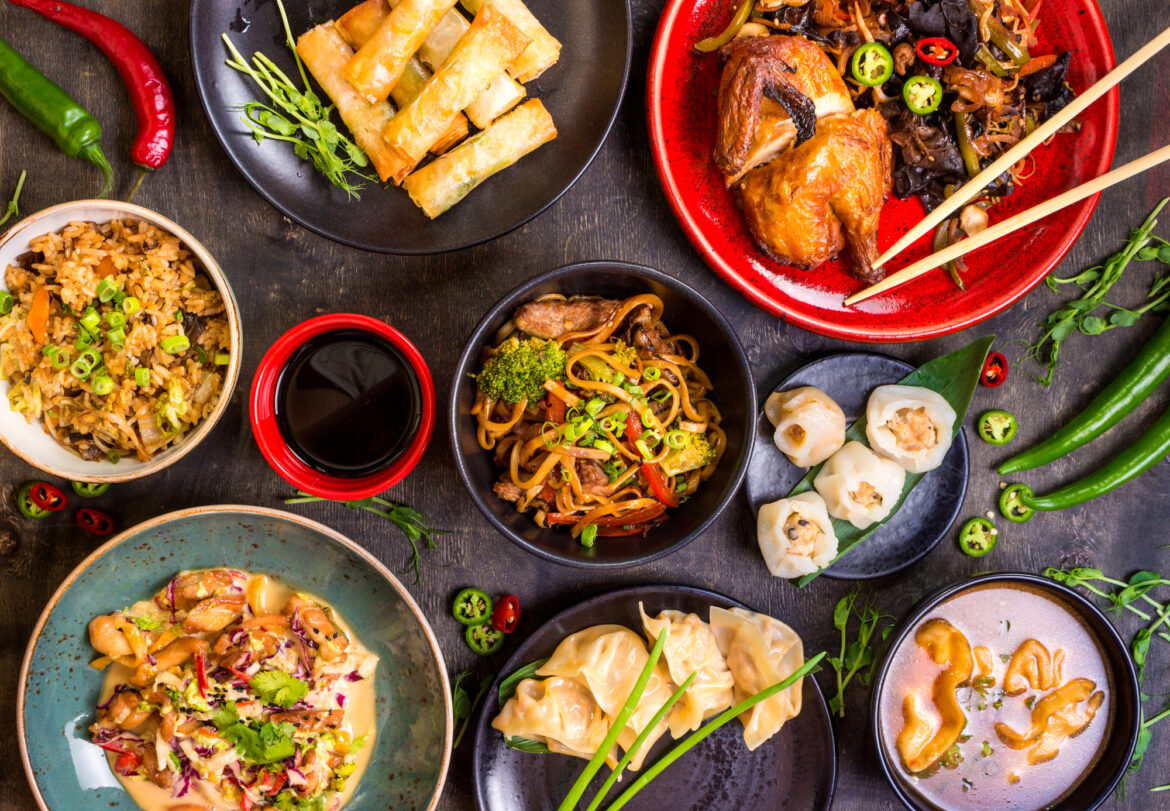 When we’re thinking about ordering take-out, there are two common options that are usually thrown around: Thai and Chinese.

These two cuisines may have a lot of similarities, but they are deliciously unique. Since China and Thailand are geographically close, they have exchanged cultures over centuries – this intermixing has had an influence on the food, too!

Thai food vs. Chinese food, what are the key differences? Thai food is known to be spicy, complex, and curry-laden. Chinese food is all about stir frying, deep-frying, umami flavors, and delicious noodles. Both cuisines share ingredients, recipes, and techniques, but each has a signature flavor.

Is your mouth watering yet? Let’s dig in!

The Ideology Behind Thai Food

If you examine Thai food, you will notice that this cuisine is all about balancing flavors.

Thai people indulge in complexity and combinations when it comes to their food. They like having different healthy ingredients and flavors in their dishes, and there is hardly ever a straightforward curry or a noodle recipe.

Thai food can be described as finding order in chaos. It is an ideology of bringing together different things to make a whole, which is why it is not just food, but also a belief system.

Thai food quickly became popular in the Western world because of its use of healthy ingredients and flavors.

This type of food inspires the senses and hits the gustatory system like no other. People trying it for the first time describe it as being a complex rid, a journey full of richness and spice. Take Pad Thai, as an example.

Pad Thai is a famous street food across Thailand; it’s even the national food. It is a mixture of stir-fried rice noodles with vegetables, scrambled eggs, peanuts, shrimp, and bean sprouts – but that’s just the basic recipe!

When making Pad Thai, a wide variety of ingredients can be added to heighten the flavor. The fun part is that they all work to create a cohesive flavor instead of individual ingredients fighting for the spotlight; this is the genius of Thai food.

Thai food is known to be spicy; you will typically find dried or whole spices in curries or other recipes. There are always multiple ingredients working behind the scenes when it comes to any Thai dish, even if they have a small cameo role.

For example, Khao Pad can be compared to Chinese fried rice. Instead of long-grain rice, it uses a mixture of jasmine rice, shrimp, peanuts, and veggies. It’s perfect to pair with curries – which are also loaded with lots of ingredients!

You might have noticed that there is almost always fish meat included in many Thai dishes. This is true as fish, shrimp, and prawns are a huge part of the Thai diet. But at the same time, there are also many vegetable and fruit dishes.

Som Tam, for example, is a spicy salad dish that is made by shredding unripe papaya and mixing it with spice, lemon zest, palm sugar, and fish sauce. This dish was even listed at number 46 on the world’s 50 best foods by CNN Travel!

There are similarly dozens of famous rice, curry, meat, soup, and salad recipes that make Thai food highly unique and desirable – not just in Southeast Asia, but also in North America.

Of course, we can’t just talk about Thai food without mentioning Chinese!

Chinese Cuisine And Its Influence

As mentioned, China and Thailand go back centuries. Their cultures mixed due to the immigrants and traders who have brought ingredients, techniques, and recipes to and from each country since the Ming Dynasty.

It isn’t surprising that these cuisines have many similarities when it comes to style and the choice of ingredients due to their shared history.

For example, the humble wok and the cooking techniques of deep-frying and stir-frying were mostly brought to Thailand by Chinese immigrants.

Chinese food can be best described as a focus on maximizing ingredients using umami-laden flavorings and superior cooking techniques, from stir-frying vegetables and noodles to fermenting soybeans to make soy sauce.

This cuisine brings out the best in food using sauces, noodles, and rice recipes. It can also be a bit on the heavier side, as this cuisine is known to use a lot of oil while cooking meat or vegetables.

Chinese food also focuses on cooking time as most recipes, apart from broths, are designed to be cooked fast over high heat.

Like Thai food, Chinese cuisine is all about vegetables and healthy ingredients. However, you will notice considerably less use of curries and more use of oil, soy sauce, and other umami flavorings.

Chinese food is extremely popular in the Western world and is known for its variety of comfort foods like Chow Mein, dumplings, wontons, Ma Pa Tofu, spring rolls, and much more.

An interesting point is that Chinese food in the United States is not known to be authentic. Yes, it is based on Chinese cuisine, techniques, and ingredients, but it is usually a unique and local take on it. Case in point: Chop Suey.

Chop Suey, erroneously thought to originate from China, is an American invention. The combination of stir-fried meat, vegetables, and seasonings with steamed rice was created in Chinese restaurants in the US, then served in China.

The same can be said about General Tso’s Chicken and Sesame Chicken, which are extremely popular dishes. They were made just for the taste palette of Western diners – and don’t even get us started on fortune cookies!

Don’t worry, there are plenty of authentic Chinese dishes served around the rest of the world. There are plenty of recipes for Dim Sum, noodle dishes, spring rolls, Szechuan Chili Chicken, and more, which are all famous for their unique flavors.

For example, Peking roasted duck is world-renowned as it celebrates the versatility of Chinese food and shows a different side of the cuisine. This recipe has been adopted in many regions and is even the national dish of China.

The truth is, many people take inspiration from Chinese culture and its cuisine. It is no secret that the techniques, flavors, ingredients, and combinations used in this culture are what made American-Chinese cuisine possible.

As mentioned, the influence of Chinese cuisine is very strong and it has also touched Thai cuisine in many ways. The reverse is true as well – you simply can’t talk about one cuisine without discussing the other!

If we were to boil everything that we have discussed and make a chart, it would come down to a few important distinctions that make each cuisine stand out.

Here are the key differences between Thai and Chinese cuisines:

Both Chinese and Thai food are an integral part of many people’s diets all around the world and both are known as “global cuisines.”

There will always be regional adaptations, inventions, and changes in recipe, so even though there are some similarities in Chinese and Thai food, each cuisine celebrates food a bit differently!

Now that you know the main differences in each cuisine, here are a few related questions regarding Thai food and Chinese food.

Does Thai food take inspiration from other cuisines?

Yes. Thai food is not only influenced by Chinese cuisine, but is also an amalgamation of Indian and Portuguese cuisines as well.

These influences are not immediately apparent, but have been shaped over centuries and can be seen in the context of techniques, spices, and ingredients. Similarly, you may even find a touch of Thai cuisine in other cultures too.

Can you find Chinese restaurants in Thailand?

Yes! There are plenty of Chinese restaurants located all over Thailand. Both cultures share similarities and you can also find signboards that have both Thai and Chinese written on them.

Chinese restaurants in Thailand are quite popular and serve many authentic and regional dishes. The same can be said about Thai restaurants in China, too. There are even street vendors in Beijing that serve authentic Pad Thai!

Traditional Thai food is generally considered to be the healthier option of the two since Thai food uses way less oil, different veggies, and low-sodium ingredients.

However, both cuisines may be altered to fit the palettes of different regions, which means that you can come across several recipe variants with unhealthy ingredients or other fatty additives.

For example, traditional Chinese food isn’t generally unhealthy (even with the use of oil), but some regional recipes may go heavy on high-carb and low-nutrition recipes, such as Crab Rangoon, Lo Mein, or a large serving of fried rice.

How Long Is Chinese Food Good For? (And How to Keep It Fresh)