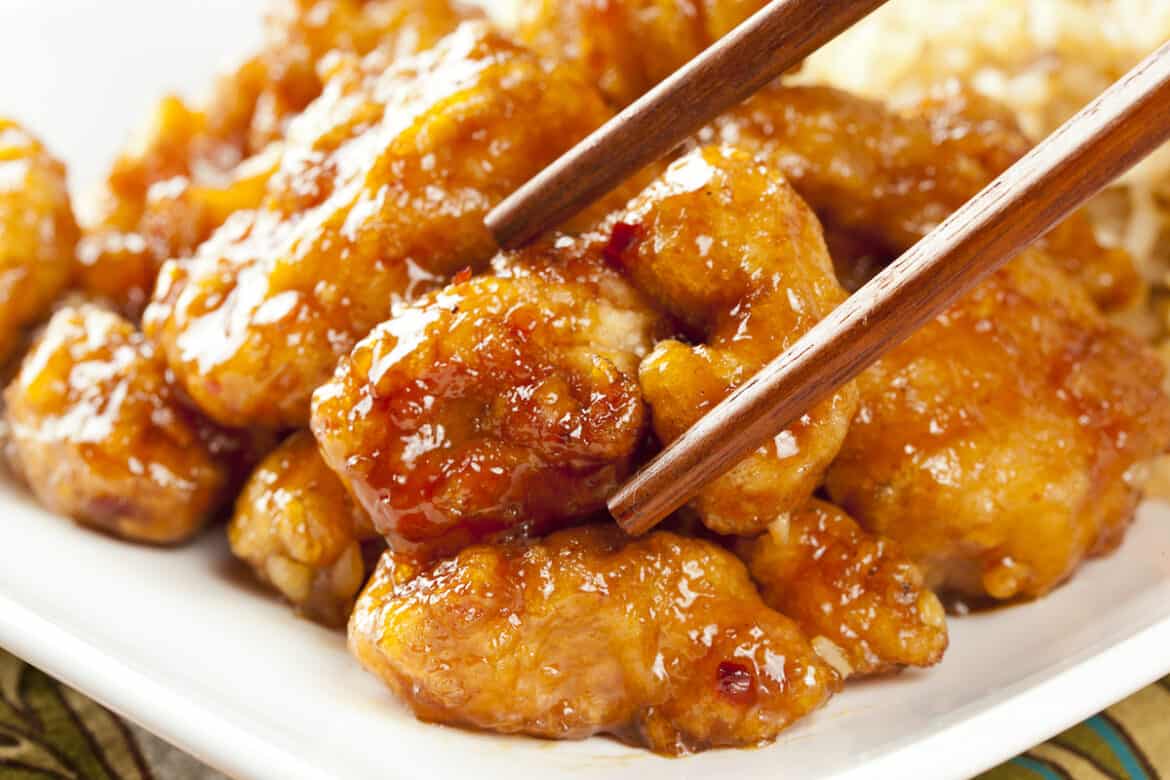 If Chinese takeout is on the cards for dinner, then you might be tempted to choose orange chicken or sweet and sour chicken.

To the untrained eye, the two seem very similar, but they are completely different dishes that are both delicious!

Knowing the difference between orange chicken and sweet and sour chicken will help you pick out which one best suits your taste buds, and which one you should order next.

Read on to find out more on the differences between orange chicken and sweet and sour chicken, so you can better understand the two dishes, and know which one to make or order next!

Orange chicken is a dish that originated in China but is now a very popular Chinese-American dish. It is packed full of flavor and has a sweet and tangy sauce, which is drenched over breaded chicken chunks.

Before orange chicken is made, the bones and skin are removed from the chicken, and it is then cut down into small, bite-sized chunks.

The chicken is then usually breaded and fried until it is cooked. Each bite-size piece of chicken is dipped in a seasoned batter and then deep-fried until crispy and golden.

Once cooked, the chicken pieces are then tossed in with the special sauce and cooked for a few minutes until the chicken absorbs the flavors.

Not all orange chicken recipes feature breaded chicken, and the chicken pieces can be fried as-is and then added to the sauce.

Orange chicken sauce is usually made from a blend of orange juice, sugar, vinegar, soy sauce, and added spices such as ginger, garlic, red chili flakes, and extra orange zest for flavor.

The amount of each spice and ingredient used can differ depending on if you prefer a sweeter or more citrus sauce. How much chili is added will also depend on how spicy you like your food!

The resulting sauce is citrusy and sweet, with just a hint of heat to balance it all out. Mixed in with the chicken, the saucy orange chicken can be served over steamed rice with some vegetables on the side.

Sweet and sour chicken is a popular Chinese dish that has been around for ages. It is now an incredibly popular dish around the world, thanks to its complex taste and balance of flavors, and the fact that it is just downright delicious!

Chicken breasts or chicken thigh meat is deboned and removed of skin before being cut into bite-sized pieces.

The cooked chicken pieces are then tossed in with the sweet and sour sauce before being served. It is best to leave the chicken to sit in the sauce for a few minutes so that it absorbs the flavor of the sauce fully.

Sweet and sour sauce can vary depending on the recipe being used and what you prefer, but it should have a balanced set of flavors from sweet and sour ingredients.

The most popular ingredients used are ketchup, lemon juice, sugar, soy sauce, and apple cider vinegar. Salt and garlic, and sometimes ginger, are added in for extra flavor.

There are also some sweet and sour recipes which include pineapple chunks or pineapple juice, sliced onions, and bell peppers, which give the dish more depth and flavor.

Sweet and sour chicken can be enjoyed as is, eaten out of a takeout container on the go, or it can be turned into a hearty meal served over some steamed white rice and some vegetables on the side.

Some sweet and sour chicken is served with the chicken battered and deep-fried, and the sauce served on the side for dipping.

The Difference Between Orange Chicken And Sweet And Sour Chicken

There are a few similarities between sweet and sour chicken and orange chicken, but they are two different dishes, and to be able to tell them apart, it helps to know how the two dishes do differ.

Orange chicken is made using skinless chicken chunks, either breast or thigh meat, which can be breaded and deep-fried. The sauce is made using orange juice, soy sauce, ginger, garlic, vinegar, chili flakes, and orange zest.

Sweet and sour chicken is made using skinless chicken, either breast or thigh meat, which can be breaded and deep-fried or not.

The sauce for sweet and sour chicken can vary, but mostly it is made from soy sauce, sugar, vinegar or lemon juice, ketchup, salt, garlic, and sometimes pineapples or peppers.

Orange chicken has more of a citrus flavor, which is focused on the orange juice and orange zest included in the sauce, rounded with some heat.

Orange chicken does contain more heat than sweet and sour chicken, as the recipe calls for red chili flakes to be included. How much you add depends on how much heat you like in your food.

Sweet and sour chicken does not always contain chili flakes, and it can be made without any at all. However, if you do like some spice in your food, then you can add chili flakes to the sweet and sour sauce you are making.

Similarities Between Orange Chicken And Sweet And Sour Chicken

Other than the differences between orange chicken and sweet and sour chicken, there are quite a few similarities between them as well.

Both orange chicken and sweet and sour chicken originated in China. Both have been brought over to the United States where the recipes have changed slightly, but both have become staple meals enjoyed by many.

Made In A Similar Way

Sweet and sour chicken and orange chicken both start off by de-boning and skinning chicken breasts or thigh meat.

These are then cut into bite-sized chunks, battered and deep-fried. The chicken can also be left without breading and just fried as is.

Served In A Similar Way

Sweet and sour chicken and orange chicken are both popularly served over steamed white rice, and both often have a side of fresh veggies as well.

Sweet and sour chicken can also be served with the chicken cooked and then dipped into the sweet and sour sauce which is served on the side.

Now that we’ve gone over the differences between orange chicken and sweet and sour chicken, let’s take a look at a few related questions on the subject!

Is General Tso the same as sweet and sour chicken?

The sauce is a little sweeter as well, with less of the sour notes.

What is the difference between orange chicken and sesame chicken?

Orange chicken and sesame chicken are fairly similar, but the sauces are different. Orange chicken does not usually contain sesame seeds, and is made with orange juice and sometimes orange zest.

The sauce of sesame chicken is also sweet, but it does not include any orange at all.

Up Next: Spam Vs Pork Roll – What’s The Difference?

Carrot Ketchup – How Does It Compare? (With Recipe)