Why Is My Peanut Butter Watery? 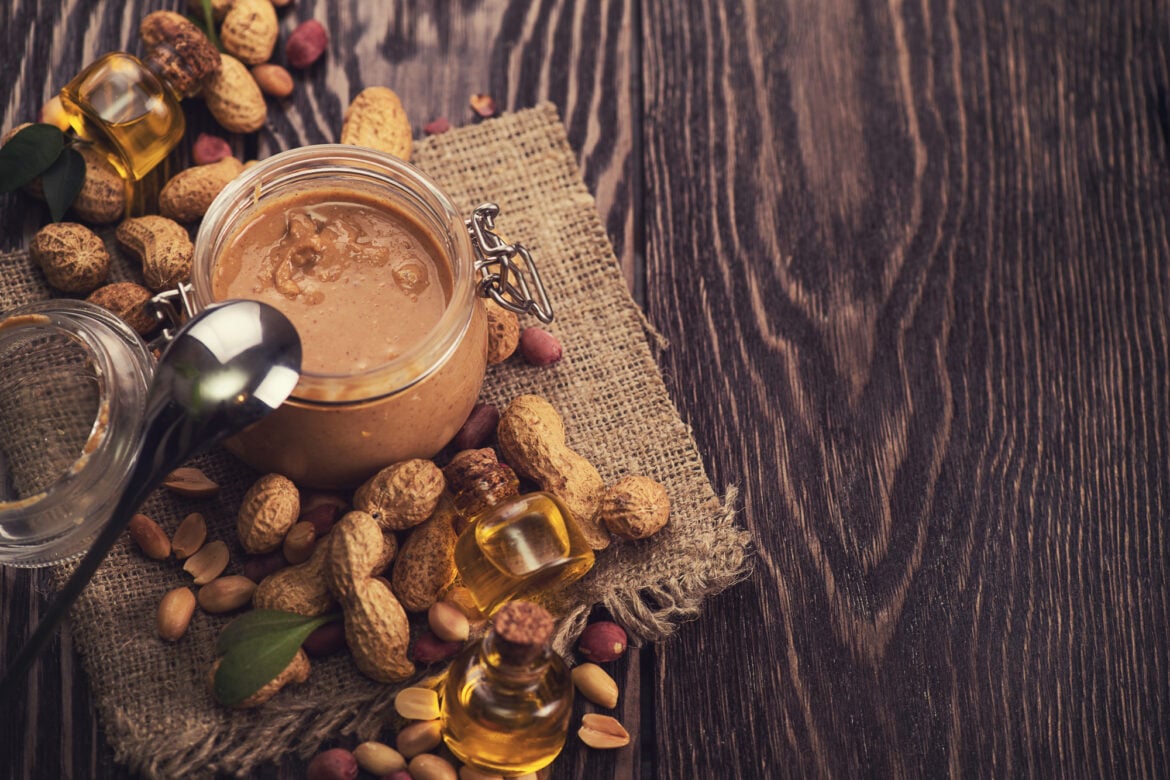 Have you ever noticed a layer of watery liquid on top of peanut butter? It might not be what you think it is!

Why is my peanut butter watery? The liquid on top is oil, not water! Peanut butter typically does not contain stabilizers or emulsifiers, especially when homemade. When the natural oils separate, a layer forms over the mixture. It is completely safe to eat; just mix it back in before using it!

Read below to learn more about why peanut butter separates, how it’s made, and how you can keep it from separating!

How Is Peanut Butter Made?

To answer the question of why peanut butter separates, we need to dive into the process of making peanut butter, which will help explain why the oil pools on top!

Peanut butter is made by blending peanuts and other flavoring ingredients until you get a smooth paste called peanut butter.

That’s right, peanut butter is extremely easy to make! All it takes is roasting fresh peanuts (or buying them pre-roasted) and then blending them in a food processor along with vegetable oil, salt, and sugar.

We can, of course, dig a little deeper. So how exactly do solid peanuts turn into a liquid-like paste? The answer is oil — peanut oil to be precise!

Peanuts contain a considerable amount of plant fat, which is stored within its natural oils.

When you blend the peanuts, the centrifugal force along with the friction created during the blending process releases all this stored oil.

You might be wondering: if peanuts already contain a lot of oil, why do we need to add vegetable oil to the mix?

The thing is, peanut butter requires a bit of “push” before it releases its natural oils. The added vegetable oil prevents the mixture from seizing and can also help add a richer texture!

In some cases, you can get away without added oils. But for this to work, you will need a very powerful blender that can quickly blend and heat the peanuts without letting them seize!

After a few minutes into the blending process, the released oil starts to blend in with the solid peanut chunks, which turns them into a paste.

This “paste phase” is when you would normally add any flavorings (ex. sugar, honey, cane sugar, etc.) and a pinch of salt.

The best part about making homemade peanut butter is that you can adjust the flavorings on the fly!

Stabilizers and emulsifiers are chemical ingredients that help bind things that don’t want to be together. Think of how oil and water can’t mix — in the same way, peanut oil also separates from peanut butter!

Commercial peanut butter brands use emulsifiers to keep their product from separating, which provides their predictable and uniform consistency.

Peanut butter oil can separate for other reasons. For example, ambient temperature plays a huge role in the separation of oil!

The oil is most likely to separate with freshly made, warm peanut butter or when it is stored in the fridge. It can also form when peanut butter is left untouched over the counter for several hours (or days).

Some brands opt for a more natural approach, where they will use organic peanuts along with no added sugars and all-natural ingredients.

These particular commercial products will usually not contain hydrogenated oils, stabilizers, or preservatives to keep the peanut butter from separating, which will lead to the formation of oil just like homemade peanut butter.

How To Fix “Watery” Peanut Butter

If you’re really not into oil forming on top of your peanut butter, even if it’s perfectly safe and natural, don’t worry! We get it and we’re here to help.

Here are a few ways that you can “fix” split peanut butter.

This method is the most obvious choice since it’s the easiest way to fix separated peanut butter.

All you need is to mix your peanut butter and any separated oil for a couple of seconds until all the oil has disappeared — then continue using the peanut butter as you normally would!

We recommend mixing it vigorously and for a bit longer than you would think. This will ensure that the oils are fully mixed back in with the peanut butter, which will create a creamier texture and even add back some of the lost flavor.

Switch Up Your Storage Style

Here’s a method that is both clever and quirky: when storing peanut butter, just keep the bottle upside down every time you’re done using it!

This is a clever method that many people use for their peanut butter. The upside-down method will allow the oil to pool at the bottom of the jar instead of the top – so when you turn it the right way up, the oil will actually be at the bottom!

From there, just give the mixture a good mix (or not, your call) and then use it as you normally would.

Remember when we said that you need to add vegetable oil to get the blending process started? If you use too much of this starter oil, then your peanut butter will eventually separate.

Think of peanut butter as a type of sponge that temporarily stores oil before releasing it. Really think about it — what happens when you over-saturate a sponge?

So, when you add extra oil when making peanut butter, the already-saturated peanut butter mixture will quickly expel most of the excess oil, which will result in a larger pool of liquid on top.

We recommend following a foolproof recipe that outlines accurate measurements. Here’s a great video from The One Pot Chef on YouTube that can help you make homemade peanut butter the right way:

Separated peanut butter isn’t an indication of spoilage, but even though it may not be harmful or indicate spoilage, it’s probably best to double-check the quality and expiration date of your peanut butter before consuming it.

Commercial unopened jars of peanut butter with preservatives can last up to 12-24 months over the counter, while an opened jar can remain edible for up to 2-3 months in the fridge.

Please keep in mind that while peanut butter doesn’t spoil as fast, the best way to store is to keep it in the fridge at 40°F. This will minimize bacterial growth and will also maintain the freshness and quality of the peanut butter!

Homemade and natural varieties of peanut butter, however, will have a considerably less shelf life.

For example, an airtight bottle of homemade peanut butter may only last 1-2 months in the fridge while an opened bottle will have to be consumed within 4 weeks for the best results.

Now that we’ve covered spoiled versus separated peanut butter, here are some important signs of spoilage to look out for!

Peanut butter will always have a uniform color so it can be easy to detect any changes. The oil should have a transparent or light golden color, which can vary depending on how deeply the peanuts have been roasted.

Shades of white, gray, and green are a clear indication of spoilage. Avoid mixing the peanut butter — just discard the entire jar, and don’t forget to disinfect the jar if you’re reusing it!

Fresh peanut butter has a very pleasant peanut-like aroma. Even the oil that forms on top will have a distinct peanut-like scent to it!

If you notice any sour or offputting odor then this would definitively mean that the entire batch has gone bad.

Separated peanut butter will always have the same flavor when you mix the oil back in! This test is an excellent way of determining not just spoilage, but also the freshness of the peanut butter.

If you detect any bitter notes or a dip in the natural peanut flavors, however, then it might be time to discard the jar!

Peanut butter commonly separates when made without emulsifiers or stabilizing additives. Now that you know why it becomes “watery” and how to fix your peanut butter, here are some related questions.

Can you discard the layer of oil from the peanut butter?

You could remove the oil that forms over homemade or naturally made peanut butter, but you will be taking away from the overall texture —and even flavor.

The oil is what gives peanut butter its signature smooth texture and shiny appearance. Removing it would just make it crumbly and dry, especially when you store it in the fridge.

Can you add olive oil to peanut butter?

When making peanut butter at home, vegetable oil is preferred because of its neutral flavor — it doesn’t impart any lingering flavor to the mixture, but can add a bit of richness to it.

On the other hand, olive oil is a flavorful and relatively stronger-tasting oil that can affect the overall flavor of peanut butter.

Is Peanut Butter A Condiment?

Can You Freeze Peanut Butter? – The Complete Guide

Havarti Vs Gouda — What’s The Difference?