Home This vs That Cashew Butter Vs Peanut Butter – What’s The Difference?
This vs That 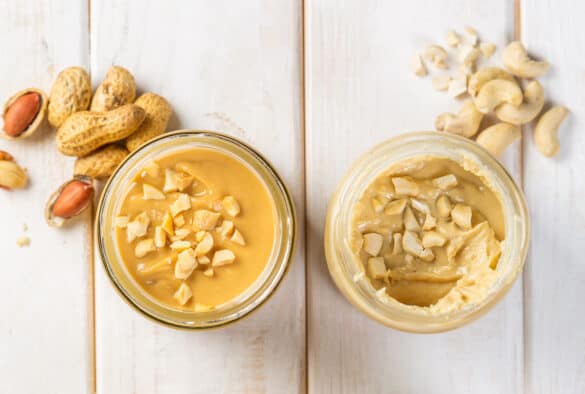 Peanut butter is a household favorite and has been for ages. However, there is a new contender on the block – cashew butter. Cashew butter is fast becoming popular with vegans and vegetarians, and many consider it to be the healthier and more nutritious counterpart of peanut butter.

Cashew butter and peanut butter are often the two compared, whether it be for nutritional value or taste.

Getting to know the differences between cashew butter and peanut butter can help you choose the one which fits into your diet best, but it will also largely depend on which one you prefer the taste of!

Cashew Butter Vs Peanut Butter – What You Need To Know

Continue reading to learn how peanut butter and cashew butter differ in terms of nutrition, how they are made, and what they taste like.

What Is Peanut Butter?

Peanut butter might be one of the most popular spreads around, and it is loved by both kids and adults for its creamy texture and delicious taste, but to many, it is more than just a tasty spread.

Peanut butter contains many great nutritional benefits, and while it is a tasty spread, it is one that is great to have in your diet, and which you don’t have to feel guilty about eating.

Peanut butter is popular for both its taste and its health benefits. It does have good nutritional benefits, and even one slice of toast slathered with peanut butter is a good enough boost for your day.

Peanut butter is also popular among those who follow a plant-based diet, as it contains healthy unsaturated fats, which is needed in a well-balanced vegetarian or vegan diet.

Other than the unsaturated fats, peanut butter also contains protein, potassium, and minerals.

There is also a good amount of iron and vitamin B6 in peanut butter.

Together, the nutritional content makes peanut butter a great choice for those who are health-conscious, and those who want a wholesome, yet delicious, spread.

It is worth noting that as there is such a wide variety of peanut butter brands on the market, you do need to be wary of which one you consume.

There are some which contain artificial additives, sweeteners, and emulsifiers. These end up taking away from the natural health benefits that peanut butter offers up.

What Can Peanut Butter Be Used For?

For most of us, when we think of peanut butter we think of serving it on a slice of toast or a sandwich.

For those who consume quite a bit of peanut butter, especially those who use it in a plant-based diet, just having it on bread can become a bit boring.

There are numerous ways to use peanut butter in the kitchen. Peanut butter can be used to make cookies, biscuits, frosting, and sauces.

You can choose between unsweetened, smooth, or crunchy peanut butter to suit what you use it for in the kitchen.

What Is Cashew Butter?

Cashew butter, while becoming popular with those who follow a plant-based diet, is not as well-known as peanut butter, and does not hold a place as a must-have pantry item in most homes, as its counterpart does.

However, this does not mean that it is in any way inferior to peanut butter, and cashew butter actually outshines peanut butter with certain nutritional benefits.

Much like peanut butter, cashew butter contains a high dose of healthy fats and has a higher concentration of monounsaturated fat in comparison to peanut butter.

Cashew butter and peanut butter have fairly similar calorie and overall fat content, so there is not much to compare between those two categories.

You should be aware of the cashew butter you are purchasing, as the cashews can be raw or roasted. While both are considered healthy, it is better to choose raw cashew butter, as it contains more of its nutritional properties after processing.

However, either is fine and if you prefer the roasted flavor, you will still benefit from the great nutritional properties!

What Can Cashew Butter Be Used For?

Cashew butter is creamy and rich, and while it can also be used to spread on sandwiches and toasts, it can be used in a range of meals in the kitchen.

Cashew butter can be used to prepare dips, sauces, soups, and other recipes. It adds a delightful buttery consistency to meals, along with a rich and creamy taste.

As most cashew butter is not sweetened, it works well in different savory dishes and recipes.

A similarity between cashew butter and peanut butter is that you can make both of them at home in around 20 minutes if you do not want to purchase them from the store.

You can actually use the same recipe and ingredients for both, other than the obvious change of cashew nuts or peanuts.

Other than peanuts or cashews, you will need a baking pan and a trusty nut grinder like this one.

The process of making cashew butter and peanut butter at home is nearly identical and shows that there is not much difference between the two, other than the nutritional benefits either nut brings to the table.

Once again, you just need to be wary of the brand of nut butter you are buying, to ensure there aren’t too many artificial additives.

Unfortunately, you will not be enjoying peanut butter if you have an allergy to it.

Always consult with your physician before doing swapping cashew butter out for peanut butter if you have allergies.

Where Does Almond Butter Come In?

It is obviously made from almonds and contains more total fat than peanut butter, however, this is made of more monounsaturated fats and half the amount of saturated fats.

It also contains more minerals than peanut butter, with the exception of selenium content.

What are the benefits of nut butter in a diet?

Phytosterols, unlike cholesterol, may help to reduce cholesterol levels in humans. Nut butter is also a good source of minerals, protein, and healthy fats.

They are easy to include in your diet and the nutritional benefits are undeniable.

Should I spend the extra money on almond or cashew butter?

Almond or cashew butter can cost up to nearly twice as much as peanut butter, sometimes even more.

If you really wanted to spend this extra money, then, by all means, it is worth it to you, however, there is not much added nutritional value that you would be getting for the huge price difference.

You just need to make sure the peanut butter you choose does not have too many unwanted additives.

When stored, it is common for the oils and the solids in cashew butter to separate. However, peanut butter tends to remain unseparated and in the same state.

Cashew butter is prepared using a variety of oils, including safflower oil, whereas hydrogenated vegetable oils are used to prepare peanut butter.

This then means that the two nuts give the nut butter different nutritional benefits and unique properties.

However, at the end of the day, there isn’t a huge difference between the two types of nut butter, and both are great inclusions into a diet, you just have to ensure that the nut butter you choose does not contain any unwanted additives or sweeteners, to ensure that it is as healthy as can be.

Up Next: Can You Freeze Peanut Butter?

Can You Freeze Yogurt Starter?

Hojicha Vs Matcha — What’s The Difference?

Maltesers Vs Whoppers — What’s The Difference?

Pinsa Vs Pizza — What’s The Difference?