Home Cooking Tips What Does Falafel Taste Like? – The Ultimate Guide
Cooking TipsFoodsguy 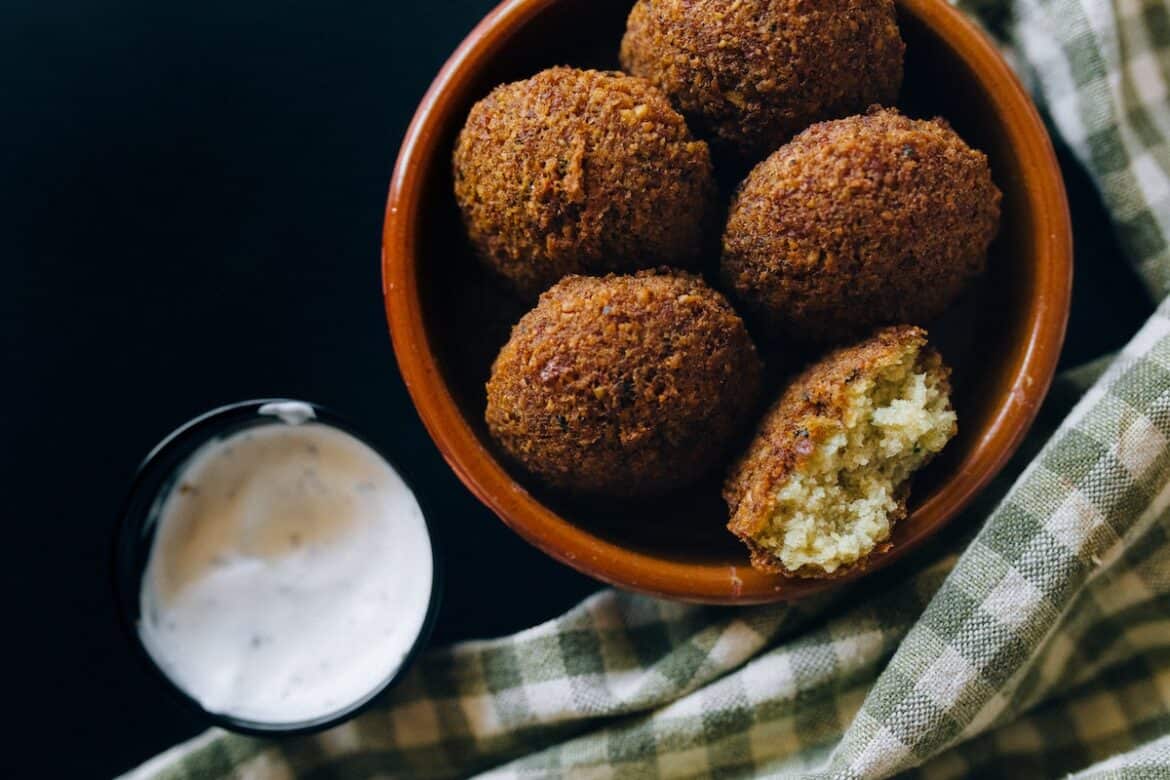 Falafel is a food that can be sold by street vendors or served by upscale Mediterranean restaurants.

In recent years, falafel has gained popularity for being a vegan delicacy that is both classic and versatile, taking vegan eating to a whole new level.

With its unique texture and flavor, falafel has taken the world by storm as a meat substitute in items like sandwiches, wraps, and even burgers.

So, what does falafel taste like? Though the ingredients in it may vary, traditional falafel has a slightly crunchy texture and a rich, savory, grainy, and herbaceous flavor, consisting of many herbs and spices including coriander, cumin, parsley, and mint.

In this article, you can expect to learn exactly what ingredients in falafel give it its signature taste, what it smells like, its texture, where you can find it, and the many different ways you can eat it!

Falafel is a small vegan deep fried ball that originates in the Middle East.

It is usually shaped like a ball or a patty and is primarily made from chickpeas, fava beans, or a mixture of both.

It tends to be bigger than a meatball, but smaller than a burger patty—its size is somewhere in the middle of those two food items.

Falafel is crispy on the outside from the frying and soft and dense on the inside (many have even compared it to a savory donut!)

It can be made in a variety of ways and can be a very bright green color or a little browner and duller depending on the ingredients incorporated into the falafel mix.

Falafel can be fried in oil or baked in an oven. With new kitchen technologies, they can even be made in an air fryer or toaster oven.

It is traditionally served by itself with a dipping sauce, on a plate with rice and vegetables, or in a wrap or sandwich.

What Ingredients Are In Falafel?

Like I previously mentioned, falafel can be made with a wide array of different ingredients.

The base for falafel can be made with chickpeas, fava beans, or a mixture of both. It also usually includes onion and/or garlic.

Where the ingredients vary the most is in the herbs and spices included. Traditionally, it includes the spices cumin, coriander, and pepper.

The herbs falafel usually includes are parsley, mint, and cilantro. Lemon juice may also be included in the recipe or served on the side for added flavor.

Because falafel is fried or baked, the last main ingredient is oil. To successfully fry falafel, an oil with a high smoke point is necessary. Avocado, canola, vegetable, or sunflower oil are good options.

Oils with strong flavor and low smoke point, like olive oil, do not make for a good frying option as the flavor may take over and the falafel may not fry properly.

What Is The Texture Of Falafel?

Falafel has a very distinct texture, being slightly crunchy on the outside yet soft and dense in the middle.

The outside of falafel will be crispiest if it is fried in oil. Falafel that is baked can still have the signature crunchiness but will not produce the same crunch as one that has been fried.

The texture of falafel can be slightly compared to similar fried delicacies from other cultures, like hushpuppies or arancini.

Because the ingredients in falafel can vary, the smell of the vegan treat can as well.

Chickpeas and fava beans do not tend to affect the smell of falafel as they are both very mild tasting and smelling beans, though they do contribute slightly.

A majority of the falafel’s smell comes from the herbs, spices, and aromatics included in the mix. Aromatics usually include onion, garlic, and sometimes lemon.

With traditional falafel, you can expect it to always smell very herby due to the parsley, mint, coriander, and/or cilantro that is added.

In addition, pepper is almost always added so you can expect to smell the sharp aroma of black pepper in your falafel.

Similar to smell, the taste of falafel can vary depending on the ingredients included in the mix.

Most often falafel has a slightly crunchy texture and an herby, savory and rich flavor to it.

The more herbs included, the herbier and fresher the falafel will taste. It will also result in a brighter and greener falafel.

With fewer herbs, you can expect the falafel to taste a little more rich and savory from the chickpeas or fava beans.

The flavor in falafel may vary depending on how it is made. If it is fried in oil, you may get hints of the oil it has been fried in. Neutral oil helps ensure you can taste the herbs, spices, and aromatics.

However, traditional falafel will taste crunchy yet dense, savory and herby.

How To Make Falafel

Making falafel takes a bit of time, but it is a relatively easy process.

How Do You Eat Falafel?

Because it is a versatile food, falafel can be served in many different ways.

Traditionally, falafel can be served by itself with a dipping sauce. The sauce is usually a traditional hummus or tahini-based (a sauce made from ground toasted sesame seeds). Hot sauce is another popular option.

It can be eaten as a main dish with traditional Middle Eastern sides like rice, tomatoes, cucumbers, and pickled onions. When served as a main dish, falafel still usually includes a sauce for dipping.

Falafel is also commonly eaten in pita bread as a wrap. The wrap will usually include vegetables like lettuce, tomato, onion, and cucumber. It almost always has a sauce as well, like hummus, tahini, or tzatziki.

However, because of its popularity, many restaurants now include falafel as an option for their burgers and sandwiches as a vegan and vegetarian option.

As it is made with beans, it can act as a protein in these food items that are traditionally made with meat.

No matter what way falafel is eaten, a sauce is necessary. Because it is a bit dense, falafel is great for soaking up whichever sauce you choose whether it is tahini, hot sauce, or hummus!

Where Can I Get Falafel?

Because it has gained popularity in the last few decades, falafel is fairly accessible almost anywhere in the world.

Falafel was originally sold by street vendors, and it can still be found being sold by them today. Many major cities around the world still have falafel street vendors!

You can also get falafel at Mediterranean, Middle Eastern, and Greek restaurants in your city.

Smaller restaurants tend to remain more authentic in its preparation, where nicer upscale restaurants have the tendency to add unique ingredients falling short of tradition in their falafel recipes.

Lastly, you can buy pre-made falafel frozen or fresh from some grocery stores, and falafel mix from almost any big grocery store. However, these types tend to not be as fresh, tasty, or traditional as the other options.

Now that we’ve gone over the inner-workings of falafel, let’s take a look at a few related questions on the topic!

Can falafel be eaten cold?

While traditional falafel is eaten warm, it can still be eaten cold or at room temperature.

The ingredients in falafel, chickpeas, fava beans and herbs, are all edible without any cooking; therefore, it is fine to eat cold.

Can I freeze falafel?

Both cooked and uncooked falafel can be stored in the freezer for later consumption.

Uncooked falafel can be stored in an airtight container for 1 month before cooking.

Cooked falafel can be stored in the freezer for 3-6 months.

Up Next: 7 Best Sugar-Free Gummy Bears