The Difference Between Black And White Pepper 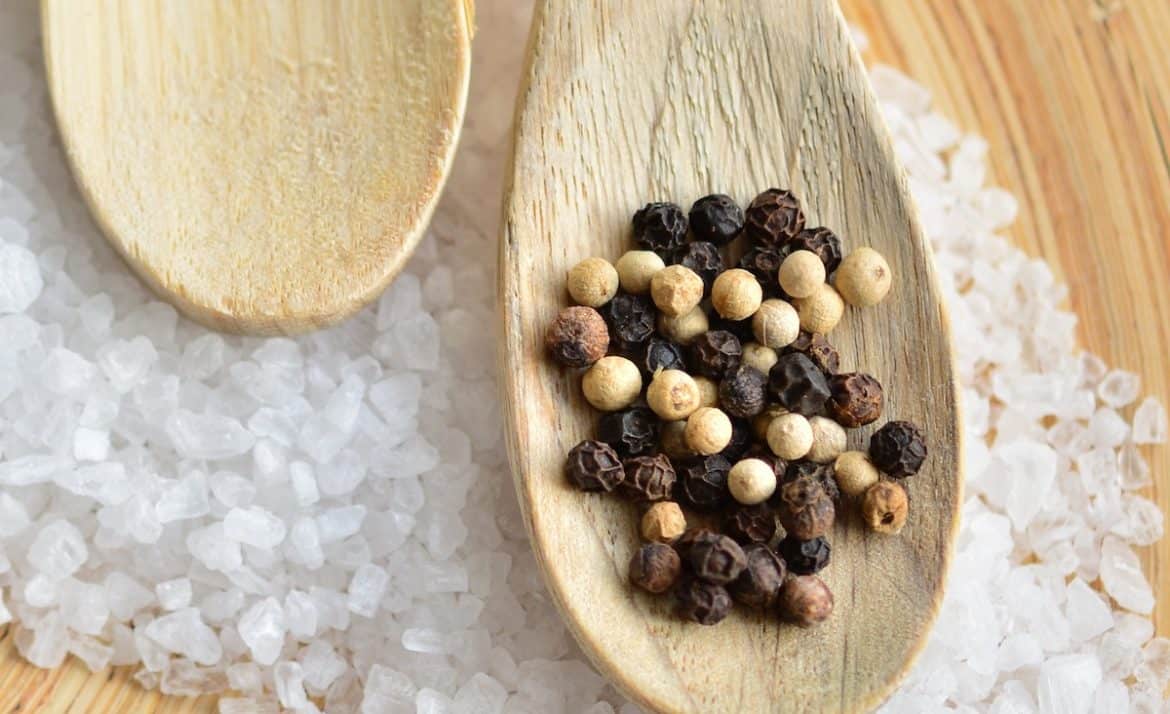 When was the last time you sat down to a home-cooked meal and didn’t reach for the salt and pepper shakers before digging into your dinner? Chances are, the pepper on your table is black.

Did you even know that white pepper exists? They come from the same plant!

Keep reading to learn everything you need to know about black and white pepper.

Where Pepper Comes From

What we think of as pepper originally comes from peppercorns, which are the berries of a pepper plant called piper nigrum. This pepper plant is very different from the chili peppers we’re used to growing in our gardens or picking up at the local supermarket.

Peppercorns grow on vines native to India and Southeast Asia. Like many fruits and vegetables, they begin green but as they ripen, they turn a rich red color.

Depending on when they’re harvested and how they’re dried, the final product may be green, black or white.

How Pepper Is Made

To make the ground pepper that we’re used to buying, the berries are first harvested and dried. If the berry is picked when it’s still green, it is more likely to be pickled, as they don’t dry very well.

Most red or pink peppercorns aren’t actually peppercorns at all, but the berries of a different kind of pepper tree, native to Brazil.

Black pepper is made from drying berries that are almost mature. The process of drying them usually involves boiling them quickly first and then spreading them out in the sunshine to dry.

Some commercial facilities will dry them in ovens instead, though the sun in India and Southeast Asia is certainly hot enough to do the job quickly. As they dry, their skin gets darker, turning almost completely black.

White pepper is also made from almost-ripe berries, but before they’re dried, the skin is removed, which is why they lose all their color.

The skin of ripe berries is quite fragile, so simply immersing them under a constant flow of water will eventually pull it off completely. Once they’re baby-bottom smooth, they’ll be dried.

For a simple spice that is often taken for granted, it’s surprisingly healthy for you. It’s full of antioxidants and many different vitamins, minerals and other micronutrients.

Pepper has been used in ancient, traditional healing practices to improve a variety of conditions, including lowering inflammation, improving digestion and decreasing blood pressure.

The anti-inflammatory properties alone help to reduce your risk or experience of nearly every chronic disease known, from asthma to cancer.

If you’ve heard about the many benefits of turmeric, you may also know that for your body to properly absorb the crucial component, curcumin, it needs some help.

Peperine and capsaicin are 2 very effective compounds to help boost the absorption rate, and pepper happens to be nearly 10% peperine. It also seems to help absorb other nutrients as well, such as calcium and selenium, among others.

I’m sure you’re used to adding pepper to the majority of your dinners and possibly even lunches. It adds a nice hint of heat and earthy flavor to nearly any savory meal and we’re so used to it that something just seems to be missing without it.

There are a few less common uses for pepper that may surprise you.

My personal favorite is to add pepper to a bowl of strawberries. I saw this in a recipe years ago and I’ve been a convert ever since. The pepper serves to balance any tartness that may be in your berry, enhancing its natural sweetness. If you add some balsamic vinegar to the mix you really have a winner.

This technique can be used on any fruit that has a sweet/sour combination when you want to focus on the sweet side of the equation.

There are even non-food related uses for pepper. For example, ants and other pests will do their best to avoid it, so if it’s “that time of year,” just sprinkle some pepper in their path and they’ll be more likely to stay outdoors and off your counters.

If you’ve ever accidentally knocked over a container of finely ground pepper and then taken a nice, deep inhale, you know one of the side effects of pepper is that it causes sneezing.

Some people are much more sensitive to pepper and will sneeze even if it’s been added to a dish and then served to them, whereas others need to get a face full of the spice to really be bothered.

Why does pepper make you sneeze? Its caused by an alkaloid called piperine which is irritating to the tiny hairs in your nose if its inhaled. It’s not particularly dangerous, though it can be annoying.

The same compound can increase the risk of bleeding in people with bleeding disorders, but only when eaten in excess. On the whole, pepper is considered safe to consume for everyone, according to personal taste and heat preferences.

The health and nutritional benefits of white pepper are more or less identical to those of black pepper since they’re the same plant just processed differently. There are some benefits to choosing white pepper for certain recipes, however.

White pepper is generally thought to be slightly spicier than black pepper, though less complex in its flavor profile. In other words, all you get is the heat with very little to taste.

There are certain compounds in the skin of the peppercorns that add depth of flavor to black pepper that is lost in white, including something just a little bit fruity or floral.

White pepper is best used in recipes that could use a little heat, but you don’t want to alter the flavor. It’s also great when you don’t want little black specks of pepper to ruin your beautiful presentation, particularly for cream sauces or light garlic and oil sautees, for example.

It also works perfectly for salt and pepper blends in a shaker or grinder, without the black and white contrast.

If you’re simply looking to spice up a dish, you can substitute black pepper for white in just about any recipe, though you may need to add a little extra to get the same level of heat.

Using black pepper as a substitute can become a bit tricky when you’re making light-colored or creamy sauces, as the pepper will be visually more noticeable.

Depending on the dish, you may also want to try adding a bit of ground cayenne pepper instead. The powder will blend into a sauce less conspicuously, but you will need a great deal less to achieve the same amount of heat. Try substituting ½ tsp of white pepper for 1/8 tsp of cayenne pepper.

One thing additional thing to be aware of when it comes to white pepper is that it will go stale more quickly than black pepper. If you’re anything like me, you’re probably amazed to hear pepper can even go stale – it was not a thought that had ever crossed my mind before researching this article.

But it’s true, black pepper will last 2 – 3 years ground and up to 6 years as a whole peppercorn.

Ground white pepper, however, should be used within 1 year and, if stored well in an airtight container out of direct light, the whole peppercorns will last 2 – 3 years.

While pepper is unlikely to go bad, it will lose its potency and many cooks will replace their supply within 6 months.

Why is white pepper so expensive?

White pepper tends to be more expensive than black pepper simply because it takes more steps to prepare it for consumption. As with almost anything in life, the harder it is to create, the higher a price tag will be attached to it.

Why is black pepper so common?

At some point, salt and pepper became irrevocably connected, to the point where it almost feels unnatural to add one without the other now. While salt makes sense because it enhances our ability to pick unique flavors out of our food, pepper adds a specific heat and spice of its own.

Professional chefs will use black pepper with much more discretion than a home cook, but the simple answer is probably nothing more exciting than habit and tradition.

There is absolutely nothing stopping you from cutting out the pepper, swapping it for another variety of pepper, or making an entirely different spice your go-to staple of choice!

Where does cayenne pepper come from?

Cayenne pepper is quite a bit different from white or black pepper and it isn’t made from peppercorns, but rather from a pepper plant, similar to bell peppers or jalapeno peppers, though much hotter.

You can find them fresh, as small red hot chili peppers, but it’s most commonly used in either its powdered form or as flakes. It adds heat to almost any dish though, when used moderately, isn’t so powerful that it’ll leave you sweating and swearing off peppers for life.

Video On Black and White Pepper

Up Next: The Best Substitutes For Lemon Pepper

The Difference Between Cauliflower And Broccoli