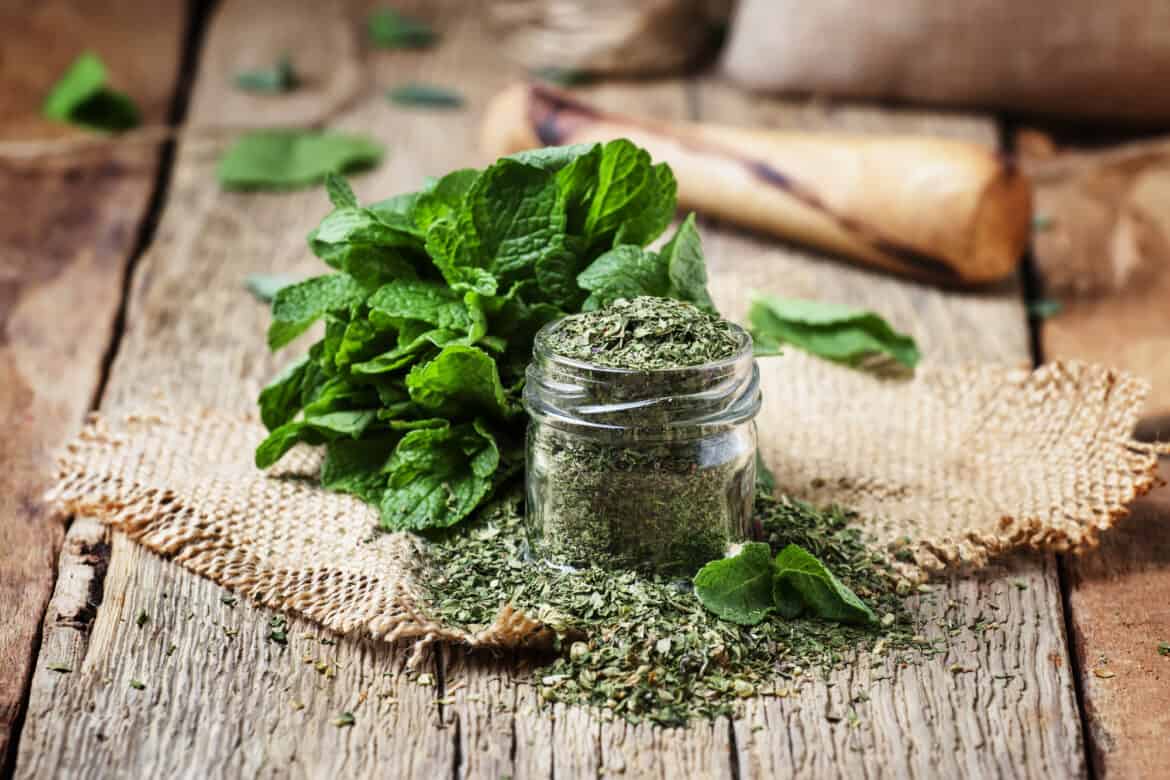 Dried mint is a herb that you should definitely keep in your kitchen if you don’t already have it in your pantry! It is such a versatile herb to use and can add some great flavor to dishes, sauces, and dressings.

Keeping fresh mint in the fridge at all times usually isn’t very practical, and dried mint can still offer that minty flavor to salads and dressings. However, you might find yourself without either and need some for a recipe!

Keep reading to find out the best substitute for dried mint depending on what you need it for!

The Best Substitutes For Dried Mint

Mint has such a unique taste, and dried mint carries this flavor well when used in both sweet and savory dishes.

If you have run out of dried mint at home, there are many different substitutes you can use in its place.

You might not get the same minty flavor that you would have gotten from dried mint, but many of the substitutes will come close and still help you make something delicious!

Take a read through all of the recommendations below (keeping in mind what it is you were using the dried mint for in the first place) to find the best substitute for you.

Dried parsley is a good substitute for dried mint because it doesn’t have a very strong flavor, so it won’t add any overwhelming taste to a dish where the mint was supposed to be included.

It is even considered a good option to use in place of mint if you aren’t a fan of the strong flavor and aroma that mint has — this acts as a more subdued alternative.

As it has such a subtle flavor, parsley is a good substitute when cooking, such as in stews or soups, and it will add a good herb flavor to a dish without being too noticeable.

Dried parsley is best suited to be used in savory dishes as it does not go too well in sweeter items, but it can be used in a smoothie if you need some greens.

If you do not have any dried mint, but still want that minty flavor, then peppermint extract is the next best option!

It is such a convenient way to add the mint flavor to a dish without having to do much preparation at all.

The one downside is that peppermint extract tends to have a much stronger taste and aroma than dried mint, so you need to be careful when using it in its place.

It can be added to sauces and dressings to give the mint flavor, but start off with just a few drops, and taste and adjust from there. It is a better option for sweeter dishes, marinades, and dressing where the minty flavor is needed.

Oregano is part of the mint family, so it makes sense that it would be a good substitute to use in place of dried mint!

You need to be careful when using oregano in place of mint as it has quite a strong flavor — especially if you do not want to bring in any rich herby flavors that might overpower a dish.

Start with half the quantity needed of mint when using dried oregano, and taste and adjust as you go.

Oregano is best used in place of mint in savory dishes, marinades, and sauces, and it can be combined with other spices to make a delicious seasoning too.

Like oregano, rosemary is part of the mint family, so it can be used successfully in place of mint in certain recipes and meals.

Rosemary and mint do have fairly different tastes and textures, but rosemary can be used in a wide range of ways, and when dried, it can easily be added to a dish for extra flavor.

Use dried rosemary in place of dried mint in sauces, dressings, pasta, stews, soups, and casseroles, and enjoy the fresh herby flavor it brings!

One thing to remember when cooking with dried rosemary is that it needs to be added to a recipe early on to be able to release its flavor properly, as it is quite a hardy herb.

You probably won’t want to empty the contents of a herbal mint tea bag into your salad — while you probably could, you can instead brew some of the tea and use this to flavor sauces and dressings.

If you have some herbal mint tea in the pantry, make sure to have a look at the ingredients. Some mint teas contain other ingredients, ranging from black tea to rose hips and lemon balm — we like this one as it contains only wild mint.

If your tea just contains dried mint, then you could place the contents of the tea bag into a food processor and pulse it a few times to chop the dried mint down small enough to use in place of dried mint leaves.

Dried marjoram has a slightly similar flavor to dried mint, and the two can be used interchangeably in a few cases.

Dried marjoram has a slightly more citrusy flavor to it with hints of pine. It has a fresh flavor, even in its dried form.

Use around the same quantity of dried marjoram as you would have used dried mint in sauces, stews, and dressings.

An obvious substitute for dried mint would be fresh mint — however, even though fresh mint will give a dish a fresh minty flavor, it is not always the best option to use for all recipes.

It is best to use fresh mint in place of dried mint for smoothies and to top some salads or dressings.

It is not as ideal for cooking stews and soups and similar, as it is quite a thin herb and it will not hold up well in the cooking process.

Tarragon is a super tasty herb that has quite a punch of flavor, and a little bit of dried tarragon can be used in place of dried mint.

It is fresh and herby and is ideal to use in savory dishes and fresh sauces.

Dried tarragon won’t give a minty flavor to food, but it will bring a delicious aroma and taste that is different from most other herbs.

Use dried tarragon in place of dried mint when marinating meat.

If you were after that fresh flavor, then lemon zest might be a good replacement for dried mint.

This is a great option if you were looking for a dried mint replacement for dressings and marinades — while it might not be minty, it will definitely be tasty!

You simply have to grate the skin of a lemon to get some lemon zest, and then sprinkle this in with the rest of the ingredients you are using. Try using a pinch at first, taste the mix, and add more from there if needed.

You either love cilantro or you hate it, but if you are pro cilantro, then it could be a great substitute to consider using when you are out of dried mint.

Dried cilantro does not have as strong or fresh a flavor as the herb itself, but it will still add quite a bit of taste to a dish, so you do need to use it sparingly.

Use half the amount of dried cilantro than you would mint, then taste it and add more from there if needed. You can even use it to make tea!

Lemon balm is special in that it has a similar flavor and appearance to mint.

It can substitute dried mint in sweet desserts perfectly, but it can also bring a fresh citrus flavor to savory meals too.

If you were making a marinade or dressing with dried mint but don’t have any, then it is definitely worth trying out some chopped-up lemon balm in its place. It is almost the best of both worlds — minty and citrusy!

Dried mint is quite sweet, and it has an earthy flavor to it too. It adds great depth to a dish and can be woodsier than fresh mint. It is considered to give quite a different flavor to dishes than what fresh mint does.

Is mint tea just mint on its own?

True mint tea is made using just mint and some boiling water — no extra ingredients. There are different types of mint you can use to make mint tea, including peppermint, spearmint, or even chocolate mint.

Can I use dried mint for tea?

Dried mint is not ideal to use to make tea, as it can become bitter and bland if it is brewed for too long or if it has gone stale — this is why many tea brands use additional ingredients such as black tea or rose hips, hibiscus, and lemon peel.

It is best to use fresh mint or proper mint tea if you desire a proper cup.

The 7 Best Substitutes For Italian Seasoning

How To Freeze Mint – The Ultimate Guide