Home Cooking Tips What Does Cilantro Smell Like?
Cooking TipsFoodsguy 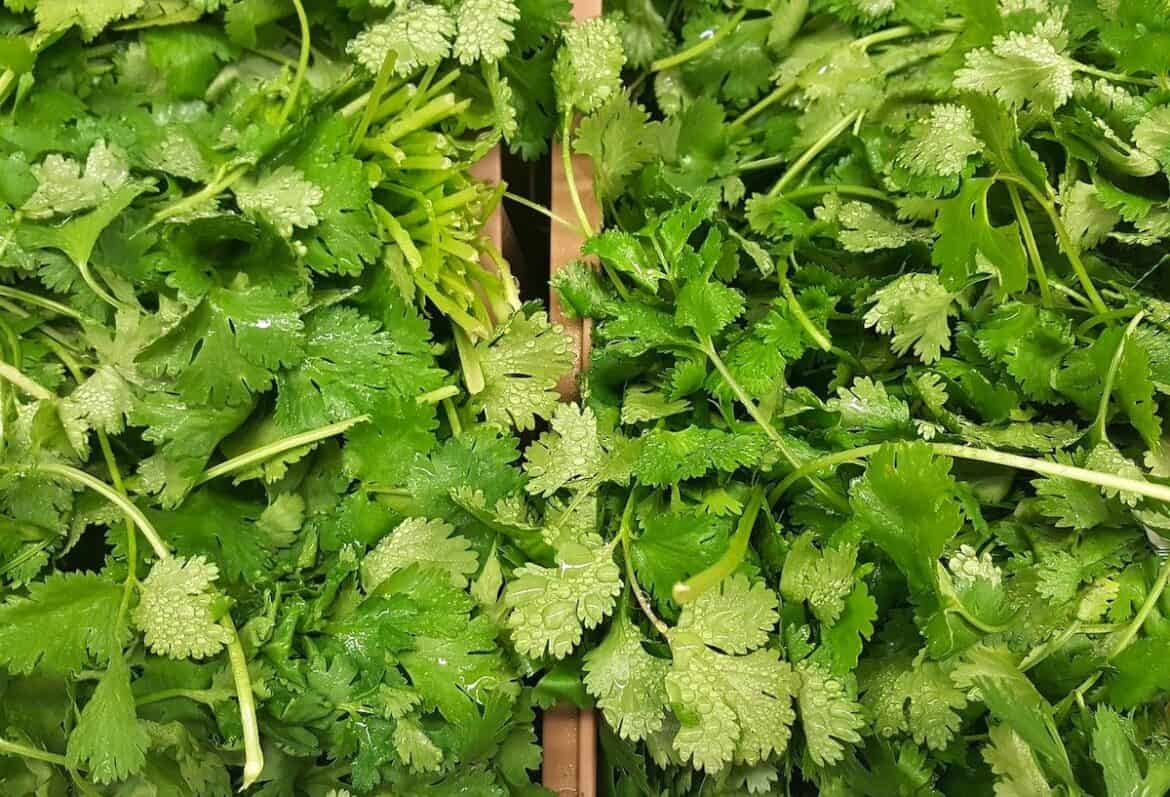 Including fresh herbs into your cooking will transform and elevate your recipes. They add a layer of flavor to your dish that cannot be achieved by any other type of food.

In all types of cuisines from around the world, there are many different herbs that are used like parsley, thyme, and oregano. There is one herb that is one of the most popular around the world, yet is also the most controversial: cilantro.

Cilantro is a polarizing herb as some people love it, while others despise it. Dependent on just one gene, the taste of cilantro varies widely from person to person.

In this article you will learn more about what cilantro is, how it smells and why it tastes like soap to some people, different ways to use it–plus, how to store it and tell if it has gone bad.

Cilantro is a leafy herb that grows from the coriander seed and plant. It is part of the Apiaceae family, also known as the parsley family.

Cilantro is a bright and vibrant green color with long and tender stems that grow bunches of flowery leaves.

Often, cilantro is referred to as Mexican or Chinese parsley and the leaves of the plant may explain why–they closely resemble parsley.

Also, if you are in a country like the United Kingdom, you may be surprised when you cannot find cilantro anywhere but instead you see fresh coriander leaves listed.

Though coriander seed tastes quite different than cilantro, it is often referred to as fresh coriander leaves in other parts of the world as it grows from coriander seeds.

Cilantro can be used fresh and raw or cooked in a dish.

Answering the question “what does cilantro taste like?” is not as easy as one may assume. That is because cilantro is one of the most polarizing foods that exist.

Some people love the taste of cilantro, while others can’t stand it. However, this is not just a matter of preference or people being “picky” eaters.

Believe it or not, this wide difference in liking cilantro stems from genetics.

Of course, there are some people who will just not like the taste, but for those who despise cilantro, it is because it tastes just like soap as a result of a specific gene.

Cilantro contains something called aldehydes, which are what create that soapy flavor. Aldehydes are also what some people are extremely sensitive to.

Those who taste soap when eating cilantro have a specific gene that is particularly sensitive to the aldehydes in cilantro that comes from the olfactory center in one’s DNA.

Studies have shown that this affects more women than men, and more European people than any other ethnicity.

It is said people in India, Mexico, and Asia are less likely to be sensitive and have the specific gene. This could be why these countries and continents heavily use cilantro in their cuisines.

However, for those who do not have this specific gene and can enjoy cilantro, it tastes delightful. It is fresh, earthy, and citrusy with hints of lemon and lime.

Fresh cilantro is more flavorful, while cooked cilantro tends to lose a bit of its flavor.

Like taste, the way cilantro smells vary from person to person.

Those with the gene that are sensitive to aldehydes will not find cilantro to smell very pleasant. It will smell soap like but may also smell extremely bitter and sometimes even rancid.

Did you know that smell could actually be the reason cilantro tastes bad to those with the gene?

It is because smell is responsible for about 80 percent of what we taste. So, those with the specific gene cannot eat or smell cilantro without turning their noses up.

However, for those who can enjoy cilantro, it smells quite tasty. It is extremely fresh, earthy, with hints of citrus like lemons and limes and may be a bit peppery at times.

Cilantro is extremely distinct in smell and cannot really be compared to anything else.

In What Part of the World is Cilantro Used?

Cilantro is used all across the globe in many different types of cuisines.

It is mainly used in Indian, Mexican, Thai, Vietnamese, Central American, and the Caribbean.

Though these are where it is traditionally found, cilantro has become an extremely popular herb and is grown all over the world, making it an accessible ingredient to most people.

Different Ways To Use Cilantro

Because there are so many different parts of the world that include cilantro in their dish, it is an herb that can be used in countless ways.

Mexican, Indian and Thai are the cuisines that use it the most.

Let’s break it down that way:

It is almost impossible to have any type of Mexican dish without cilantro. It is in marinades, salsas, dips, sides, and sometimes even drinks!

Cilantro is used raw in traditional salsas and guacamole’s (which is an avocado based dip traditionally served with chips).

It is used in marinated taco meat like carne asada, pollo asada or al pastor.

You will find cilantro is enchilada sauce of all varieties. It will also be in flautas, taquitos or nachos, and beans and rice.

Cilantro is also often used on top of Mexican plates as garnish. As you can see, cilantro is just about everywhere in Mexican cuisine.

Like Mexican, Indian cuisine uses cilantro in many of its different dishes.

It can be found in chutneys, which are chunky sauces that resemble relish.

Cilantro is used to flavor Garam Masala and all types of curry dishes, which are staples in Indian cuisine.

You will also find cilantro in traditional Indian stews and soups like lemon coriander soup, another Indian staple.

Cilantro often acts as a garnish in Indian cuisine as well. Cilantro helps give Indian food its signature flavor.

Thai cuisine also utilizes cilantro to elevate the flavors of their dishes.

It is used in salads, like the Thai staple the papaya salad.

You can find it in multiple soups like Tom Khai Gai, Tom Yum or Spicy Curry Soup.

It is often included in their traditional noodle dishes like pad thai, or pad see ew.

Cilantro is also used often as a garnish to multiple dishes, like it is in Mexican and Indian cuisine.

Cilantro is a staple to Caribbean cuisines making an appearance in sauces, salsas, meats and more.

You can find it in their black beans or their signature dish, Jerk chicken.

In Vietnamese food, cilantro can be found in many of their classic dishes like the Bahn mi sandwich or pho, a traditional noodle soup.

South America uses cilantro in many different parts of the continent. In Peru, it is used in ceviche, a shrimp or fish dish.

In Argentina, cilantro is often used in empanadas in both the filling and as a garnish.

You can also find it in sauces like chimichurri or salsa verde, which both stem from South America.

As you can see, cilantro is an extremely used but also versatile herb that has the potential to elevate many different dishes.

Let’s elaborate on a few more specifics about cilantro.

What Are The Benefits Of Cilantro?

Cilantro is full of antioxidants that are thought to aid in the prevention of degenerative diseases like arthritis, cancer and diabetes.

It also contains iron and magnesium. Plus, it’s known to be a natural diuretic and can help battle nausea.

Cilantro also has a natural ability to help fight off salmonella.

How Do I Tell If Cilantro Has Gone Bad?

Good, healthy and fresh cilantro should be a bright green color with tender yet crisp stems.

The stems should have a very minimal “crunch” to them when cut or ripped.

If your stems are soft, mushy, or slimy that is a sign your cilantro has gone bad.

If cilantro is starting to wilt, it is okay to use it just will not have as much flavor.

However, if it has wilted enough to where mold or spots start growing, throw it out.

Now, if you are someone who enjoys the smell of cilantro, then you can also use your nose to determine whether or not your cilantro is edible.

If it smells rancid or like a stink bug, it is time to throw it away.

Remember, only rely on your smell if you are someone who is not sensitive to cilantro.

How Do I Store Cilantro?

Cilantro should always be stored in your refrigerator. However, there are a few tricks that can help it last a bit longer:

Try keeping the stems in water. When you get home from the store, trim the bottoms of the cilantro almost like you would a bouquet of flowers.

Speaking of fridge location… keep it toward the front. The back of refrigerators tend to be the coolest parts and when cilantro gets cold it starts to wilt.

It will still be edible, but it slowly will lose its flavor.

Whatever you do and however you store it, make sure to take it out of a bag.

The bag you bring it home in from the grocery store tends to create moisture and, again, will make your cilantro wilt much more quickly.

Up Next: How To Reheat Tacos – The Complete Guide