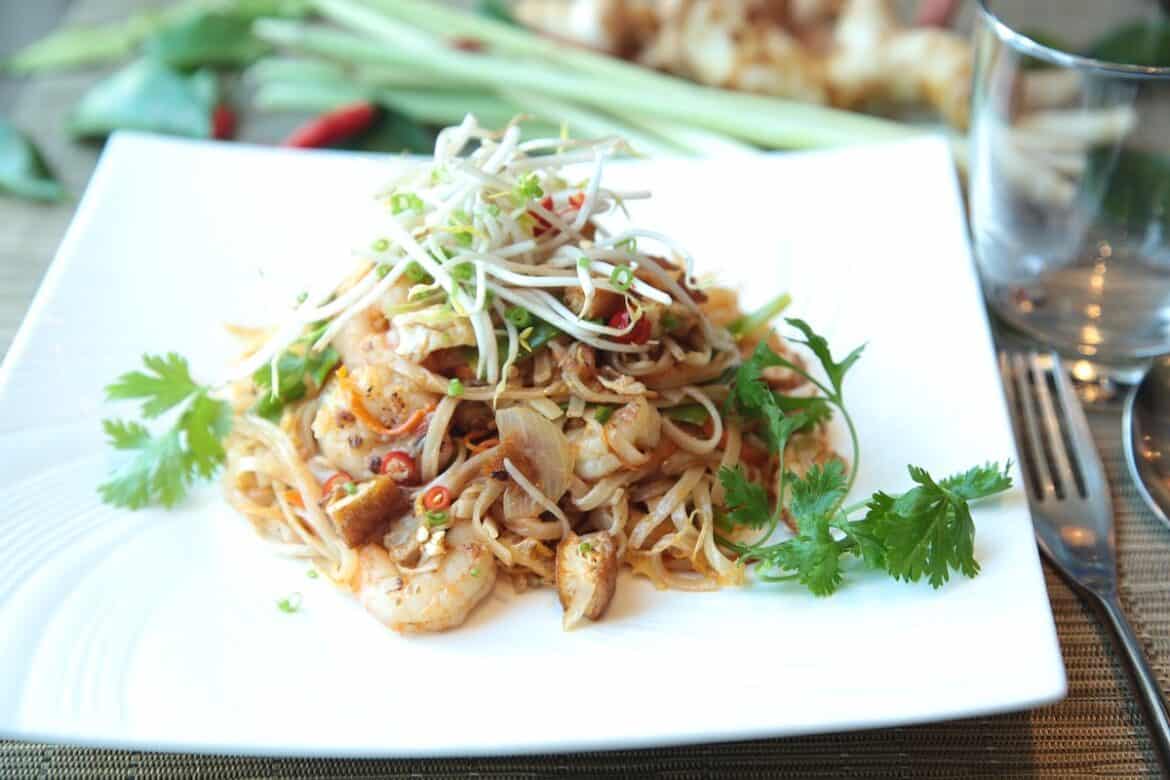 Thai cuisine is an amalgamation of flavors. It is sweet, sour, and definitely very spicy! The herbs and spices used in this cuisine are simply magnificent and bring about a mouth-watering dish.

When we talk about Thai cuisine, it is almost impossible to not talk about pad thai and drunken noodles. After all, they are the two most famous Thai dishes all over the world today.

Yet, Thai cuisine enthusiasts often try to find the differences between these two.

In this guide, we will talk about how pad thai and drunken noodles differ in detail.

Read on to find out!

What Is Pad Thai?

Pad thai is one of the most common street dishes of Thailand.

It is a type of stir-fried dish that consists of thin rice noodles, beef/tofu, peanuts, scrambled egg, chicken, bean sprouts, and other vegetables.

The ingredients may differ depending on the recipe used.

Chefs and cooks may use a wok to sauté all the ingredients together.

Then, they toss these ingredients in the special pad thai sauce which is responsible for the unique sweet and salty taste of the dish.

The pad thai sauce consists of mainly tamarind paste, along with fish sauce and oyster sauce.

What Is Drunken Noodles?

Just like pad thai, drunken noodles is common street food in Thailand and in other places of the world too!

Drunken noodles is a stir-fried dish that consists of wide rice noodles. However, the other ingredients used can differ slightly.

This dish is made up of various sauces such as fish sauce, soy sauce, garlic sauce, and oyster sauce. Some other additional ingredients include meat, seafood or tofu, plus a variety of vegetables.

Drunken noodles also has a very distinctive spicy flavor due to the presence of different spices such as black pepper, chili, and holy basil.

Pad Thai Vs Drunken Noodles: What Is The Difference?

Both pad thai and drunken noodles use one common main ingredient: stir-fried rice noodles. They also contain other ingredients that add the element of sweetness.

Yet, there are some major differences between pad thai and drunken noodles which set them apart. These include:

Though both pad thai and drunken noodles are popular dishes from Thailand, their origins do still differ.

Pad thai was invented by the former prime minister of Thailand, Plaek Phibunsongkhram, for cultural and historical reasons.

Pad thai gained popularity during World World II and spread across the US.

Today, it has become the most popular Thai dish in the US as well as in other nations of the world!

On the other hand, drunken noodles, also known as Pad Kee Mao, rose in popularity due to the Chinese population living in Thailand.

There are various reasons why these noodles may be known as ‘drunken’ noodles.

For instance, some people believe that these noodles are meant to be consumed while drinking alcohol.

Whereas some believe that the Chinese used rice wine in these noodles which isn’t used anymore.

Drunken noodles are quite popular too but of course, not as popular as pad thai which is the national dish of Thailand.

One of the most obvious differences between pad thai and drunken noodles is the ingredients used.

Now, even though both are stir-fried rice noodles, the other spices, sauces, and vegetables used in both dishes are quite different.

Pad Thai has a dominating sweet and nutty taste due to the presence of ingredients such as tamarind sauce, fish sauce, peanuts, and palm sugar.

This blend of ingredients is then added to the rice noodles.

Depending on the recipe, other ingredients such as tofu, chicken, shrimp, and/or vegetables like carrots and cabbage are placed on the stir-fried pad thai.

Shrimp and chicken are the most common protein ingredients.

Conversely, drunken noodles is spicier and more savory compared to the sweet taste of pad thai.

The wide rice noodles come with a savory sauce that consists of ingredients such as soy sauce and fish sauce.

You may also find some stir-fried vegetables on top of the noodles. For protein, drunken noodles contain chicken, tofu, ground pork, and/or beef.

Here, you can pair drunken noodles with almost any protein source whereas pad thai tends to be better with shrimp or chicken.

The flavor profile of both pad thai and drunken noodles may have slight similarities as both are somewhat sweeter than other Thai dishes.

Yet, some other differences include:

The pad thai consist of an Umami flavor which isn’t observed in drunken noodles.

Moreover, it also has a bit of crunchiness and nutty flavor to it due to the presence of peanuts.

Overall, pad thai is much sweeter in taste than drunken noodles due to the presence of palm sugar.

It is also slightly sour as tamarind paste is one of the major ingredients here.

Drunken noodles are definitely on the spicier side. It is because they consist of Thai basil which adds to its spiciness.

Additionally, drunken noodles have a strong savory taste due to the presence of various sauces such as soy sauce, fish sauce, and oyster sauce.

The final sauce is also thicker in consistency compared to the pad thai sauce.

Thai food is comparatively healthier than many other meals out there. It contains fewer calories and more protein because of chicken, tofu, beef, etc.

Pad thai and drunken noodles have their fair share of calories.

However, there is very little difference in the calorie content and health factor of both pad thai and drunken noodles.

Pad thai has a calorie content of around 357 calories per cup. The sodium content is likely to be high as different sauces are used for this recipe.

Drunken noodles also have a similar calorie count of around 390 calories per cup. Here too, the sodium content is quite high.

So, it is best to avoid both pad thai and drunken noodles if you’re on a low-sodium diet.

There are some minor differences in the color of pad thai and drunken noodles. This is because of the uses of different sauces and spices.

Both pad thai and drunken noodles have a very strong smell that may not sit right with people.

They contain fermented sauces which may give off an unfamiliar smell.

The color of pad thai depends on its authenticity and recipe.

If we talk about the traditional pad thai prepared in Thailand, then it is slightly orange in color. This color is mainly because of the tamarind paste added to the noodles.

Moreover, if there’s shrimp present in the dish, then it may also add its own unique color to it.

Sometimes, if you notice a very noticeable red color in pad thai, then it is because of ketchup.

A lot of restaurants, mainly in the US, make use of ketchup in the pad thai noodles.

This could be because drunken noodles don’t contain tamarind paste responsible for the distinctive orange color in Pad Thai.

Pad Thai Or Drunken Noodles: Which One To Go For?

Pad thai and drunken noodles have their own unique taste and qualities. Yet, one may suit your palate while the other just won’t.

Let’s see which one you should try first:

There is no doubt that both pad thai and drunken noodles have a classic Thai taste with mild sweetness.

Yet, the pad thai noodles have a crunchier and nuttier flavor compared to the spicy and savory flavor of drunken noodles.

We suggest opting for drunken noodles if you want a super spicy and savory dish. As for those who cannot digest spicy food, pad thai is a better choice!

So, if you’re counting each calorie, go for pad thai over drunken noodles.

Drunken noodles are usually easier to cook compared to pad thai. There’s less preparation time required and the ingredients used are quite basic as well.

Keep in mind this may differ from recipe to recipe.

Pad thai and drunken noodles are the two common dishes found in almost every Thai restaurant. You can also easily prepare them at home.

In either dish, you can also experiement with different varations of vegetables and protein picks to keep the dishes tasting fun and new every time.

Up Next: Reheating Thai Food – The Ultimate Guide

The 17 Best Substitutes For Onion Powder

How To Cook Bagel Bites In An Air...

The 7 Best Oranges For Juicing

The 9 Best Substitutes For Cremini Mushrooms

What Is A Picanha Cut And How Do...