Home Foodsguy Fried Vs Steamed Dumplings – What’s The Difference?
FoodsguyThis vs That 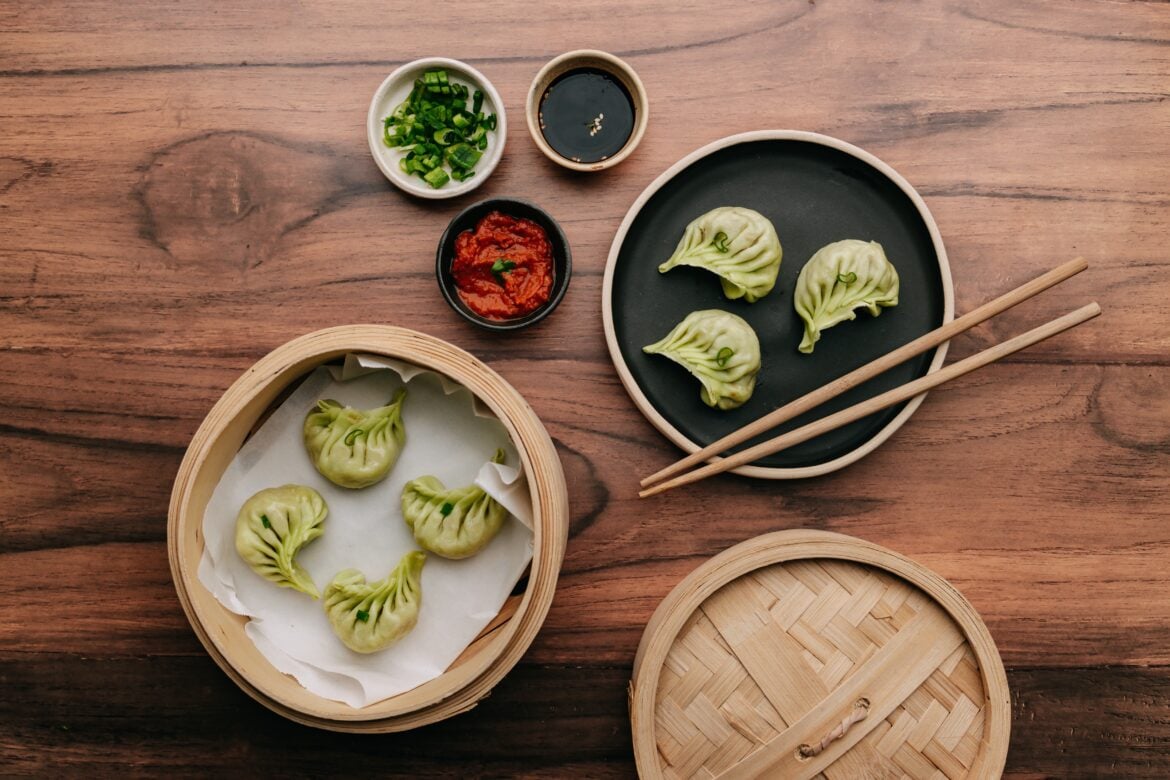 Dumplings come in so many shapes, forms, and sizes, and are the ultimate comfort food enjoyed in so many cuisines around the world. Two of the most common ways to prepare dumplings are to either fry or steam them.

Read on to find out more about the differences between fried and steamed dumplings, which are generally healthier, how they are cooked, and much more.

What Are Fried And Steamed Dumplings?

Dumplings are a small mass of soft dough that is often rolled out to encase a filling or formed into a mound and cooked as-is.

They are most well known from Asian cuisines – mostly China, Japan, Korea, and Vietnam – and have become extremely popular across the globe.

Known as jiaozi to the Chinese and gyoza to the Japanese, dumplings can be both sweet and savory and may be prepared using a variety of different cooking methods.

Two of the most popular methods of cooking dumplings is to fry or steam them. Fried dumplings are cooked in a pan in virtually any type of fat, whereas steamed dumplings are set in a basket over boiling water.

Some of the most popular dumplings include:

What Is The Difference Between Fried And Steamed Dumplings?

Fried and steamed dumplings are assembled in the same way, starting with a dough made from flour and water, which is kneaded and rolled out to encase a filling of your choice.

The filling depends on your taste and the type of dumpling you are making. The most popular dumpling filling in China is pork and scallions, although you can experiment and use a wide range of ingredients such as beef, chicken, and your choice of vegetables.

Once the dumplings are prepared, they need to be cooked either by frying or steaming them, and this is where the difference arises.

The main difference between fried and steamed dumplings is the way they are cooked, and how that affects the taste and texture of the dumpling.

Fried dumplings, also called potstickers, are cooked in a pan and are fried and steamed at the same time.

They are placed in a little bit of oil and some water is added to the pan before covering it for about 10 minutes. The frying gives the dumplings a crispy exterior in contrast to their soft interior.

Fried dumplings have a slightly nutty and caramelized flavor due to being fried in oil. The type of oil used also affects the final taste of the dish.

Steamed dumplings are the most traditional type of Chinese dumplings and are made in a steamer, giving them a soft and chewy exterior.

They are soft, squishy, and succulent and their exterior tastes somewhat bland compared to fried dumplings.

For a crispy exterior, go for fried dumplings, but if you want a soft outer layer, steamed dumplings are the best choice.

Which Is Better – Fried Or Steamed Dumplings?

Deciding whether you want fried or steamed dumplings depends entirely on your preference.

Many people say that fried dumplings are more flavorful because they are fried in oil and have a crispy exterior, which gives their flavor an additional depth.

Steamed dumplings, however, are more common in Chinese cuisine and are prepared in a steamer or a pan filled with water.

Other than a few textural and taste differences, fried and steamed dumplings are also different in terms of nutrition. Let’s find out how!

Which Is Healthier – Fried Or Steamed Dumplings?

Dumplings are a fairly healthy option; however, when it comes to which type of dumpling is healthier, steamed dumplings are the clear winner as they contain less oil than fried dumplings.

Since fried dumplings use oil for cooking them, they have a higher fat content than their steamed counterparts. Other than the cooking method, the quality of the filling can also have an effect on how healthy and nutritious the dumpling is.

Your choice of meat will be a huge determining factor, with lean meats being a good choice for a low-fat dish.

Apart from the type and quality of the meat, the vegetable content also impacts how many vitamins and minerals you are getting.

Regardless of the type of dumpling you opt for, keep a check on the quantity you are eating as it is very easy to eat too many. Remember, everything is good in moderation!

How To Make Fried Dumplings

Fried dumplings are a popular choice among dumpling lovers and are usually filled with pork, cabbage, shiitake mushrooms, and garlic. The ingredients can be replaced to create new and exciting combinations of your choice.

There are no specific rules when it comes to the filling, only how you cook them. Fried dumplings are also referred to as pan-fried dumplings and actually undergo a two-stage cooking process.

In the first stage, the dumplings are fried in oil in a hot pan and then steamed by adding some water to the same pan. This ensures that the dumplings have a crispy bottom, a soft top, and a delicious and tender filling.

Tip: Use a pan with a thick and heavy bottom to ensure even heat distribution so that each dumpling can be cooked to perfection. Non-stick pans are also a good choice. You may also use some extra oil and avoid moving the dumplings until the bottom part starts to harden a little.

If you’re more of a visual learner, here’s a helpful beginner’s guide from Tasty on YouTube:

How To Make Steamed Dumplings

Steaming is another popular method for cooking dumplings and is the healthier option out of the two due to the absence of oil in the cooking process.

The cooking time is also shorter compared to fried dumplings and is stress-free. You simply set a timer and let the steamer do its job! Also, steamed dumplings retain their shape better during the cooking process.

Traditionally, steamed dumplings are made in cute little steamer baskets (like this one), but you can use a regular pot as well.

Tip: To prevent the dumplings from sticking to the steamer basket, place a lining between them. You may use napa cabbage leaves or a wet cheesecloth to line the steamer. If you are using a metal steamer, you can even brush a thin layer of oil on the rack.

For a different type of steamed dumpling, check out this video from emmymade on YouTube on how to make the star of a recent Pixar short film: bao!

Can You Deep Fry Dumplings?

Deep frying is another way to cook dumplings that give them an even crispier exterior and a juicy and soft interior. They are oilier than their pan-fried and steamed counterparts and may not be the healthiest option.

Chinese dumplings are usually pan-fried or steamed and you may not come across many deep-fried varieties. They are, however, available in several American restaurants, though they are not as common.

Deep-fried dumplings use the same variety of fillings as pan-fried and steamed dumplings, and are also assembled in the same way.

Check out this recipe from Souped Up Recipes on YouTube to learn how to make the Cantonese deep fried dumpling, ham sui gok:

Can You Air Fry Dumplings?

Air frying is a popular cooking technique that has taken the world by storm. There’s nothing you can’t make in an air fryer! If you’ve never tried air-fried dumplings, you’re seriously missing out.

You can air fry fresh dumplings made from scratch or frozen dumplings that you made earlier or bought from the market.

Air frying dumplings is a great way to make crispy dumplings using less oil than when pan frying. It is healthier, easier to make, and the end result is super crispy and delicious!

Note: It is important to remember that not all air fryers are the same when it comes to determining the exact cooking time.

Some air fryers are bigger than others, and some are quicker to heat up. Make sure to read the instruction manual that came with your air fryer and keep an eye on your dumplings if it is your first time making them in an air fryer.

Here’s a quick video from Air Fryer World on YouTube if you’re working with frozen dumplings (or egg rolls):

What Can You Serve With Fried And Steamed Dumplings?

Fried and steamed dumplings that are stuffed with delicious filling are a meal in themselves and do not need to be paired with anything.

However, pairing them up with a dipping sauce can really elevate their flavor and help cut through the rich and savory filling.

To make the most delicious dipping sauce for dumplings, combine some soy sauce, vinegar, sesame oil, garlic, and hot chili oil. You can also add thin strips of ginger or scallions to add some texture and flavor to the sauce. To give it a hint of sweetness, add some brown sugar into the mix.

Now that you know all about fried and steamed dumplings and how they are different from one another, here are a few additional questions we thought you might have.

What are boiled dumplings?

Boiling is another way to cook dumplings where they are added to boiling water and left to cook for a few minutes. Boiled dumplings can be cooked directly in the soup or stew that you intend to serve them in.

Are dumplings and wontons the same?

Wontons, also known as hun dun, are one of the many distinct types of dumplings in Chinese cuisine. They come in small parcels and are often filled with pork and bok choy. They can be steamed, fried, or boiled in a wonton soup.

What are sweet dumplings?

Chinese sweet dumplings, also called tangyuan, are a tasty traditional treat filled with a peanut butter mixture. They are smooth and slightly sticky on the outside with a sweet, nutty, and gooey filling on the inside.

How To Reheat Potstickers – The Best Way

How To Reheat Dumplings – The Best Way