Does Soy Sauce Have Alcohol? 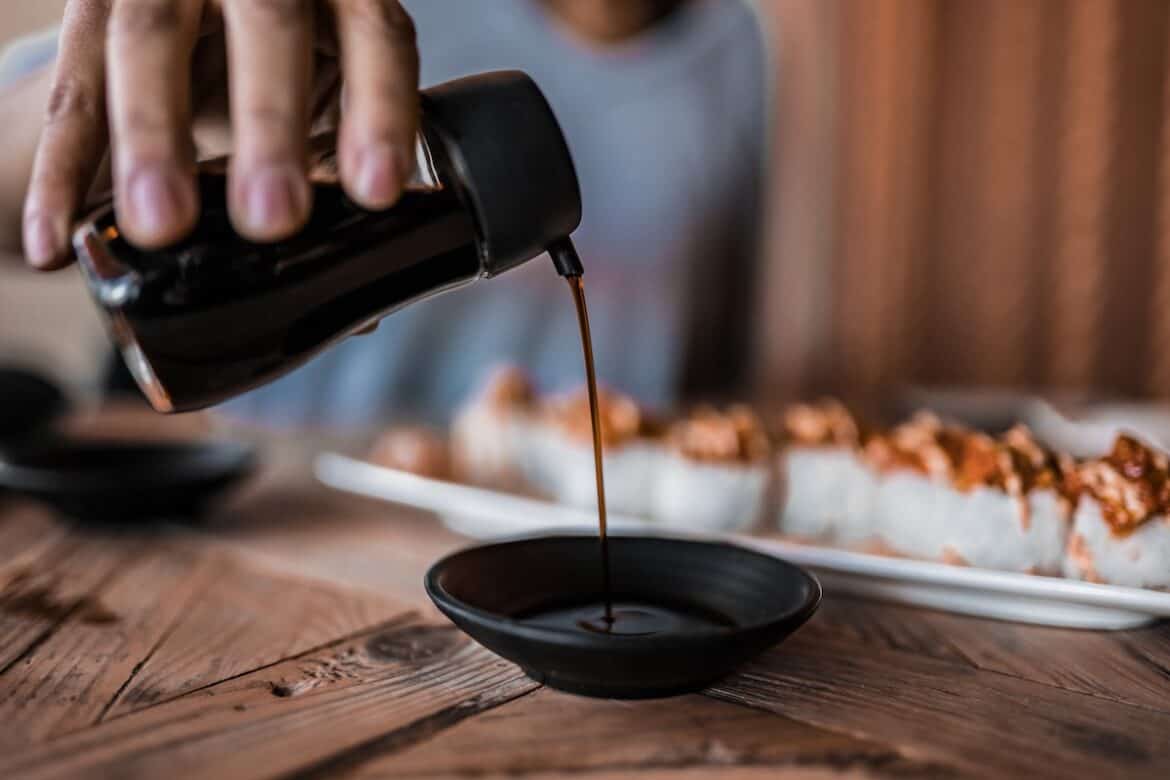 Soy sauce is perhaps one of the best condiments to have come out of Asia. Its importance is immeasurable in many cuisines as it is the cornerstone for several dishes across the world.

Traditionally, soy sauce is made by fermenting soybeans and wheat. Yes, this is the same process that yields alcohol.

Does soy sauce contain alcohol? Yes, traditional soy sauce does contain some alcohol. Soy sauce is made using water, soybeans, wheat, sea salt, and yeast. You might not notice alcohol on the list but once these ingredients are processed and left to ferment, the sugars in the wheat break down to form alcohol.

Read below to learn more about soy sauce, how it’s made, why it has alcohol, and whether it is available in alcohol-free varieties!

How Is Soy Sauce Made?

Soy sauce is a worldwide phenomenon that once had very humble beginnings. It was created in the 13th century in a small town in Japan by a Buddhist monk, who discovered it as the byproduct of traditionally stored and fermented miso paste.

Alcohol is not added to soy sauce. It forms naturally as a result of the fermentation process that can take up to 3 years.

Soy sauce is produced differently all over the world but its core recipe and technique remain the same, even after around 750 years!

The process begins by steaming soybeans and separately toasting the wheat in a large skillet. The wheat is then crushed and mixed with the soybeans along with a starter. This allows for the wheat to begin fermentation.

In its essence, fermentation is the process where organic substances break down into their most basic forms. For example, the sugars in the wheat break down to form alcohol.

But there isn’t a lot of alcohol in soy sauce, to begin with. On average, a batch of soy sauce will contain as much as 1.5-2% alcohol—certainly not very much at all!

Once the wheat and soybean mix has begun fermentation, the mixture is added to a brine made by mixing sea salt and spring water. Companies may also reuse bourbon barrels from local distilleries as a fermentation vessel for the soy sauce.

The soybean and wheat mix is added to the brine and mixed. The barrel is then sealed and left to ferment. Workers will then periodically mix the barrel starting from once a day to once a week until the mixture has fully fermented.

The total fermentation process can take about 18 months to even 3 years! Once the barrel is ready to be processed, workers will pour out the contents onto a muslin cloth that is then wrapped around the poured mixture.

Wooden planks are then placed over the cloth containing the mixture to create a stable surface. A hydraulic press is then used to squeeze out the soy sauce.

The collected sauce is further filtered and pasteurized before it is cooled down and packaged. This pure and traditionally made soy sauce will contain some alcohol but again, it won’t be sufficient enough to cause any physical effects.

If you think that the flavor of soy sauce has a hint of alcohol in it then you would be thoroughly wrong.

Soy sauce is a salty mixture that has a lot of umami flavorings. It is primarily used to flavor different vegetable and meat dishes and is used in sauces and marinades too.

Traditionally produced soy sauce with a 2% alcohol content has a more pronounced and mature flavor. It is also slightly less thick but richer than synthetic soy sauce that is produced using corn syrup.

If you want truly want an authentic flavor without adulterations then we can’t recommend traditional soy sauce enough.

However, if you want to avoid alcohol or pricier soy sauce brands then any tamari-based or synthetic sauce will work well (more on this below).

Soy sauce has wide applications in the kitchen. It is typically used either as a replacement for salt in recipes or to add a rich and complex flavor to otherwise simple dishes.

It is used as a condiment to flavor soups and can also be poured over salads and gravies. For example, in Chinese cuisine, soy sauce is extensively used in both noodle dishes and broths.

It also has applications in other forms of cooking too. Soy sauce can be used to baste a roast and to season sauces as well!

When we talk about traditional soy sauce, it may be very difficult to separate alcohol from the equation.

After all, the sauce is made by fermenting wheat, which unfortunately also makes it unsuitable for people with gluten intolerance.

The solution to this problem can be divided into two categories, or rather, two types of products:

This is the most commercial type of soy sauce that you can buy. It does not contain wheat and is made using corn syrup, hydrolyzed soy, salt, and colorings.

While this product tastes remarkably similar to traditional soy sauce, some people may be able to instantly take notice of the small differences in flavor and quality.

Synthetic soy sauce is an excellent alternative to regular soy sauce as it is usually alcohol-free. This also makes it gluten-free.

There are several varieties of artificial soy sauce, some use higher quality soybeans while others process the mixture a bit differently.

Since the synthetic soy sauce market is so varied, we highly recommend that you try different brands until you find a suitable replacement.

If you are looking to completely replace soy sauce because of its high sodium or alcohol content then we recommend going for a replacement sauce like BetterBody’s Organic Coconut Soy Sauce.

This tastes the same as soy sauce but is made using coconut blossom nectar instead of soybeans and wheat.

Tamari is a byproduct of miso and traditionally contains only soybeans instead of a mix of soybeans and wheat.

This soy sauce is much closer to the Chinese variety of soy sauce and since there is no wheat in this product, it is also alcohol and gluten-free.

Tamari soy sauce contains all of the flavor notes as soy sauce but is made with a higher percentage of soybeans.

This produces a condiment that is thicker, darker, and has a more nuanced salinity compared to traditional and even some artificial soy sauce brands.

There are a lot of brands in the market that sell tamari-based soy sauce but we think Kikkoman Gluten-Free Tamari Soy Sauce is the best for everyday use!

Other Types Of Soy Sauce

There are several other types of soy sauce on the market, each with varying degrees of alcohol. Here are some of the most popular varieties of soy sauce!

This sauce is traditionally called Koikuchi Shoyu and is extremely common in Japan and other regions around the world.

It is widely used to flavor and color noodles and other ingredients as it has a distinct reddish-brown color.

Dark soy sauce is several degrees stronger than regular soy sauce and can even subdue the saltiness of the sauce. This soy sauce also provides a more pronounced aroma than other varieties too.

This means that light soy sauce may have an even smaller percentage of alcohol by volume. It has a milder appearance and a faint aroma, especially compared to dark soy sauce.

We like to think of Shiro as an anti-soy sauce as it is produced using a higher proportion of wheat than soybeans.

The traditional recipe for Shiro produces a very light-colored sauce that can be mixed with just about anything that calls for regular soy sauce without adding any color!

Of course, since this soy sauce is fermented using a higher percentage of wheat, it will naturally contain more alcohol than even the regular variety.

Soy sauce is available in many different varieties, some inherently contain alcohol while others may be completely alcohol-free!

Now that you know all about soy sauce and its various types, here are some related questions!

Soy sauce can resist spoilage due to its high sodium content, which makes it very difficult for harmful microorganisms to survive.

However, a bottle of soy sauce that has not been handled or stored properly may lose a lot of its flavor or ultimately, go bad within the expiry date.

Soy sauce contains certain enzymes and compounds, such as histamine and tyramine, that may cause toxicity when taken in higher doses or when consumed regularly.

Please keep in mind, however, that soy sauce is generally considered to be extremely safe if consumed in moderation, though you may want to check the back of the bottle for allergen information before consumption.

If you’re interested in making your own soy sauce at home, here’s a great video going over how to accomplish this process!

Up Next: How Long Do Chocolate Covered Pretzels Last?

What Are Rice Noodles?