Home Foodsguy Swiss Vs Provolone – What’s The Difference?
FoodsguyThis vs That 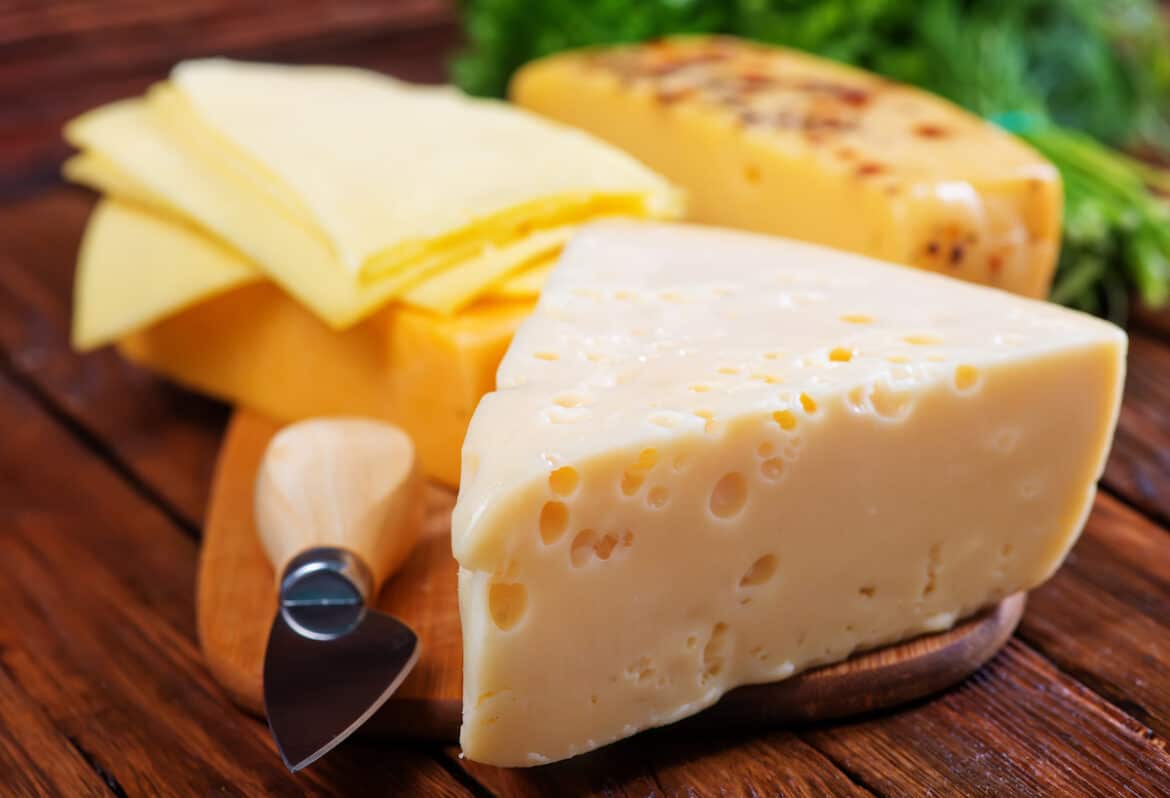 Modern grocery stores are a jack of all trades. You can find just about any ingredient you may need. Especially in high end or specialty grocery stores, that variety can sometimes be overwhelming.

One of the most overwhelming parts of a grocery store can be the cheese section. There are so many different types of cheese. If you have a particularly well-stocked store you may even have several options for each type of cheese.

With many cheeses sharing a similar color and shape, it can sometimes be difficult to know what to choose. Sometimes the difference between two types of cheese is a little, and sometimes it’s a lot.

So, what’s the difference between swiss and provolone? Although similar in color, they’re made in different ways, in different parts of the world. Swiss tends to have a nuttier, more pronounced flavor and provolone is usually more mild and tangy. Read on to learn about the differences between the two that help make them unique.

Let’s take a closer look at what makes these two cheeses unique!

Provolone cheese has its origins in Italy. It is a type of stretched curd cheese called aged pasta filata. Essentially, this means that the cheese is a lot more labor intensive to make.

You start with cow’s milk, separating the curds out from the whey. Then that curd is stretched by hand. After enough stretching, it is hand-formed, placed in a net, and hung to age.

This is different from many kinds of cheese that are made in a mold or pressed into shape with weights.

Swiss cheese is, not surprisingly, from Switzerland. In fact, the name ‘swiss cheese’ refers to a whole group of cheese from the area that mimic the popular Emmental cheese.

To make swiss cheese, you use cow’s milk to produce curds, which are then pressed into a mold. The mold has holes, and a weight is used to push moisture out of the curd mixture while it is in the mold.

This pressed cheese is placed in a brine bath of very salty water. This draws even more moisture out of the cheese and allows the bacteria that give the cheese its flavor to begin their work.

After spending time in the bring bath the cheese is removed and placed on racks to dry age.

Swiss is a washed rind cheese which means that during the aging process, additional wet and dry flavor additives are brushed on in a process called affinage.

Of course, the most notable quality of swiss cheese is the distinctive holes. During the aging process bacteria release carbon dioxide, creating bubbles in the immature cheese that become holes when the cheese is sliced.

With any type of cheese, the taste can change as it ages. This means that many kinds of cheese have both ‘young’ and well-aged versions available. The longer a cheese ages the more intense its flavor becomes.

Most provolone have a very mild taste that is slightly sweet and buttery with a pleasant tang. Provolone that has been aged longer has less sweetness and a much more pronounced tang.

Some varieties of provolone are also smoked, which adds smoky elements to a stronger tangy taste.

Swiss cheese is also a slightly sweet cheese, with a flavor that is nuttier than provolone. You can get a clue as to how strong the cheese’s flavor will be based on how large the holes, or ‘eyes’, are.

The longer a swiss cheese ages, the more time the bacteria that makes the cheese have to create those bubbles. Since the bacterial activity is what gives the cheese its flavor, bigger holes means a more intense flavor.

Depending on how long a particular swiss or provolone has been aged, it can be more or less hard. In general, though, provolone has a higher moisture content than swiss which makes it softer.

Softer cheeses can be harder to slice and may need to be chilled beforehand to get a more even result. This doesn’t always mean they melt well, though.

Provolone melts but does not turn completely liquid and can be stringy. This is because it got its start as a ‘stretched curd’ cheese.

Slightly harder cheeses like swiss slice much more easily and this is what makes them ideal for sandwiches or cheese plates.

Because swiss has a lower fat content than other cheeses and a lower moisture content, it too becomes stringy rather than creamy when heated.

The stringier texture of provolone and swiss when melted is not necessarily a bad thing.

They may not make ideal cheeses for sauces, but they are excellent for an Instagram-worthy “cheese pull”. Think homemade pizza rolls and elevated grilled cheese.

When cold, provolone is slightly more pliant than swiss. If you were to slice them both for sandwiches, for example, a slice of swiss folded in half would break in two quite easily.

A slice of provolone would bend a lot farther before separating into two pieces.

Both provolone and swiss make excellent sandwich cheeses when cold. You can slice most common varieties quite thick or thin to suit your tastes. They are easily available and have a mild taste that goes well with most sandwich fillings.

When melted, provolone and swiss can become stretchy, ropey, or stringy rather than melt into a smooth creamy texture. Because of this, it’s uncommon to see these cheeses used in hot foods like mac and cheese.

A common hot preparation where both of these cheeses shine is pinwheels. You can make these with or without meat.

You can take thinly sliced meat or leafy greens that keep their shape when warmed, stuff with cheese and seasonings, roll and cook.

Pull-appetizers are another great way to make use of these cheeses.

Essentially, any hot food where you want the warm gooey deliciousness of cheese without having it melt everywhere and completely lose its shape, provolone and swiss are both good choices.

Now that we’ve gone over some of the main differences between swiss and provolone, let’s take a look at some related questions that we thought you might’ve had while reading this article!

Can I substitute swiss cheese for provolone?

Swiss can make a good substitute for provolone and vice versa. The only thing you really want to think about first is whether the nuttier flavor of swiss compared to provolone will taste good with your dish.

As far as texture and the way they melt, swiss and provolone are quite similar. As long as the difference in taste isn’t a deal-breaker for you, swiss cheese can make a good substitute for provolone in both hot and cold dishes.

What cheese can I use in place of provolone?

If you’re out of provolone, any semi-soft cheese with a mild flavor will make a good substitute. Some of the better options are going to be fontina, a low-moisture mozzarella, muenster, swiss, or gouda.

What’s the difference between baby swiss and regular swiss cheese?

Baby swiss is simply a swiss cheese that hasn’t been aged for very long. Baby swiss will have smaller holes than regular swiss, or sometimes no holes at all.

Unless you are slicing wedges, the size or lack of holes is not going to affect the texture whatsoever. Because baby swiss hasn’t had as much time for the bacteria to intensify the flavor, the taste is a lot milder and a bit sweeter.

What cheese can I use in place of swiss?

Depending upon the dish you’re planning to cook, there are a lot of options for you to choose from if your recipe calls for swiss and you don’t have any available.

Any cheese you substitute for swiss should have a similar taste and texture. Aside from provolone, consider jarlsberg, emmental, fontina, gruyere, or havarti.

Is swiss better for you than provolone?

Whether or not one cheese is better than the other is going to depend on the rest of your diet and what particular nutrients you are trying to consume more or less of.

Up Next: The Best Substitutes for Water Chestnuts

The Best Substitutes For Water Chestnuts