The Best Substitutes For Water Chestnuts 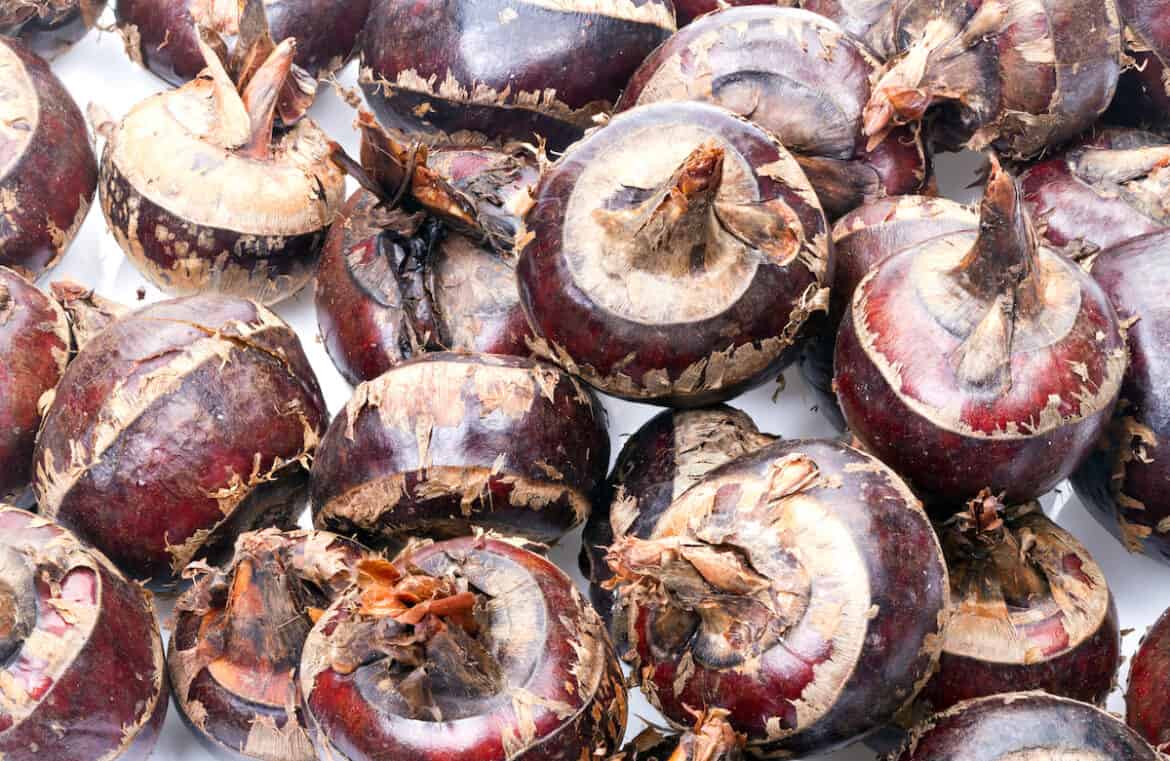 Water chestnuts are commonly used in Chinese recipes, as well as all over southeast Asia. They are prized for their delicate crunch.

Their subtle flavor means they can be added to almost any dish without compromising the flavor profile.

Chestnuts and water chestnuts are not related at all. The name comes from their appearance when first taken out of the water where they grow.

They’re about the same size as a chestnut and are covered in a thin brown skin, so water chestnuts and traditional chestnuts look similar.

In fact, water chestnuts are actually a tuber, similar to a potato. These aquatic tubers are delicious, but not always easy to find in your local grocery store.

Read on to find out how each option stacks up to the flavor, texture, and color of water chestnuts.

Turnips can be a good substitute for water chestnuts. If you plan on using turnips, it is better to choose white turnips instead of other varieties. White turnips don’t have the strong pepper flavor that other types of turnips do.

Generally, white turnips are going to be in season during the winter months. If your local grocery store has a robust produce section you might be able to find them during other times of the year as well.

Because people often eat both the root of the turnip and the greens, you can often find turnips whole with both roots and greens still attached.

When substituting for water chestnuts, you will only use the large bulb. Cut off any smaller roots or greens that may be attached.

If your recipes call for any type of greens, you can make good use of the turnip greens by gently sauteing them and adding them to your recipe as well.

The flavor is mild, with peppery notes that go well with many of the other flavors used in Asian cooking where water chestnuts are so popular.

While the flavor is mild, white turnips are a little bit sweet.

They’re best to use in recipes where this flavor won’t compete with other ingredients.

Jicama has an extremely mild flavor that is probably most similar to water chestnuts out of all the substitutions listed here.

If you are preparing a dish that uses a lot of water chestnuts or showcases their subtle flavor, this is the best substitution for you to use.

Like white turnips, jicama is also a root vegetable. It’s similar in texture to a potato when raw, but has more protein and fewer carbohydrates. You can dice it small and it impersonates the texture, color, and flavor of water chestnuts well.

If you want to retain the crunchy texture, be careful not to cook it too long. Otherwise, the texture becomes soft and the flavor becomes sweeter and more pronounced as the natural sugars in the root caramelize.

A short cook time on higher heat is preferable to a long, slow cook time when using jicama as a substitute for water chestnuts. However, you don’t want to serve them raw. Because they are starchy, raw jicama can be unpleasant in the mouth.

Jicama is a great substitute in terms of color, flavor, and texture. It is better than Jerusalem artichokes in dishes that are served warm because it holds its texture longer.

Sometimes also called sunchokes, Jerusalem artichokes are actually not related to artichokes at all. They are part of the sunflower family. Like jicama and turnips, the part that we purchase in the store to eat is a root that grows underground.

When cooked they turn quite soft and taste like a mild artichoke heart. Prepared raw, they stay crunchy and make a great stand-in for water chestnuts. This makes them especially useful as a substitute in recipes that are served cold.

Because of their shape and the color of their skin, Jerusalem artichokes look similar to ginger root.

When picking them out in the store, you want to look for a firmer texture with smooth skin. Wrinkles in the skin indicate that the root is starting to soften, like overripe fruit.

When using Jerusalem artichokes as a replacement for water chestnuts, it is best to prepare them raw. The skin should be removed with a vegetable peeler or sharp knife, and the root diced up into small pieces.

If you can’t find jicama but you can find Jerusalem artichokes, both of them are excellent stand-ins for the mild flavor of water chestnuts, with similar color and texture also.

While not a great substitute for the flavor or color of water chestnuts, celery is available in almost every grocery store.

In many recipes that use water chestnuts, only a small amount is used to give some crunch and body to a dish. That’s where celery comes in.

When preparing celery as a replacement for water chestnuts, take care to use the lower portions of the stalk.

The whiter the celery is, the less distinct the “green” celery flavor will be. This way it’ll blend in better when you’re cooking.

It can also be helpful to dice or slice the celery quite fine and add it in closer to the end of cooking time. When cooking for a while, celery can become quite soft which you want to avoid.

It’s also helpful to slice celery crosswise as opposed to lengthwise when using as a substitute for water chestnuts.

Celery has tough fibers that run the length of each rib. If you cut the celery crosswise, this fiber is divided into smaller sections and is much less noticeable.

Now that we’ve gone over some of the best substitutes for water chestnuts, let’s take a look at some related questions on the topic!

Can I use chestnuts in place of water chestnuts?

Although they look similar, water chestnuts and ‘regular’ chestnuts are actually quite different.

Water chestnuts have a more delicate crunch. They also have a flavor that is more subtle and is usually described as mildly sweet rather than nutty.

For most recipes that include water chestnuts, standard chestnuts would not make a good substitute. The end result would be a dish that is overly crunchy and overpoweringly nutty in taste.

What can I substitute for water chestnut flour?

In some countries, water chestnut flour is used to make bread during religious fasts that prohibit the use of cereals like wheat for this purpose.

Almond flour is also not a cereal, so if you use water chestnut flour for this reason you can still substitute almond flour.

Can I use bamboo shoots instead of water chestnuts?

Bamboo shoots can be used in place of water chestnuts. However, canned bamboo shoots are not a great choice as they are quite soft.

One of the reasons water chestnuts are usually called for in recipes is because of their unique texture.

If you plan to use bamboo shoots in place of water chestnuts, we recommend only using fresh shoots as these have a better flavor and texture compared to canned bamboo shoots.

However, fresh bamboo shoots can be hard to find in many American grocery stores.

Are canned water chestnuts just as good as fresh?

Fresh water chestnuts are often hard to find. If you do find them, they will require peeling which can be an unwanted extra step in your cooking process.

If you have a recipe that calls for water chestnuts, it often will not specify fresh or canned. This is because the canning process does not have a major effect on the texture, color, or taste of water chestnuts. Canned is just as good as fresh.

What is the difference between chestnuts and water chestnuts?

Chestnuts are a nut. They grow on a tree, have a firm texture and a nutty flavor. They are traditionally served roasted in the wintertime as the roasting process brings out their flavor.

Water chestnuts are actually an aquatic vegetable. The part that we use in recipes is a tuber, similar to a potato.

They are softer than a nut and very mild in flavor. Their name comes from their visual similarity to chestnuts when they are first harvested.

Up Next: Can You Freeze Pasta Salad?