Do Sun-Dried Tomatoes Need To Be Refrigerated? 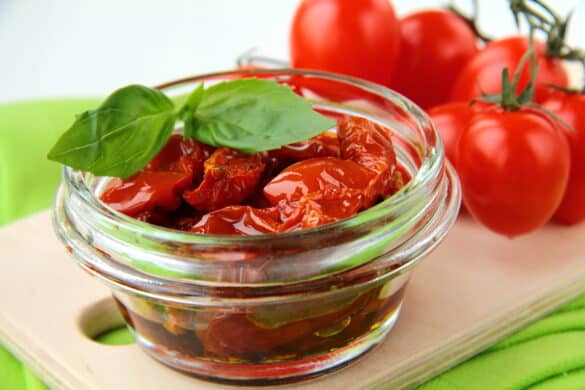 A very common problem we often run into is over-buying cherry tomatoes. They are such a delicious and versatile ingredient, but they don’t seem to last very long. Soon after, they start to enter the over-ripe stage where they aren’t very pleasant to consume.

One of the most popular solutions is to make sun-dried tomatoes. Unfortunately, they also seem to go bad quickly even if you store them in a cool, dark area – like store-bought packages state. So you may be wondering about storage and refrigeration needs.

What Are Sun-Dried Tomatoes?

Sun-dried tomatoes are just what their name implies: tomatoes dried in the sun.

Do not confuse them with dried or dehydrated tomatoes, however, as these are dried in an oven, and not the sun. There is also a big difference in flavor as well as which elements the tomatoes were exposed to.

Sun-dried tomatoes are made from any type of small tomato (usually cherry) that has become too ripe and cannot be sold as fresh tomatoes. They are picked by their shriveling skin and soft texture. They have already started to lose some moisture.

First, the tomatoes may be halved or quartered. Then they are treated with salt to extract as much moisture from them as possible. This also helps to retain their color, act as a preservative, and add a salty flavor.

The tomatoes are then placed in the sun to dry for 4-10 days.

After their drying process, they are packaged in several different ways. This packaging is what will determine what type of sun-dried tomato you have, and how you should store them.

Because the tomatoes were dried in the sun in an environment with a very low temperature for a long time, bacteria will still be able to get on the tomatoes, no matter how hygienic the environment was.

Bacteria thrive on oxygen and moisture, thus by removing those two factors you will be able to prevent them from growing mold even if there are bacteria on them.

Place these tomatoes in a re-sealable bag, a glass jar, or an air-tight plastic container. Do not store these in metal containers as they will absorb the metallic flavor and color.

Make sure the container or bag has as little air as possible inside by either squeezing out any air or packing the container tightly.

These dried tomatoes can be stored in a cool, dry, and dark cabinet for up to a year. Once opened, they will last between 4-8 weeks depending on their moisture content, humidity, and exposure to the elements.

But, once opened, they have about 2-3 weeks before going rancid. Oil-packed tomatoes have to be stored in the refrigerator.

This also applies to any type of sun-dried tomatoes that contain other ingredients. Fresh herbs, spices or garlic, naturally contains bacteria that will multiply as soon as they are exposed to heat and moisture.

The refrigerator will make the olive oil solidify and turn a white color but this is easily corrected. When you’re ready to use or eat your tomatoes, simply leave the packet out on the counter for about 30 minutes and the oil with become a clear liquid again.

Check the packet weekly for any mold growing inside or any rancid smells.

Up Next: Can You Freeze Green Tomatoes? – What You Need To Know

Gherkin Vs Pickle – What’s The Difference?

The Absolute Best Bread For BLT