Home Foods Guy Gherkin Vs Pickle – What’s The Difference?
Foods GuyThis vs That

Gherkin Vs Pickle – What’s The Difference? 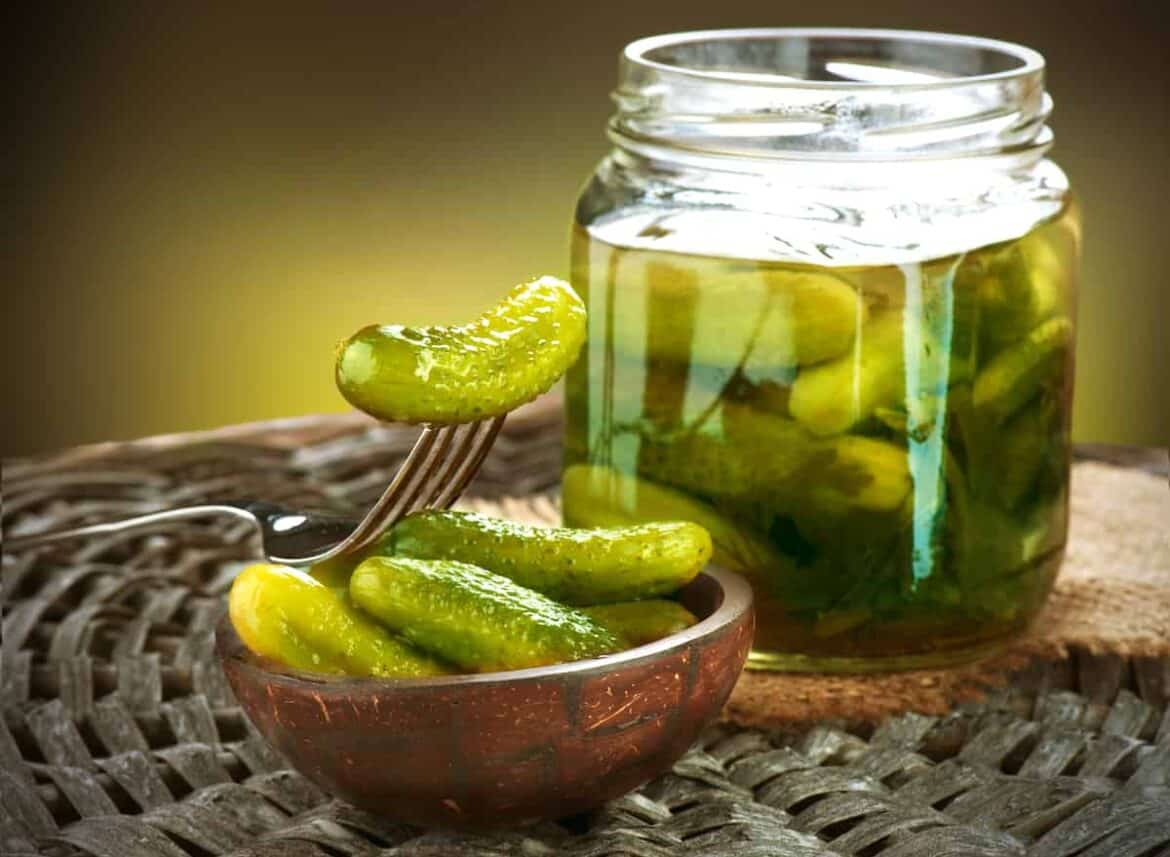 Gherkins and pickles are both interesting terms which can mean a variety of different things, depending on where you are in the world and how scientific you’re trying to be. Many people are unsure of their precise meanings, and how to use each one.

So what’s the difference between a gherkin and a pickle? Each word is used slightly differently depending on where you are in the world. In North America, a pickle is usually a pickled cucumber and a gherkin is a specific type of pickled baby cucumber. A ‘gherkin’ usually refers to some kind of cucumber, but a ‘pickle’ may or may not.

However, in different parts of the world, “pickle” can refer to any fruit, vegetable, or edible item that has been pickled, whereas a gherkin is specifically a pickled cucumber.

There are also differences between a plant that is scientifically considered a gherkin and one that is a common cucumber.

For most intents and purposes, pickles and gherkins are both small pickled cucumbers. But through this article, we’ll outline where they may differ and whether or not it those differences really matter to your life.

What is a Gherkin?

The answer to this question depends on how scientifically accurate you want to be or whether you prefer to go with common usage.

In the UK, Ireland, Australia, New Zealand, and South Africa, however, all pickled cucumbers are generally called gherkins, and calling them pickles would seem strange to others.

Crazy enough, you can actually purchase pickled Gherkins on Amazon.

Botanically speaking, there is a plant called West Indian gherkin or burr gerkin which is a very close relative of cucumbers, though they are not of the exact same plant. A common cucumber is Cucumis sativus, whereas this type of gherkin is a Cucumis anguria.

To make things even more confusing, there is also a plant native to Mexico and certain parts of Central America that is known as a Mexican Sour Gherkin or Mexican Sour Cucumber.

This plant is also very similar to cucumbers, especially in terms of how the vine and it’s fruit grow, but it is an entirely different plant altogether, that is: Melothria scabra.

Even in dictionaries, gherkins have caused some confusion. Some, like Collin’s dictionary, define a gherkin as “small green cucumbers preserved in vinegar.”

Others, like Dictionary.com and Cambridge dictionary, make sure to mention that gherkins are either a “variety of cucumber” or a “type of cucumber” that is used in pickling.

Merriam-Webster also goes on to say that gherkins are immature fruits of cucumbers, which puts it in line with other dictionary definitions.

Where Do Gherkins Come From?

The gherkin plant mentioned earlier known as the burr gherkin or West Indian gherkin is thought to be native to southern Africa, but it now grows in any warm climate around the globe.

The fruit that grows on the gherkin plant can be eaten fresh and is not, in fact, the type of gherkin to be commonly sold as gherkins for pickling.

Commercially produced pickles, or even seeds that are commercially sold as gherkins, are much more likely to be the common cucumber. They are simply meant to be harvested when the fruit is still very small and somewhat bumpy and immature.

Some cultivators have actually bred their common cucumber plants to produce fruit that stops growing at a smaller size, perfect for pickling.

This type of plant originates in India though it is grown worldwide now, using greenhouses to allow it to grow year-round, despite the climate.

What is a Pickle?

As mentioned previously, in North America the term “pickle” is used most often to refer to small pickled cucumbers.

When pickle is used as a verb, however, it can be applied to preserving any edible food item using brine, vinegar, or fermentation. A ‘pickle’ is usually a cucumber, but pickled foods are any that have undergone a pickling process.

People “pickle” or ferment all kinds of things these days using kits like this one on Amazon that make the process super simple.

A very simple way to answer this question is to say that cucumbers can be pickled, but not all cucumbers are pickles and not all pickled vegetables or fruits are cucumbers.

In North America, if you hear someone refer to pickles, there is a good chance that they’re referring to cucumbers that have been pickled, but there are quite a few variabilities to consider.

We’ve devoted an entire article to this exact question, cucumbers vs pickles.

What Are Pickles Made of?

Pickles, or more actually, pickled food, can be made from nearly any edible food product that is preserved in brine, vinegar, or left to carefully ferment naturally through Lacto-fermentation.

Globally, pickled cucumbers and sauerkraut or kimchi, varieties of pickled cabbage, are the most common pickled food.

You can pickle nearly any vegetable, however. Carrots, onions, beets, hot peppers, asparagus, and green beans are all incredibly popular as well.

You can also pickle fruits and even animal products. Pickled mangoes are a common feature in Indian meals, pickled eggs are very popular in Britain, and pickled meat is not overly unusual even in the USA.

Olives and capers can also be considered pickled, though they have a distinct brine flavor of their own.

Where Do Pickles Come From?

Pickling is one of the oldest methods of food preservation we’re aware of and it’s still very popular today, though mainly for the delicious flavor rather than necessity.

The earliest known reference to pickles, as in pickled cucumbers, occurred in ancient Mesopotamia. People from North Indian would bring their cucumbers to be pickled in the Tigris valley.

We hope this article has cleared up the differences between gherkins and pickles for you, in language and biology. We’d also like to invite you to take a look at these related questions, in case you have more queries about these foods.

Are Gherkins Good For You?

Cucumbers and other fruits and vegetables are certainly good for you, and there are many benefits to eating properly fermented foods like some pickles or gherkins.

The Lacto-fermentation process creates a probiotic food that nourishes the healthy bacteria in your gut, which is very healthy.

Unfortunately, not all gherkins or pickles are made using this type of fermentation process.

Especially if you buy them, they’re much more likely to be commercially pickled using a great deal of salt and sometimes sugar and other preservatives and added flavorings.

If you can find naturally fermented gherkins, they will have the most health benefits, followed by gherkins pickled in apple cider vinegar.

If you’re watching your sodium intake, check the nutritional data on your pickle jar to see if it fits within your health plan.

Some pickled foods like sauerkraut also use wine. So if this is against your personal ethics you’ll want to check the ingredients for this as well.

What Makes a Pickle Kosher?

Kosher is the term for a food that is permitted for consumption according to Jewish traditions and customs. Kosher pickles, however, have more to their story.

Pickling, as we know, is one of the most ancient forms of preserving food, but there are various ways to pickle.

When Jewish immigration to the USA first began in mass numbers during the late 1800s, Jewish immigrants brought with them a very specific way of pickling their cucumbers to get the perfect sour flavor.

While they did use Kosher salt, it is the specific recipe including dill, garlic, and other spices that are fermented carefully with the cucumbers that have become known as Kosher pickles. In most cases, they are also Kosher according to Jewish custom.

How Do You Pronounce ‘Gherkin’?

Gherkin is a Dutch or Germanic word, so it can be tricky to pronounce if you’ve never heard it used in casual conversation before. The “h” is silent, which is the most important thing to remember.

Phonetically, gherkin is pronounced “gur,” like a growl, and “kn,” similar to the ending sound of ‘chicken’. The “ih” sound is not heavily enunciated.

Why Are They Called Bread And Butter Pickles?

Though there is no definitive answer to this question, the most likely answer is that during the Great Depression after WW2, cucumbers were very cheap and easy to grow.

So, it was common to eat cucumber sandwiches, simply with bread, butter, and sliced cucumbers.

To preserve the cucumbers longer in wartime, they were often pickled. If vegetables were scarce, the resulting sandwich would become bread, butter, and pickles, hence bread and butter pickles.

Somewhere along the line, they were developed into a commercially produced line of sweet and sour sliced pickled cucumbers, which still make a surprisingly delicious sandwich when paired with simple bread and butter.

Another possible story is that the original manufacturers who trademarked the name, “bread and butter pickles”, would barter their sweet and sour pickled cucumbers in exchange for bread and butter staples.

Pickling food is one of the oldest methods of preserving food and nutrition, and as such has been around since ancient Mesopotamian societies.

It wasn’t unusual for travelers to bring pickled food with them as a way to stave off nutritional deficiencies like scurvy.

The H.J. Heinz Company, which we now know best for its ketchup, was the first to bring pickled cucumbers to the commercial market, in the early 19th century.

Up Next: Sugar Snap Peas Vs Edamame – What’s The Difference?

Do Sun-Dried Tomatoes Need To Be Refrigerated?