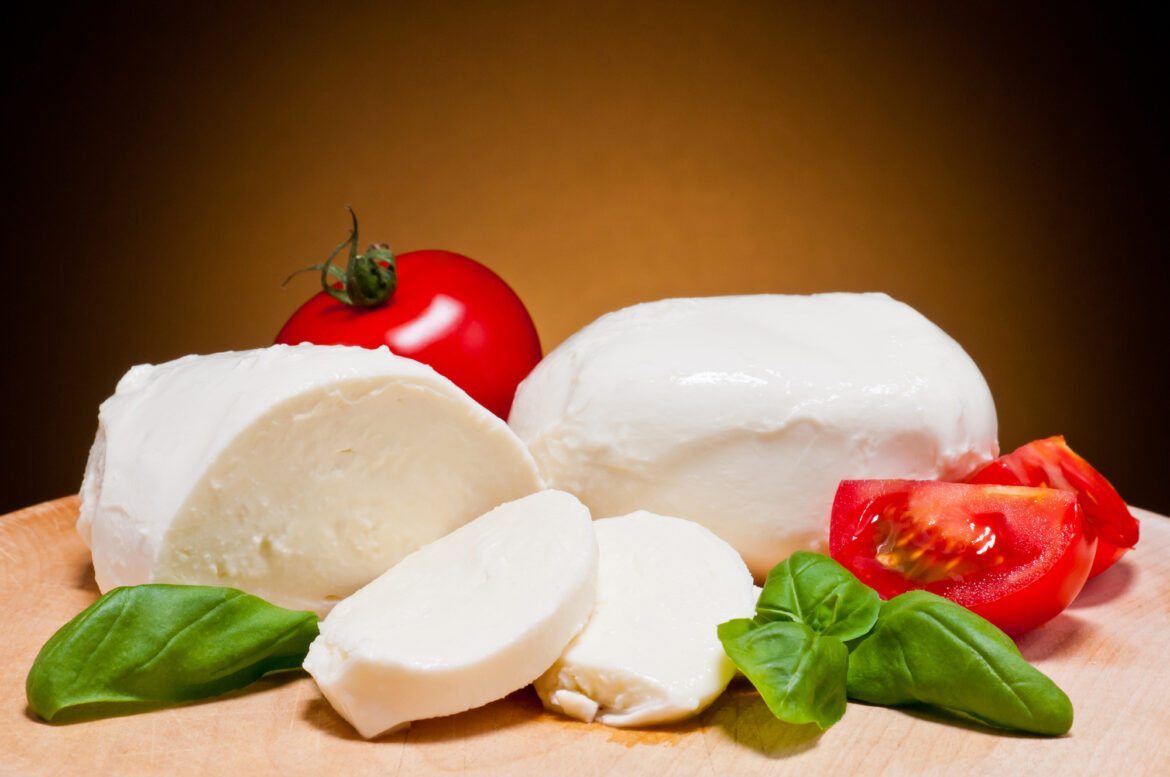 Monterey Jack and Mozzarella are two of the most popular cheeses as both are delicious and can be used in various ways and in different meals.

But while the two are similar in that they are very popular, they are actually quite different! Understanding how these two types of cheese differ from each other will help you know which one to use for different purposes.

Keep reading to find out the history of Monterey Jack and Mozzarella, some of their differences, and the best uses for either cheese.

All About Monterey Jack

Monterey Jack is a cheese that was first made in Monterey, California by Spanish missionaries — this is why it is popular in Spanish cuisine! It is an American semi-hard cheese that is made using pasteurized cow’s milk.

It is aged between 6-9 months, and due to the aging process, it is slightly similar to aged cheddar and shares the rich, nutty, and sharp notes that aged cheddar is also known to have.

Overall, Monterey Jack is a mildly flavored, buttery cheese that is usually pale yellow in color and has a semi-hard, supple texture to it. It does have offshoots with different production styles and flavors.

You can find variations of Monterey Jack, such as a version made with chili peppers and more spice called a Pepper Jack, and you might find some types of Monterey Jack combined with other ingredients to create a specialty cheese.

Please note that we will only be discussing the main form of Monterey Jack in this article, none of its variants, as we compare it to Mozzarella.

Mozzarella is a very popular cheese that was created in Italy. Particular methods of stretching and kneading are used to create mozzarella and get the specific texture and flavor that it is known for.

It is a soft, fresh cheese that can be made from either cow’s milk (either raw or pasteurized) or buffalo’s milk, but that is mostly only in certain regions of Italy.

Authentic mozzarella should be made with traditional methods, but the regulations in America are not as strict, so you can find mozzarella in different textures, some even being quite plasticky.

Differences Between Monterey Jack And Mozzarella

Honestly, it’s unlikely that these two types of cheese would be mistaken for each other since they are substantially different in appearance, texture, flavor, and more.

However, it still helps to go through the differences between the two to better understand how to use them!

Monterey Jack and Mozzarella have different textures, and this is even more true when the mozzarella is made using authentic techniques.

Monterey Jack is a semi-hard cheese that has a smooth and firm texture. It is not stringy at all and has a buttery, creamy finish.

When melted, Monterey Jack turns creamy and smooth, without graininess or greasiness.

Mozzarella melts beautifully and retains its taste and texture well when melted, not turning greasy or overly stringy.

It should be easy enough to identify both Mozzarella and Monterey Jack by their appearance alone.

Monterey Jack has a pale yellow color and a smooth, firm exterior. It is usually sold with a thin rind that is edible. You will likely find Monterey cheese sold in blocks, pre-shredded, in cubes, or in slices.

Mozzarella, on the other hand, is almost always a white color and is most often sold in rindless balls or braids, as this is how it is shaped when it is made. It is most commonly sold in brine or whey, either in a tub or vacuum sealed.

There are some low-moisture mozzarella variants that can be sold in blocks, cubes, slices, or pre-shredded, but these are not necessarily authentic mozzarella.

Monterey Jack is slightly mild, but it definitely has more flavor than Mozzarella does. It has a buttery flavor with notes similar to aged cheddar or even Colby cheese. How sharp Monterey Jack does depends on how long it has been aged.

Mozzarella is a mild-tasting cheese known to have a very fresh taste that captures the milky flavor very well. It is enjoyed as a light-flavored, light-aroma cheese that brings a creamy freshness to a meal without being overpowering.

Firmer Mozzarella cheese which is low-moisture will have less of a fresh, milky flavor, and sometimes it can be processed so much that it tastes like plastic. It is best to stay away from these types unless making dishes like pizza.

Monterey Jack and Mozzarella are used quite differently as well! These two kinds of cheese can be used in place of one another, but just keep in mind that mozzarella is a lot milder than Monterey Jack.

Monterey Jack, with its Spanish heritage, is commonly found in Spanish and Mexican cooking.

As Monterey Jack melts so well, it is a great cheese to use for quesadillas or nachos or other meals where it needs to melt without becoming greasy, grainy, or stringy. It is also great sliced and used on sandwiches or served on a platter.

Mozzarella cheese is very commonly used in Italian cuisine, and it can be used sliced and raw in a Caprese salad with fresh basil and tomatoes, melted on top of a pizza or pasta, or found inside of stuffed pasta.

If you are calorie counting, then it would be worth knowing the nutritional differences between Monterey Jack and Mozzarella.

When it comes to other nutritional values, such as protein, sodium, and cholesterol, the two are very similar.

Similarities Between Monterey Jack And Mozzarella

Now that we’ve gone through all the differences between Monterey Jack and Mozzarella, let’s cover the similarities between the two so we know when we can use one as a substitute for the other!

The two types of cheese are also considered to have a mild flavor, but Monterey Jack can have a stronger taste if it is left to age and mature for longer.

Both types of cheese melt really well, so they share similar culinary uses. Both can be used to make pizzas or even to top pasta, and are ideal for many meals where the cheese is melted, but where it should not become greasy or grainy.

The type of Mozzarella compared to Monterey Jack is important when comparing the two.

Monterey Jack and Mozzarella are two well-loved types of cheese that can be enjoyed on their own, on a sandwich, or melted in a meal.

Above, we have gone through the differences between the two types of cheese, as well as the similarities, so you can better understand both kinds of cheese and how they can be used in the best way.

Simply put, the main difference is that Monterey Jack is a semi-firm cheese with a sharper taste, whereas authentic Mozzarella is semi-soft with a milder flavor, and is often sold in brine or whey.

What is Monterey Jack cheese similar to?

If you do not have Monterey Jack at home but need it for a recipe, you could try to use Gouda, Havarti, Edam, Colby, Emmental, or Mozzarella cheese in its place.

The type of cheese you choose to use in its place will depend on what you were using it for in the first place, whether it needs a stronger flavor, whether it needs to be mild, or if it should be softer or firmer.

Can you use Monterey Jack on pizza?

Monterey Jack can be great to use on pizza — it melts well and still has a good flavor when it is melted, and it does not become greasy.

Can you use a blend of Monterey Jack and mozzarella?

If you want a delicious topping for a pizza or quesadilla, you could use a blend of Monterey Jack and Mozzarella cheese. The reason this would work is due to both melting very well, and having similar textures when melted.

Mozzarella is considered a healthy cheese option. It is lower in fat and sodium than other types of cheese and is also a good source of calcium and protein.

Cheese Vs Butter – The Actual Differences

Shrimp Skewers In The Oven