Home Foodsguy Provolone Vs Mozzarella – What’s The Difference?
FoodsguyThis vs That 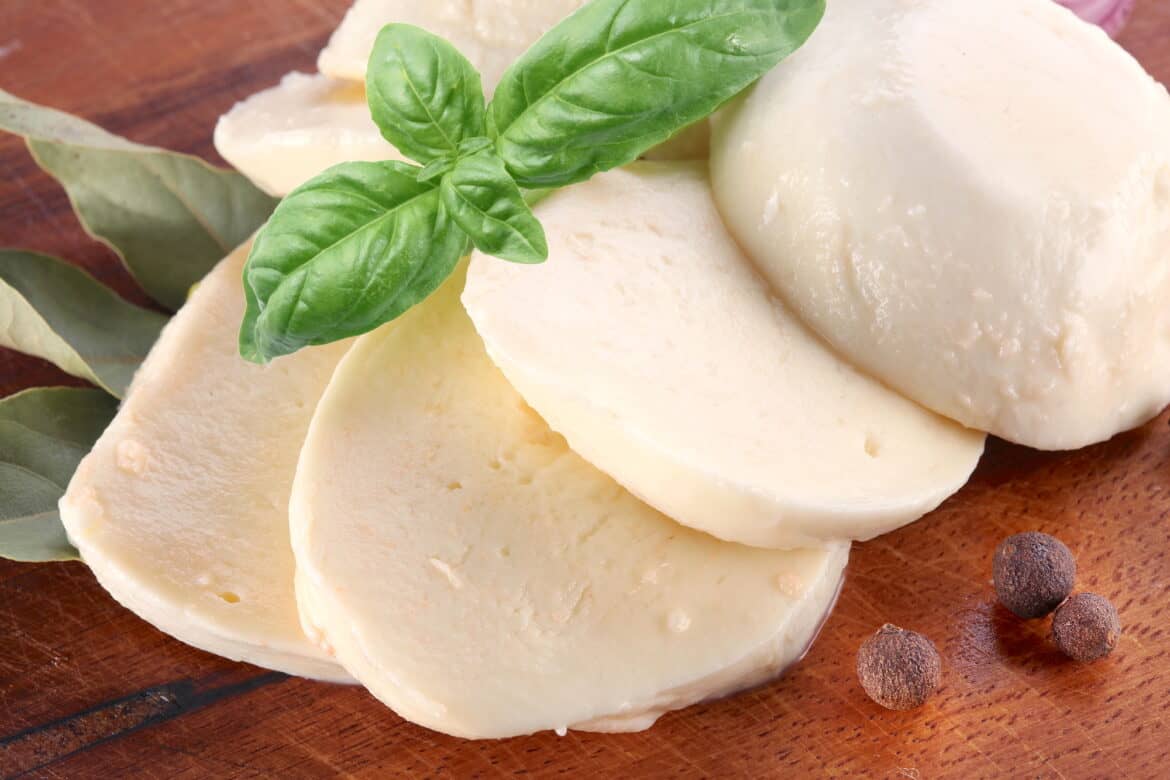 If you are an aspiring home cook, then knowledge about the different types of cheese is important.

Having a proper understanding of how specific ingredients work will surely come in handy as you explore a myriad of different recipes. Of course, this is often easier said than done.

For instance, a lot of people seem to confuse provolone and mozzarella cheese. That is why this guide seeks to answer the question:

Of course, there is more to it than that. These two types of cheese are among the most widely used varieties around. Knowing the particularities of what sets them apart will surely come in handy later on.

To do this, we’ll also be taking a closer look at both mozzarella and provolone to see how they are different. So, be sure to keep reading.

The confusion surrounding provolone and mozzarella is perfectly understandable. After all, both of these cheeses trace their origins to Italy, although they hail from different regions of the country.

At the same time, they are also classified as semi-soft cheeses. They also share a somewhat mild and buttery flavor. It is also worth noting that there are some similarities in their production process.

However, the subtle differences are what ultimately set them apart. To better understand how they are different, we must take a closer look at how each of them is made.

First, let us take at Provolone cheese. Known for its smooth and nutty flavor, it also has a hint of tanginess that is hard to ignore. This flavor profile makes it a popular choice for pizza recipes as well as pasta.

Take note that the quality of the Provolone Cheese is dependent on two major factors: the quality and amount of fat in the milk being used and the production process itself.

Here is the process of making provolone cheese:

These are the general principles that go into making provolone. However, you must also note that cheese-makers often make subtle variations to make their cheese unique.

Now, it is time that we take a look at Mozzarella Cheese. There is no denying that mozzarella is the more popular of the two.

It is among the most well-known and beloved cheese varieties out there, probably because of its sheer ubiquity in the culinary scene. In fact, it’s particularly delicious in our recipe for creamy mozzarella shrimp pasta!

You will probably notice how significantly simpler it is to make compared to provolone. You can even start making your own at home, if you’d like!

Here are the steps that go into making Mozzarella cheese:

There you have it. You can then consume the cheese once these steps are finished.

Mozzarella is easy to make and easy to find and goes well with so many dishes, but if you’re really looking into this topic because you’re looking for a substitute for mozzarella, we have another article for you.

By now, you have already probably noticed a couple of differences between the production process of these two kinds of cheese. Remember that all of these will also play a major role later on.

Mozzarella and Provolone are incredibly popular cheeses. However, you should know that there are significant differences between them that you shouldn’t ignore.

Again, as a home cook, it all comes down to knowing your ingredients. So, best read on as we break each of these differences down.

As clearly shown in the previous section, the main difference between these two kinds of cheese comes in the production process.

For instance, notice how provolone depends on fresh cow milk, while mozzarella requires you to ripen buffalo milk prematurely.

At the same time, you will probably have noticed that provolone is cured for at least 3 months before going into the market while Mozzarella is not aged at all. As stated in the previous section, mozzarella is typically eaten fresh.

Put simply, provolone is known as an aged cheese while mozzarella is not. Needless to say, many of the defining differences between these two kinds of cheese stem from this fact.

This is perhaps the most noticeable difference between the two kinds of cheese. Provolone has a sharper and tangier flavor compared to mozzarella’s mild, buttery, and almost milky flavor.

Needless to say, provolone has the more complex flavor profile between the two, which is a direct effect of the aging and curing process.

Of course, this doesn’t necessarily give provolone the advantage over mozzarella. This is because some people find its flavors to be quite overwhelming at times.

If you have ever bought mozzarella from the grocery store, you will have probably noticed that it comes packaged in a brine solution.

This helps the cheese retain its moisture and keep it fresh. Fresh cheeses like mozzarella don’t have a very long shelf life and must be consumed quickly to prevent them from spoiling.

On the other hand, provolone can be stored for quite a while. 2 -3 weeks, to be exact. Meanwhile, real pure mozzarella cheese can only last for as long as five days in the refrigerator.

Another noticeable difference between these two kinds of cheese is their nutritional content. Presented below is a table comparing provolone and mozzarella from a nutritional standpoint.

The difference between the two is fairly obvious once you examine their nutritional content.

If you are following a specific diet, then this chart will surely come in handy, as it tells you everything you need to know about these two kinds of cheese.

For instance, if you are on a high-protein diet, then you should go with provolone because of its higher protein content. However, if you are trying to cut down on your sodium intake, then you may want to opt for mozzarella instead.

Up Next: Can You Freeze Provolone Cheese?