Home Foodsguy European Bacon Vs American Bacon – What’s The Difference?
FoodsguyThis vs That 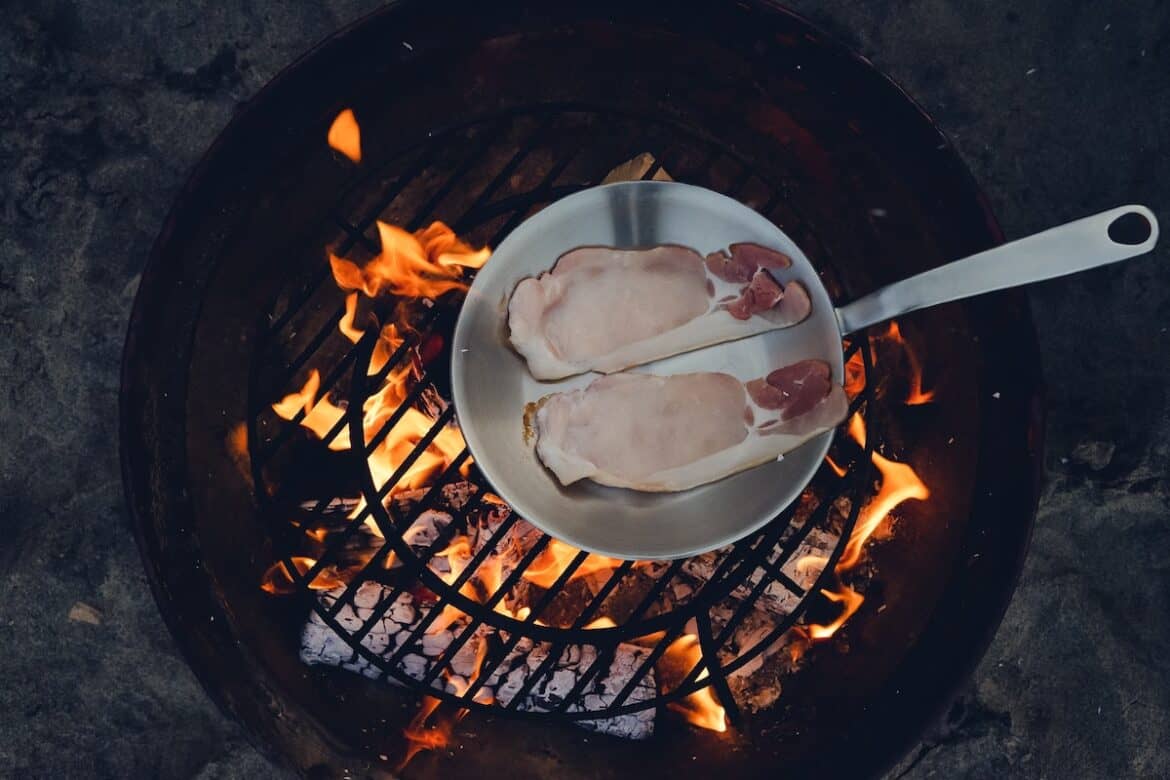 Breakfast really isn’t breakfast without crispy, streaky bacon. It finishes off just about any breakfast perfectly, and who doesn’t love the taste of bacon?

However, not all bacon is the same, and if you have ever had a full English breakfast, you might notice that the bacon served is different from the crispy, streaky type you are used to.

There is a definite difference between European bacon and the bacon we are used to, both in taste and looks. Keep reading to find out more about these differences, and why the two are so different!

American bacon is what we are used to, and is exactly how we expect our bacon to be cooked! Crispy and salty, bacon should not be soft or too thick!

The crispy and streaky bacon that we enjoy for breakfast (or just about any other time of day) comes from the belly of the pig. This area of the pig is layered with fat and meat, which gives the bacon the streaks of meat and fat.

Pork belly isn’t very thick, only an inch or two so, but is wide and long, so when sliced, it results in long, thin strips of bacon. This bacon is mostly sold raw and isn’t cooked before being packaged.

Streaky bacon is almost always cured before packaging, either with hickory or Applewood, which gives the pork belly bacon a richer, smokier flavor.

If this bacon is sliced thin enough, you can get it really nice and crispy. With the high-fat content found in pork belly, the fat melts away as you cook it, leaving the meat left behind juicy and full of flavor, and hopefully crispy!

There are a few ways you can cook streaky bacon, either frying it in the pan, cooking it in the oven, or in the microwave.

In order to get the crispiest bacon possible, it is best to fry the bacon in a pan. To do this, set a pan on medium-high heat and place the bacon into the pan, cooking them for around 2-3 minutes per side or until crispy.

You can take the bacon off when you feel it is crispy enough for your liking, which gives you control to cook the bacon exactly how you prefer it.

Cooking in the fat and oil is the best way to achieve proper crispy and streaky bacon which is full of flavor, and it is wonderfully quick too!

European bacon is not always as satisfying as the crispy, streaky bacon that we are used to.

It is made from the loin of a pig, and this means it is mostly meat, with a thin strip of fat on the top. It is much leaner than the American version of bacon.

While the cut is from the loin, some of it does contain some pork belly too, which helps to give the bacon flavor and a small percentage of fat.

European bacon is cut from the same area of the pig, which is lean, that pork tenderloin or loin roast is cut from. It is just sliced in a different way and then cured before being packaged.

This is often referred to as back shoulder bacon.

There are three ways to cook European bacon, you can cook it in a frying pan, in the oven, or in the microwave.

To cook it in a frying pan, you simply need to oil the pan, heat it on high, and place the rashers in the pan, for 1 minute on each side and remove when cooked.

For the oven, place the rashes onto a baking pan that has been oiled, and cook under the heating element for 1 minute on each side. This will give the bacon crispy brown edges, but it won’t dry out the pink meat.

If you want a quick and easy solution, you could cook the bacon in the microwave. Place the rashes on a plate and cover them with a paper towel. Microwave for 30 seconds on high and it should be cooked.

If not, repeat this until the bacon is cooked properly and is hot and ready to eat.

What Is Canadian Bacon?

Another type of bacon to consider is Canadian bacon. This is made from the leaner part of the pig, which contains less fat, usually the loin.

This part is found behind the pig’s shoulder, which runs down to just before the leg. It is a tender piece of meat and produces a good piece of bacon with a moderate fat content.

While we know this to be Canadian bacon, around the world it is referred to as back bacon, as it comes from the back of the big. This bacon looks very similar to ham, being sold in round slices with very little fat around the edges.

Canadian bacon is usually smoked and cured before being packaged and served.

Streaky bacon isn’t often unsmoked, but you can find some packs that are. However, this is often referred to as “salt pork” if it is not smoked.

European bacon comes in either smoked or unsmoked, with either being as popular as the other.

Smoked bacon is made when pork joints are hung in a closed chamber, hanging over smoking wood chips. Different wood chips are used to give the bacon different smoked flavors, such as hickory-smoked bacon.

Unsmoked bacon is referred to as green bacon in Europe, mostly in the United Kingdom, and this is often not cooked as much as what Americans are used to.

Some people love the smoky flavor that smoked bacon has, but others prefer just the taste of the pork on its own!

Pancetta, while it should be referred to as European bacon, as it is from Italy, is very different from European bacon described above.

Pancetta is made from the pork belly and is sliced very thin. This is cured before being served and does not have to be cooked.

While mostly sliced, pancetta can also be cubed and then cured, and fried up to be crispy. It is a popular dish for antipasti, and also works well as a topping on pizza to give it a punch of flavor!

There are quite a few differences between our streaky American bacon, and European bacon, commonly found in the United Kingdom.

Streaky American bacon is cut from the pork belly, which gives it a beautiful marbling and even fat-to-meat ratio, which allows the bacon to cook up beautifully crispy.

European bacon on the other hand is cut from the pork loin, with some pork belly, which means it is much leaner and meatier than streaky bacon.

It does have a line of fat along the edge, but the rasher of bacon will not crisp up much at all.

Both types of bacon are unique in their own way, and while you might have a preference for what you prefer, we can all agree that breakfast isn’t breakfast without some bacon!

Now that we’ve gone over the major differences between European and American bacon, let’s take a look at a few related questions on the subject!

What is British bacon called in America?

British bacon is called rashers in America. It is chewier and thicker, closer in likeness to a slice of grilled deli meat.

What is back bacon called in America?

Back bacon is often referred to as Canadian bacon in America. It has a more ham-like taste and flavor than most other types of bacon, as it is leaner and cut in a round shape.

In America, bacon really only refers to the popular streaky pork belly bacon.

Can you eat back bacon raw?

You should not eat back bacon raw. Even though the bacon may have been smoked and cured, there is a chance that you could contract a foodborne illness from the bacon if it is not cooked, and this can make you quite sick.

Ham is similar to bacon, cut from the hind leg of a pig, but it is cured and sliced and can be eaten raw.

If cooked, the ham will not taste exactly the same as bacon, as it is from a different cut of the pig and does not have the same fat content.

Up Next: Every Burger Bun Type