How Long Does Bacon Grease Last? 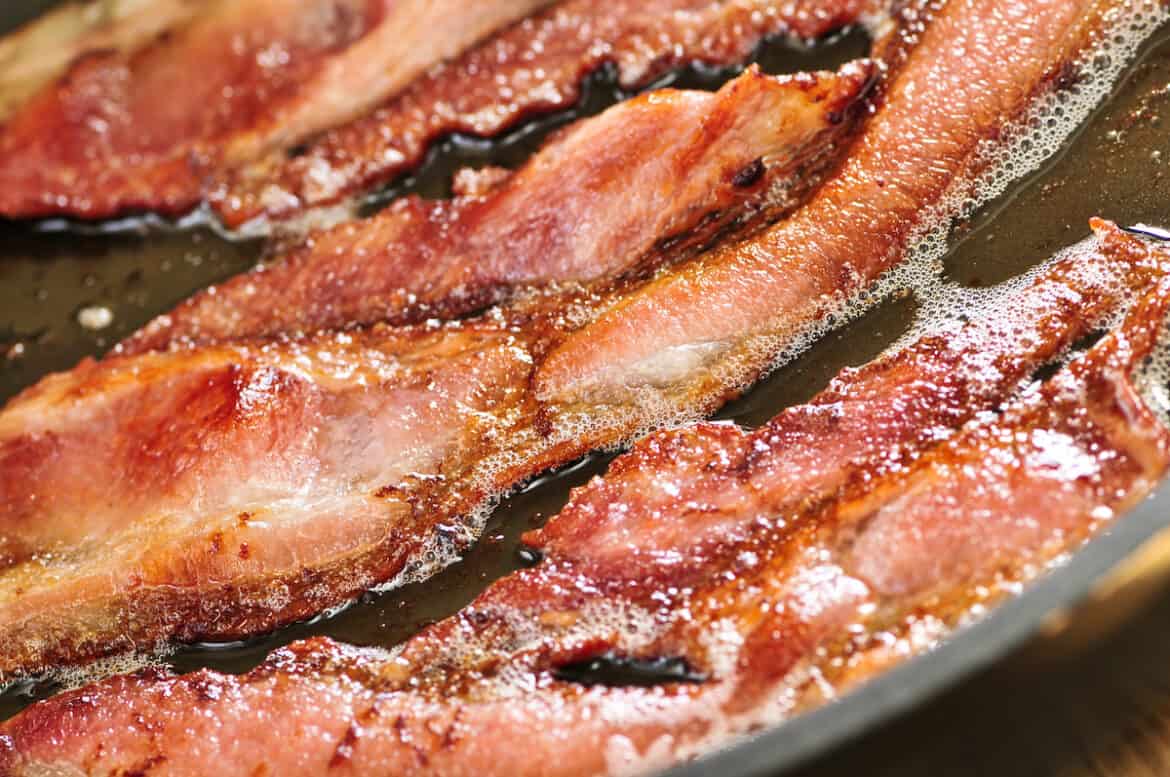 Bacon grease is the unsung hero when it comes to cooking fats and oils.

Despite being a go-to ingredient of chefs of yester-year, it isn’t as widely used today. This is mostly because people don’t know how to best make it, let alone store it!

But even if you’re in the habit of saving your bacon grease, you may be wondering about it’s shelf-life.

A lot of people assume that because it is an unprocessed animal-based product, it only lasts a day or two. This, however, could not be further from the truth.

In this article, we will have a look at everything bacon grease! From what it is, how to make it, how it is used, but most importantly, how to store it and how long you have to make delicious use of it.

What Is Bacon Grease?

Bacon grease, or bacon fat as many people know it, is the fat that is released from bacon when it is cooked in a specific way.

This method is called rendering and is the process of cooking fat to help it release fatty liquids and create a more useful and usable ingredient.

When bacon grease is heated, it is a semi-clear (almost cloudy or milky) fatty liquid. When its temperature lowers, the liquid solidifies, producing a semi-hard, solid white mass of fat. Bacon grease acts very similar to coconut oil in this way.

This fat not only acts as a lubricant for your food but simultaneously adds a ton of flavor. The best way to describe it would be a combination of perfectly balanced umami notes, with obvious saltiness and smoky hues coming through.

Bacon grease has very similar cooking characteristics as lard (another fat obtained from rendering pork meat). It has a smoke point of around 374°F (190°C). This isn’t very high, and we would definitely not recommend deep-frying food in it, but it is also not low.

Where Do You Get Bacon Grease?

This is a question that we get very often. Bacon grease is mostly made at home when you make bacon, however, recently we have seen more and more stores stock up on this product.

As always, we highly recommend making your own, and with bacon grease, you already are every time you cook bacon; it is simply a matter of pouring it into a jar and saving it for later use!

We also love the fact that bacon grease is an unprocessed fat making it much more natural (and healthy) compared to processed fats and oils like margarine and seed oil blends.

There are a couple of ways to cook the bacon for the best results. When you are cooking the bacon on very high heat, the fat released often burns and eventually evaporates, leaving you with a teaspoon or two of grease.

You want to cook your bacon on a low and slow heat to get the most grease possible that is clear and unburnt.

“Make” Your Own Bacon Grease

Although you can technically purchase bacon grease, there’s really no reason to most of the time. If you’re going to make bacon at home once in a while anyway, you can harvest that bacon-y goodness and save it for a rainy day!

Here’s how to get bacon grease from cooking bacon as normal in a pan:

If you cook your bacon in an oven (hey, we get it; sometimes you’re too busy to monitor breakfast in the morning), you can still save your bacon grease for later!

How to get bacon grease from oven-cooking:

If your grease has solidified (meaning it has cooled too much), simply reheat it before placing it in a jar. Transferring it to the container when it is in its liquid form will use much less space than filling a container with solid chunks.

Glass jars or containers (like a mason jar) work the best because it can be sterilized and doesn’t hold any stains or odors from previous foods.

This will help extend the shelf life of your bacon grease, compared to storing it in plastic or metal containers. Glass won’t affect the fat in any way!

How Long Does Bacon Grease Last?

If bacon grease is stored using the correct methods, without impurities and without any light or temperature changes, it has the potential to last long; you will most likely use one batch before it expires.

The exact expiration date for bacon grease is extremely difficult to determine due to a wide variety of factors that affects it. These are only estimates and you should always check your grease for signs of spoilage before using it.

Store-bought bacon grease will last around the same time unless it has been processed, in which case follow the “use-by” or expiration date printed on the package.

In general, we would say bacon grease lasts 2-4 weeks at room temperature and 6-12 months in the refrigerator.

We’ll explain how to store bacon grease properly using each method below, so keep reading to make sure your delicious ingredient is stored well enough to actually last this long!

How to Tell If Bacon Grease is Rancid

Because bacon grease is an animal product, you should never risk consuming rancid or even suspected spoiled products.

The second very noticeable change is the color. It will turn from its milky white to a yellowish, and sometimes even brown color.

Other signs of spoiled bacon grease are changes in its texture. The bacon grease sometimes becomes crumbly, moldy, or watery. Which one exactly depends on the bacteria present in the grease.

This is the reason it is important to strain your grease and remove any solid particles if you plan on storing it for a long time. These pieces can introduce bacteria, causing rapid spoilage.

If your bacon grease has reached its estimated expiration date, just don’t risk consuming it. Expired animal products can cause serious food poisoning, even death in extreme cases.

If you suspect the bacon grease being spoiled, rather throw it out. It doesn’t cost much to make as it is a by-product, and it’s always better to be safe than sorry.

How To Store Bacon Grease

Once you have rendered the bacon and placed your liquid fat into glass jars, you have to allow the fat to cool completely, uncovered (meaning no jar lids and no plastic lids) before even considering storage.

When storing warm foods that are sealed, it creates an optimum environment for harmful bacteria to thrive and cause the food item to spoil, which can lead to serious food poisoning.

As with all foods, the biggest enemies are light, air, and moisture.

No matter which storage method you choose, make sure the container stays away from bright, direct light, air (so it should always stay sealed), and moisture (which can happen due to condensation when storing in hot areas).

Storing Bacon Grease in the Refrigerator

You can store your bacon grease quickly and easily by sticking it in the fridge. All you need to do is take a few steps to ensure it’s stored safely:

Storing Bacon Grease in the Freezer

You can also freeze your bacon grease if you don’t expect to be cooking with it any time soon.

Here’s how to do it:

Can Bacon Grease Be Stored at Room Temperature?

Bacon grease can be stored at room temperature, but keep in mind the shelf-life will be considerably shorter compared to storing it in the fridge.

The storing method is exactly the same, but rather than placing it in the refrigerator, you can place it in the pantry or food cupboard.

Keep the container away from heat sources (so do not store it next to a microwave, oven, stove-top, or even next to the fridge). Keep it away from direct sunlight and light sources.

How to Use Bacon Grease

Bacon grease is an extremely versatile ingredient – just as versatile as any other cooking oil or fat.

It is mostly used to fry, brown, and cook foods like meats, vegetables, and even herbs and spices, but it can also be used in other cooking ways.

It’s great for grilling foods, quickly sautéing ingredients, or even shallow-frying items. You can also use it when roasting meats or vegetables, as it adds a wonderful smoky flavor.

Here are some of the more unique ways bacon grease is used in food:

What is the Difference Between Lard and Bacon Grease?

How Do You Thaw Frozen Bacon Grease?

You can either leave the bacon grease to defrost in the refrigerator (never at room temperature as the risk of bacterial growth is too high) for a few hours, or you can thaw it in cold water.

Cold water is much faster but requires some work. The water should be changed every 30 minutes or so with new cold water. Within 1-2 hours, the bacon grease is ready for use.

Can You Freeze Bacon Grease Twice?

Contrary to what we normally say about freezing things twice, bacon grease is one of the few exceptions. You can refreeze bacon grease, as long as it wasn’t microwaved or re-heated.

Up Next: Bacon-Wrapped Smokies Without Brown Sugar

How To Keep Fried Chicken Crispy

Veal Vs Lamb – What’s The Difference?