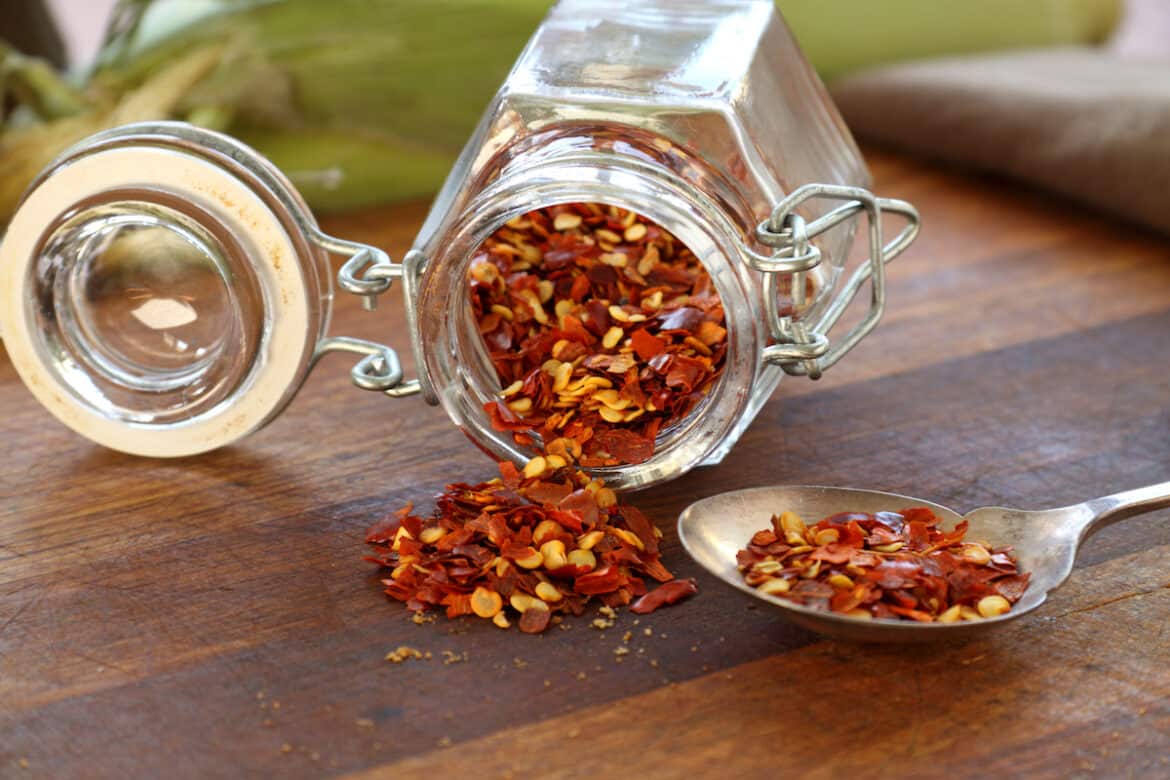 Those who love a little bit of heat and spice in their food would be looking for the best additions to their meals to give them that extra kick.

With so many different types of chilies and peppers, and a few of them tasting the same to most of us, finding the best spicy addition to a meal, and finding one which is the perfect spice level that you want, can be difficult.

There are two popular spice additions used in cooking, red pepper flakes, and chili flakes. The two look quite similar and are usually sold dried and in a glass spice jar.

To know which would be best for you to include in your next spicy dinner, keep reading to find out the characteristics of each, how they are different from each other, and which might be perfect for you!

Red pepper flakes and chili flakes are not the same thing.

The two might look very similar at first, but chili flakes are mostly one red color throughout, whereas red pepper flakes are different whites and reds, all from different pepper varieties.

So while you might be able to use them interchangeably, one won’t give the same taste and heat that the other would give to a meal, so finding out the differences between the two does help you figure out which is best for your tastes!

All About Red Pepper Flakes

Red pepper flakes hold a complex flavor, as they are made from a mixture of more than one pepper.

The complexity of flavors does go great in different meals and dishes, and the extra kick you get from red pepper flakes adds depth to a dish.

The heat level of red pepper flakes does vary. The spice level could be fairly mild, or it can be really quite hot.

You should also look for the number of seeds in the flakes, as the seeds are what give peppers most of their heat. The more seeds in a mix of red pepper flakes, the spicier it is likely to be.

Red pepper flakes can be a mix of whites and different reds, depending on the types of peppers used. The seeds also add to the varying color of the red pepper flakes.

Red pepper flakes can really be quite hot, and for those who are sensitive to heat, it might be way too much heat in a meal.

For those who love heat in their meals, red pepper flakes can be used to flavor many different meals, from sauces to pasta and pizza toppings.

Using red pepper flakes offers a good way to add heat to a dish without having to chop up chilies and a variety of peppers, which get messy quickly!

All About Chili Flakes

With only one type of pepper used to make chili flakes, you are really able to appreciate the flavor and taste of the chili, without losing it amongst different flavors.

Chili flakes can be considerably hot, and a little goes a long way when using them to make a meal, but the flavor that chili flakes give to a dish is worth the heat!

Chili flakes are not as hot as red pepper flakes might be, but this also depends on the type of chili used to make the chili flakes.

With a sweet note, chilies have a good balance between heat and flavor and are actually a great option for those who are just starting out with eating spicy food.

Although milder than red pepper flakes, chili flakes do still hold some heat, so go easy with how much you sprinkle on your food!

When chilies are processed to be dried and made into chili flakes, the seeds are removed from the chili.

Due to this, the color of chili flakes is fairly uniform and is most commonly red. The color can vary from a very dark red down to a lighter red, but this is dependent on the type of chili that is used.

Their versatility in the kitchen, and the fact that they can be cooked or eaten as is, makes them a favorite of many chefs and home cooks!

The four main differences between chili flakes and red pepper flakes are their make-up, their colors, their taste, and how they are used in the kitchen.

Understanding the differences between the two not only gives you more tools to work with in the kitchen, but it also allows you to better pair ingredients together when cooking, and ensure you have the right heat level for your different meals!

These are the main differences between red pepper flakes and chili flakes:

The biggest difference between red pepper flakes and chili flakes is what they are made of, which is where all the other differences come from after.

Red pepper flakes are made from a mixture of more than one type of pepper, which gives it more complexity.

When it comes to chili flakes, only one type of pepper is used.

This means that you will only get the taste and heat from one pepper when using this in your food, which in a way gives you the opportunity to enjoy the delicacy of the chili pepper.

These all have great flavors on their own, and don’t need to be combined with other peppers to be tasty!

We all associated peppers and chili with the color red and both red pepper flakes and chili flakes are mostly red, but there are some subtle differences between the two.

Chili flakes go through processing which removes all of the seeds from the pepper before they are turned into dried chili flakes. Because of this, chili flakes are usually red throughout without much of a change of color between.

However, the red does vary from dark, deep red to a lighter shade depending on the type of chili which has been used.

Red pepper flakes have a more varied color, as it is made from different types of peppers. There are some light reds, and then some darker ones too.

There are also some white colors from the seeds, which are left in when the peppers are turned into red pepper flakes.

There is quite a difference in taste between red pepper flakes and chili flakes. Chili flakes do have some heat to them, but this heat is dependent on which chili pepper was used to make the flakes.

Chilies do have some sweetness to them as well and have a milder flavor which does not alter the taste of food too much.

Chili flakes are recommended for those who are starting out with heat and don’t want anything that might be too hot to handle.

Red pepper flakes are known to be hotter than chili flakes, especially because there is an assortment of peppers used, ranging from mild to hot.

This is also exaggerated by the fact that the seeds are still in the peppers when they are processed and are not removed beforehand.

Seeds add quite a bit of heat and are where the main spiciness of the peppers comes from.

Always check the label of red pepper flakes before making a purchase just to see which peppers are included to determine what the heat level might be!

Chili flakes are great to add to almost any dishes, whether while cooking or to sprinkle on top of a meal for extra seasoning and flavor once it has been served.

Like chili flakes, red pepper flakes can be sprinkled over foods such as salad and pizza once it has been cooked, but it will change the dish quite a bit, as the heat won’t be as subtle or mild as what chili flakes are.

However, if you love all things spicy, this isn’t necessarily a bad thing!

How Do I Substitute Red Pepper Flakes And Chili Flakes?

Red pepper flakes and chili flakes work well as substitutes for each other, even though they do have a difference in taste and heat.

What Can I Use In Place Of Chili Flakes And Red Pepper Flakes?

If you have neither red pepper flakes nor chili flakes at home, then you would need to look for a substitute to use to add spice to your meal.

You can substitute red pepper flakes for chili flakes, or vice versa, but if you don’t have either, you could use cayenne powder, chili powder, dried chilies, chili paste, or hot sauce as substitutes.

This will all depend on the type of meal you are making, and how hot you want your food to be once it is cooked.

Dried chilies, cayenne powder, and chili powder are closest to the texture and consistency of chili flakes and red pepper flakes, but for saucier recipes, chili paste or hot sauce work well.

While they seem quite similar, there are a few differences between red pepper flakes and chili flakes that you should know.

The peppers used to make either are different, with red pepper flakes being made up of a variety of peppers, while chili flakes are made just with chili pepper. This gives them their own heat level, unique taste, and color too.

If you are looking for something with a subtle kick of heat, chili flakes are a good option. If you are wanting to add a decent amount of heat to your food, red pepper flakes will definitely do the trick!

Now that we’ve gone over the differences between red pepper flakes and chili flakes, let’s take a look at a few related questions on the subject!

Is there a difference between chili powder and chili flakes?

Chili powder can often include other ingredients, such as oregano, garlic powder, salt, and cumin, which gives it a fuller flavor.

Can I substitute paprika for red pepper flakes?

Up Next: European Bacon Vs American Bacon

Can You Freeze Leeks?