What Is Irish Bacon? – The Complete Guide 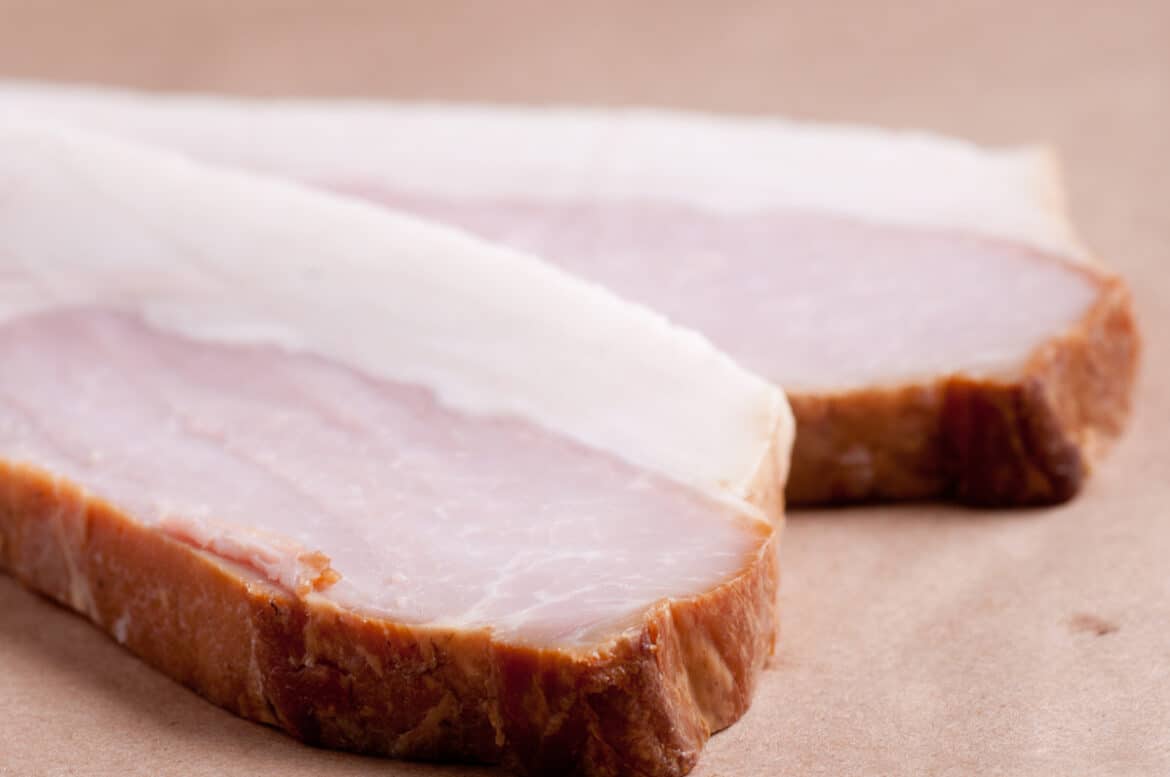 Bacon is one of the most popular meat cuts in America with an average American consuming around 18 pounds of bacon a year.

Made from a pig’s belly or back, bacon is most commonly enjoyed as a breakfast item or used as an ingredient in sandwiches, burgers, salads, soups, and pizzas.

There are many different varieties of bacon found across the globe differing in the way they are prepared, cured, and cut.

Some of the most popular types include American-style bacon, Canadian bacon, British bacon, and of course, Irish bacon.

What is Irish bacon? Irish bacon is a popular breakfast item in Ireland that is made from the back or shoulder of a pig. It is very different from the bacon typically used in America which comes from the pig’s belly.

Read on to find out more about Irish bacon, how it is made, and the best substitutes for the delicious meat cut!

How Is Irish Bacon Made?

Irish bacon, also called back bacon because of the part of the pig it comes from, is part of an elaborate Irish breakfast that includes eggs, blood pudding, white pudding, and bacon.

It is similar to Canadian bacon in the sense that both come from a pig’s back, are cured, and are about the same thickness. However, Irish bacon often has more fat and is usually cut into a round shape as opposed to thin strips.

It normally has a layer of fat surrounding it that elevates its flavor and gives it a distinctive taste. It is a great addition to sandwiches, omelets, frittatas, salads, and pasta.

As compared to American bacon, it is meatier, leaner, a little less fatty, and is typically cooked until done but not crispy.

Traditionally, Irish bacon is cured and then cooked, but removed from heat before it turns crispy. Curing it adds a unique taste to the meat and makes it more flavorful in addition to increasing its shelf-life.

It is important to note that not all Irish bacon will be cured. However, at times when it is cured, it is done using basic brine and tends to take a bit longer as compared to other types of bacon.

You may also smoke Irish bacon for a nice flavor, but that also depends on your preference and whether you like it or not.

How To Cure Irish Bacon

Here are step-by-step instructions on how to cure 5 pounds of Irish bacon:

How To Cook Irish Bacon

After the bacon is cured, you can cook it in a variety of ways that include using a skillet, baking it in the oven, or using a microwave.

Using a skillet is a classic method in which, after you take out the cured bacon from the fridge, you need to slice it and allow it to come to room temperature.

Lightly brown the bacon in the pan over medium heat using either butter or American bacon fat.

Alternatively, you can cook the bacon in the oven or microwave. An oven is a good option when you have big batches to prepare and a bit more time to spare.

Once ready, you can serve the delicious Irish bacon for breakfast coupled with some sunny-side-up eggs or omelets, make juicy bacon sandwiches or burgers, or use them as a topping on your favorite bacon pizza.

Irish bacon is also prepared by boiling it in water and is known as Irish boiling bacon, which is traditionally cured, netted, and smoked the traditional Irish way.

For times when you don’t have Irish bacon, what can you substitute it with? With so many different types of bacon and meat forms, it’s pretty easy to find good alternatives.

The best substitutes for Irish bacon are Canadian bacon, slices of ham, and pancetta. The first two are great options for replacing breakfast Irish bacon while pancetta is used more as a topping.

Similar to Irish bacon, Canadian bacon is also made from the loin cut (the center of the pig’s back) and is in fact referred to as back bacon in some parts of the world.

The meat is lean and juicy and, like Irish bacon, is served in a soft and juicy stage of cooking instead of allowing it to crisp up.

It is prepared in the same way as conventional bacon and is cured with a salting and smoking process. It is, however, a little sweeter than Irish bacon since it uses slightly more sugar.

Canadian bacon is a popular pizza topping in the US, especially on Hawaiian pizza, and is enjoyed over breakfast as well.

Smoked ham is another great substitute to get that delicious cured smokey bacon flavor without actually using bacon.

Although ham and bacon come from different parts of a pig and are cured and packaged differently, you can substitute one for the other, especially when using as a breakfast item.

Alternatively, you can also sometimes use pancetta in place of Irish bacon when the recipe calls for it and there is none available.

Pancetta is an Italian seasoned, salt-cured meat that is made from pork belly.

The two biggest differences between Irish bacon and pancetta are that they come from different parts of the pig and while bacon is smoked, pancetta is salt-cured and dried.

What the second difference means is that while bacon is still raw and needs to be cooked, pancetta can be enjoyed both cooked and uncooked because of the way it is prepared.

Despite that, it makes for a decent alternative for Irish bacon and can be crumbled over salads, rice, pasta, or soup, and used as a delicious pizza topping.

To make traditional Irish boiling bacon with cabbage, which is a quintessential St. Patrick’s Day dish, here’s what you need to do:

After covering all the important points related to Irish bacon in our detailed guide above, here are a few additional questions regarding the shelf-life of raw and cooked bacon and how to tell if it is bad!

How long does bacon last?

If you have ever prepared bacon at home, you will know that most types of bacon come with a ‘sell-by’ date written on the package.

This date gives a general idea about how long the bacon will be good for. The exact time depends on several factors such as the type of bacon, the storage method, and whether the package is opened or cooked.

Generally speaking, unopened bacon can last in the refrigerator for up to 2 weeks, and up to 8 months if kept frozen.

Bacon that has been opened but not cooked may last in the refrigerator for only about 1 week and up to 6 months in the freezer.

With reference to cooked bacon, it has a relatively shorter shelf-life and can last for only about 4-5 days in the refrigerator and up to 1 month in the freezer.

How long does home-cured bacon last?

Home-cured bacon will last in the refrigerator for 1-2 weeks, or even longer based on the curing mix and if it is vacuum-sealed.

However, if you don’t plan on using the cured bacon soon, seal it, slice it or leave it in a whole piece, and freeze it for up to 6 months or longer.

When you are ready to use it, transfer it to the refrigerator to defrost or put it in ice water.

How long can cooked bacon sit out of the refrigerator?

Since bacon belongs to the cured meat category, some say that it can be safely left out on the counter overnight without going bad.

Some even say that it can last out of the fridge for a couple of days as long as it isn’t contaminated. This, however, doesn’t apply to uncured bacon without nitrites.

Regardless of whether it is cured or not, it is best to either refrigerate or eat cooked bacon within 2 hours of it sitting outside.

Keep an eye on bacon left out at room temperature and if it starts to smell funny, develops a slimy layer on top, or develops mold, know that it has gone bad and discard it immediately.

How do you store bacon?

Proper storage may help not only maximize the shelf-life of bacon but also its quality. Therefore, as a general rule, be sure to always refrigerate or freeze the bacon directly after use.

Although uncooked and unopened bacon can be stored as-is, it is best to wrap it in aluminum foil to prevent freezer burn.

For uncooked bacon that has been opened, make sure to store it in an airtight container or wrap it in foil before placing it in the fridge or freezer to preserve maximum freshness.

Cooked bacon, on the other hand, should be separated into smaller portions and wrapped in paper towels prior to freezing.

How do you tell if bacon is bad?

Like other meat products in the market, bacon has a ‘sell-by’ date which gives an idea of how long it will last. Since it is not the expiration date, you may safely consume the bacon after the sell-by date has passed.

However, due to several factors, your bacon could go bad before its date and may not be safe to consume. This may be due to unfavorable storage conditions or the bad quality of meat.

In any case, you should never consume bacon that has gone bad. But how can you tell? The three simple ways include using your senses of sight, smell, and touch.

Start by looking at the bacon and, if it still has a natural pink color with white or yellow fatty deposits, it is safe to eat.

However, if it is a weird color such as brown, grey, or slightly green or blue, it has spoiled and needs to be discarded immediately.

Next, give the bacon a good whiff. If it smells sour, fishy, or unpleasant, these are signs of bacterial growth that make it smell nasty.

Lastly, touch the bacon to check its texture and softness. Remember, good bacon will always be soft and moist, but when it starts to go bad, it will feel slimy to the touch and will have a sticky shine on it.

If any of these signs start to show, it is best to discard the spoiled bacon immediately since it not only is unsafe and inedible but may contaminate your other food items as well.

When throwing it out, make sure to wrap it up in plastic so that the foul smell doesn’t spread elsewhere and into your kitchen.