Home Foodsguy Dumplings Vs Wontons — What’s The Difference?
FoodsguyThis vs That 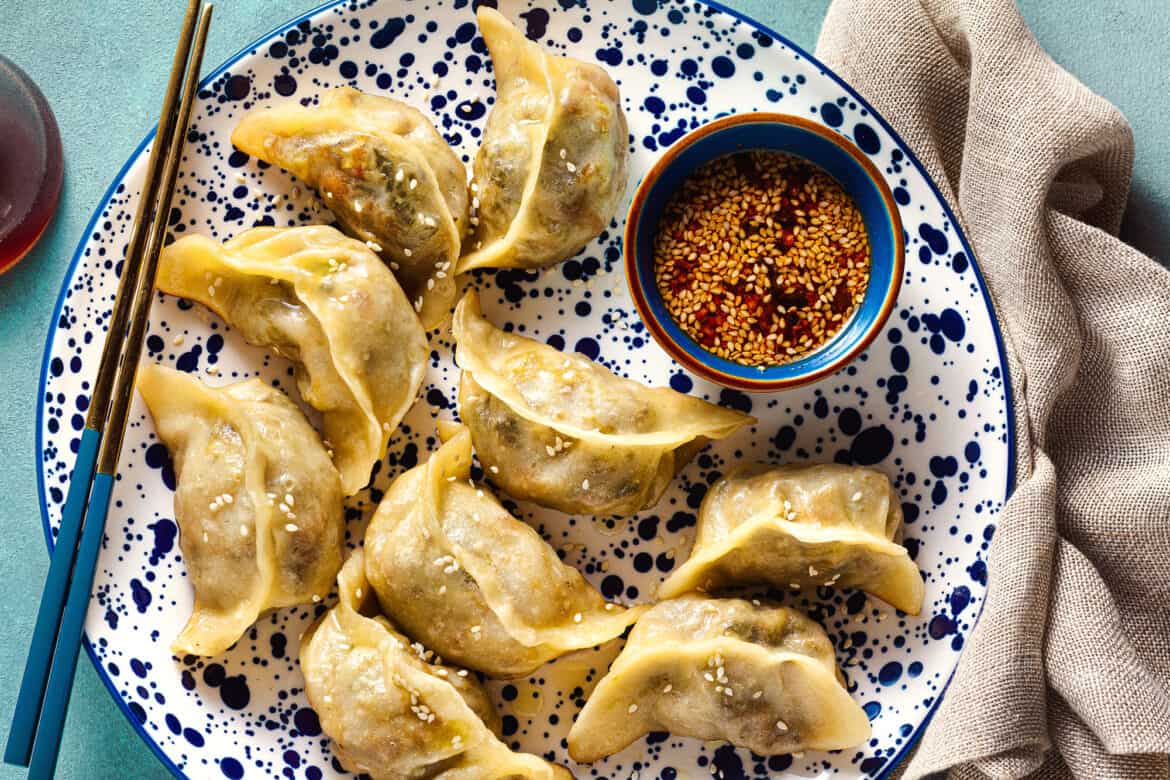 What’s the difference between dumplings and wontons? Dumplings are usually made of dough, which may or may not contain any filling. Wonton is a type of dumpling that always has a meat, seafood, or vegetable filling.

In this article, let’s take a closer look at these two iconic dishes.

Dumplings are a delicious and versatile food that is enjoyed by people all over the world.

While there are many different types of dumplings, and the exact origins of dumplings are unclear, most experts believe that they were invented by Zhang Zhongjing, a Chinese medical practitioner during the Eastern Han Dynasty.

According to legend, Zhang Zhongjing came up with the idea of using dough to enclose medicinal herbs after observing farmers wrapping their feet in cloth to protect them from the cold.

He reasoned that if wrappings could keep people’s feet warm, dough could also be used to deliver medicine directly to a patient’s body!

From this humble beginning, dumplings have become a staple of Chinese cuisine — and a cherished part of culinary traditions all over the globe!

Dumplings are made up of dough, which can be made from wheat flour, potato flour, or any other type of flour. The dough is usually mixed by hand. Once the dough is mixed, it is then formed into small balls using a spoon or your hands.

Dumplings can be plain dough, or they can have fillings such as meat, vegetables, or cheeses.

The dumplings can be cooked in any number of ways, but steaming or boiling are two of the most popular methods. After cooking, dumplings can be served with a variety of dipping sauces or simply eaten on their own.

Boiled and steamed dumplings are perfect for a quick meal or a hearty dinner. They cook quickly and can be easily customized to your liking.

You can add vegetables to the filling for a healthier option, or you can indulge in rich pork or beef dumpling.

Fried dumplings usually have heavier dough than steamed or boiled dumplings. This makes them more filling and satisfying, making them perfect as an appetizer before a meal.

When fried, the dumpling skin becomes crisp and golden brown, making them all the more delicious. The dough is also usually flavored with ginger and other spices, giving them a distinctive taste that pairs well with dipping sauces.

While the origins of wontons are unclear, they are believed to date back to the Tang Dynasty, when they were first mentioned in a cookbook.

Today, wontons are enjoyed by people all over the world and continue to be a staple of Chinese cuisine.

Wontons are made with a thin, square wrapper and can have a filling of meats, seafood, or vegetables. Since the construction of wontons is similar to dumplings, it’s actually considered a type of dumpling!

To make a wonton, the wrapper is placed flat in the palm of one’s hand, and a small amount of filling is placed in the center.

The wonton is then sealed by compressing the wrapper’s edges together with the fingers. They can be made ahead of time and frozen until they’re ready to be cooked.

Wontons are typically boiled or fried, with an optional dipping sauce. They can also be steamed. Wontons are not usually served with any dipping sauce because the filling is usually fully seasoned.

In addition to being a popular appetizer or main course, wontons can also be used in soups and other dishes. When served in soup, wontons are often garnished with green onions and fresh ginger.

Dumpling Vs Wontons — Similarities And Differences

Wontons are a type of dumpling, but not all dumplings are wontons! Let’s take a look at the main differences between the two and how to tell them apart.

There are a few types of dumplings with varying dough thicknesses. Plain dumplings are usually just plain dough. If the dumpling has a filling, the dough is usually thicker, providing more cushion for the filling.

Wonton is a type of dumpling that is made with a thin, square wrapper that is intended to be filled up with a filling of meat, seafood, or vegetables. As a result, wonton wrappers are typically lighter and more delicate than dumplings.

Dumpling dough is often shaped by hand, so the shape is usually circular. As a result, dumplings tend to be round, regardless of the variety.

Since wontons are usually made with a square wrapper, it’s up to you how you want to wrap the filling! You can make a tube, a triangle, a rectangle, or even a square using the wrapper, as long as it neatly wraps up the filling for cooking.

A nice way to remember this is that dumplings are always round, while wontons can be a few different shapes.

Both dumplings and wontons can have a filling of meat, seafood, or vegetables. However, there’s a slight difference in the recipe.

As we’ve mentioned, there are dumpling varieties that don’t have any filling at all, just dough — this type of dumpling is often served to complement soups or as a side dish.

Because of how dumplings are enjoyed (with a soup or with a dipping sauce), the fillings are only lightly seasoned. The lack of seasoning also complements the thick dough well.

On the other hand, wontons are heavier dishes that always have a filling of minced pork, vegetables, or seafood.

The stuffing is usually well-seasoned to create a rich flavor profile that can be enjoyed on its own without the need for a complementary sauce.

Dumplings are very plain since the fillings are only lightly seasoned — some are even just plain dough without any filling. Since dumplings are usually steamed or boiled, the resulting flavors are also milder.

As a result, dumplings are often accompanied by a dipping sauce, such as oyster sauce or soy sauce. They can also be added to soup and gain flavors from the soup itself.

On the other hand, wontons are usually fully flavored dishes. The fillings are often well seasoned, and since the wrapper is on the thinner side, the flavors will be quite satisfying even without an optional sauce.

Some varieties of wontons can also be fried, which enhances the texture of the wrapper and elevate the flavors of the filling — this is why they can be enjoyed without any complementary sauce.

There are wide varieties of dumplings. As long as it’s a dough, with or without filling, it’s a type of dumpling.

Though they originate from China, dumplings can be found across Asia (even Russia!), often with slight variations to suit local tastes.  This makes dumplings a much more diverse dish compared to wontons.

Many countries have their own version of a dumpling, from Xiao Long Bao (Shanghai dim sum), Mandu (Korean dumplings), or Gyoza (Japanese potstickers).

In Japan, for example, dumplings are commonly made with pork and cabbage and are oftentimes served with a dipping sauce.

In Korea, on the other hand, dumplings are typically made with beef or vegetables and are often served as part of a larger meal.

On the other hand, wontons only vary in the type of filling, the shape of the individual wontons, and the method of cooking.

Wontons do not have as wide varieties as dumplings, and they are mainly popular in Chinese cuisine.

Both dumplings and wontons are not difficult to make, but they can be very labor-intensive.

Because they are very labor intensive, Asian families usually gather all around a table to make and wrap dumplings together as a Lunar New Year ritual.

You will need to make the dough or wrapper, then cut and mix all the ingredients for the filling. Then, the filling needs to be filled in individual wrappers before being cooked.

If you would like to speed up the process, you can also buy store-bought wrappers for both dumplings and wontons. Make sure that you get the right variety since dumpling wrappers are usually thicker than wonton wrappers!

Dumplings and wontons are both traditional Chinese foods that are made from dough and typically have some kind of filling.

The main difference between the two is that a dumpling can be either filled or unfilled, while a wonton must have a filling.

Common fillings for dumplings include meat, vegetables, or seafood, while wontons are usually filled with chicken, shrimp, or pork.

Another difference is that dumplings are usually boiled or steamed, and the dish is always served with a dipping sauce.

Wontons are typically fried or added to soup, and this fully seasoned dish doesn’t need to be served with a sauce.

Whether you prefer your dumplings or wontons to be boiled, fried, or stuffed with chicken, shrimp, or pork, one thing is for sure: these delicious traditional Chinese dishes are sure to please!

What Happens When You Freeze Eggs In The Shell?