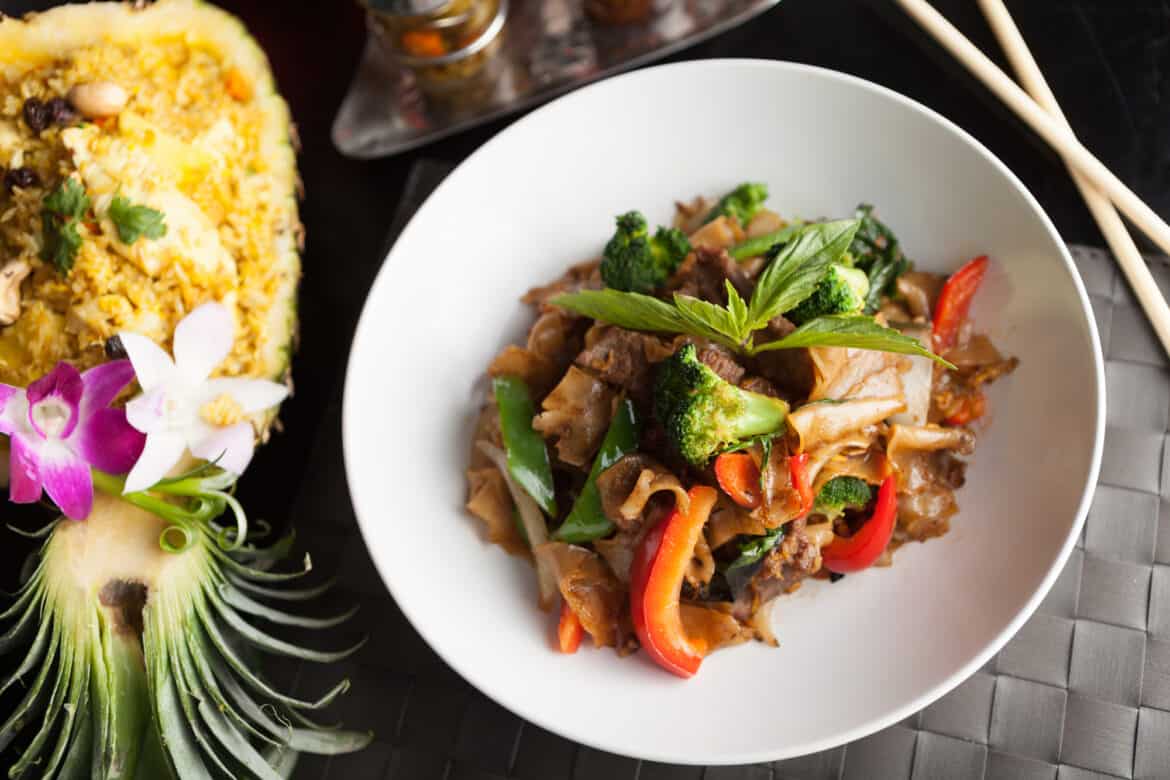 If you are a lover of Thai food, then you would likely have come across Drunken Noodles and Pad See Ew before, but you might have not tried them yet.

Both Drunken Noodles (also known as Pad Kee Mao) and Pad See Ew are two delicious Thai meals that may appear similar at first, but they are quite different when it comes to taste!

Read on to find out the differences between Drunken Noodles and Pad See Ew, to learn what their similarities are, and to find out which might be the right dish for you to try next time you get Thai!

What Are Drunken Noodles?

This noodle dish is a delicious blend between sweet and spicy, and a great balance of flavors!

The name Drunken Noodles comes from it being a popular dish served as street food for people who have spent the night partying, and want some food on the way home.

Drunken Noodles are made with a combination of vegetables and your chosen protein, as well as a sticky garlic sauce made from oyster sauce, fish sauce, and soy sauce.

This dish can be served with chicken, beef, seafood, or pork as a protein, or just with a blend of vegetables.

You can top Drunken Noodles with some onions, Thai basil, and even more chopped chilies if heat is your thing!

Due to the high amount of spice found in Drunken Noodles, it does not have too much sweetness.

What Is Pad See Ew?

Pad See Ew is another popular Thai dish that is full of flavor and fragrance. It isn’t spicy, but it has a punch of flavor that you are sure to love.

Pad See Ew is made with flat and wide noodles, which give the dish a chewy texture.

Soy sauce and molasses help to create a complex sauce, while mushrooms and Chinese broccoli help to bring freshness and bulk to the dish.

In most cases, Pad See Ew is finished off with some scrambled eggs. It is darker in color and has a balance of sweet and savory thanks to the molasses and soy sauce.

What Are The Differences Between Drunken Noodles And Pad See Ew?

Now that we know a bit more about the key components of each dish, let’s discuss some areas where they differ from each other.

Ingredients are what make a dish, but two dishes that have similar ingredients can taste widely different too!

Drunken Noodles and Pad See Ew can be made with different noodles and protein, but the base of each is kept similar.

Drunken Noodles are made with garlic, fresh chili, oyster sauce, fish sauce, soy sauce, fresh peppercorn, and Thai basil, which all release a strong flavor when cooked in oil and added to the rest of the ingredients.

The sauce for Pad See Ew, on the other hand, is made with a blend of garlic, molasses, and soy sauce, and the dish utilizes Chinese broccoli and mushrooms as a base. The addition of scrambled eggs also gives it some flavor.

While both are noodle dishes, they do have fairly unique appearances, so you should be able to tell them apart easily.

Firstly, Drunken Noodles contains quite a few different ingredients, such as vegetables and protein, and it is a fairly dark-colored dish.

Pad See Ew on the other hand, features wide, lighter-colored noodles and the addition of scrambled eggs.

When eating a new meal, taste is what would be most important! Even though they are both made with noodles and share some ingredients, Drunken Noodles and Pad See Ew have very unique tastes, both which should be appreciated.

Drunken Noodles have a much stronger flavor than Pad See Ew. The inclusion of a blend of sauces, as well as the use of chilies and Thai basil, makes it more flavorful and fragrant. The protein and vegetables added will also alter the taste.

Pad See Ew is a milder, sweeter-tasting dish that does not have any spice to it at all. The Chinese broccoli and mushrooms bring a fresh and earthy flavor to the noodle dish, and the soy sauce helps to balance out the sweetness.

We have gone over the ingredients used to make each dish, but the sauces for both deserve some special attention.

The sauce for Drunken Noodles is made primarily with oyster sauce, but it can often contain soy sauce and fish sauce to add to the flavor and fragrance. It is a savory sauce with quite a dark appearance.

Pad See Ew makes use of soy sauce, which can be combined with either molasses or sweet soy sauce, to give the dish its sweeter flavor.

This simple sauce is often accented with garlic — it is flavorful and tasty, but still mild enough for those who want to enjoy a simpler flavor.

Here’s a quick comparison chart for a more visual comparison of these two tasty dishes:

What Are The Similarities Between Drunken Noodles And Pad See Ew?

While knowing the differences between Drunken Noodles and Pad See Ew is one side of the story, it helps to know the similarities too!

The main similarity between Drunken Noodles and Pad See Ew is that they are both stir-fried noodle dishes that are typically served with vegetables and protein.

The types of noodles used for each can be different, but they are generally fairly similar. Both sauces can contain soy sauce and garlic, but the other ingredients do differ after this.

However, both dishes are served with a chosen protein, such as pork, beef, chicken or seafood, and chosen vegetables as well.

You can find both Drunken Noodles and Pad See Ew served at Thai restaurants, take-outs, or even as street food since they are both very popular dishes.

Should I Try Drunken Noodles Or Pad See Ew?

If you are still stuck on which stir-fried noodle dish to try, we can help you out!

If you are a fan of spicy food and/or noodle dishes with a rich, fragrant sauce, then Drunken Noodles would be the better option for you. You can choose your protein to enjoy with it, and savor the heat from the fresh chillies added in.

For when you aren’t a fan of heat and too much spice, Pad See Ew would be the better option. It has a milder, sweeter flavor than Drunken Noodles, and no heat, but this in no way means that it lacks taste and flavor.

If you are looking for a kick of heat and spice, then Drunken Noodles is the right dish for you! However, if you want something sweeter and milder with no heat, then try out Pad See Ew.

Both of these dishes can be served with various proteins and vegetables, but when trying them out, try to find authentic dishes, so you can really enjoy the blend of flavors that the traditional dishes have to offer.

What noodles are used for Drunken Noodles?

Drunken Noodles can be made with any type of noodle you prefer, but the most traditional noodle used to make Drunken Noodles is extra wide rice noodles. These hold the sauce beautifully and fill you up nicely.

What Is Pad Thai?

Pad Thai is another very popular Thai dish enjoyed around the world.

Pad Thai is usually made with thinner rice noodles, but any preferred noodle can be used. The base of a Pad Thai sauce is made from tamarind, and it is further flavored with lime juice, brown sugar, and crunchy peanuts.

This is a vibrant, flavorful dish with sweet, salty, and sour notes, which can be served with any protein you choose!

What Are Rice Noodles?

Can You Freeze JUST Egg?