Home Foodsguy Dried Dates Vs Fresh Dates – What’s The Difference?
FoodsguyThis vs That 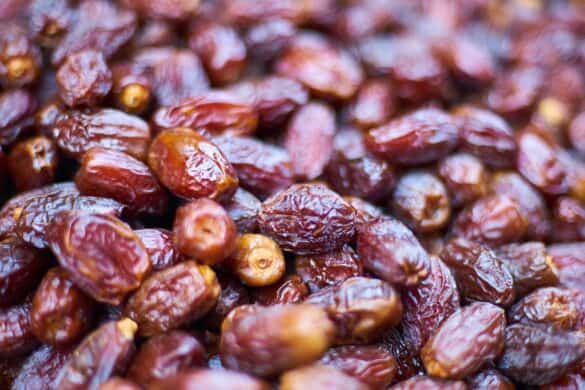 Dates are incredibly delicious fruits that are making a comeback! They are packed with sweetness and filled with nutrients, making them better treats compared to empty calorie snacks like candies!

But, what are the differences between dried dates and fresh dates? The biggest difference comes down to when they were harvested. Khalal dates are unripe dates that are hard and yellow. Rutab dates have developed to their ripest form, and dried dates are sun-dried for some time before being plucked.

Today, we will have an in-depth look at each type of type including their physical characteristics, their taste, texture, nutritional content, and even how the different types are used.

And finally, we will compare them side-by-side so that you can see exactly what each and every difference is.

Dates are delicious small fruits that are extremely sweet—in fact, they are one of the naturally sweetest fruits in the world! Its name can be directly translated in Greek as “fingers”, which refers to their shape.

There are tons of different date varieties around the world and when traveling, you will definitely find new ones along the way.

What we absolutely love about these fruits is that they are one of few that virtually every culture incorporates into their cuisine in one way or another.

For example, in Britain dates are chopped and mixed into traditional sticky toffee pudding or Christmas puddings.

In Southeast Spain, dates are wrapped in bacon and fried. Israel has a date syrup called silan, which is commonly used to flavor chicken or as a substitute for honey.

And in many Middle Eastern countries, it has become a staple ingredient that has a multitude of purposes.

Recently, dates have become the talk of the town again. And, because we now have such easy access to products from right across the globe as well as information about them, sometimes it can become very overwhelming.

The biggest question surrounding dates that we are often asked is what the differences are between fresh and dried dates – if there even is a difference? Well, let’s dive into that!

Fresh dates can be found in 2 forms. The way you have most likely come across isn’t actually fresh though. The types of fresh dates are separated according to how ripe they are.

First, you’ve got khalal dates, or unripe dates to make it easy. “Khalal” refers to the stage at which the dates are harvested (which is when they are unripe).

These dates are the freshest form of edible dates you can find, but they are also the most difficult to get your hands on.

If you aren’t in a date-growing region, chances are, you won’t be able to experience these. They are only harvested between August and a few days or weeks in September.

At this stage of harvesting, the dates have reached their maximum size and weight. At this stage, they have a relatively high moisture content of about 80%.

These dates are generally eaten as-is. They are extremely popular snacks when they are in season. You can find them sold on bunches in stores or at street vendors.

While you probably can use unripe dates in dishes, it isn’t very common and most people wait for the sweetness to develop first.

At this stage, the dates have reached full ripeness and have completely changed in texture, flavor, and color.

The dates are now a light brown color and have begun to shrivel as they lose moisture. Generally, ratub dates only have a moisture content between 50-70%.

As they ripen, they develop a soft and extremely juicy texture that almost melts in your mouth. And, their sweetness also increases significantly. You will definitely notice some caramel-like flavors.

These dates are pretty perishable but will last up to 2 years if kept frozen. You will generally be able to find these ripe dates in most areas of the world.

Rutab dates are very popular as a snack but are also used in virtually any way you can think of. They can be eaten on crackers, incorporated into stews, casseroles, curries, tagines, and even salads.

Or, you can use them as part of your desserts and even as a garnish. They will add both texture and sweetness.

Just remember to remove the pit of the date by slicing each fruit in half. The pit should easily slide out.

Dried dates are the “final” form that these fruits will develop into. This is also called the Tamr stage and is when dates are at their driest—these are the most commonly found form of dates across the globe.

Tamr dates only contain about 10% moisture and have a very dark brown color and shriveled skin.

The dates are kept on the date trees and dried using sunlight. You will also sometimes see them labeled as “sun-dried dates”.

These dates, thanks to their low moisture content, can last up to years without having to be preserved!

And, thanks to their concentrated sweetness, the sugars also help preserve them. Naturally, these dates aren’t as juicy as compared to the others, but they are much sweeter!

Dried dates make extremely popular snacks, especially in areas where fresh dates aren’t available or in season. They can be used in virtually the same ways Rutab dates are, but sometimes the dried dates will need to be re-hydrated first.

To re-hydrate them, you can simply soak them in some hot water for roughly 8-10 minutes. This will add moisture back into them, making them easier to handle and use. Again, remember to remove the pit inside.

Unfortunately, there isn’t a ton of research on the differences in nutrition between fresh dates and dried dates.

What we can say with confidence is that dates are highly nutritious and tasty fruits with many health benefits.

Dates contain protein, vitamins B6, and minerals including iron, magnesium, and potassium. Naturally, dates contain a high amount of sugar and therefore are very high in calories.

One averaged-sized date contains about 20 calories each!

Despite being high in sugar, it is also high in polyphenols and fiber. Polyphenols are a type of antioxidant that helps protect the body against inflammation.

Generally, dates are an excellent source of polyphenols compared to most vegetables and fruits.

And, when it comes to the fiber content, just a quarter cup of dates contains 12% of your daily fiber requirement.

Overall, it is a fantastic snack that is nutrient-dense and makes you feel full for long—or at the very least satisfies your sugar cravings!

First, we will look at the most noticeable differences between fresh dates and dried dates. Fresh dates are harvested in two stages despite being vastly different from each other. Both are classified and marketed as fresh because of their flavor.

Khalal dates (unripe dates) are yellow in color and have very thick and hard flesh. They have a high moisture content and are mildly sweet and very juicy.

Rutab dates (ripe dates) have a light brown color, are very juicy, and are extremely sweet. They have developed a softer texture and caramel-like flavor.

Tamr dates (dried dates) are completely different from fresh dates. They contain the least amount of moisture and aren’t juicy at all.

The loss in moisture has also made the sugars concentrate and produce an extremely sweet dried fruit. Dried dates are also very dark in color and generally, relatively hard in texture with thick leathery skin.

Unripe dates are generally only good as fresh snacks. They aren’t used in many other ways—at least that we can find. Ripe dates and dried dates, however, can be used in virtually the same ways.

Dried datess will just have to be re-hydrated in some cases, like when making a smoothie or incorporating into a dessert.

They are generally only in season in August. Rutab datess are more perishable but can still be frozen for up to two years. Tamr dates can be kept at room temperature for up to 2 years!

Dates are packed with protein, fiber, antioxidants, and contain some vitamins and minerals. It also, naturally, contains a ton of sugar that increases as the dates ripen.

The calorie count is quite high (about 20 calories per average sized-date). However, these at least aren’t empty calories like candies provide.

We wouldn’t say that you can substitute unripe (Khalal) dates with any of the others. Or even other fruits for that matter. But, you can swap out ripe dates and dried dates.

As we have mentioned before, you can simply re-hydrate the dried dates to put some moisture back into them. This will allow you to use them in exactly the same ways you would use ripe dates.

As for using ripe dates instead of dried, depending on how you need to use them, you don’t necessarily have to make any changes to them.

If you have to use the dates in a dried form, you can place the ripe dates inside the oven and at a low heat and leave them there for a couple of hours.

Up Next: How To Use Cornmeal For Pizza

How To Use Cornmeal For Pizza – The Ultimate Guide

I love dates. I dont eat too much because i thought its fattening. I have a better understanding now. Knowing now that it’s healthy, its a bonus. Thank you so much for sharing your knowledge