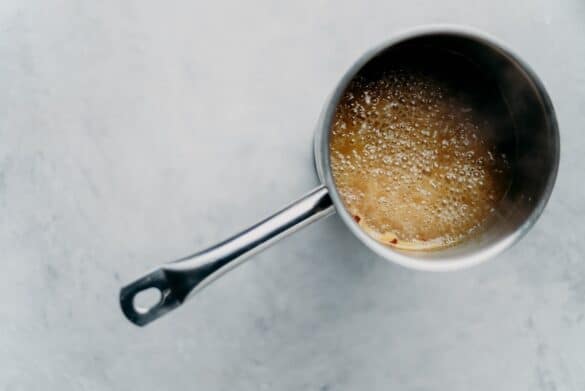 Vinegar is an extremely common and even more popular household ingredient. It is arguably as important as salt or sugar! Not only does it have a ton of functions in the kitchen, but it can also work as a cleaning agent.

However, there is a lot of speculation surrounding whether or not it is safe to boil vinegar.

Can you boil vinegar? In short, you can boil vinegar, but there are only certain times you should do so. Boiling vinegar releases fumes that can be toxic when done incorrectly. So, only boil vinegar in a well-ventilated area and do not inhale the fumes.

We will also look at some of the functions of vinegar in cooking and for general household use to help you better understand when and why it is or isn’t necessary.

Before diving deep into whether or not you can boil vinegar, we are first going to look at some ways vinegar is used. This will also help you understand whether you can (or even should consider) boiling any type of vinegar.

By understanding how it functions, you will also be able to better understand why it is crucial to have it in certain states.

Functions Of Vinegar In Cooking

For cooking, vinegar has a few functions.

First, and arguably the most obvious function, it helps add flavor to food. The acidity on its own help adds a tartness to the dish that very few ingredients can do.

This acidity also aids in balancing out flavors. For example, when you have added too much sugar in a salad dressing, the acidity from any type of vinegar will reduce it and create a more appetizing and well-balanced flavor profile.

It also naturally enhances the flavors of other ingredients. But, if you add too much to an ingredient or dish, it could overwhelm it.

And, unlike with other flavors, reducing or completely removing acidity and tartness is extremely difficult!

Vinegar is also a preserving ingredient. The high acidity of this liquid allows you to preserve meats, fruits, and vegetables.

But, the acidic flavor is imparted into the ingredient being preserved and creates an entirely new product. You can use vinegar as a base to infuse flavors into these pickled products as well.

This acidic liquid is also a tenderizing ingredient. As food lies inside vinegar, the acidity breaks the protein bonds.

Once these bonds are broken, they reform with other proteins and trap moisture inside. This makes the meat extra juicy and tender.

And finally, vinegar helps create certain chemical reactions in baking. For example, when paired with an alkaline (in the correct ratios of course), it can help create a leavening effect and cause the item to rise and become soft and airy.

You probably already know that vinegar has a few household uses as well.

For one, it is an excellent cleaning ingredient. You can use it to polish glasses, countertops, faucets, door handles, and even floors.

And, while it cleans it also disinfects! Acetic acid creates an extremely uninhabitable environment for harmful bacteria to grow in.

You can also use vinegar to help you break through the oiliness of dishes. This can help when washing dishes or even when you want to clean your dishwasher!

And the last function we would like to mention is that vinegar can act as a deodorizer.

If something went off in the fridge, you are washing a bin, or you simply want to remove any strong odors in a room, simply place a bowl of vinegar close by.

It absorbs the odor particles and completely neutralizes them!

Technically, you can boil vinegar, but that doesn’t necessarily mean that you should. Vinegar is an amazing ingredient that is used both in cooking and for many household reasons, but it can also be dangerous.

But before we just give you all the reasons why you should or shouldn’t do it, let us first explain what happens when you are heating and boiling vinegar. This will also help you understand later how exactly you can boil vinegar safely.

Vinegar consists of about 95% water and 5% acetic acid. As you know, when a liquid is heated, the water molecules start to evaporate.

Because vinegar is mainly water, it starts boiling at around 215°F, very close to that of water.

A fun little fact for you that could help you: the boiling point of vinegar increases if it contains any impurities or if the acetic acid content is above 6%.

Why You Shouldn’t Boil Vinegar

The main reason that you should never boil vinegar is because of the risks involved. It is actually quite a dangerous thing to do, especially when you don’t even realize the dangers or how to avoid them!

While the steam released from boiling vinegar is often used in Eastern medicine as a way to open up your sinuses and help clear up the flu, when done incorrectly it can actually be fatal. Yes, you read that right! Fatal!

When vinegar is boiling, the fumes it releases contain extremely high amounts of acetic acid, which is incredibly harmful in high concentrations.

We have heard many of our chef friends recall a time or two they have cleaned an oven with vinegar, or breathed in over a big pot of boiling pickling liquid.

In short, it takes your breath away, your eyes immediately start to burn, and some of them have even passed out!

The other reason you shouldn’t boil vinegar is that you are making its unique tartness disappear. Many people think by boiling vinegar they can either help concentrate the flavor and acidity or dilute it.

Neither of these will happen. Vinegar pretty much stays the same. If you have ever made a heated pickling liquid you will know that the acidity stays exactly the same. The only thing you are doing is taking away its flavor.

The same thing happens when you are deglazing a hot pan with vinegar. It instantly loses its tartness and basically becomes only bland acid.

The last reason that we feel is important to mention today, is that people often think when it is heated it will work better as a cleaning product.

Now, we definitely understand the logic behind this reasoning. Think about water; which cleans better, hot water or cold water? Obviously the hot water.

But vinegar isn’t water. It is an already acidic ingredient that can cut through dirt and fatty stains almost immediately.

When Can You Boil Vinegar?

Okay, so while the reasons mentioned above are pretty significant reasons not to boil vinegar, there are exceptions to these rules.

As you may or may not know, there are quite a few ways in which vinegar is heated in the kitchen. All of these techniques used, however, have very specific functions.

Vinegar can be heated (and even brought to a boil) when making pickling liquids. The same goes for when you are making vinegar-based marinades, dressings, or basting sauces.

This also allows you to ensure that all impurities have been destroyed, creating an inhospitable environment for bacterial growth, especially when making preserving liquids.

So, when using this technique for these reasons, just make sure that you always work in a well-ventilated area.

And, not to be too extreme, but wearing a mask and glasses won’t hurt. Trust us; a noseful of fumes is one of the worst kitchen injuries you can get.

Also, it is safe to bring a liquid to a boil when vinegar isn’t the main ingredient. For example, when you are making poached eggs, you add a little bit of vinegar to the water to help the formation of the egg.

This amount of vinegar is so diluted that it doesn’t release any vapors or lose its tartness.

The same goes for dressings, sauces, marinades, and basting sauces that mainly consists of other ingredients.

Now that we’ve gone over everything regarding boiling vinegar, let’s take a look at a few related questions on the subject?

Can boiling vinegar or boiled vinegar make you sick?

The only way boiling vinegar can harm you is with the fumes it releases which contains highly concentrated quantities of acetic acid.

Consuming or using vinegar that has been boiled will not harm you in any way once it has been cooled and no longer releases fumes.

Can you mix vinegar with boiling water?

You can definitely add vinegar to boiling water, as long as the water remains the majority of the liquid base. When the vinegar becomes the majority liquid, it will start releasing fumes that can be harmful.

Can you boil vinegar on the stove to remove odors?

By boiling vinegar on the stove, you are allowing it to absorb unwanted odors continuously. Just remember, work in a well-ventilated area and use an equal amount of water mixed with vinegar.

Can vinegar cause a metal pot to rust when using it?

When boiling vinegar inside a metal pot, just make sure not to heat it too high. Some metals, like aluminum, aren’t protected against the effects of vinegar.

It could possibly start burning through when the acid is too hot. However, most pots and pans today are non-reactive and should be safe to use.

Up Next: Dried Dates Vs Fresh Dates – What’s The Difference?

Can You Ferment Maple Syrup?