Home Cooking Tips Custard Vs Flan — What’s The Difference?
Cooking TipsFoodsguyThis vs That 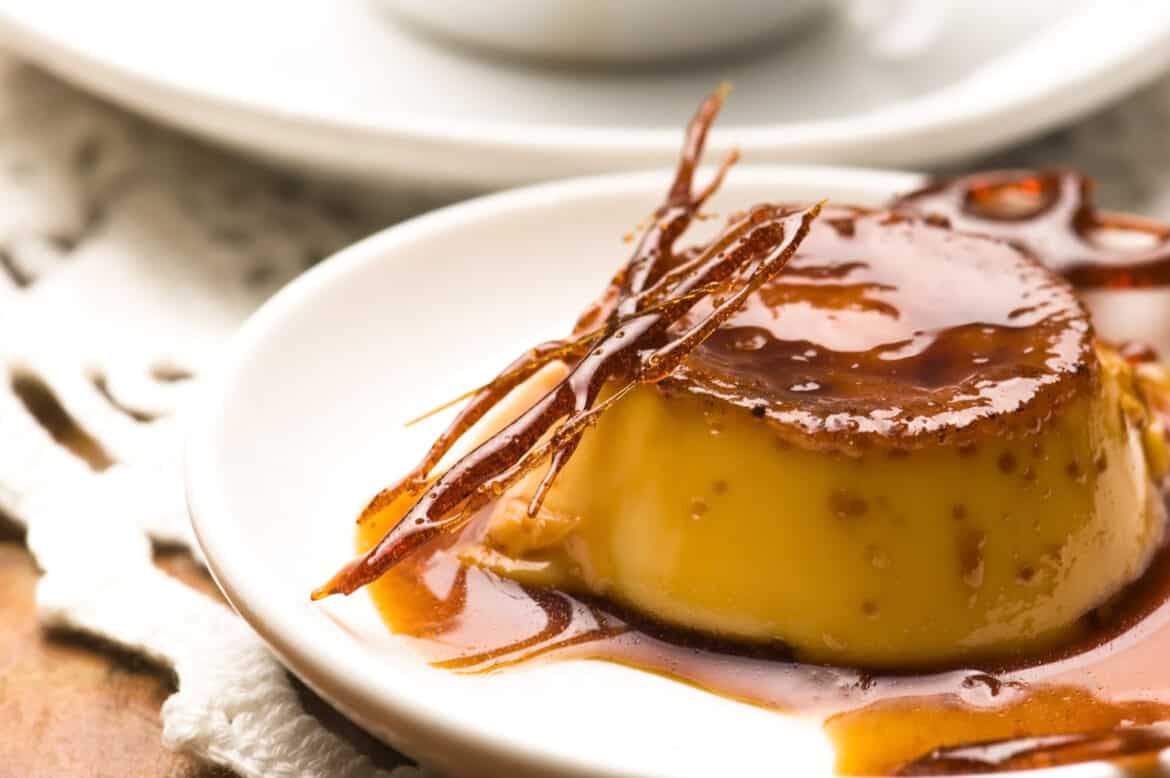 Custard and flan are two popular desserts that share a few similar qualities, but they are far from the same thing.

Both are made with similar ingredients and are both cooked desserts, but that is about where the similarities end!

To better understand these two desserts, and to build up your culinary knowledge, keep reading to find out the differences between them, and their unique properties.

Custard is a creamy, thick dessert that is primarily sweet, but it can be savory too.

It is made with a mix of eggs (or egg yolk), milk or cream, and additional flavorings and sweeteners.

Traditional custard is set with the eggs alone, but quick and easy recipes can contain some sort of starch, which not only helps the custard set but which makes it more resistant to heat.

The consistency of custard can vary between gel-like or pourable, and this usually depends on what the custard is being used for and how it is being served.

It also depends on whether the custard is cooked on a stovetop or baked in the oven.

Custard can be served on its own, usually warm, but it is also a popular filling for pastries and baked goods — it is popularly served alongside other warm desserts, too!

Flan is a dessert that is baked in the oven.

It is a custard-based dessert that is made from eggs, cream or milk, condensed milk, vanilla, and sometimes other flavorings.

As it is made from eggs, and as it needs to be baked in heat in the oven, flan is cooked in a water bath to gently set the dessert.

This custard dessert is topped with a caramel sauce that drips down the sides and adds a beautiful richness to the custard.

Flans most traditionally have a custardy, caramel flavor — it can also be flavored with other things such as orange, coffee, or coconut.

How Are Custard And Flan Different?

Custard and flan do share similar ingredients, but there are differences too.

Both custard and flan are made with a base of eggs, cream, or milk, and a type of sweetener, whether it is sugar or honey.

The ingredients used to make custard include milk or cream, egg or egg yolk, a sweetener, and sometimes a starch to help with setting.

The ingredients used to make flan include eggs, cream or milk, sweeteners, and certain flavorings such as vanilla, coffee, or coconut.

Flan also has a layer of caramel sauce poured over the top before serving.

Cooking custard on the stove requires it to be stirred continuously, to stop any curds from forming. This helps the custard be a more pourable consistency.

Flan is baked in the oven in a water bath, to help it cook evenly and set much like baked custard is cooked. This also helps to prevent the mixture from curdling.

Flan is often made in small dishes known as ramekins, which provide individual servings.

The caramel sugar topping for flan is made on the stove, and once it reaches the right consistency, it is poured into the mold that the custard mix is poured into afterward.

Custard and flan might have some similarities, but one of the main differences between them is how they are served.

Flan is usually served on its own — it is a whole dessert that does not necessarily need an accompaniment.

Flan is most commonly cooked in a ramekin or mold, with the caramel sauce on the bottom of the dish and the custard mixture on top.

When the flan has baked and set, this mold is turned upside down and placed on a dish, and when removed it leaves behind a set custard with a caramel sauce on top.

While the most popular flavor for flan is caramel, it can be served in different flavors, and this means that there can be some other ingredients served with the flan, such as orange pieces, chocolate pieces, or even coconut shavings.

Traditional custard, made with egg or egg yolks, whole milk or cream, and a sweetener, has a sweet and mild creamy flavor with subtle hints of egg.

Custard can also be savory, and savory custard will have less of a sweet flavor and be slightly more salted.

The beauty of custard is that it is a delicious dessert on its own, but it is still lightweight and subtle enough to be served with other pastries and desserts — it acts as the perfect accompaniment to a variety of meals, both sweet and savory.

Flan has a more complex flavor than custard because it is made with a few extra ingredients.

Flan has the same sweet, creamy, and mild flavor as custard, which is, but the flavor of the caramel sauce is rich with toasted sugar flavors.

The rich, caramel flavor from the topping of flan really compliments the custard base, and it can be compared in taste to be similar to a creme brulee.

Custard has a smooth, creamy, and rich texture — if made properly, it should be free from clumps and curdles, and it should not be too runnier or grainy.

This smooth, velvety texture is true for custard that has been baked and which is thick, and for when it is cooked on the stove and is a more pourable consistency. Whichever consistency your custard is, it should be smooth and velvety.

Flan should have a custard base that is creamy and smooth, when made properly, and it should have a delightfully silky texture that melts in your mouth.

The caramel sauce on the top of the flan should be a pourable consistency, but it should be smooth and stick to the flan.

Flan should not have lumps or clumps, and neither should the caramel sauce. This is why it should be baked in a water bath to prevent the eggs from creating curdles and ruining the smooth texture of the flan.

You will know that flan has been baked for long enough when it is firm to the touch, but not completely solid. You should be able to use a spoon to eat flan without having to press too hard.

Custard and flan are both delicious desserts made from similar ingredients, including egg, cream or milk, and a sweetener. However, the two are very different desserts, and are prepared and served differently to each other.

Custard is a thick and creamy dessert (usually pourable) that can be served alongside baked goods, enjoyed on its own (either hot or cold), or used to fill pastries. Custard can be cooked either on the stove or in the oven.

Flan is a dessert that is made with a custard-like base and topped with a rich caramel sauce, which is baked in a water bath in the oven until set.

Both desserts are velvety, creamy, and sweet, and are two great desserts to know how to make at home!

Now that we’ve learned all about flan and custard, plus their differences, here are some additional questions we thought you might have.

Are caramel custards and flan the same thing?

Caramel custards and flan are two very similar desserts, but the biggest difference between the two is their appearance.

Caramel custards have a larger custard base, whereas flan has a shortened custard base that is larger in diameter.

What is the difference between crème brulée and flan?

Crème brulée and flan are both made with a soft custard base, and both have a caramel topping.

The difference is that flan has a soft, pourable caramel layer, whereas crème brulée has a hard caramel layer on the top which is created by either broiling or torching the top sugar layer.

What can you eat custard with?

You can enjoy custard with so many different desserts! Some popular desserts which custard is served with include fruit crumble, apple pie, and fruit tarts.

The Difference Between Custard And Ice Cream

Does Tiramisu Have Nuts?