Home Foodsguy Custard Vs Bavarian Cream – What’s The Difference?
FoodsguyThis vs That 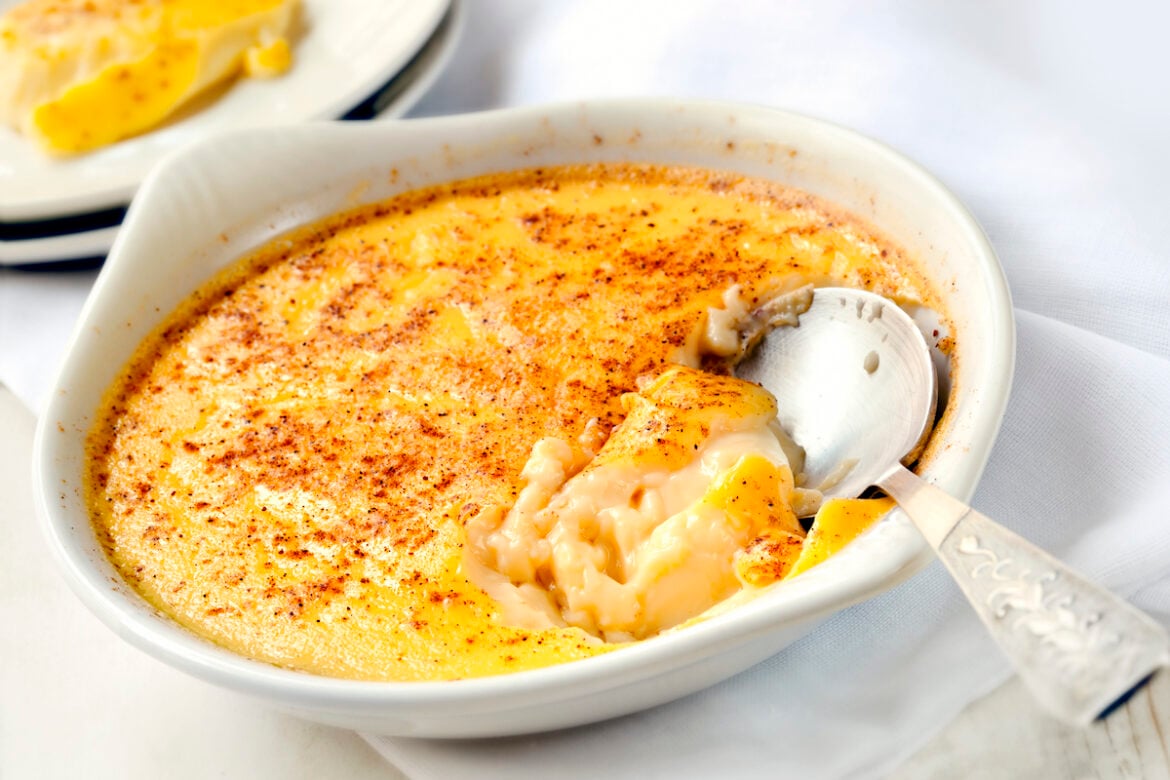 Custard and cream-filled desserts really just hit the spot when you are craving something smooth and creamy!

There are a multitude of different creams available in the dessert world, so knowing the difference between all the types can be difficult!

The differences also extend to how they taste and how they are served, so understanding more about each will help you pick which one is best to serve with a dessert!

Keep reading to find out all about custard and Bavarian cream, and the differences they have.

Custard is a dessert made by blending eggs with milk or cream. It is thick, rich, and creamy, and can either be sweet or savory. When served as a dessert, custard is sweetened with sugar or honey.

It is made with a mixture of egg, or egg yolks, milk or cream, vanilla essence, and then sweeteners, typically sugar.

A basic custard is thickened with eggs alone, but sometimes starch such as corn flour can be added to make thickening the mixture easier.

Custard is typically prepared over heat on the stovetop, where it is stirred and heated until it has been thickened enough. It can then be enjoyed warm or left to cool and kept in the fridge for a few days.

Custard can be enjoyed as a dessert on its own, or it can be served with cakes or other baked goods, either hot or cold.

What Is Bavarian Cream?

Bavarian cream is a deliciously rich dessert that is supposed to be served cool. It is typically served unmolded on a plate and is then topped with items such as fresh fruit.

Bavarian cream is made by blending whipped cream with yolk-only custard and leaving this to chill in the fridge until it sets.

Some Bavarian cream recipes call for gelatin to be used instead of whipped cream, to help the dessert set.

It can be served as a stand-alone dessert, garnished with fresh fruit and preserves, or it can be used as a filling in pastries and baked goods.

Bavarian cream is quite easy to make at home, especially if you have yolk-only custard prepared already.

It offers a lighter custard taste, but the added whipped cream makes it taste richer at the same time.

Now that you have a better understanding of what custard and Bavarian Cream are, you can take a look at the differences between the two!

The preparation between custard and Bavarian cream differs quite a bit. Custard is prepared over heat and needs to be stirred constantly until it thickens.

Once thickened, custard can then be enjoyed warm or it can be left to cool in the fridge.

Bavarian cream on the other hand requires the combination of a yolk-only custard made from egg yolks, milk, and sugar, to be combined with whipped cream or gelatin, which allows the dessert to set in a mold when left in the fridge.

Bavarian cream is served as a molded dessert or as a filling, whereas custard needs to be poured into a bowl or over the dessert it is being served with.

Even though custard and Bavarian cream are made with similar ingredients, they have unique tastes that can usually be identified straight away.

Custard has a rich, creamy taste to it, with the sweetness from the sugar and the warm notes of vanilla.

While it has a rich and creamy taste, the flavor is not overwhelming, so it can be paired with many other baked goods, desserts, or ingredients easily.

Bavarian cream tastes similar to buttercream, but it is slightly richer and has a more custard-like flavor thanks to the egg yolks and sweetener.

If whipped cream is used to make the Bavarian cream, this adds a buttery, fresh flavor to the dessert too.

Just like custard, Bavarian cream holds up well when served with other ingredients such as fresh fruit, or when it is used as a filling in a pastry.

Custard and Bavarian cream are served quite differently. Custard is traditionally served warm, but it is just as delicious when served cold.

It can be either a warm or cool dessert and can be served on its own or with other baked goods or ingredients.

Bavarian cream however is almost always served cold. It has a thicker consistency than custard, and is firmer thanks to the whipped cream or the gelatin, and being left to set.

Bavarian cream can be served as a dessert on its own, topped with fresh fruit, but it is often used as a filling in pastries.

Custard is a thick and creamy dessert, but it is runnier than Bavarian cream. Some starch can be used to thicken custard, or the egg yolks work to thicken the custard over heat.

Either way, the custard does thicken to a certain extent, but it will never set to a mold.

Other than being thick, but still quite liquid, the custard should be smooth. Sometimes, if the starch is not mixed in properly, the custard might be slightly grainy, but made right, this should not happen.

Bavarian cream is often mixed with gelatin or whipped cream and is then left to set in a mold.

Once set, the Bavarian cream has quite a thick texture, much thicker than that of custard. Sometimes Bavarian cream can be left to set to such an extent that it can be sliced with a knife.

Bavarian cream, much like custard, should be smooth and not grainy, but if the gelatin is not mixed in properly, then it might have some lumps in the mixture.

Both custard and Bavarian cream are two desserts that can be served with a range of ingredients, but their uses are quite different.

Custard is a great accompaniment for rich desserts such as sticky toffee pudding or a saucy chocolate pudding.

The fresh vanilla taste helps to balance a rich dessert, and it does not overpower other flavors. A popular dessert is custard and jelly.

Bavarian cream is most commonly served with fruit. This could be berries or sliced bananas, and even fruit preserves. When making a pie with Bavarian cream, fruit is often used to top the pastry.

Is Bavarian Cream The Same As Boston Cream?

As mentioned above, Bavarian cream is made when whipped cream or gelatin is combined with a yolk-only custard, and it can be eaten on its own as a dessert or can be used as a filling. It is denser than Bostom cream.

Boston cream is runnier than Bavarian cream, and it is used as a filling in doughnuts, cakes, pies, and pastries.

It is not eaten on its own as a dessert. It is also best served with a chocolate dessert, such as a ganache, whereas Bavarian cream pairs with fruit better.

Boston cream is made mainly using milk and eggs, and it is considered a type of custard as well. However, it is different from a traditional custard and is only used as a filling for pastries and desserts, whereas custard can be enjoyed on its own.

Custard and Bavarian cream might seem similar, but they are two different desserts served in different ways.

Custard is made by combining egg or egg yolks, milk or cream, and sugar over heat, stirring until it thickens and sweetening it with sugar.

Bavarian cream is made by combining a yolk-only custard with whipped cream or gelatin and allowing it to set before using it as a filling in a pastry or serving it as a dessert with some fruit.

Both are rich, creamy, and delicious, and you should definitely try out both to see which is your favorite!

Now that we’ve gone over all of the key differences between custard and Bavarian cream, let’s take a look at a few related questions on the subject!

What goes well with custard?

Custard can even be flavored to add more flavor to a dessert, such as adding caramel to a custard, or some extra nutmeg.

Is custard served hot or cold?

Custard is most commonly served hot, but it can be served cold as well. It is a popular ingredient in a trifle, which is a dessert served cold.

It can also be served with cool jelly. However, hot custard is a popular choice to go with hot desserts.

Whether you have custard hot or cold will be totally up to personal preference, and the dessert you are enjoying it with.

If you’re interested in making your very own vanilla bean custard from scratch, here’s a great video on the subject!

Up Next: Parasite Eggs On Crab Legs

Parasite Eggs On Crab Legs (How To Spot Them And Can You Still Eat Them?)

Can You Bake Cakes In Glass Pans?