The Difference Between Custard And Ice Cream 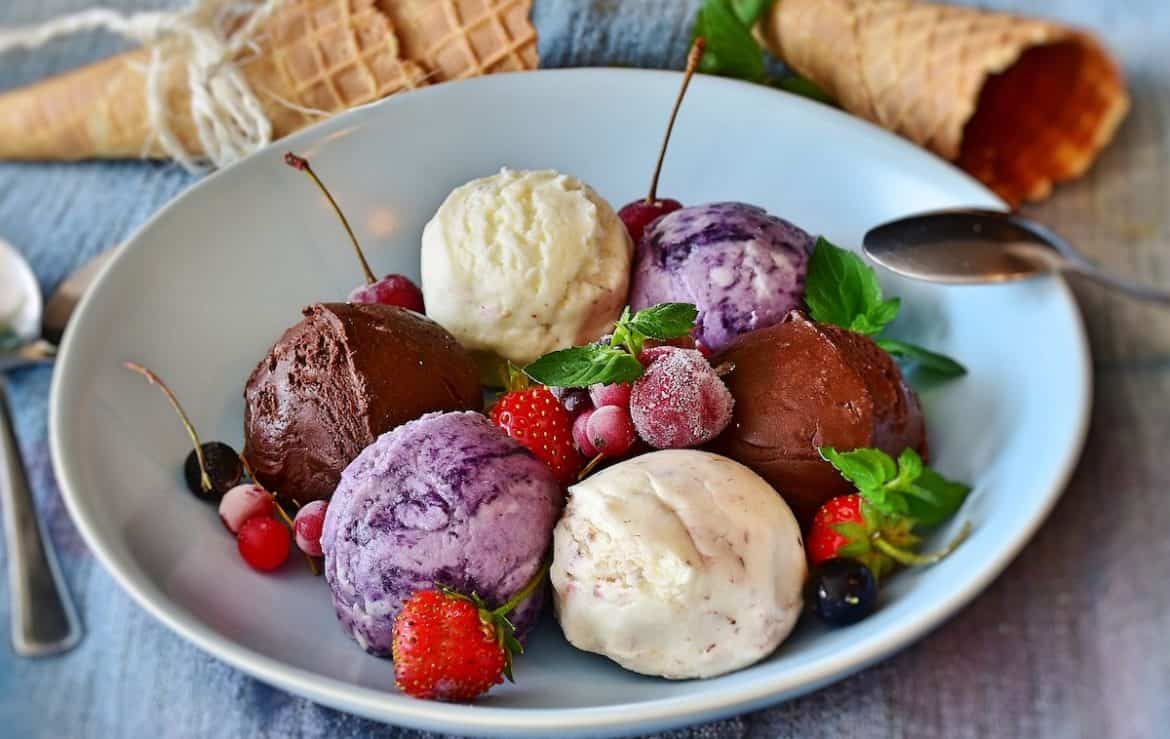 Ice cream and frozen custard are high on our treat list during the warmer months. Nothing beats a scoop of cold, creamy deliciousness. The two are often mistaken for each other, being very similar in appearance, texture and sometimes even taste, however, there are some substantial differences between the two.

What is the difference between ice cream and custard? Just from tasting alone, you will be able to tell that frozen custard is denser, creamier and smoother, whereas ice cream is lighter and airier. The two have different flavors to choose between, and these do have an effect on the nutritional content.

While you might love frozen custard and ice cream equally, it is worth getting to know the difference between the two.

The Difference Between Ice Cream and Frozen Custard

There is actually a lot to cover when it comes to the differences, so stay seated for this journey into these two frozen sweet treats!

The first difference between the two is the ingredients used. Ice cream is made using fewer ingredients, and the additional ingredients in custard really make such a difference to both the taste and texture.

Simple vanilla ice cream only uses four ingredients – heavy cream, whole milk, vanilla, and sugar. That is all that is needed to make a decent, creamy serving of ice cream. Different flavors of ice cream call for extra ingredients, but the core ingredients do not change, all you need is milk, cream, and sugar.

Custard is a little more complex. Along with whole milk, heavy cream, vanilla, and sugar, egg yolks are added into the mixture, along with salt. Frozen custards need to contain at least 1.4 percent egg yolk and at least 10 percent milkfat to be considered yogurt.

The egg yolks make the world of difference in custard, and without the right amount, it would just be considered ice cream. The egg yolks add a whole new creamy dimension to the custard and give it the thicker consistency that is noticeable between the two.

The addition of egg yolk and salt in the custard makes for a dense, smooth consistency and texture, very similar to the consistency of yogurt and pudding.

Ice cream has an airy consistency compared to custard, and custard definitely wins in the texture department.

Some soft serve ice creams can contain nearly 50 percent air, so compared to this, frozen custard is much denser. This also adds to the creaminess of custard, which is also considerably more than ice cream.

Deciding between the two textures is completely up to personal preference, whether you like custard which is denser and creamier or ice cream which is lighter and airier.

Another notable difference between the two is the temperature they can be served at. We are all familiar with ice cream melting off the cone on a hot day, but the same cannot be said for custard, which can be served at a warmer temperature.

The egg yolks in custard mean it is more stable at a high temperature, so the custard will melt less than traditional ice cream before you’re done eating it.

Ice cream is quick and easy to make, and if you have the right equipment at home, you can whip up some ice cream in around 30 minutes. However, custard takes quite a bit longer.

Once again, this is due to the egg yolks. To ensure the egg yolks remain safe, you have to achieve the right temperature, dissolving the ingredients at the right heat before cooling and freezing.

Ice cream can be made by dissolving the sugar, heavy cream, whole milk, and vanilla, and then pouring it into the ice cream machine and leaving it to churn and freeze for around 25 minutes.

Custard on the other hand, between heating, dissolving, whisking and cooling, can take between four and a half hours and a whole day to make.

Overrun is the amount of air that is beaten into ice cream of frozen custard, and is another factor that makes the two quite different. Ice cream machines churn more air into the mixture to achieve a fluffier consistency, whereas custard machines, or the process of making custard, incorporate less air into the mixture.

This is what creates the light, airy texture of ice cream, and the dense, smooth texture of frozen custard.

The nutritional content of ice cream and custard is fairly similar, as both contain milk products and other similar ingredients. The calorie count of each also depends on the flavor of the frozen dessert, but using basic recipes, these are the nutritional differences between the two.

Custard does have a lower amount of calories compared to ice cream, but both are considerably high. You would be better off eating frozen yogurt if you are calorie counting.

As there are different varieties and flavors, you should check the nutritional content specific to the ice cream or custard you are eating.

The fun in ice cream comes from all its different flavors – from birthday cake to pistachio, there is an ice cream flavor for every taste and then some. Ice cream can also contain other additional ingredients such as chocolate chunks, nuts, fruits, and cookie bits.

Custard, while more traditional and more limited to flavors, still has some variety. You can get chocolate-based custards, fruit-based, and even some savory custards to be served with a meal.

The ingredients used in each, for the different flavors, will have an impact on the nutritional content and calorie count, but both are desserts, and should be a treat instead of a diet item!

Both ice cream and frozen custard have high sugar content, so for kids or those who are calorie counting, they might not be the best option to eat regularly.

Luckily, there is a way to provide some sweet, frozen delight without having to resort to the high sugar content of ice cream and custard. You can choose a low-sugar yogurt, add in some fresh fruit for some sweetness, and freeze it. You can either freeze it in a large portion, in a tub, or in individual lolly makers.

The added fruit, and the low-sugar yogurt, are a great treat during the summer, and offer up a delicious frozen dessert without any of the bad bits.

Where Does Gelato Fit In?

Gelato is closely related to ice cream, and the two are often confused for each other. However, gelato has less air whipped into it than ice cream, which means it is more spreadable and creamier. Gelato also contains less butterfat than ice cream and is served at a warmer temperature.

Traditional to Italy, gelato supposedly has a better flavor experience, as there are fewer fats to coat the taste buds.

So while they seem very similar, ice cream, custard, and gelato are all pretty unique!

What is custard-style ice cream?

Custard style ice cream is just another way to describe frozen custard, which is not the same as ice cream.

Custard is traditionally served warm along with puddings or on its own, but it has now become increasingly popular as a frozen treat, thanks to its rich, smooth texture.

Is soft-serve better than ice cream?

Soft serve is actually better for you than normal ice cream. The secret is in the fluffy texture of soft serve, which is due to lower fat content. You might be wanting to watch your waistline, but are craving ice cream, so rather opt for some soft serve to enjoy.

Is there a healthy ice cream option?

Many ice cream variants are hitting the market. Some use non-fat milk and cream, and others use substitutes for sugar. There are also many vegan options available.

This is a great relief for those who do not consume milk, as both ice cream and custard traditionally contain lactose. Many ice creams are now free from artificial colors and flavors and use all-natural, non-GMO ingredients.

There is no denying that both ice cream and custard are incredibly delicious, and there is not much that you can substitute them for on a hot summer day.

Knowing the difference between the two foods will help you understand what goes into each, how they are made, and how to make them at home.

Grab a scoop of ice cream and another of frozen custard today and get tasting and identifying all the differences between them!

Up Next: Can You Refreeze Melted Ice Cream? – Think Twice!

Does Vinegar Freeze? – The Ultimate Guide