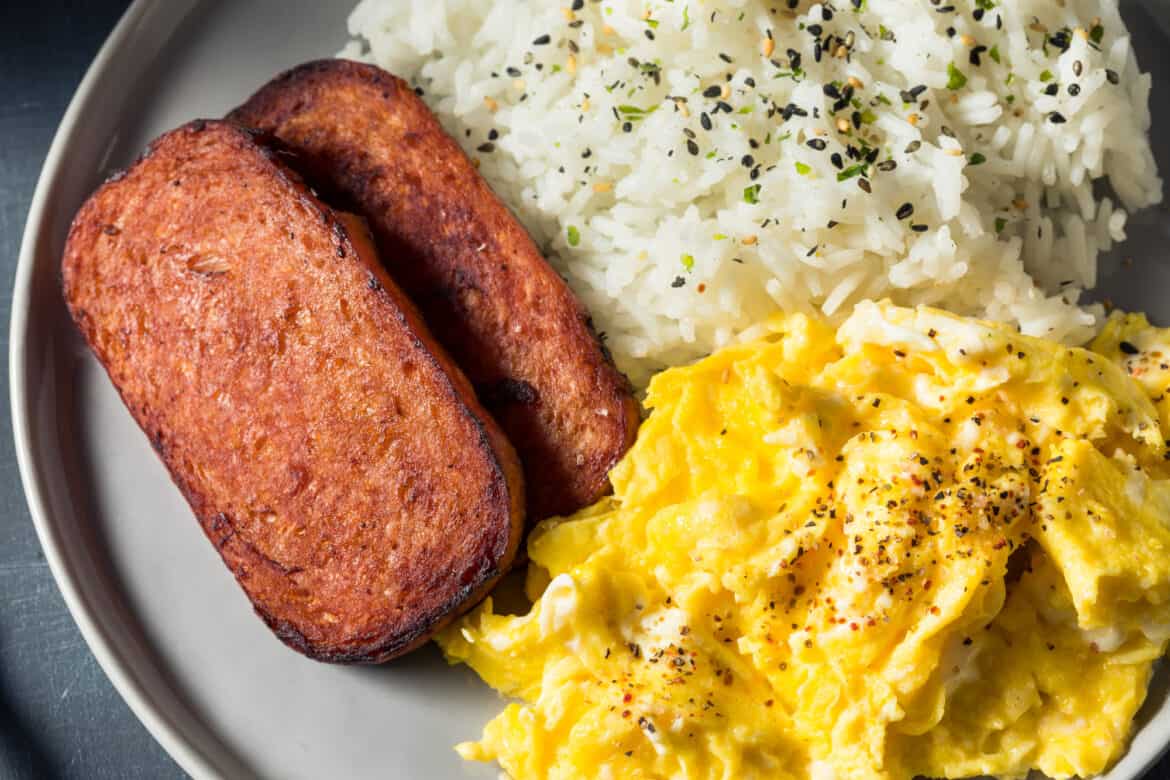 Spam and corned beef are two of the most popular types of processed meats in the United States. They are convenient, easy to use, and have a long shelf life.

But how are they different from one another? Let’s find out!

So, what is the difference between Spam and corned beef? Spam is a processed canned product made from pork shoulder and ham, whereas corned beef is a type of cured meat made from brisket that has been brined in salt and spices.

Read on to find out what Spam and corned beef are made from, how they are made, how they are served, what they taste like, and much more!

Spam is a popular brand of canned meat that first hit shelves in 1937. Created in Austin, Minnesota, it filled a large gap for inexpensive meat products and its popularity has grown ever since.

Believed to have derived from the words “spiced ham,” Spam is made with a mixture of ground pork and ham and an assortment of flavorings and preservatives.

Potato starch is used as a binding agent for the chopped meat while sodium nitrite acts as a preservative. The jelly-like substance surrounding the meat comes from natural pork gelatins that solidify when cooled.

The ground pork and ham are combined with the other ingredients, which are then pressed and cooked.

When the mixture reaches a certain temperature, it is vacuum-sealed into cans. The cans are then boiled and allowed to cool before being labeled.

Spam is available in 15 different flavors and, depending on the variety, it may include other ingredients such as chicken or turkey.

It has a fine texture and offers a satisfying mouthfeel. It tastes similar to ham, since it is one of the main ingredients, and is salty and a bit spicy.

Since Spam is already cooked, it is safe to eat straight out of the can — it can also be baked, fried, and grilled. When eating straight from the can, heating is optional since the meat is precooked.

This rectangular canned meat is most commonly sliced and served as a sandwich filling; however, Spam is incredibly versatile and can be used in a variety of other recipes as well.

Pan-fried Spam served alongside eggs for breakfast is a popular option, and a lot of people love Spam musubi!

What Is Corned Beef?

Corned beef is a type of preserved meat that has been cured in a salt solution.

In the US, corned beef is most commonly made from beef brisket and can be seen at Jewish delis around the country since beef brisket is a type of kosher meat.

It can also be made using beef round primal cut since both are relatively tough cuts of meat that are best cooked slowly.

Corned beef is made in a curing process that takes around 5-8 days.

The beef brisket is placed in a large pot of salt water and kept in the refrigerator. Commercially, huge barrels of briskets are cured in a walk-in cooler.

In addition to beef and salt water, there are spices, garlic, and herbs added to the mix. It often includes bay leaf, black peppercorn, mustard seed, dried red pepper, and coriander.

In addition to the salt and spices, a salt-nitrite blend called “pink curing salt” is often added to the mix to prevent the beef from spoiling while it’s curing. Pink salt is used in many types of cured meat such as bacon, ham, salami, and hotdogs.

Ironically, “corned” beef has nothing to do with corn. Corn actually refers to the rock salt used to preserve the beef!

Back in the 17th century, corn was used as a generic name for any kind of grain, and since the large chunks of rock salt are roughly the size of a kernel of grain, they came to be known as salt corns. Hence the name: “corned” beef!

Corned beef can refer to either cured beef available at the grocers, cured beef that you make at home, or the canned salt-cured product available in supermarkets.

Canned corned beef is fully cooked and can be eaten on its own or used in a corned beef sandwich traditionally served with mustard and horseradish sauce.

Corned beef and cabbage is an Irish-American meal associated with St. Patrick’s Day. You can also use the cured meat to make corned beef hash consisting of chopped-up meat, potatoes, and onions.

If you purchase raw corned beef, the best way to go about it is to cook it slowly. You can bake it, boil it, or cook it in a slow cooker.

Corned beef tastes nothing like the roast beef you are used to eating due to its curing process and it has a soft, supple texture and pinkish-red color.

With a balanced flavor that is salty, spicy, sour, and meaty, the briny taste of corned beef is bold but not overpowering, especially when paired with other ingredients.

How Are Spam And Corned Beef Different?

Spam and corned beef are very different products in terms of their ingredients, textures, and flavors.

Spam is a canned product made with pork shoulder and ham, while corned beef is a preserved meat product made using beef brisket that has been brined in salt and spices.

Spam is most commonly used on its own or in sandwiches, whereas corned beef is used in a variety of recipes ranging from sandwiches to tacos, casseroles, and stir-fries.

The biggest difference between the two is that “SPAM” is a trademarked term by Hormel Foods Corporation, while corned beef can be used to describe any cut of meat that has been brined or cured.

How Are Spam And Corned Beef Similar?

Despite the two being different types of processed meats, Spam and corned beef share quite a few similarities.

Both are pre-cooked and processed meats that can be eaten right away. Spam and canned corned beef are extremely convenient to use as they require absolutely no preparation.

Perfect for busy weeknights and quick lunch fixes, all you have to do is buy these canned meats, take them out of their packaging, and enjoy them however you like!

Almost all processed and canned foods have a bad reputation due to the additives that they use. Although Spam and corned beef are made with different main ingredients, both are high in sodium.

Salt and other preservatives add extra flavor and help extend the shelf life of such products, but at the expense of making them unhealthy for frequent consumption.

Due to the high amount of sodium in these products, it is recommended to eat them only occasionally.

Here is how the two compare with each other:

Which One Is Better?

Spam and corned beef are two very different products. Both are delicious and convenient — deciding which one is better really comes down to your personal preference!

If you prefer ham and pork, Spam is your clear winner. However, if you like beef brisket, you’d enjoy corned beef much more. You can give both of them a try and see for yourself which one you like better.

Health-wise, Spam and canned corned beef are both high in sodium, highly processed, and contain preservatives such as sodium nitrite that may be bad for your health.

Keeping that in mind, you should limit your intake of these processed foods and opt for fresher and healthier alternatives.

Now that you know all about Spam and corned beef and how they compare with each other, here are a few additional questions we thought you might have.

What is the difference between Spam and luncheon meat?

The main difference between Spam and luncheon meat is the pricing and type of meat used. Spam is primarily made with pig meat and is less expensive than luncheon meat, which uses higher-grade and more expensive meat.

What is the difference between Spam and deviled ham?

Deviled ham is a popular canned food item made with ground ham and spices. It should not be confused with Spam, which is made mostly of pork shoulder and lacks the spiciness found in deviled ham.

Why is corned beef so pink?

Corned beef has a distinctive pink color due to the presence of sodium nitrite, which is a substance used for curing various types of meat that causes the meat to remain pink even after cooking.

Can You Freeze Spam?

What Does Corned Beef Taste Like? – The Ultimate Guide

Can You Smoke Meat With Parchment Paper?