What Does Corned Beef Taste Like? – The Ultimate Guide 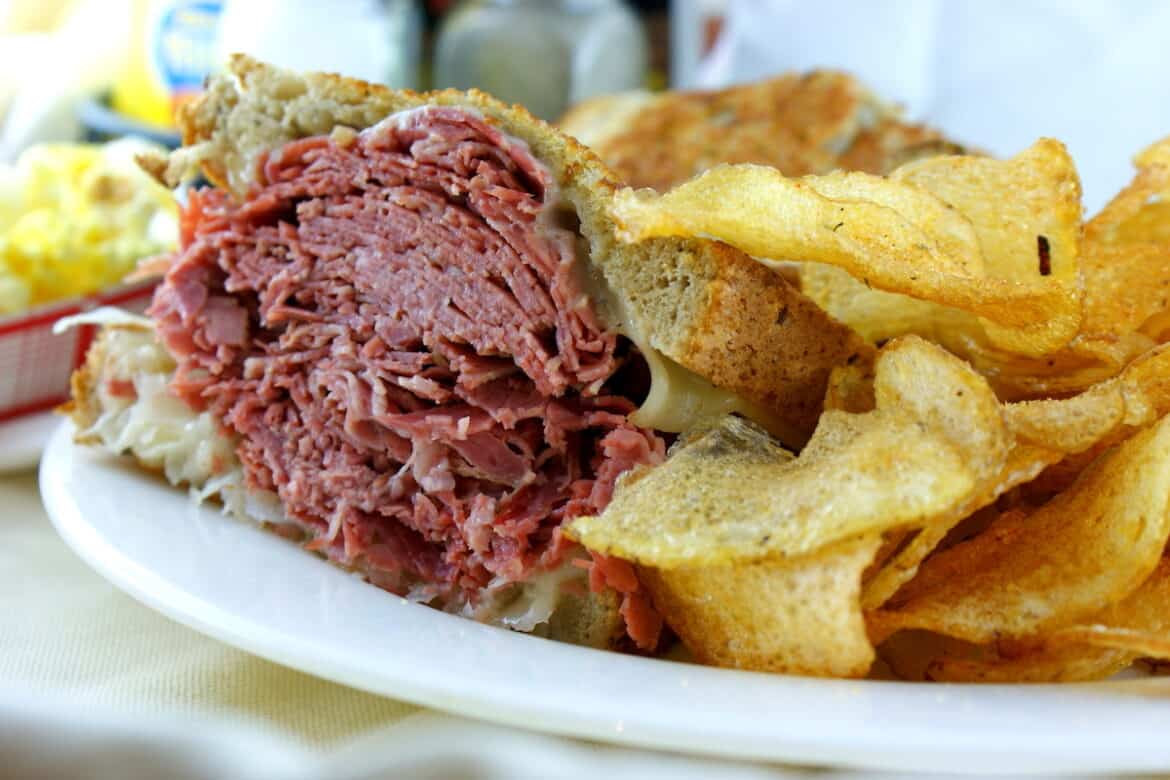 Most famous for being used in Reuben sandwiches and for traditional meals like corned beef and cabbage, corned beef is a delicious type of meat that not everyone has had the chance to try.

The name corned beef is related to the German language and to the Irish history of the food.

‘Corned’ comes from a German word used to describe the process used to make this type of beef, which involves curing the meat in coarse salt before brining it in liquid and spices.

For anyone unfamiliar with corned beef, it can seem daunting with a name that doesn’t give anything away. Simply put, it’s a cut of beef (typically brisket or top round) that has been salt-cured or brined in a salt solution with pickling spices.

So, what does corned beef taste like? Peppercorn, mustard seeds, bay leaves, and coriander are the traditional spices used in the brining solution for corned beef, so bright peppery notes are the dominating flavors of corned beef. Because of the fatty nature of the meat, it also has a deep umami flavor with a subtle sweetness.

Join us as we tackle the flavor and taste of the classic Reuben sandwich accompaniment, corned beef!

After being cured and spiced, corned beef is naturally very salty. This doesn’t always come through in the finished food, though.

How salty the meat is depends on how you prepare it. The main ways to enjoy corned beef are boiled, slow-cooked, and baked. They all have a different effect on the taste.

Traditionally, corned beef was always boiled. This is also the best way to leech a lot of salt from the meat.

Slow-cooking is a close second, depending on the liquid you may cook it in, while baked meat stays fairly salty because the outside of the meat cooks more quickly than the inside and holds the juices in.

The meat also brines (or sometimes boils) in the same type of spice mixture used to transform cucumbers into pickles.

Peppercorns are prominent in this, giving the meat a subtle peppery flavor. Other components of this spice mix that infuse into the meat are mustard seeds, bay leaves, and coriander.

The soft fat in the cuts of meat used to make corned beef also lends some wonderful umami and subtly sweet flavors to the meat.

While there are a variety of ways to prepare corned beef that can have an effect on the texture, corned beef is always soft. Not necessarily mushy, but a lot softer than you would expect a large cut of beef to be.

Have you ever had meat that has been slow-cooked for a very long time? Fall-off-the bone, cut-it-with-your-fork tenderness?

Yup, that’s the texture of corned beef. Of course, it’s slightly firmer if served cold, but in general, this is a wonderfully tender meat that lends itself well to many preparations.

Because of the cut of meat used you don’t really have any unwanted gristle or veins in your meat.

While the meat is generally fatty, it is soft fat that melts with cooking. If you want to avoid the texture of the fat as much as possible, it’s best to boil the meat as much of the fat renders out into the water.

The tenderness of corned beef is above other types of beef. This is because it’s achieved using a combination of methods.

The way the meat is cured, the way it’s cooked, and the way corned beef is served all converge to showcase the succulent tenderness of this meat.

While corned beef is a versatile food, there are a few ways you will see it commonly prepared. They are going to be either whole pieces of meat or a dish like corned beef hash which is often sold canned.

Differences between fresh and canned corned beef will be discussed in the next section.

Corned beef is mainly cooked via either boiling, baking, or slow cooking. The traditional Irish meal of corned beef and cabbage which is often eaten around St. Patrick’s day is a great example of cooking the meat by boiling it.

When you boil corned beef, it helps remove much of the salt from the meat. It also helps keep the meat from drying out and can help remove excess fat.

As the fat melts off the meat it rises to the top of the water and when you pull the meat out at the end it is soft, flavored by the fat but not greasy.

Another way to cook corned beef is to use a slow cooker. This way you can add vegetables like potatoes, carrots, or cabbage and everything will be done at the same time.

This method takes longer than boiling to achieve the same softness but is easier for those with a busy schedule.

If you do not want to boil or slow-cook the meat, you can bake it. This will result in a different texture than meat cooked through either of the other two methods discussed.

The meat will be a bit tougher and a bit greasier. It may also be saltier as baking causes meat to hold its juices in, so less salt escapes.

Corned beef is often sold as shelf-stable canned meat. You may find it by itself, but you may also find it in a preparation called corned beef hash, which is a breakfast food where the corned beef is mixed with cut potato.

There aren’t many differences between fresh and canned corned beef. Essentially, the cooking process is the same as well.

One big difference here is that because of the high temperatures required during the canning process (over 250°F) the flavors may change.

For example, some of the more subtle notes in the spice mix may be missing because of the way the meat breaks down in the high heat and pressure environment. One other factor is the cut of meat used.

Most canned meat is made from a lesser grade of meat that for whatever reason is not fit to be sold as a large portion (like with fresh corned beef brisket).

Because the flavor of finished corned beef is mainly dependent on the quality of the salt and the cut of meat used, this can have a big impact on flavor.

With canned corned beef you can expect meat that is tasty, if not as full-flavored as when fresh.

The meat itself may be a bit bland if a lesser cut of meat has been used, and may also be greasier than fresh corned beef due to the fat content of the lower quality cuts of meat.

Now that we’ve gone over what corned beef is and how it tastes, let’s take a look at a few related questions on the topic!

How to cook corned beef?

There are a variety of ways to cook corned beef. Most people serve this meat hot, even on sandwiches.

You can cook it by boiling, baking, or slow cooking. The typical way this meat is prepared is by boiling with spices and then serving alongside vegetables like cabbage, carrot, and potato.

There are a few things you can do to get canned corned beef that tastes better than the rest.

One is to do a bit of research and buy from a brand that used a better quality cut of meat as the cut of meat used to make the corned beef before it is canned has a significant effect on the taste.

Another thing you can do is add a little bit of a strong flavor or seasoning to liven up the meat. Something hot (spicy) or acidic is best for this.

A common example is preparing corned beef hash and then drizzling it with plain yellow mustard. This vinegar in the mustard balances the fattiness of the hash well.

Corned beef hash is a dish often sold canned. It is a mixture of ground or fine minced corned beef and minced potato.

By itself, the dish has a meaty flavor but is somewhat bland otherwise. For this reason, corned beef hash is often served with something spicy or acidic to balance the flavor.

Where does the term corned beef come from?

The ‘corned’ in corned beef comes from a German word meaning ‘pellets’. This is because corned beef was packed in high-quality salt with large crystals (aka pellets) during the curing process.

Corned beef is also sometimes called pickles brisket after the seasonings used to make it.

How do you make corned beef?

To make corned beef, you start with beef brisket or a top round cut. The meat is cured using very coarse salt and is also brined with spices to infuse it with flavor. After this brining process, the meat is ready for cooking.

Up Next: 9 Best Oyster Sauces

The 9 Best Substitutes For Cornmeal