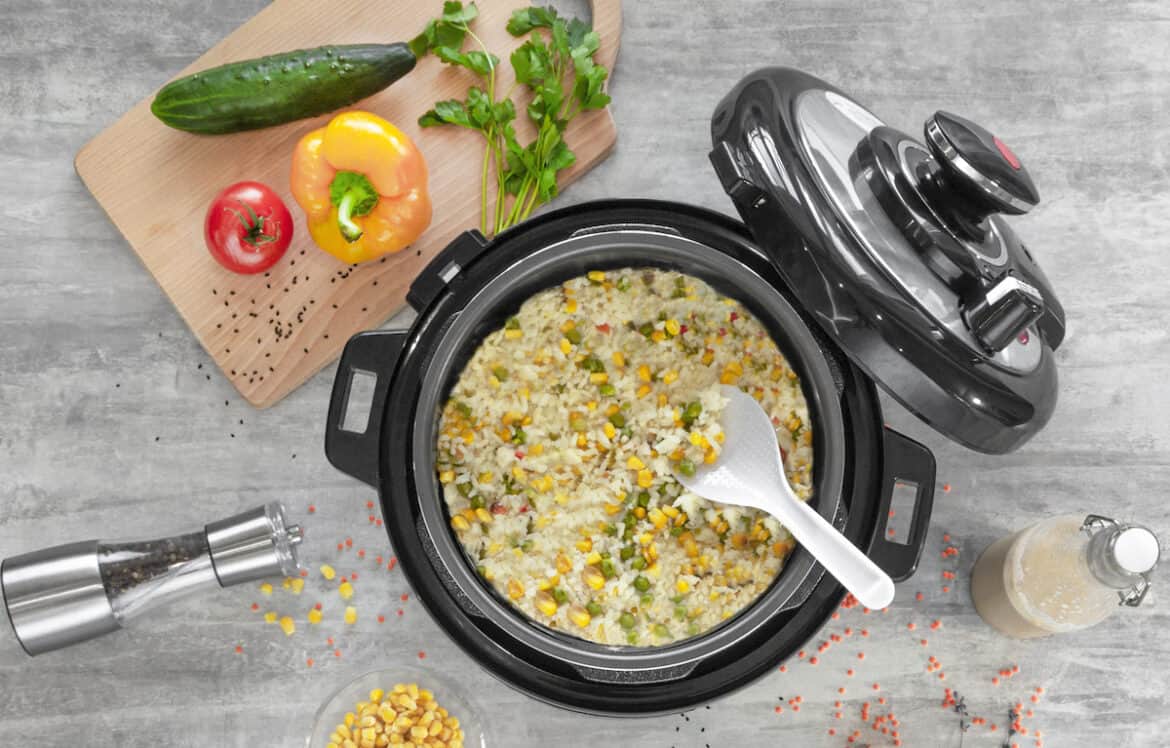 Dinner time seems to take us by surprise every single night. It’s not really that it takes us by surprise, it’s more that by the time we get through the long workday having the energy to make a big dinner can be challenging.  If you have to prep items, it can take so much time.

We have to squeeze so many things into that precious little time between the end of a workday and bedtime. Why make it more difficult than it needs to be?! For this reason, we recommend that you use tools that simplify the process. What about a pressure cooker or even a slow cooker to help you with meal times?

What is the difference between a pressure cooker and a slow cooker? While both of these serve similar purposes they actually work very differently from each other. The slow cooker is designed to cook your meal slowly, usually over the span of several hours. This allows you to set it and forget it. On the other hand, a pressure cooker is designed to cook your food quickly. You can cook a whole chicken in a matter of minutes rather than baking it for hours.

In this guide, we will walk you through the differences between a pressure cooker and a slow cooker. Our hope is that you will understand the value of each tool in its own unique way and know how to use them. We will even share some of our favorite product options for each one!

Keep reading to see how these tools measure up in a pressure cooker vs. slow cooker review.

Pressure cookers and slow cookers both serve useful purposes. They can both help you make dinner time so much easier by doing most of the work for you.

When you use one of these small kitchen appliances, all you have to do is prep the food for cooking and then serve it when it’s done!

As we progress through this guide, we will first review the pressure cooker and then the slow cooker.

We will share some of our favorite options in case you’re looking for a good choice and let you know how they differ from each other. Then, we will round out the guide with a quick comparison review for your reference.

Let’s get started, shall we?

What is a Pressure Cooker?

A pressure cooker operates using steam pressure. The pot that holds the food seals and the steam builds up, creating pressure. This process helps to cook the food inside quickly and efficiently.

Most pressure cookers have an assortment of settings and can cook just about any type of food that you want them to. You can cook entire meals all at one time and reduce your cooking time significantly. Plus, you’re only using the pot of the pressure cooker so you have fewer dirty dishes and less mess!

The theory behind the pressure cooker is not a new one. This tool has been around since the 1600s.

Of course, it took quite some time to perfect the concept and even make it safe for use. Pressure cookers have been known to explode if not managed appropriately, because of the steam pressure build-up.

How a Pressure Cooker Works

We’ve already talked about pressure cookers operating on steam power, but how does that cook your food faster?

When you place items into the pot, you typically must also add liquid. The liquid is converted to steam as the cooker heats. You control this steam pressure with a valve on the lid of the pressure cooker.

Basically, the steam pressure raises the boiling point of the water or liquid that’s inside the pot, allowing the boiling point to potentially reach up to 250 degrees. The high temperature advances the speed of the food cooking.

Additionally, the increased pressure of the steam forces liquid into the food at an increased speed. This forced liquid not only tenderizes the food but also helps it to cook much faster as well.

Your food does not come out just steamed but fully cooked and even caramelized. The flavor is deep and rich typically.

What to Make in a Pressure Cooker

Pressure cookers have been used for cooking for a long time but before revolutionary pressure cookers like the Instant Pot and other brands, they had a more defined purpose for canning foods.

If you’re at all familiar with pressure canning, that is done inside of a pressure cooker. Some of you may have grown up in a home where fruits and veggies and other items were canned on a regular basis. You may have helped load and operate the pressure canner.

Were you ever aware that is could be used for so much more than just canning?

There are a lot of great meals you can make in a pressure cooker. Let’s be honest, you can probably cook just about anything you want in them. Some pressure cookers even have a slow cooker setting that you can use.

Here are a few of the most popular things that are made in pressure cookers. Remember, you can make a variety of foods.

These are just a few of the most popular examples of pressure cooker recipes. Just know that if you can name it, you can probably cook it in your pressure cooker.

We want to share with you a few of our favorite pressure cooker options to choose from. These will not be detailed reviews of the product but rather a simple overview and options that you can look at if you’re interested.

What is a Slow Cooker?

A slow cooker cooks slowly. It does not use steam pressure but rather just uses a heated bowl that is closed in with a lid.

Slow cookers are commonly referred to as crockpots. Of course, there is also a brand named crock-pot.

A slow cooker works by simmering the food inside at a low temperature for an extended length of time. This lets you set the food in with your temperature setting and let it cook for hours without you having to do anything to it.

You can literally set it and forget it.

This means you can put your food in and set it up and then come home to a fully-cooked meal. Some meals take longer than others but the value of this tool is that you don’t have to monitor it. The food can cook and you can do what you need to do.

At one time, slow cookers were primarily used for soups and stews but people have become increasingly creative with the slow cooker and there are so many delicious things you can make.

We already pointed out that a slow cooker simmers the food in it for a long timeframe. It does not boil, fry, or bake the food inside.

These types of cookers use moist heat to slowly cook the food within. Notice that slow cookers cook slowly while pressure cookers typically are used for fast cooking. What you will find is the same is that both of these have a heating element that holds a pot and is covered with a lid.

These cookers have a ceramic or porcelain pot that is set into the heating element. The manner in which the pot is heated (i.e. on the bottom only or on the sides) varies based on the model. They come in varying sizes as well.

These cookers cook in a continuous method when on. Some models offer timer features that allow you to cook for a certain number of hours and then switches off or to warm.

If you get really fancy, sometimes you can even set them to start cooking at a specified time.

Things to Make in a Slow Cooker

Interestingly enough, you can make a lot of similar foods in the slow cooker and the pressure cooker. It’s just a matter of how they are cooked as you do so.

Slow cookers have always been a popular choice for soups or beans because they’re simple and they’re better the longer they cook.

But, a lot of creativity has been put to use with the slow cooker and you can make so many different things. Here are a few ideas of some popular slow cooker meals that you just might need to try.

These are just a few common things that work well in the slow cooker. Don’t let these limit you. There are so many things you can make!

Just as we did with pressure cookers, we wanted to share with you some of our favorite slow cooker options. Again, these are not detailed reviews, just a simple list of our top 3 picks and a basic overview of each one.

We hope these can come in handy if you’re in the market for a new pressure cooker or slow cooker.

It’s interesting that pressure cookers and slow cookers can be so different in how they operate and yet so similar in what they can accomplish.

The end result, either way, is a meal that you don’t have to stand over and monitor from start to finish. It’s a convenience and simplicity factor meant to help you out through the meal-making process.

The most notable difference in these kitchen tools is the method in which your food is cooked. The pressure cooker uses steam pressure while the slow cooker simmers the food within on low heat.

The pressure cooker will cook meals quickly while the slow cooker cooks the meal over several hours. Both have various settings and functionality that allow you to manage the functions of the tool.

We hope you find this guide to understanding the differences between slow cookers and pressure cookers to be a valuable resource.

We invite you to review the question and answer section for some additional details.

Can You Put Raw Meat in These Tools?

Yes, both are fully capable of handling raw meat quite well!

Do You Need Water?

A slow cooker does not require water but you may want some type of moisture. A pressure cooker will require water or liquid for the process.

Up Next: How To Reheat Rice In A Rice Cooker

Shawarma Vs Gyro – What’s The Difference?

The Best Cheese For Fondue