Home Foodsguy Pastrami Vs Roast Beef – What’s The Difference?
FoodsguyThis vs That 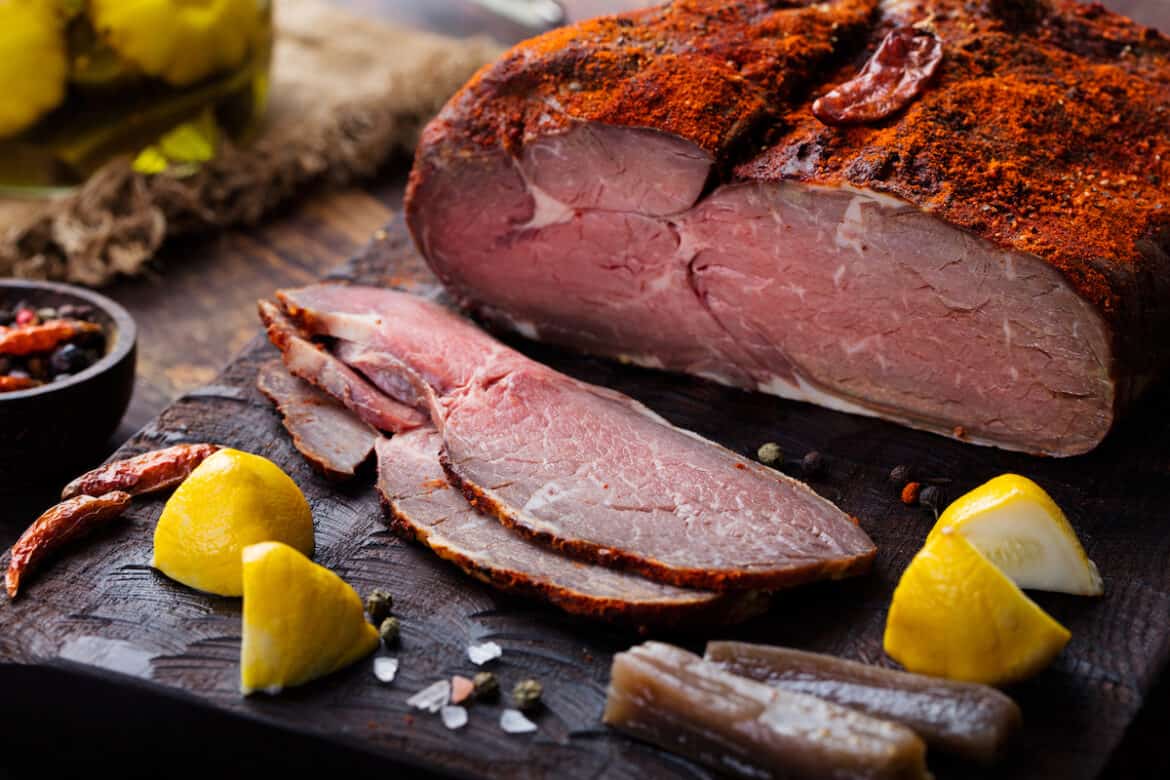 Pastrami and roast beef both make delicious sandwiches but there are key differences between these two dishes.

What are the differences between pastrami and roast beef? Pastrami is generally made from the navel end of the beef brisket, while roast beef can be made with different cuts. Roast beef is easier to make, as the meat is simply roasted. As for pastrami, the meat is cured, heavily seasoned, and then smoked.

In this article, we have discussed all the differences between pastrami and roast beef, from preparation and cooking methods to pairings and nutrition.

Pastrami is a popular sandwich meat that undergoes a few stages of preparation and cooking.

The navel end of the beef brisket is first brined many days or weeks. Then it is seasoned with numerous spices and dried herbs and smoked.

Pastrami is often compared to corned beef. However, there are major differences between the two.

Firstly, corned beef is made using beef brisket. Pastrami, as we have already mentioned, is generally made using the navel end of the brisket. Secondly, once cured, the meat is boiled for corned beef and smoked for pastrami.

Pastrami, roast beef, and corned beef are all different from brisket as well, even though they all come from the same cut.

What Is Roast Beef?

Unlike pastrami, roast beef is quite self-explanatory.

This is a popular main course dish where the meat is seasoned and cooked in the oven for around 20 minutes per pound.

The outside of the meat should be nicely browned while the inside should be moist and slightly pink.

Roast beef is often sliced thicker than pastrami and eaten on its own, but is also commonly eaten in sandwiches.

While pastrami and roast beef are both popular sandwich meat options, there are more differences between the two than there are similarities.

Pastrami originated in Romania. Translated from Romanian, a pastra means “to preserve,” which sums up how pastrami is made.

Pastrami was first introduced in the United States toward the end of the 19th century by Romanian Jews.

Roast beef is a signature English dish. Dating back to the early 18th century, roast beef is now a popular dinner dish in many countries of the world, including the US and Canada, Australia, and New Zealand.

Roast beef is also a well-loved dinner option in the countries of South Africa, and of course, all around the UK.

While pastrami can be made with different meats, including pork and turkey, the most widely used meat product for pastrami is beef. So, traditional pastrami and roast beef are both made from beef. But what sets them apart?

For pastrami, the beef cut used is usually the navel of the brisket. For roast beef, you can choose from a few different cuts, such as top sirloin and eye of round. Tri-tip, a triangular cut, is also used for roast beef.

If you are going to make pastrami from scratch, be ready to spend a lot of time and effort on it. And arm yourself with patience before you can enjoy your homemade pastrami.

First, you need to get the right cut of beef brisket and keep it in brine for days or weeks. You can shorten the preparation time by buying a pre-brined brisket.

Once you have cured the meat for long enough, it is time to take it out from the brine, pat it dry, and cover it with a lot of spices, including black pepper and coriander.

Smoke the spice-coated, cured beef in a smoker or grill using cherry wood, maple, or another wood of your choice. If you have a large cut of meat, smoking pastrami will take hours, as you need to smoke it for 1 hour per pound.

You can also steam pastrami to make it tender.

As far as the preparation of roast beef is concerned, everything is quite straightforward. You simply take the right cut of meat and roast it. Unlike pastrami, you need only a couple of hours to make roast beef.

The first thing that probably comes to your mind when thinking of pastrami is the classic pastrami sandwich. The latter represents slices of pastrami served between two slices of rye bread.

Another classic way of serving pastrami is the Reuben sandwich. Originating in the US, this grilled sandwich includes pastrami, cheese, brown or rye bread, and a few other ingredients.

Aside from sandwiches, pastrami is used to make a variety of dishes. You can use pastrami to make a salad, pizza, tacos, pasta dishes, etc.

While pastrami can be eaten both hot and cold, many people claim that hot pastrami tastes much better.

The traditional and British way of serving roast beef is as Sunday roast. It consists of slices of roast beef, roasted vegetables, and Yorkshire pudding.

Roast beef sandwiches are also popular. The beef on weck sandwich made with roast beef is particularly popular in Buffalo, New York. It is made up of thinly sliced roast beef served in a kummelweck roll.

In the Reuben sandwich, the main ingredients pastrami is paired with are sauerkraut, cheese, and Russian dressing. The latter is a combination of mayonnaise, ketchup, and a few other ingredients.

We have whole article dedicated to what goes best with a pastrami sandwich.

Pastrami goes well with eggs and asparagus. Thus, it can make a good addition to your breakfast table. It can also be served as a separate meat course where you would accompany pastrami with coleslaw, potatoes, cheese, etc.

As for roast beef, there are numerous options for pairings.

Roast beef is most often served with vegetables. Potatoes are a classic choice and you can make them in a number of ways.

If you want a true English dinner, serve roast beef with Yorkshire pudding and a ladle of gravy to top the meat. As for condiments for sandwiches, roast beef is often accompanied by mustard and horseradish sauce.

It is best to keep pastrami in the fridge to prevent bacteria growth. Wrapped in a plastic wrap or foil, pastrami will last up to 5 days in the fridge.

You can freeze pastrami to extend its shelf life for up to 3 months.

Roast beef doesn’t differ much from pastrami when it comes to its shelf life and conditions you should keep it in.

Once cooked, roast beef cools down, you shouldn’t be keep it at room temperature for more than 2 hours.

Stored in an airtight container or tightly wrapped in foil, roast beef will keep for around 4 days in the fridge. You can also freeze roast beef to keep it fresh up to 6 months.

Both pastrami and roast beef should be discarded if they smell off-putting or develop a slimy surface.

Are Pastrami and Roast Beef Both Deli Meats?

If you don’t know what deli meats are, they are pre-cooked or cured meats that can be eaten both cold and hot.

They are also known as lunch meats and are widely used in making all kinds of sandwiches and wraps. Deli meats are usually served sliced.

Both pastrami and roast beef are some of the most popular cold cuts (deli meats) used cold in sandwiches and other dishes.

Which One Is Healthier?

Both pastrami and roast beef are low in calories and fat. This makes them better options if you are choosing among different kinds of deli meats.

However, pastrami doesn’t exactly fall under the category of healthy meal options, especially when served in big sandwiches along with other ingredients and condiments.

Roast beef is similar if it is served in bread with such additions as ketchup, mustard, cheese, etc.

If you are choosing between roast beef and pastrami looking for a healthier meal option, eat roast beef with a side of vegetables. Compared to pastrami, roast beef is much lower in sodium.

A few slices of smokey pastrami served in rye bread may seem boring to some, but this is not only delicious but a relatively healthier option for lunch.

If you want to add mustard, opt for a home-made one so as not to add excess sodium to your diet.

Up Next: The 5 Best Cooking Wines For Beef

The 7 Best Substitutes For Havarti Cheese

Should You Always Put Water In A Crockpot?