The Difference Between Cumin And Coriander 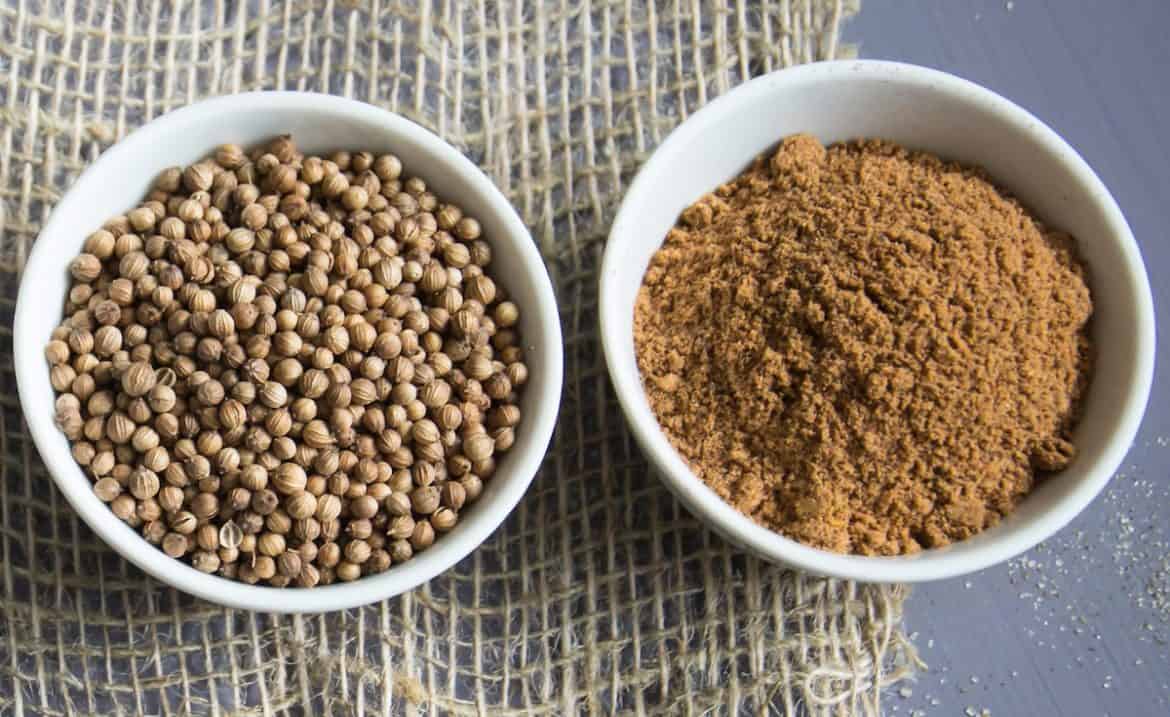 Cumin and coriander are considered complementary spices and they’re so frequently used together in recipes that it can be difficult to tell the difference between them.

When used on their own, it becomes obvious that they’re each quite unique and have many interesting benefits of their own.

There are a few similarities between cumin and coriander, but many more differences. In this article, we’ll look at the defining characteristics of each spice so you can always be confident that you’re reaching for the right ingredient for your recipes. Let’s start by learning a little bit about each individual spice.

If you love good spices and seasonings, be sure to check out our article on the best spice racks!

Cumin is a herb, a flowering plant, whose seeds are used for flavoring food.

It’s native to the Middle East and is used commonly in the cuisines of this area, but also makes regular occurrences in the food cultures of many other areas of the world as well.

One of the most common questions around this spice is, funny enough, how to pronounce the word itself.

Jeera, or Jeerakam, is the Hindi word for cumin and it’s often referred to as such, particularly in reference to jeera water, which is essentially a cumin tea that is very popular as a weight-loss beverage.

Coriander is an herb where all the parts, from the seeds to the leaves are used.

Depending on where you are in the world, you may refer to fresh coriander as cilantro or Chinese parsley.

It’s actually related to parsley and is also part of the carrot and celery families.

Coriander seeds, known as Dhania in Hindi, are commonly mispronounced, with the emphasis being on the “co” as in “co-op” sound, whereas it is properly more of a “caw” sound. Caw-ri-an-der.

No matter how you pronounce it, most cooks will know what you’re referring to. The seeds are commonly used both whole and ground, and they’re a wonderful addition to your staples spice rack.

Once again, we are fans of McCormick’s organic line of spices, especially the organic coriander seeds.

Cumin and coriander are both used widely and frequently in Indian cuisine, and their flavors complement each other perfectly, so they’re often used together in recipes.

When used individually, however, they can each bring unique flavors to your meals and they stand quite well on their own.

Do Cumin and Coriander Taste the Same?

Cumin and coriander taste quite different, actually. Both have a certain earthy flavor which is common to many spices, and they may add a hint of heat to your recipe, but that is where the vague similarities end.

Cumin has an almost smokey, nutty flavor that sometimes hints at citrus to the point of being ever-so-slightly bitter.

Aside from curries, it’s commonly used in chili and other Latin American cuisines to give a bit of smoke and heat to the meal.

Coriander seeds, on the other hand, have a lighter, brighter flavor that can be described as something between citrusy and floral. The flavor is deeper when the seeds are ground, and the powdered form has a nuttier edge to it.

Do Cumin and Coriander Look the Same?

Cumin and coriander seeds look completely different as well. Cumin seeds are long and narrow, almost like a tiny, pointed grain of rice. They’re light to medium brown in color and have lighter stripes running the length of them.

Coriander seeds are almost completely round, though they’re slightly pointed on one end and have a tiny nub where they attached to the stem of their plant on the other end. They’re also light brown, but more yellow-ish in color.

Nutritional Benefits of Cumin vs Coriander

Both spices are impressive in the number of nutrients they can pack into such tiny seeds. The following charge compares the basic nutritional information between the two.

As you can see, they’re both fairly high in vitamins and minerals, but cumin is particularly impressive in the iron content whereas coriander is a fiber powerhouse. They work together well in flavor and nutrition, so don’t hesitate to use them together in all your recipes to maximize the nutritional benefits of both together.

They have individual health benefits as well, which we’ll look at next.

Cumin is thought to be one of the healthiest spices you can add to your meals and it’s been used as a medicinal plant for generations in traditional medicine.

Most commonly it’s used to improve digestion by increasing the activity of digestive proteins or enzymes in your gut, helping you better process fats and other nutrients.

Cumin is also an incredibly rich source of iron, which is one of the most common mineral deficiencies and it’s notoriously difficult and potentially even dangerous to supplement. Getting it naturally from a diet spiced with the delicious flavor of cumin is a smart and healthy solution.

It also has antibacterial properties, which is not only good for your health, but it also makes cumin a common ingredient in combined flavorings and spices as it has been shown to reduce the frequency of food-borne illnesses.

As with most plants, it also has a wide variety of vitamins, minerals, and antioxidants to support your overall health.

Similar to cumin and other plants, coriander has a veritable selection of nutrients and antioxidants that can protect the health of your heart and improve your metabolic system, among other general health improvements.

Also similar to cumin, coriander has many digestive benefits and is also highly antibacterial. It has been found useful in cases of IBS as well as UTIs and other infections.

Specifically, coriander has been studied for his ability to enhance brain health thanks, it seems, to its anti-inflammatory properties. It’s being considered as a possible treatment for everything from anxiety to Alzheimer’s disease.

Cumin and Coriander: A Partnership

We’ve looked at many of the ways cumin and coriander differ, and now it’s time to consider how these differences can act in harmony together, developing a delicious and nutritious flavor combination for many of your recipes.

Cumin and coriander go together so well that many cooks in the know will create their own blend of powder, merging the two for easy application in all their future recipes.

You can either mix together pre-ground spices in equal measures, or you can enjoy the entire process of roasting, grinding and blending for yourself.

You’ll need about 3 tablespoons of each, cumin seeds and coriander seeds. Add them to a frying pan, no oil or water necessary, and heat them over very low heat until you can begin to smell their smoky, fragrant aroma. Usually, this takes only a few minutes.

Once they’re lightly roasted, you can either use a petal and mortar to grind them yourself or, more likely, simply add them to a food processer and blend until a fine powder is formed.

You can transfer this blend into a spice jar if you have one available, or simply any airtight jar or container.

The combination of cumin and coriander is seen most frequently in Indian dishes such as Chana Masala, Aloo Gobi, Palak Paneer, Rogan Josh and, of course, samosas. These two spices can be put to great use in many other recipes as well.

Here are a few ideas for you to consider:

Are cumin and turmeric the same thing?

No, cumin and turmeric are very different spices. Cumin, as we’ve discussed in this article, are seeds using for flavoring, whereas turmeric is a root that looks very similar to ginger. They’re both common ingredients in Indian and Middle Eastern cuisine.

When they’re ground, cumin is a light brown in color with an orange tint whereas turmeric is bright almost neon yellow, a color that it is well known for.

Are coriander and cilantro the same thing?

Coriander and cilantro come from the same plant, yes. In most of the Americas, the fresh green leaves are called cilantro, whereas Europeans are more likely to simply say fresh coriander. In both cases, the dried or ground seeds are called coriander.

What are the best substitutes for cumin and coriander?

Cumin and coriander each have unique flavors, so they should be substituted with different ingredients, if necessary. Depending on your recipe, cumin can usually be substituted for either caraway seeds or chili, to taste.

Coriander seeds would be better substituted with fennel seeds, though these also have a distinctive flavor or cardamom seeds. In both cases, use the substitute carefully as you’ll probably require less than you would coriander, which is a very light flavor.

The Difference Between Fennel And Dill

Is Cheese A Condiment?

Noodles Vs Pasta – What’s The Difference?

Oranges Vs Mandarins – What’s The Difference?

Is Lemon A Fruit Or Vegetable?

Thank you for this great info. It’s wonderful to have this info all in one place. I’ve never worked with whole cumin seed but have with coriander. I’ll be exploring more of your site, thanks again.