7 Best Substitutes For Cilantro In Salsa 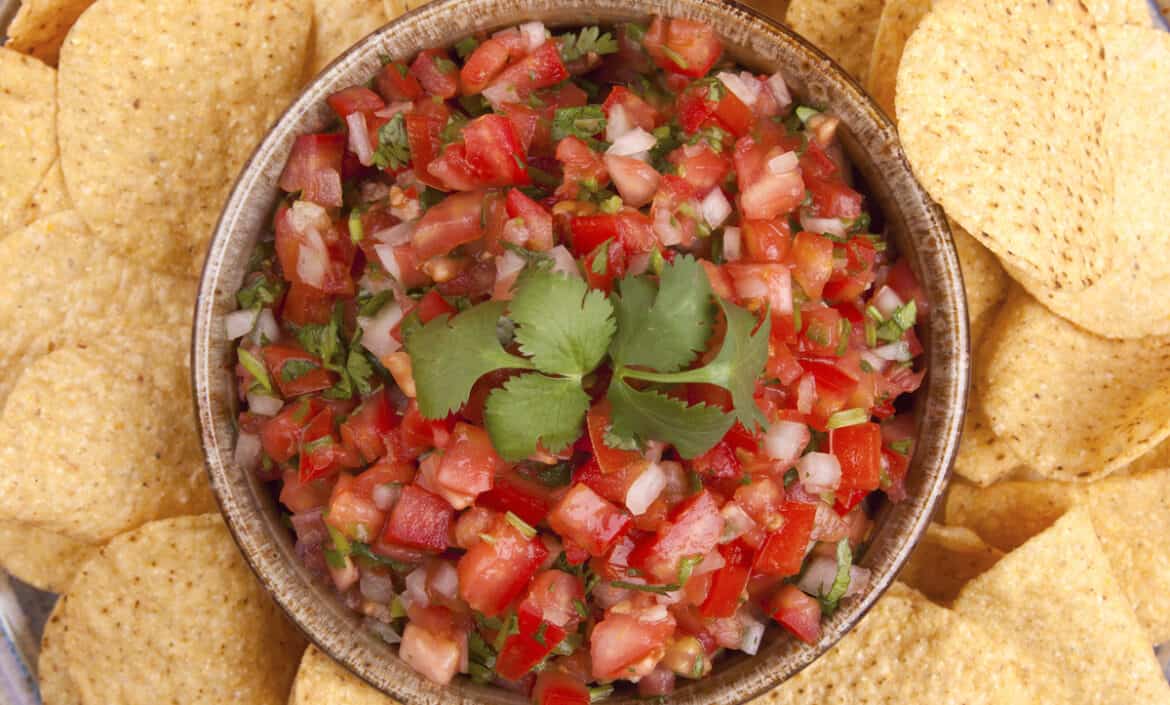 Cilantro is one of those flavors that people tend to either love or hate. If you fall into the hate camp, you have probably searched high and low to find substitutes for your favorite recipes that don’t include cilantro as the star herb.

If you’re in the mood for homemade salsa and either don’t like or don’t have cilantro on hand, you may be searching your kitchen asking yourself, “what can I use instead of cilantro?”

Each of these ingredients will add something unique to your salsa, and some pair well with specific additional ingredients.

In this article, we’ll explain how best to use each of the 7 best substitutes for cilantro in salsa.

Cilantro, also known as fresh coriander or coriander leaves, depending on where you live, is one of the most common herbs around the world. It grows easily and the entire plant can be used for flavoring and spicing food.

Cilantro leaves, on the other hand, are used commonly in fresh preparations, and are popular in South and Southeast Asian and Latin American cuisines, like salsa, guacamole, and as a garnish for soups and salads.

7 Best Substitutes for Cilantro in Salsa

Some people have a very unique genetic trait that makes fresh, green leafy cilantro taste foul or like soap. It’s not incredibly common, but enough people dislike the flavor of cilantro to search for substitutes.

Next, we’ll outline our favorite cilantro alternatives for salsa, specifically.

Parsley is a bright green leafy herb similar to cilantro in appearance and somewhat in flavor. The two herbs are basically cousins, so they can substitute for each other well, though not exactly.

Parsley is a little more bitter than cilantro and has a very slight peppery bite to it, but otherwise, they’re very similar.

It doesn’t have the citrus notes of cilantro, but a spritz of lemon or lime juice with your parsley makes it a very close flavor comparison.

Parsley on its own can have a flat flavor, though it’s very good at bringing out the flavors of other seasonings.

Including parsley with any of the other greens on this list will help enhance their flavor, which is very useful if you don’t have quite enough of any one ingredient to fill out your salsa perfectly.

Before you move on, hear us out. Don’t go away thinking that if you add mint leaves to your salsa it will end up tasting like spicy toothpaste.

Mint makes an interesting substitute for cilantro in salsa. Salsa is traditionally a spicy condiment and the addition of mint brings a cooling factor that will give your tastebuds a welcome respite.

Mint is a slightly sweet herb and the menthol adds a burst of freshness that contrasts nicely with the peppers. It especially goes well with mango salsas, as the sweetness and freshness play nicely together.

Mint in your salsa tastes nice with some ground coriander seeds as well, which add warmth and some of the citrus flavors that you might miss without actually using cilantro leaves.

Note that mint leaves tend to pair better with lime than lemon when it comes to salsa.

Basil is best known for being the signature ingredient in pesto, but it performs well as a substitute for cilantro in salsa as well.

Basil has some of the same freshness of mint, a little of the pepperiness of parsley, and it even brings in some of the citrus elements of cilantro, but it has all this wrapped up in a touch of sweetness.

Because of its sweetness, basil works really well with fruit salsas. A simple tomato salsa will be elevated with basil, but adding mango, peach or strawberry is even better.

Chives taste very different from cilantro, but they’re perfect for salsa because of their fresh green color and bright, slightly hot onion-garlic flavor.

Salsa tends to contain both of these ingredients as well, so chives enhance the flavor even more while making the dish look even more appetizing at the same time.

Adding avocado to your salsa along with chives adds a creamy contrast which balances out the powerful flavor nicely.

Green onions, or scallions, are also a great substitution for cilantro in salsa, for all the same reasons as chives.

The added benefit to using green onions instead of chives is that you can also use the bulb to either add to or replace some of the onion in your recipe, even though the green leaves are usually slightly milder in flavor than chives.

There are differences between chives and green onions, but for salsa purposes, they’re interchangeable.

If you’re using green onions in your salsa, always have some sour cream on hand as well, as the flavors pair well together. The bright, slightly tart freshness of the sour cream tempers the pungency of the onions.

Dill is closely related to parsley, but it has a taste all of its own. Dill pickles are the biggest claim to fame for this herb, though it is a very versatile feathery green herb.

There are two unique and delicious ways to use dill as a substitute for cilantro in your salsa:

Dill also pairs well with mustard, so adding just a few crushed mustard seeds or a pinch of ground mustard powder will bring even more depth of flavor to your salsa.

Carrot greens or tops are one of the most underutilized vegetables we can think of. Very few people even realize they’re edible, let alone know what to do with them.

Adding to them your next salsa as a substitution for cilantro is a great way to try them out.

Carrot greens taste similar to parsley, but with a lot of the carrot flavor from the root as well. They’re slightly sweet, a little bitter, with the earthy, grassy flavor common in many leafy green herbs.

Carrot greens are more bitter than cilantro, so if you don’t love the bite, try using your salsa as a condiment for simple or starchy food, like roast potatoes or chicken.

You can also serve it with something that has a natural sweetness to it, like corn on the cob.

Below, we’ve put together a chart to sum up each of the substitutes we’ve just listed and give you a better understanding of which substitute pairs well with which ingredients.

Are Cilantro and Coriander the Same Thing?

In many parts of the world, cilantro is called fresh coriander. Cilantro, as we know it in North America, is the leafy green herb that grows from coriander seeds.

When we refer to cilantro, we mean the leaves of the plant.

Coriander, as we know it, comes from the same plant, but this name is usually used to refer to the seeds of the plant ground into a spice.

Coriander and cilantro come from the same plant, so they have a similar flavor profile, but there are significant differences as well.

Cilantro is the leafy green part of the plant which has a citrusy, slightly bitter flavor and a very fragrant, herbaceous aroma.

Coriander, on the other hand, is a spice that adds warmth and nuttiness to a dish. The seeds do have the signature citrus undertones, however.

If you’re unlucky enough to be one of those who thinks cilantro tastes like soap, you may or may not find the same is true for coriander.

It is a genetic trait, and, depending on your sensitivity to the flavor, you may find that coriander is quite delicious, even if you hate cilantro. Unfortunately, you won’t know for sure until you try it.

What Is a Good Substitute for Ground Coriander?

Despite being different parts of the same plant, cilantro is not a good substitute for coriander.

They are used in very different recipes. Instead, try substituting cumin for ground coriander. They are both ground spices, and cumin has a similar citrus note to it, though it is a bit smokier in flavor than coriander.

Caraway, or fennel, is another very similar spice to coriander and can be used as a substitute, though it has a slightly sweeter undertone.

Up Next: Can You Freeze Salsa?

Can You Refreeze Hot Dogs? – Is It Safe?