Home Cooking Tips What Does Cheesecake Taste Like?
Cooking TipsFoodsguy 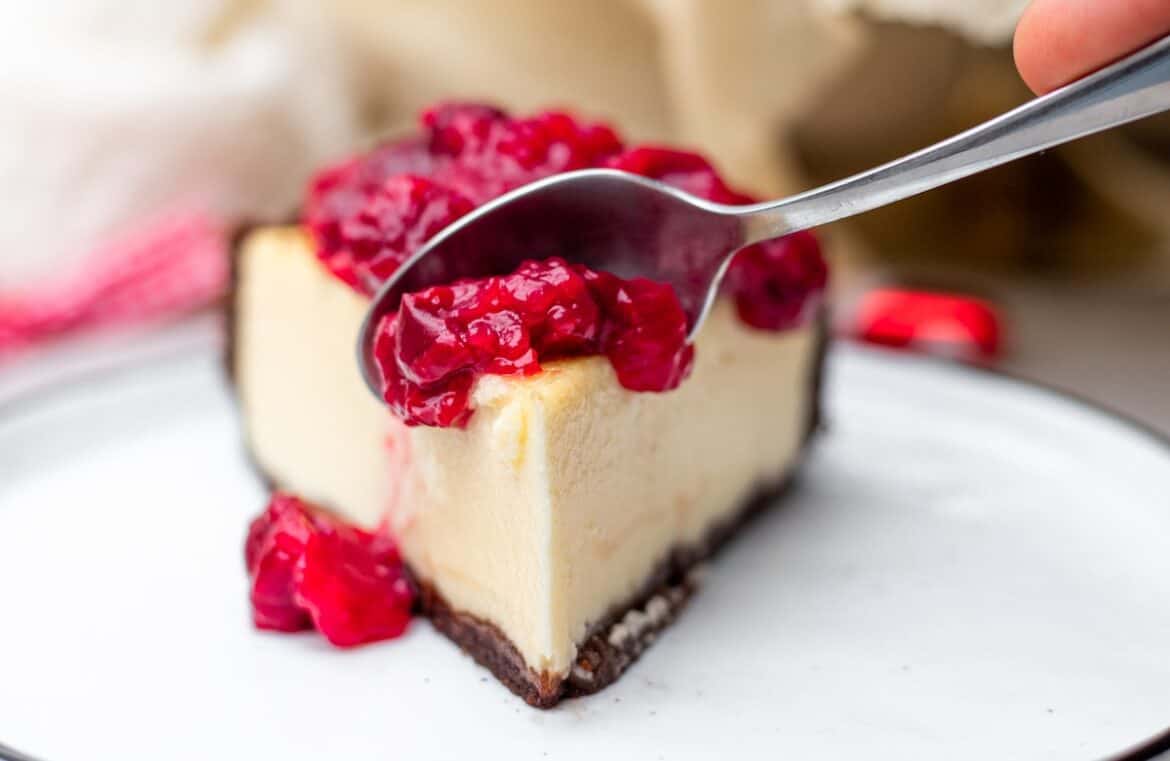 Cheesecake is an incredibly popular dessert, and for good reason! It has a unique taste unlike any other dessert, and can be enjoyed cold, warm, with toppings or without – it is wonderfully versatile!

If you have never tried cheesecake before, and are put off by the word “cheese” in the name, you are probably a little curious.

What does cheesecake taste like? Cheesecake has a unique taste. It tastes very similar to cream cheese, which is one of the main ingredients, but also has a sweet flavor with some tangy notes. The base of a cheesecake adds to the taste as well, depending on what it is made with.

You can also get different types of cheesecake, baked or unbaked, and various flavors as well. Read on to find out more on what cheesecake tastes like, and what it shouldn’t taste like to know if yours is still okay to eat!

The Classic Taste Of Cheesecake

The taste of cheesecake is distinctive, and if you closed your eyes and took a bite, you would know what it is straight away.

One of the main ingredients in cheesecake is cream cheese, so the dessert takes on a lot of its flavor from this. However, it is sweetened with sugar, and this sweetness balances out the sharp flavor of the cream cheese.

Cheesecake also has a definite tangy taste to it as well, but all of these flavors are balanced together beautifully to create a well-rounded dessert. The ingredients create a rich and creamy texture and taste, which melts in your mouth.

When discussing the taste of cheesecake, you also need to consider the base it was made with.

A popular base for cheesecake is digestive biscuits or graham crackers crumbed and added with melted butter, which adds to the richness of the cheesecake, but with a delicious biscuit flavor that compliments it perfectly.

Cheesecake is delicious, but the tanginess is not always to everyone’s taste. There are also many different flavors of cheesecake, so if the traditional cheesecake isn’t for you, maybe a salted caramel or fruity one would be!

Some people consider cheesecake to have a sour taste, but this isn’t exactly the right word to describe it. Cheesecake definitely does have a tangy taste to it, but it isn’t sour.

This tangy taste comes from the cream cheese used to make the cheesecake, and which is where the name cheesecake actually comes from. There is no cheddar or Gouda in this sweet treat!

When baking cheesecake, the tanginess does become slightly more pronounced, but it is balanced well with the other flavors. No-bake cheesecakes are a little less tangy, so are also worth a try if you are nervous to try the full experience.

The toppings or fillings used to make the cheesecake will also depend on how ‘sour’ or tangy it tastes. Some toppings and fillings do well to even out the tangy flavor, whereas others, such as lemon, bring it out a little more.

The tanginess of cheesecake also adds to the fresh taste, which makes it a great dessert to enjoy during the warmer months!

Whether the tanginess of cheesecake is something you enjoy is up to you, but there are definitely varying levels of tanginess to choose from between different cheesecakes, so you will be able to find one that suits your tastes best!

It can be quite a tricky dessert to get right, but if done properly, New York cheesecake is rich, creamy, smooth, and absolutely delicious. It is most commonly served as-is, with the traditional flavor, but there are other variations that people enjoy.

It is made with a biscuit and butter base, cream cheese, sugar, and fillings and flavors. The ingredients need to be combined together and laid onto the biscuit base in a springform and left in the fridge to chill and set.

If you’re interested in trying it out, we have a recipe for no-bake ricotta cheesecake that’s sure to knock your socks off!

The beauty of no-bake cheesecakes is that you can add so many different fillings, flavors, and toppings to them to give them just about any flavor you want.

Is There A Cheesecake Flavor?

Cheesecake is a specific flavor and is used as a flavor for many different treats. Some of the most popular cheesecake-flavored items include ice cream, yogurt, cakes, cookies, pastries, and donuts.

If it’s something sweet, there is a good chance there is a cheesecake-flavored version!

Cheesecake as a flavor tastes tart, sweet, creamy, and tangy! A popular flavor is also strawberry cheesecake, which seems to be quite a common yogurt and ice cream flavor, and which has the same sweet tanginess, but with fresh strawberry notes.

What Different Cheesecake Flavors Are There?

There really is no limit to what flavor cheesecake you can make, it all depends on what you like! Some popular cheesecake flavors seem to work better than others though.

Whether you want to make a baked cheesecake or a no-bake cheesecake, here are some flavor ideas:

If you can top it on the cheesecake, or incorporate it into the filling, then anything sweet or tart is fine to use as a flavor for cheesecake, so you can get quite creative!

We even have a recipe for kiwi cheesecake that will open your eyes to a whole realm of possibilities.

As a quick tip, you don’t want to leave your cheesecake out overnight. It should always be refrigerated when you’re not serving it up.

The taste should be your last telling sign if cheesecake has gone off, as you would want to know before you put it in your mouth.

The cheesecake will also begin to leak liquid, and this will cause the base to become moist, so make sure to look for this as well.

You might also notice an offputting smell from cheesecake that is going bad. It will smell like strong cream cheese, with sour notes as well.

If you cannot notice any of these signs, you will definitely know that a cheesecake is off by tasting it. It will not have the delightfully sweet and tangy taste that you would have expected. Instead, the cheesecake would be sour and have a rancid taste.

If it tingles in your mouth and has notes of acidity, throw the cheesecake away. As it contains dairy products, there is a chance you might contract a foodborne illness by eating cheesecake that has gone bad.

If you’re just trying to tell whether you’ve cooked your cheesecake enough, we have another article on undercooked cheesecake for your consideration.

Cheesecake really is quite delicious, whether baked or not, and is something that everyone should try at least once.

The tangy flavor of the cream cheese, and the sweetness from the sugar, along with the rich buttery taste of the biscuit base, is just plain amazing!

Try out different flavors of cheesecake to see which one you like best, and why not try to make your own cheesecake at home?

How Can I Store Cheesecake?

It is best to store cheesecake in the fridge. You should keep the cheesecake covered in a container or with plastic wrap to avoid any excess moisture or any contamination from other food items in your fridge.

You can also freeze cheesecake, and it freezes really well. The best way to freeze cheesecake is to wrap it in plastic wrap, and then in aluminum foil or in a plastic freezer bag, with all the air squeezed out, for an extra layer of protection.

Cheesecake does not taste like the traditional cheese that most people would imagine, and this is because it is not made with a normal cheese such as cheddar or Gouda.

Instead, cheesecake is made with cream cheese, which is both sweet and tangy, and wonderfully creamy.

Can You Eat Warm Cheesecake?

You can eat cheesecake warm, and it is delicious when served warm! Baked cheesecake is best when served straight out of the oven and can even be topped with ice cream or cream for some extra creaminess!

Up Next: Cheesecake Without Cream Cheese