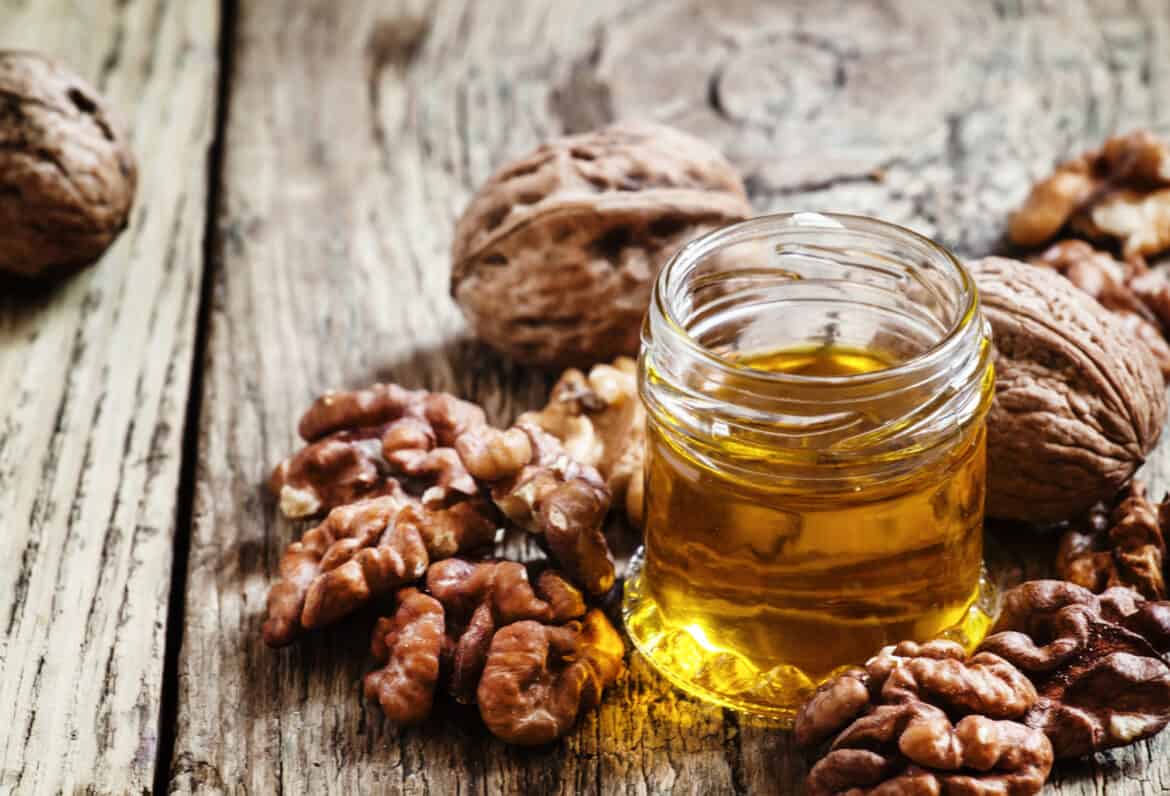 Walnut oil is a versatile and delicious flavoring oil that can be paired with many recipes. But if you don’t have it in the pantry, then there are several substitutes that you can try!

Read below to learn more about walnut oil, how its harvested, its characteristics, and some of its best substitutes!

What Is Walnut Oil?

Walnut oil is a great-tasting oil that is mostly used for pan frying, light frying, and flavoring purposes.

The best walnut oil is extracted by pressing fresh walnuts under manual hydraulic pressers, which are constantly cooled down to prevent the oil from overheating.

This process is called cold extraction and is commonly used to maintain the nutrients and flavors in the oil.

Other processes, that involve the use of solvents to get all of the oil out of the nut, produce a lower-grade oil.

The solvents in the oil are removed via heating, which greatly alters the flavor and nutrition of the oil, making it a less suitable option for healthy cooking.

Extra virgin or cold-pressed walnut oil is known for its many health benefits, mainly related to the skin, and is also enjoyed for its rich and unique walnut flavor!

Now that we’ve learned about how walnut oil is made, here are some of the characteristics that make it such a popular flavoring oil.

Walnut oil has a deep and rich, nutty yet buttery flavor with very subtle bitter notes. You can easily taste the walnut in the oil and it imparts the same flavor notes to whatever it is added to!

However, since walnut oil is easy to burn, it can turn bitter if it is heated at higher temperatures. This is why this oil doesn’t make for great deep-frying oil.

It can work well by imparting a rich walnut flavor to sautéed ingredients, but anything that requires a higher temperature will take on a distinctly bitter and burnt flavor.

Some oil producers may also roast the walnuts before pressing them, which adds a deep, nutty, and roasted flavor to the oil.

Walnut oil has a very smooth texture and is considered to be a relatively thin oil.

It has a pale yellow color and is usually clear of any debris or other particles. The oil also provides a very smooth mouthfeel and feels “lighter” due to its thinness.

When mixed with other ingredients, walnut oil adds a very mellow flavor to food without affecting the overall texture of the ingredients.

In salads, for example, it adds a buttery-rich texture and a thin oil coat over the veggies that dissipates as you chew.

As mentioned, walnut oil is mostly used as a flavoring oil that can be added as a garnish over any recipe. You can use the oil as a topping over salads, fish, and meat recipes.

It can also be topped over dessert dishes for an added walnut flavor.

Walnut oil has a low smoking point, which means that it can smoke at lower temperatures compared to other nut oils.

As stated, deep frying isn’t advised, but you can still lightly fry or sauté ingredients to add a nutty aroma and flavor.

The top reason why walnut oil is substituted is that this type of oil isn’t suited for all-purpose cooking due to its low smoke point.

While there are a few methods that can increase the smoking point of walnut oil, the extraction process that yields the highest-rated, unadulterated walnut oil is commonly only used for pan frying purposes.

Another reason why you might want to substitute it is because of allergens.

Walnut oil naturally contains compounds that may trigger allergic reactions. If you have ever reacted to this type of oil, then the good news is that you can easily use other similar oils in its place!

Now that we know all about walnut oil, how it’s made, and the characteristics that make it such an excellent flavoring oil — as well as why you might need to substitute it — here are some of our top substitutions!

Peanut oil is an excellent substitute for walnut oil because it provides more or less the same texture and an arguably better flavor.

If you aren’t trying to get a particularly walnut-like flavor, then we highly recommend that you try out peanut oil.

It can be used as a delicate flavoring oil and since it has a higher smoking point, it can also be used for deep frying too.

Fried chicken made in peanut oil is a great example of the flavoring capabilities of this oil.

Olive oil is a similarly nutritious and delicious seasoning/frying oil that can be used in a lot of ways.

Extra virgin olive oil is the go-to choice as it is also extracted using a cold-press process that preserves the delicate and natural flavor notes and nutrients of the olives.

Olive oil can be expensive, but it is perhaps the best oil all-purpose oil for cooking (pan frying) and flavoring.

Sesame oil goes great with a lot of Chinese recipes because it adds a nutty flavor that can pair well with any savory ingredient.

It might not be as nutritious as walnut oil, but it still packs a lot of vital micro and macronutrients.

We recommend using sesame oil for flavoring or light frying purposes. It is readily available and can be cheaper than other types of nut and seed oils.

Sunflower oil is a versatile cooking oil that is used in a lot of industries. Even though it has a very mild, nutty flavor, most people think its subtle notes are akin to walnuts!

If you don’t mind the rather neutral flavor of this oil, then we think it would make a fantastic substitute for walnut oil.

Not only can sunflower oil be used for all-purpose cooking, but it also packs a lot of nutrition, particularly vitamin E, which is known for its protective and anti-aging properties in cells.

Pumpkin seed oil is extracted using the same method as walnut oil, but it doesn’t have the same tolerances as walnut oil! This oil has a subtle, nutty flavor with hints of bitterness.

We recommend only using pumpkin seed oil as a flavoring ingredient. It has a very low smoking point and the oil can easily burn, even at lower temperatures, which would impart an overpoweringly bitter flavor.

The good news is that it is packed with nutrition and can be used in the same way as walnut oil.

Depending on the refinement process, grapeseed oil can either have a very light, nutty flavor or a mild, grapeseed-like flavor.

This type of oil isn’t suitable for frying purposes, but it can be used to flavor a lot of delicious recipes.

You can use grapeseed oil as a healthy substitute in homemade mayonnaise recipes. It can also be used as a great salad dressing too.

Not only is this nut oil loaded with nutrients, but it is also suitable for all-purpose cooking. It has a uniquely nutty, roasted flavor that can come through in any recipe.

It may be a bit expensive when compared to other oils on this list, but it is worth the money if you are looking for a great walnut oil replacement!

Canola oil is a very common vegetable oil that is readily available and cheaper than other cold-pressed oils.

It has a neutral flavor, making it the perfect oil for all-purpose use. It has a balanced nutritional profile and is considered to be a heart-healthy alternative.

You might not get a nutty flavor, but if you are in a hurry, then canola oil would make for a great last-minute substitute!

Vegetable oils are a group of oils derived from plants. This type of oil is commonly used for both commercial and home purposes. It has a mild flavor, just like canola oil, and can be very cheap too.

Since it is readily available and usually ubiquitous in every household, you can easily substitute it for walnut oil in some recipes.

It might not be a great dressing or flavoring oil, but vegetable oil can easily get the job done in the context of frying and baking recipes.

Now that you know all the best substitutes for walnut oil, here are some related questions.

Walnut oil, just like any other type of oil on the list above can go bad! Always check the back of the bottle for the expiration date and keep the oil away from heat and direct sunlight.

Oils can go rancid when they go bad — they have the potential to make you sick, too.

Can you use coconut oil instead of walnut oil?

Processed coconut oil can be used as a substitute for walnut oil, but we don’t recommend using the “virgin” or unrefined version.

Cold-pressed coconut oil can have a distinct coconut aroma and flavor, which can alter the overall balance of flavor in your recipes.

Pecan Vs Walnut – What’s The Difference?

Can You Freeze Walnuts? – The Right Way

The Best Substitutes For Sesame Oil

White Spots On Ham (Is It Safe To Eat?)