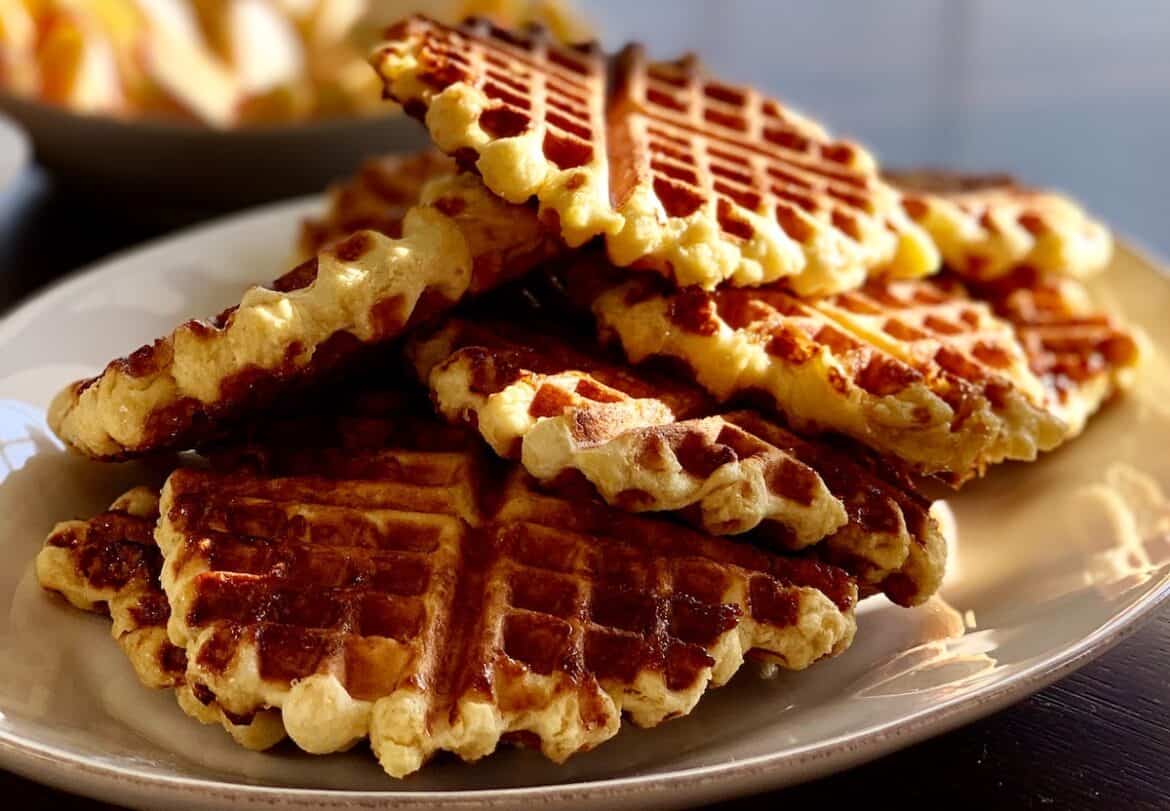 Waffles are a favorite of many families, whether they are for a classic breakfast or a treat after dinner. With the crispy crunch on the outside and the soft, chewy texture of the inside, waffles are really quite delicious!

Most waffle recipes require vegetable oil, but if you have run out at home, or if you don’t enjoy using vegetable oils in your food, what substitutes can you use?

What are the best substitutes for vegetable oil in waffles? Your options include coconut oil, extra virgin olive oil, butter, lard, low-fat yogurt, mashed bananas, or applesauce. These all give the waffles a certain taste and texture, but work well in place of vegetable oil.

Keep reading to learn which substitutes we recommend as a replacement for vegetable oil in waffles and why they work so well.

7 Substitutes For Oil In Waffles

Here are the 7 best substitutes to use in place of vegetable oil in waffles, and how you can use them in waffle recipes!

Coconut oil is a healthy alternative to vegetable oil. While it is the same consistency as vegetable oil when heated, it has more nutritional value.

Coconut oil does need to be stored at room temperature, as it does harden when exposed to cooler temperatures, and this could make it difficult to mix into a waffle mixture.

You are also able to use a coconut oil spray to stop the waffles from sticking to the pan – so you really do not need to use any vegetable oil at all.

When using coconut oil to cook waffles, your waffles will be crispier on the outside, but still tender and soft on the inside – just what you would want!

The Nutiva Organic, Unrefined Coconut Oil is a high-quality oil that has a pure, neutral flavor.

Fresh coconuts are cold-pressed straight after harvesting, which offers up a pure oil that has a light coconut flavor, without being too overwhelming.

Made from 100% young organic coconuts, you can be sure that you will be getting the best quality and nutritional value possible when using this cold-pressed, unrefined coconut oil.

This ‘extra virgin’ olive oil has a milder taste than others, so it does not add a strong flavor to the waffles, and it is the highest quality olive oil to use.

One thing to note when using extra virgin olive oil is that it burns at quite a low temperature, so make sure to not have the waffle pan too hot when adding the olive oil or waffle mix in.

Extra virgin olive oil does not just work as a substitute for vegetable oil in waffles alone, but it can be used in sauces, marinades, and salads.

The Colavita Extra Virgin Olive Oil is imported straight from Italy and is made from cold-pressed olives.

The cold-pressing process helps the olive oil retain all of its best nutrients and taste.

It is a flavorful, healthy alternative to vegetable oil, and works well as its replacement in many meals and baked goods.

Butter is found in almost all kitchens, which makes it an easy substitute for vegetable oil when making waffles. However, you need to use unsalted butter, so that your waffles don’t taste too salty when they are cooked.

It is not necessarily a healthier alternative to vegetable oil, but if you enjoy waffles as a treat every now and again, it is not too big of a deal!

It gives waffles a richer texture and taste, and you can taste the buttery addition.

If you are using salted butter, make sure to cut back the salt content in the waffle batter so that the waffle isn’t overly salty, and does not have too high of a sodium content.

Lard is a semi-soft white fat from certain meats, which is high in saturated fatty acids, but it contains zero trans fat.

Many cooks prefer using lard over vegetable oil, and even butter, as it has good nutritional content and it has a rich texture and taste.

Lard offers the same texture and taste to waffles as you would get when using vegetable oil, and it can be substituted the same, with 1 cup of lard replacing 1 cup of vegetable oil.

Lard would be a fabulous option for making chaffles.

This organic pork lard is non-GMO and perfect for those who are looking for organic ingredients to use in the kitchen.

The lard offers a rich flavor and taste, and helps to give a creamier texture to many items, and definitely does this when used to make waffles.

Kettle-rendered, this is a premium cooking oil that really will be a favorite in your kitchen!

Yogurt is a healthy food item, made by fermenting milk and other ingredients. The bacteria in yogurt helps to produce yogurt cultures, which are incredibly good for your health.

While you can make your own yogurt at home, most people choose to purchase tubs from the grocery store.

Use 1 cup of low-fat yogurt to replace 1 cup of vegetable oil when making waffle batter. You will have to reduce the liquid content of the waffle batter, whether that is water or milk, as the yogurt will add liquid to the mixture.

The yogurt will add a bit of a tangy taste to your waffles, but sometimes this only makes the waffles tastier!

If you keep bananas in the kitchen, you already have an easy substitute for vegetable oil in waffles! Not only are bananas cheap, but they are nutritious as well, and can help make some healthy waffles.

To use bananas as a replacement for vegetable oil, you need to choose very ripe bananas, which can be easily mashed or blended in a processor. You will not need to add in any sugar or water, as bananas have these naturally.

For 1 cup of vegetable oil, you can use a ¾ cup of mashed bananas. The waffles will have a banana flavor once cooked, but this is never a bad thing for breakfast waffles.

You can use bananas in place of vegetable oil when baking bread and cakes as well, as a healthier alternative, and to add more flavor and extra moisture to the baked goods.

The only caveat to making waffles with mashed bananas is that they might not be as tasty reheated since bananas tend to brown quickly.

Applesauce is made from fresh apples and can be made at home or bought bottled from the store.

Applesauce can be made from peeled or unpeeled apples, and can be plain or have added sweeteners and spices. It is cheaper and healthier compared to vegetable oil.

The flavor of the applesauce gives the waffles a sweet and fruity flavor, and you can even eat the waffles plain without adding in any other sweeteners on top.

If you have leftover waffles, don’t forget to freeze them.

Can I use peanut oil in place of vegetable oil?

Peanut oil has a neutral flavor, so it will not change the flavor of your food too much.

How much butter do I use in place of ½ cup of oil?

You should use around 1/2 cup of butter for ½ cup of oil. This does depend on the recipe. Butter can be used in place of oil in many recipes, but it does usually need to be melted in order to be worked into the recipe easily.

Can I use shortening in waffles?

Up Next: Light And Crispy Waffles Without Milk Recipe

Can You Freeze Lemons? – The Best Way