White Spots On Ham (Is It Safe To Eat?) 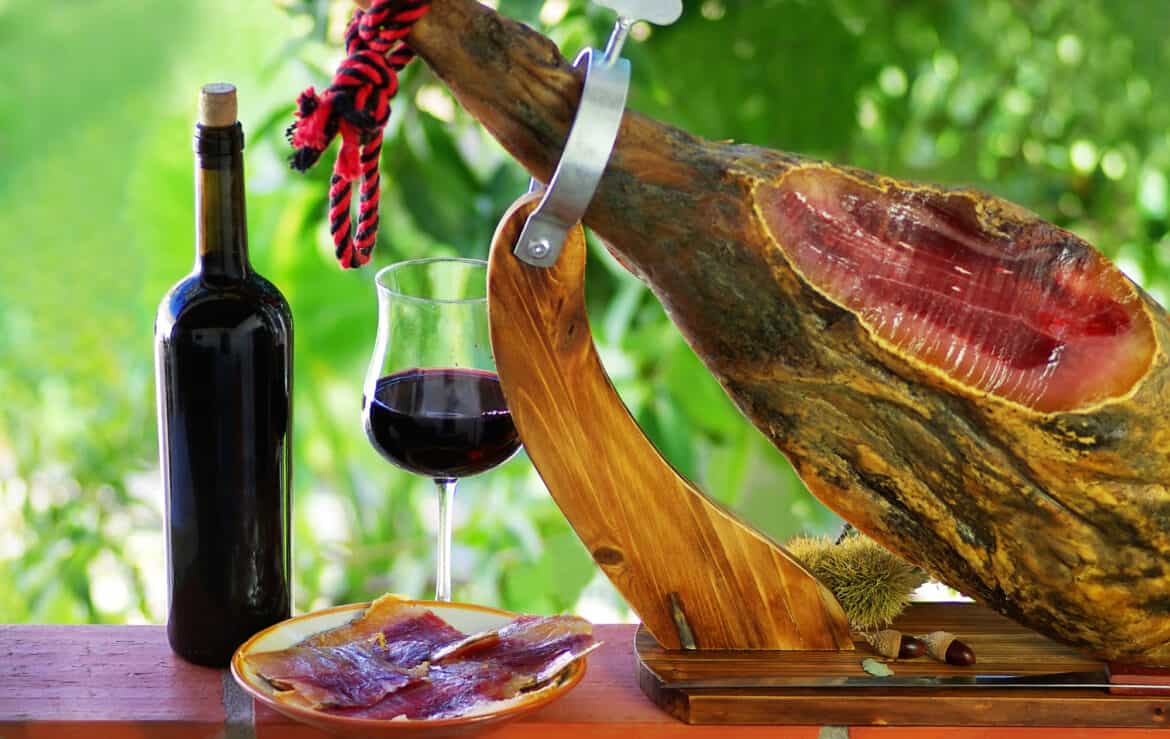 Notice multiple white spots on a recently bought piece of ham? It might not be what you think it is!

White spots on ham, is it safe to eat? White spots on cured ham are usually tyrosine crystals, which form during the maturation process when tyrosine amino acids clump up and form visible crystals around the meat. In this case, the meat is completely safe to eat. However, some white spots are signs of spoilage and are not safe to eat.

Read below to learn more about these mysterious white spots, some basic precautions, and how to tell good ham from spoiled ham!

In most cases, if you notice white spots on a recently purchased and properly stored piece of ham, then chances are that these spots are benign and the meat is completely safe to eat.

Oftentimes, these white spots are “tyrosine crystals” and are perfectly edible.

Tyrosine is an amino acid, a type of protein that can be found in abundance in mammals. These crystals can form as a result of the maturation (aging) process of the ham when tyrosine amino acids clump together in the meat.

However, some white spots are less benign and are actually a sign that the meat has spoiled and should not be eaten.

So, how do we know which white spots are safe to eat?

To understand the formation of these crystals, we must first explore the concept of curing meat and how it can force chemical changes within the ham to form these crystals.

Then, we will explore signs of spoilage that indicate that your meat should be discarded instead of eaten.

Curing is a natural preservation process that produces one of the tastiest types of food known to mankind — and all it takes is a few choice seasonings and a lot of careful monitoring!

It’s a process that is centuries in the making — and humans have nearly perfected it when it comes to curing meat.

In the case of most meats, you can go with either a dry or wet cure — both methods can develop white spots.

Wet curing usually requires a brine and seasoning injection. After the meat has been treated it is then hung in temperature-controlled rooms where they are then dried.

Dry curing begins with a balanced piece of meat. The butcher first cleans off excess fat, but keeps some of it on the ham to promote the drying process later.

During this stage, the meat will also show a fair bit of marbling if it were cut across. The cleaned meat is then rubbed with a special curing rub. This rub contains a large proportion of salt and other flavorings like sugar and spices.

The salt in the seasonings is the true hero here.

Salt has a very interesting property: it draws out moisture from ingredients — and if you recall basic biology, no moisture means no bacterial growth!

Salt creates an uninhabitable environment for harmful bacteria, this allows the meat to dry naturally without spoiling.

Once the salt mixture has been applied, the meat is hung or set to rest in a temperature-controlled environment.

After the initial rest period, it goes into a specialized casing and is then hung in a curing room where the meat sits for several weeks.

This is usually when the white spots begin to form!

As the meat matures, the proteins within start to break down.

This is an important step because it renders the meat fibers and allows it to take in more flavor. But a side effect of this natural process is the formation of these white crystals.

Tyrosine is a non-essential amino acid, which means that our bodies don’t need it from external sources because it makes it on its own.

The crystals can vary in shape and size, but are usually palpable and can also be bit into. They don’t provide any flavor, but they do have a distinct hardness or crunch.

Tyrosine crystals usually don’t come in the way of enjoying the meat, but in some cases, the crystals can form bigger chunks, which are more noticeable with dry-cured meat, since it is aged longer.

These crystals can also be found in fast-aging meat too! Some varieties of country ham and other cured ham products develop these crystals from wet and dry curing processes.

Is Ham With White Spots Safe To Eat?

As a general rule of thumb, if you recently bought or cured the meat at home using all the best practices, then there is a good chance that the meat is 100% edible.

Of course, there are exceptions to this rule. The meat also needs to show no visible or detectable signs of spoilage before it is deemed okay to consume.

See, in some cases, these white spots can also hint toward something far more nefarious!

Remember: cured meat can go bad in the right (or wrong) conditions, especially when it is already cut.

Here is everything that you need to look out for before consuming ham with white spots.

A perfectly cured ham will have a beautiful, even color around the exterior. The interior and cross-section of the meat should show the same characteristics. You should only see a pinkish color across the cross-section with slight marbling.

But if you notice anything out of the ordinary, then you might have to closely inspect the meat before consuming it.

If the ham shows green, gray, or darkish colors, then this could mean that the ham has gone bad. Please discard all of the meat and do not attempt to salvage it by cutting around the affected areas.

Tyrosine crystals can have a needle-like shape, but their shape is typically indeterminate, meaning that they can take on any shape depending on how the proteins are broken down and then rearranged during the curing process.

They have a subtly hard, crunchy texture that is more common with Iberian hams — but they can occur in virtually any meat product from mammals.

For added safety, look for slimy or overly soft/mushy textures around the area with white spots.

Tyrosine crystals don’t affect the texture of the meat as they form, so if you notice any mushiness or sliminess on the surface, then this would mean that the ham has gone bad!

Cured ham can give off a different odor depending on how it was cured.

In most cases, the smoked or dry-cured ham will have a delicious faint aroma to it. It will not smell off and you will not get varying odors from around the surface of the meat.

If you notice white spots forming on the inside, make sure that you smell the slice before consuming it.

Tyrosine crystals don’t smell like anything! So, if you get a foul odor from the meat, you should assume that it has gone bad!

Does having more white spots around cured meat indicate good quality? No!

Food scientists agree that the presence of tyrosine crystals in meat has no useful implication in the context of the quality of the ham.

However, they do serve the purpose of being “aging markers” for the meat because the crystals usually form at the peak of the curing process.

The crystals can form due to an abundance of amino acids, but studies have shown that numerous other factors can influence the formation of these crystals.

The quantity of salt, the type of seasonings, the aging process, and the maturing time itself can have a profound effect on the presence of these white spots.

So, if someone is trying to sell the meat at a premium because of these white spots, then you should probably shop elsewhere.

Needless to say, if you do find them in your ham, then you can be sure that the meat is completely safe to eat, so long as the ham doesn’t indicate any obvious signs of spoilage!

Finding white spots in meat can be quite alarming, but understanding the process of curing and the formation of these white spots can help alleviate all your concerns!

Now that you know if white spots on ham are safe, here are some related questions.

Can you remove white spots before eating ham?

Yes. You can use a plucking tool to individually remove the white spots from the meat, but this is usually not common practice and most people don’t mind consuming ham with the spots included.

The white spots should only be removed if you find a particularly large crystal that may come in the way of the natural texture of the meat.

Can you eat 3-year-old cured meat?

Ideally, you should always look at the storage indication and expiration date on the meat before consuming or even storing it for more than 6 months.

Most cured meats are supposed to be consumed within 3-6 months, but some varieties can be kept for longer.

Please note that cured meat will continue to age as it rests, which may dramatically (and negatively) affect its flavor and, more importantly, its texture!

Apples Are Red Inside (What’s The Cause & Are They Safe To Eat?)

White Spots On Cheddar Cheese – Is It Safe To Eat?

White Spots In Mango – Is It Safe To Eat?

Are Black Spots On Salmon Safe To Eat?

Can You Marinate Ground Beef?